Witt HTC, Panasonic, PancakeXR and other companies showing their Virtual Reality headsets at CES 2023, in Las Vegas, one question remains: how fast is the market for VR growing? 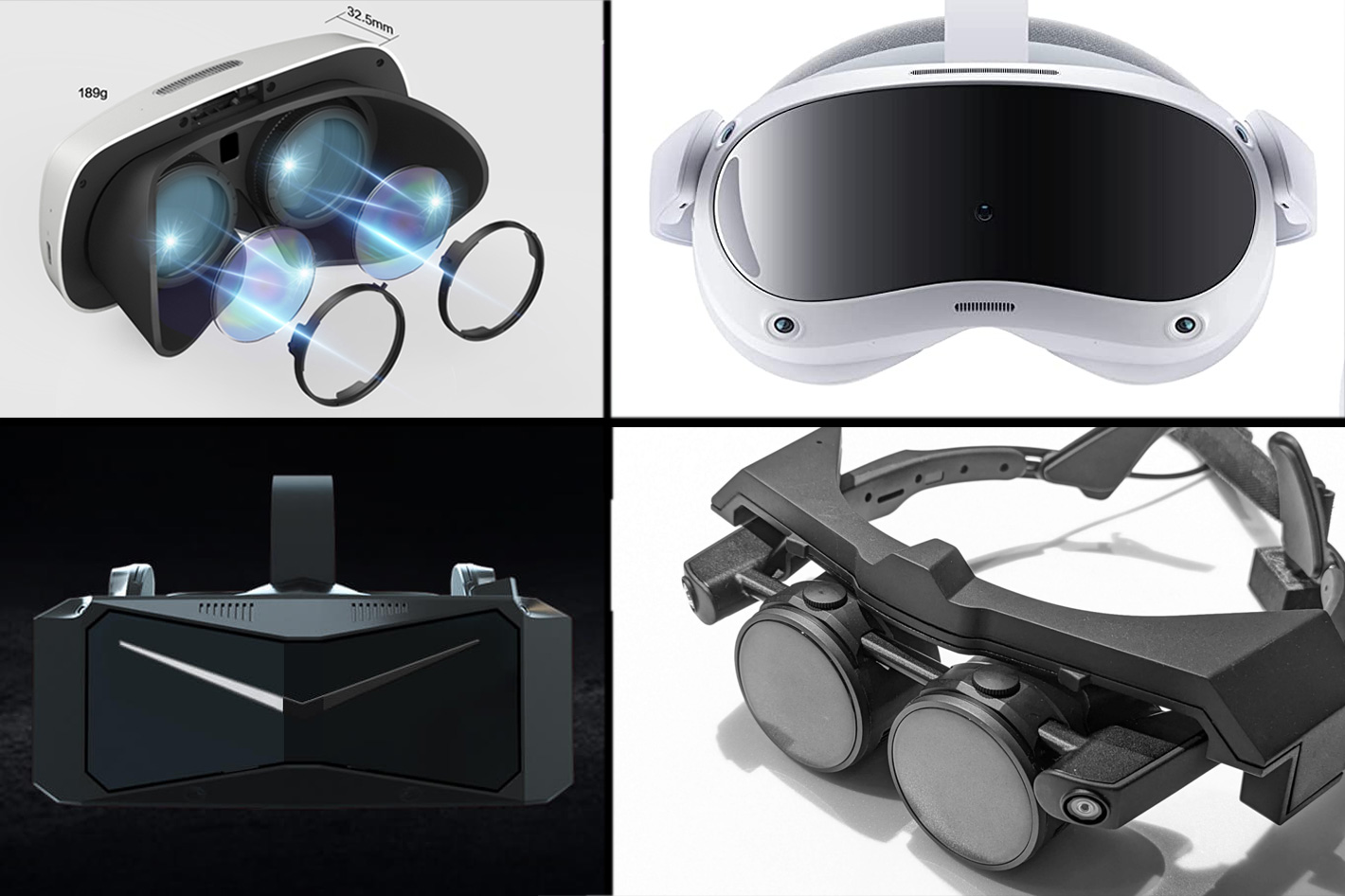 Although Hollywood has adopted VR for film production, we’re still a long distance from Virtual Reality being adopted by the public. A total of 61% non-users say they are not interested in trying VR.

Why is VR growth so slow despite its possibilities? That’s the question many ask and a report from 2022 created by Thrive Analytics and ARtillery Intelligence may have the crucial answers. A specialist in the field of VR, AR and XR, ARtillery Intelligence authored questions to be fielded through its established survey engine to more than 98,000 U.S. adults. The result is Wave VI of the research, and a narrative report published to unpack the results.

The key questions the report asked where simple and direct: How do consumers feel about VR? Who’s using it? How often? And what do they want to see next? Perhaps more importantly, what are non-users’ reasons for disinterest? And how can VR software and hardware developers optimize product strategies accordingly?

The numbers suggest that convincing people to try VR is a hard uphill battle. In fact, although 23 percent of households own or have used a VR headset, non-VR users report relatively low interest – 18 percent, according to the report, down from 20 percent in a previous report. Worse, the survey reveals, “is their explicit ambivalence towards the technology (“just not interested”). This downward trend is concerning, as public interest in VR continues to wane from its peak during the industry’s circa-2017 hype cycle.”

Meta dominance in VR does not help

In fact, when asking the same non-users if they are interested in trying VR in the next 12 months, the majority (61 percent) are not,  18 percent are interested, and 21 percent aren’t sure. The latter indicates that more education is needed. And this may be one of the problems with Virtual Reality. According to the report,  the disparity between current-user satisfaction and non-user disinterest underscores a key “chicken & egg” dilemma for VR. To reach high satisfaction levels, VR must first be tried. Yet non-users don’t want to try it, which presents a sizable marketing challenge for VR proponents to push that first taste.

Having followed the evolution of VR in recent years, after having tried it for the first time in the early 90s – of last century – I believe one of the key problems with Virtual Reality is the difficulty in showing people what’s possible to do with a VR headset. In that sense, the market domination by Oculus (now Meta) has not helped. Yes, the company may have funded some cultural projects in VR, but its core business in VR is gaming (besides a questionable Metaverse), and the Meta Quest 2, a VR headset sold below its cost to gain market share is not helping to make adults – and those who are not into gaming – gain interest for VR.

The report does indicate that price for the hardware is a key element and reveals that the “demand inflects when prices fall into the $200-$400 range and lower. This is notably the Meta Quest 2’s price range. In that light, this finding validates other evidence – and our market-sizing estimates – for Quest 2’s growth. It continues to hold a quality edge, aggressive price competition, and an accelerating VR market share.” 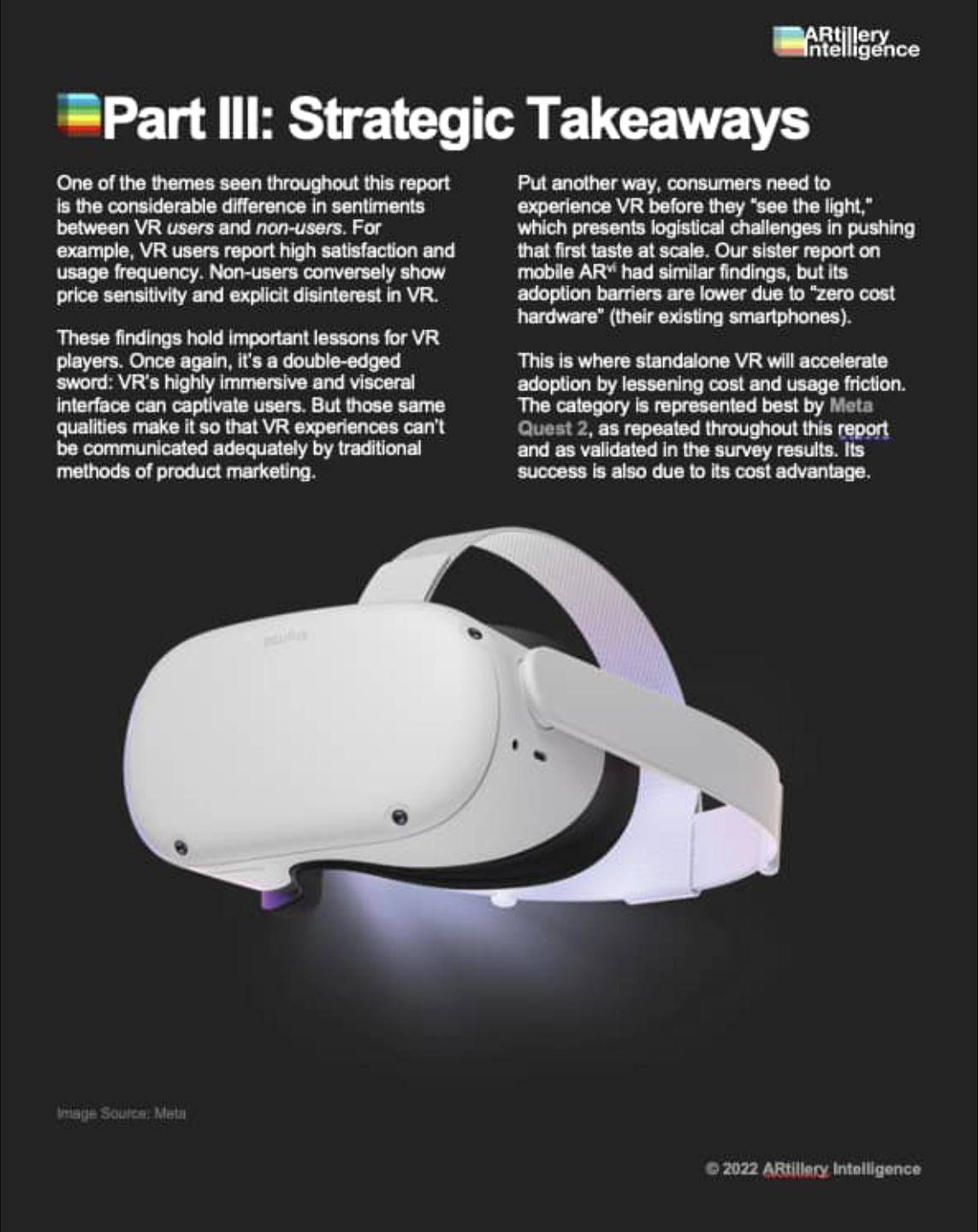 It’s also true that, as the report states, “standalone VR – embodied by Quest 2 – outperforms other categories. It specifically addresses many consumer objections to PC-based VR including cost, confinement, and setup friction. One exception is game console-based VR – namely PSVR – which has established a user-friendly persona.”

While PCVR is, for its cost of access, something that only some people will adhere to, the truth is that there is a segment of the market interested and able to afford the high price of entry, especially for flight  and racing simulation. But PCVR continues to be an area associated with a graphic quality not achievable with standalone VR headsets, although recent developments in lenses, Wi-Fi, video compression and decoding and the pure force of the most recent GPUs – meaning the RTX 4090 series from NVIDIA – help to close the gap. Still, with better lenses and graphics cards, tethered VR headsets will continue to lead the way.

There is no doubt, though, that standalone VR headsets, as the recent Pico 4, which is a better solution than the Meta Quest 2, may contribute to market growth, offering affordable alternatives to the public. With more standalone VR headsets – or AIO for All-In-One VR headsets – being announced at CES 2023, from HTC, Shiftall (Panasonic), PancakeXR and others – all we need to create a larger audience is to demonstrate that VR headsets can be used for more than long sessions of Beat Saber, a popular Meta Quest game that has made it to other platforms. 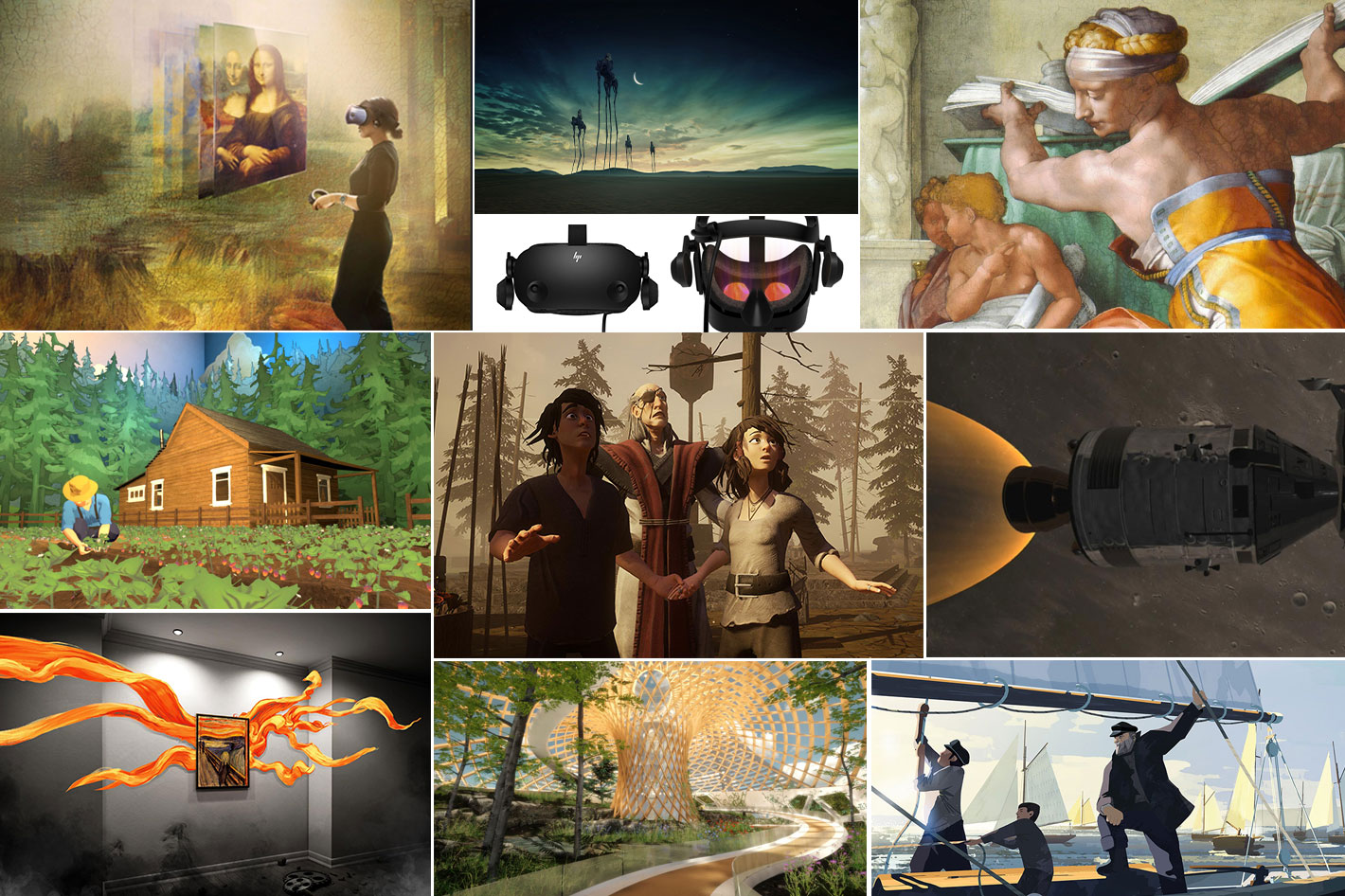 VR is more than games for kids

For the last couple of years, we’ve shared with ProVideo Coalition readers Virtual Reality experiences that clearly demonstrate that “VR is more than games for kids” and we will walk that path again in 2023, as more hardware and software is released. There are some exciting experiences available, and many of that library can be obtained at low cost or even completely free.

VR headsets, we’ve written before, allow you to watch movies in an IMAX size screen without leaving home, immerse yourself in experiences from a visit to a museum to walking on the surface of the Moon, experience an animated movie from perspectives impossible to experience in any other medium… and even try simulations that let you pilot and airplane, drive a fast F1 car or cross the galaxy in a spaceship. And yes, there are also games… besides being used in Virtual Production related to filmmaking, besides post production.

Standalone VR headsets are, no doubt, a key factor to expand the usage of Virtual Reality beyond games, but companies must find ways to allow people, those 61 per cent not interested, to try the greatest strength of the medium: immersion. But, as noted by the report, immersion is also its greatest weakness because the experience can’t be captured through traditional marketing. It’s like “selling TVs on the radio.” Setting demonstration booths that people can visit to try hardware and immerse into virtual worlds may be the way forward. 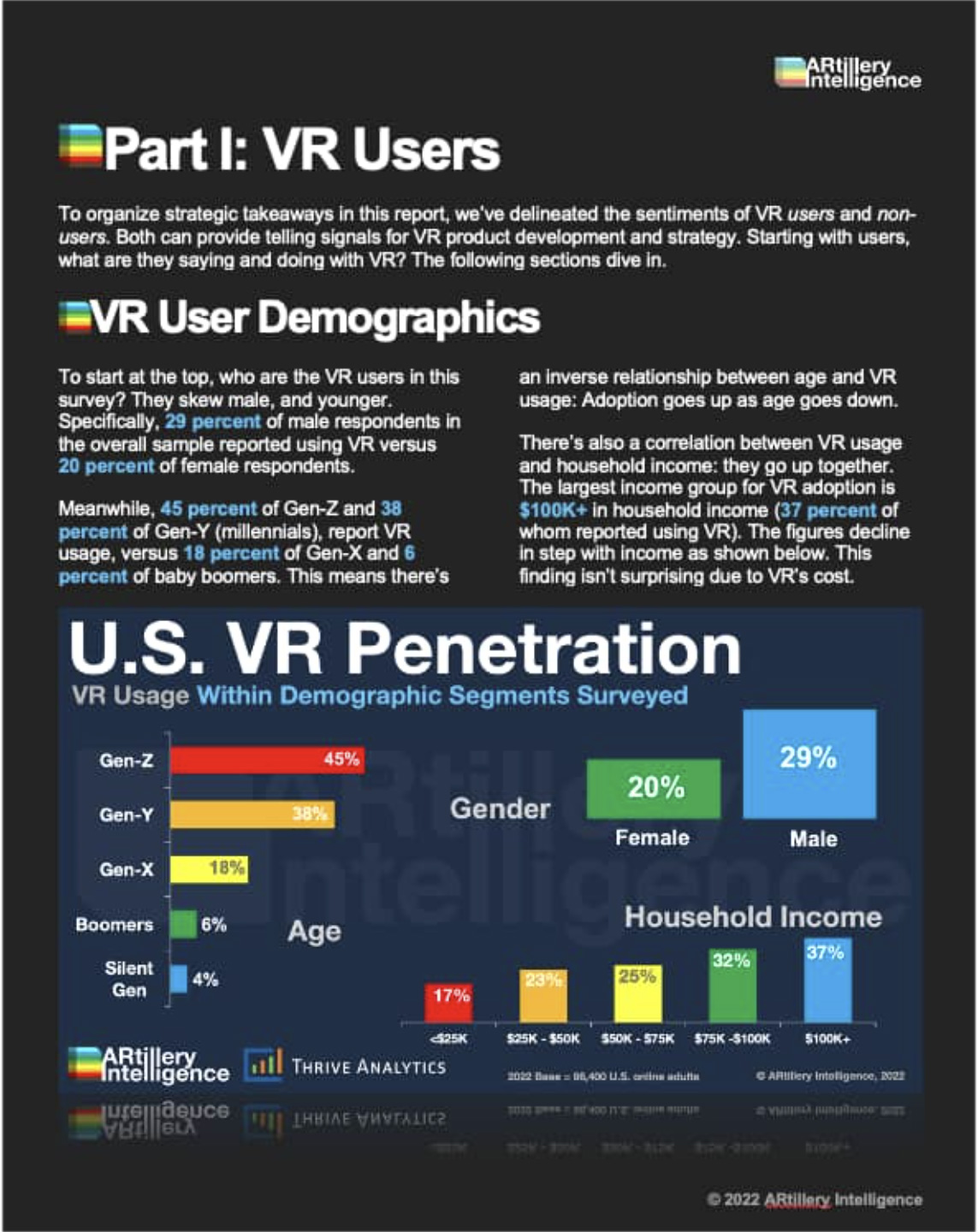 Titles that appeal to a wider audience

I don’t believe, though, that making the intended audiences play games will move the market forward. Neither will making them visit the multiple “metaverses” help. No, the real value of VR goes beyond gaming and the promise of modern “Second Life” worlds, it’s in the cultural jewels one finds in a variety of titles, some of which we shared with ProVideo Coalition readers before. There is a wide selection of themes to appeal to a wider audience,  but without ways to try them, non-users will continue to say they are not interested.

I’ve yet to find one person, from those who I’ve helped to discover Virtual Reality, that does not come out from the experience wanting more. I never make them play Beat Saber… In fact, I never played it myself, besides a VERY brief trial. But give me a good immersive experience and I am all in.