An interactive pilgrimage through an emotional geography of immigration and family to recover what was lost, The Book of Distance tells the story of a Japanese immigrant in Canada during II World War. 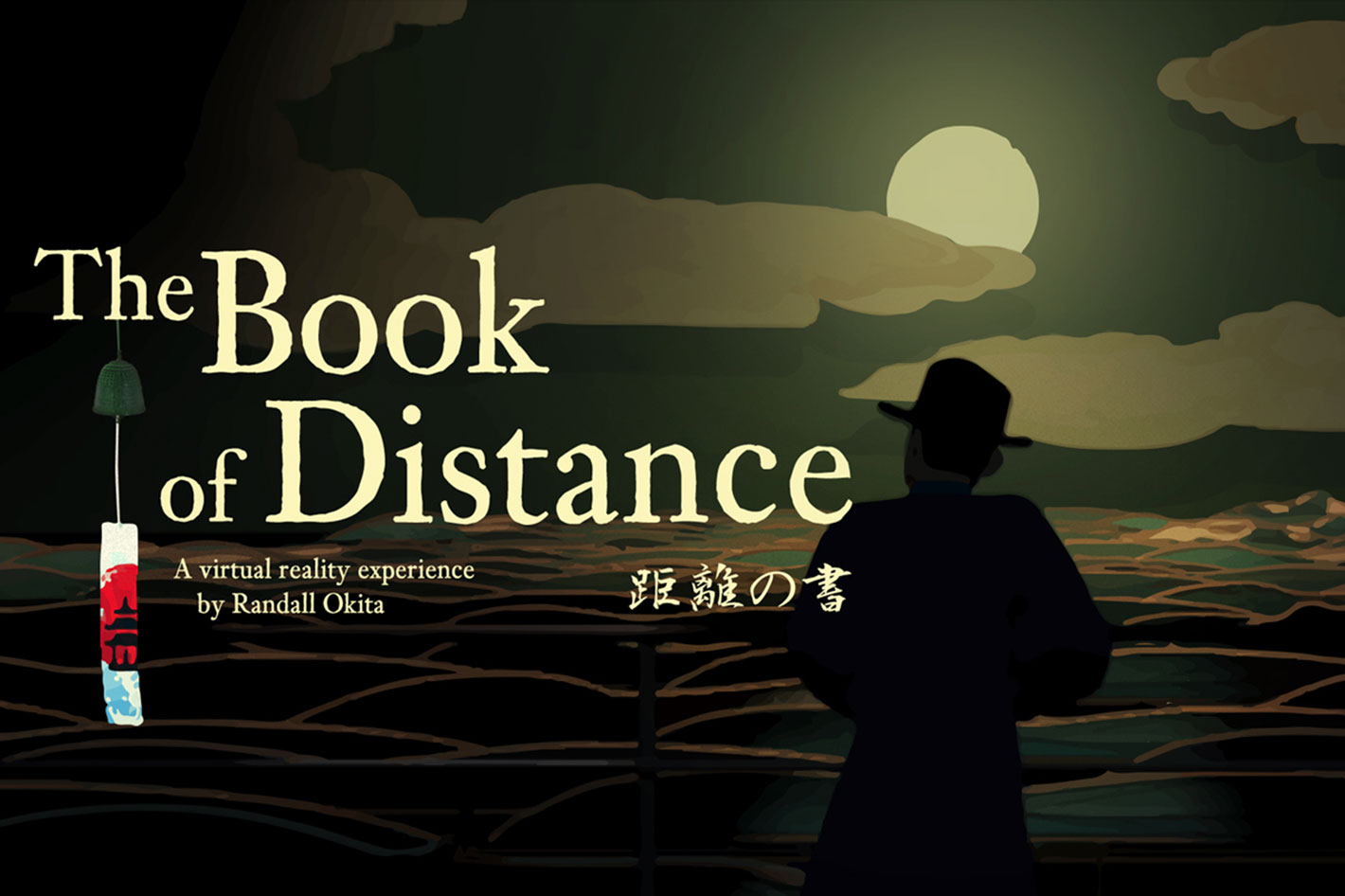 With a growing list of awards received, The Book of Distance blends techniques from mechanical sculpture, film, and stage to redefine personal storytelling in virtual reality.

In 1935, Yonezo Okita left his home in Hiroshima, Japan, and began a new life in Canada. Then war and state-sanctioned racism changed everything—he became the enemy. Three generations later, his grandson, artist Randall Okita, leads us on an interactive virtual pilgrimage through an emotional geography of immigration and family to recover what was lost.

Launched in 2020 and recently updated, The Book of Distance is an immersive Virtual Reality experience that imagines new possibilities for personal storytelling. The documentary has been presented to multiple film festivals worldwide, with some 25 selections and awards, a list that continues to grow.

Official selection at Sundance 2020, Tribeca 2020, Hot Docs Canadian International Documentary Festival – DocX or Venice International Film Festival – Venice VR Expanded in 2020, among many others, The Book of Distance was also the winner of the Virtual & Remote, Best Narrative Experience at The Webby Awards (2021), Best Immersive Experience, Canadian Screen Awards (2021) and VR Story Award, Beyond the Frame Festival (2021), to mention some of the awards received.

The Book of Distance blends techniques from mechanical sculpture, film, and stage to redefine personal storytelling in virtual reality. Family archives add a haunting layer of realism. 2D and 3D hand-crafted sets reminiscent of Japanese woodblock prints, evocative character design, and seamless choreography combine with surprising moments of interaction to gently whisk us across the ocean and through the years. 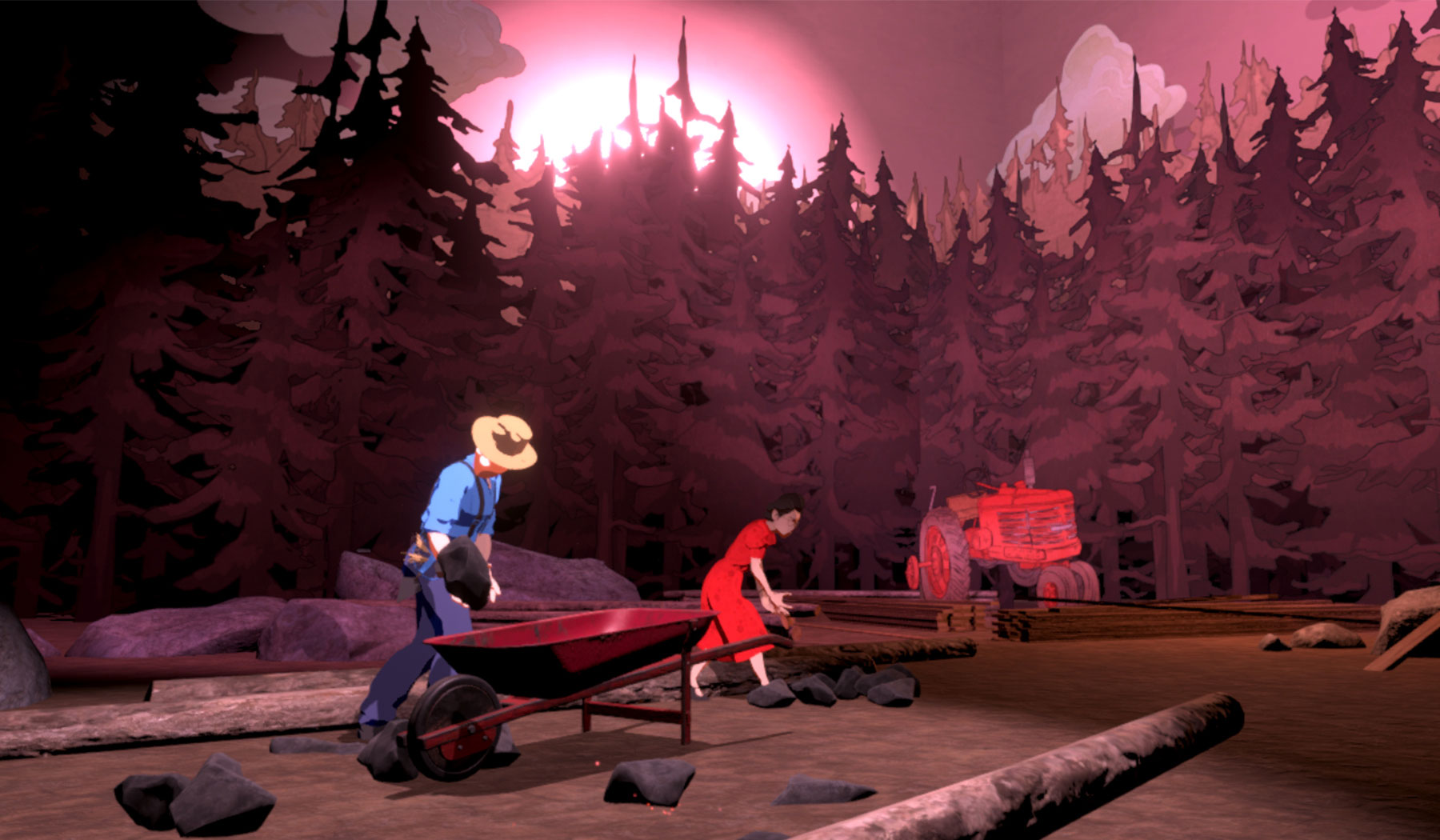 Randall Okita is a Canadian artist and filmmaker whose work employs sculpture, technology, physically challenging performances or stunt work, and rich cinematography. His work has been shown in both group and solo exhibition, awarded internationally, and screened at festivals around the world, including retrospective screenings of his short-film catalogue in San Francisco and Toronto. Born and raised in Calgary, Alberta, Okita lives and works in Toronto and Japan.

The project started to take shape in 2016, when the National Film Board of Canada invited a handful of artists to the NFB studio in Toronto. Producer David Oppenheim says that “the NFB already knew Randall from his previous animated short film, The 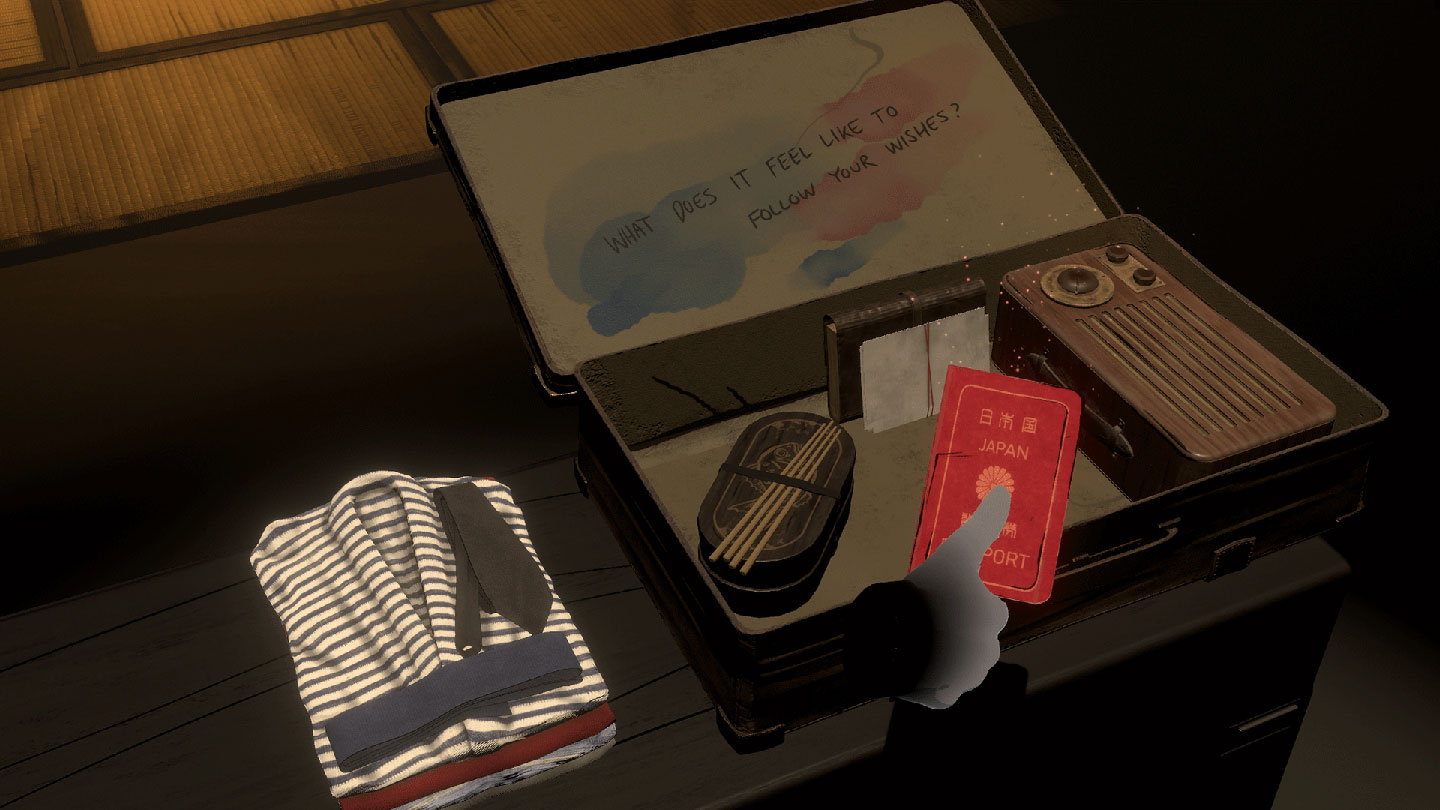 Weatherman and the Shadowboxer, as well as his other work in sculpture and installation. We thought it would be interesting for him to really interrogate VR as an artistic medium.”

Randall Okita wanted to tell the story of his grandfather. Aware that “what we know about our grandparents and family history often comes in bits and pieces” he believed that “virtual reality offers new possibilities for looking at and engaging with snippets of historical moments. When I started experimenting with VR, it became apparent that I could reimagine moments that I’ve thought about so many times in a completely different way. I could be present and participate in them. I was captivated by these possibilities, and the project evolved from there.” 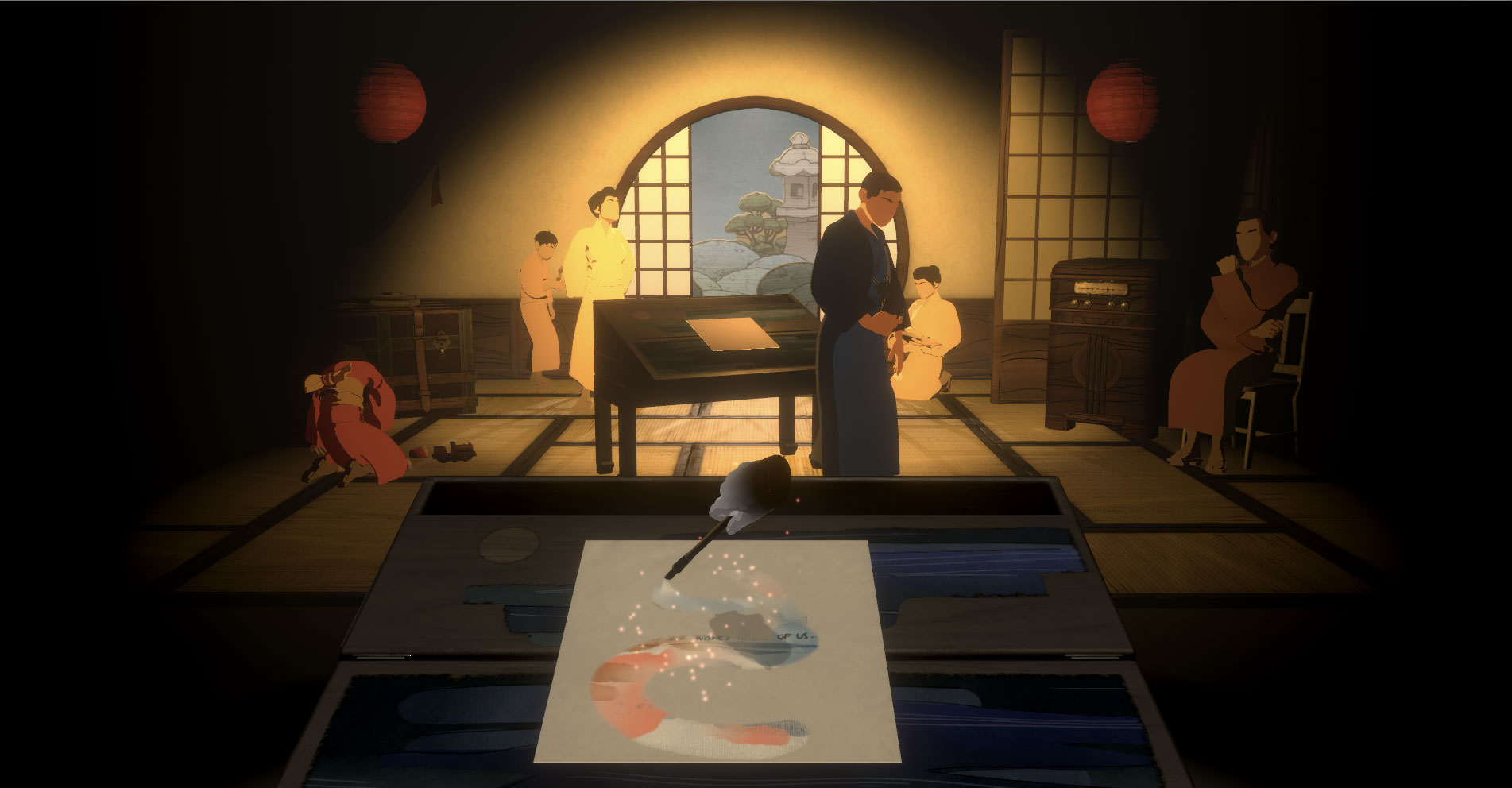 The basic concept for The Book of Distance, David Oppenheim continues, “really came alive when Randall started going down the path of exploring his grandfather’s journey. We set out to tell a story that we felt could add to the conversation around this dark period in Canadian history and the world we live in now. With Randall’s artistic background in film, sculpture, and performance, we felt he could look at VR as a mode of storytelling in an interesting way—particularly in terms of how the story could be experienced in a medium that privileges physicality and space. We knew he could bring this experience to life by borrowing from the other art forms he had worked with in the past.”

Asked to explain how The Book of Distance was designed, Randall Okita says: “I would describe it as minimalist magical theatre. I intentionally created the sets in the spirit of theatre and Japanese woodblock prints. This can be seen in just about everything—the lighting, the music, the transitions, and so on. There’s a lot of flat sets with things like 2D moving waves and clouds. These are all models that were hand-crafted by artists and then animated. Unlike the highly rendered environments of most VR experiences, I wanted viewers to realize that we were hand-building a physical space built on active imagination.”

The experience opens with an old-fashioned black paper photo album—the kind our grandparents used to have. We turn the page to suddenly find ourselves inside a landscape of lost memories, teeming with lives lived as imagined by writer and creator Randall Okita. As we journey across countries and generations, Okita acts as our guide, at times physically constructing each new scene as if directing on set for an audience of one. 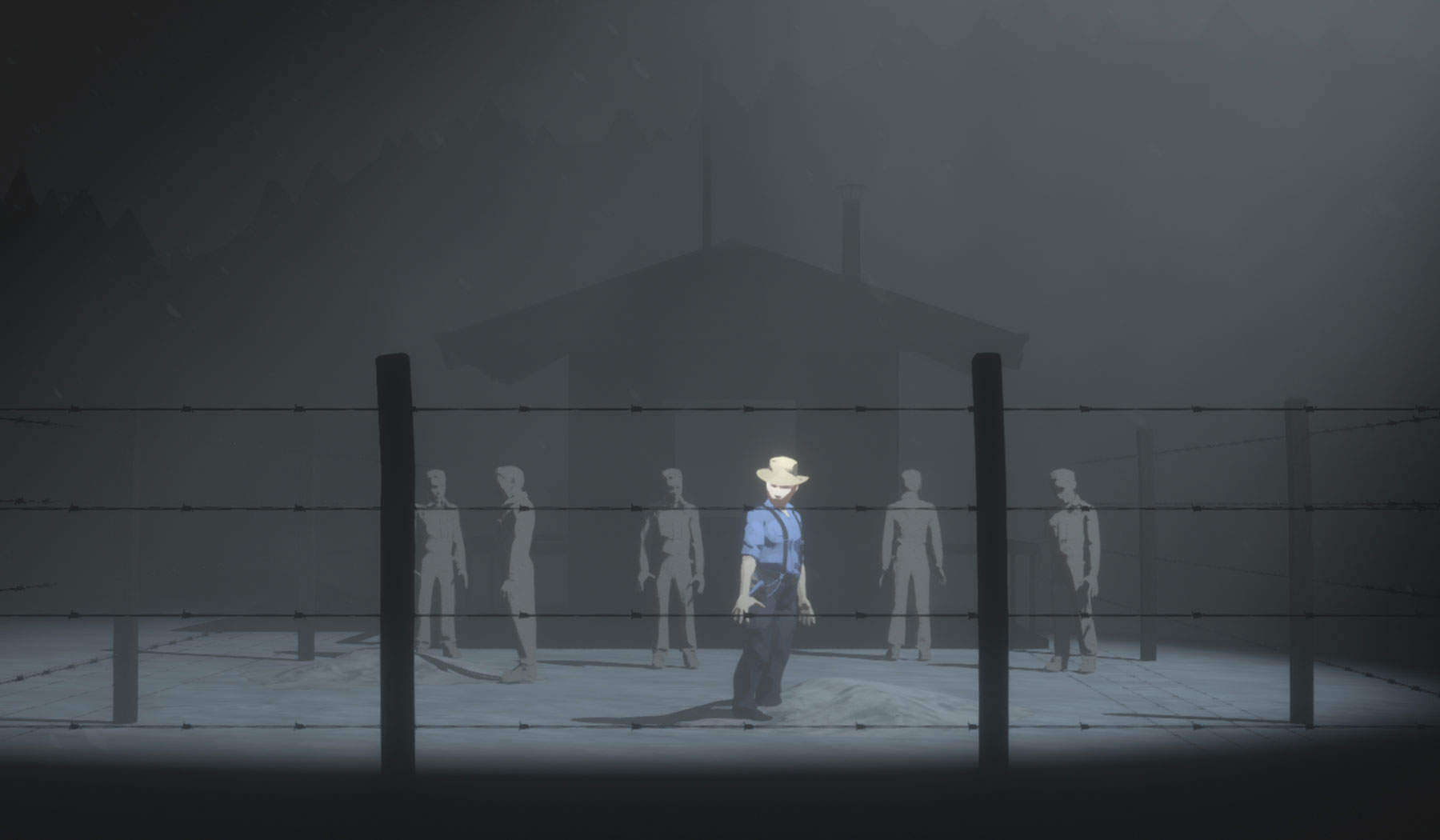 Imprisoned, because he was Japanese

A powerful linear narrative is balanced with moments of interaction that deepen our understanding of the story. Seamless choreography moves us around the space, engaging our emotions through physical action. We reveal archival family photos and documents that remind us that this journey is the real-life story of Randall’s grandfather, an immigrant to Canada in the 1930s, imprisoned soon after by his government because he was Japanese.

The story unfolds from that moment—a moment that Okita has 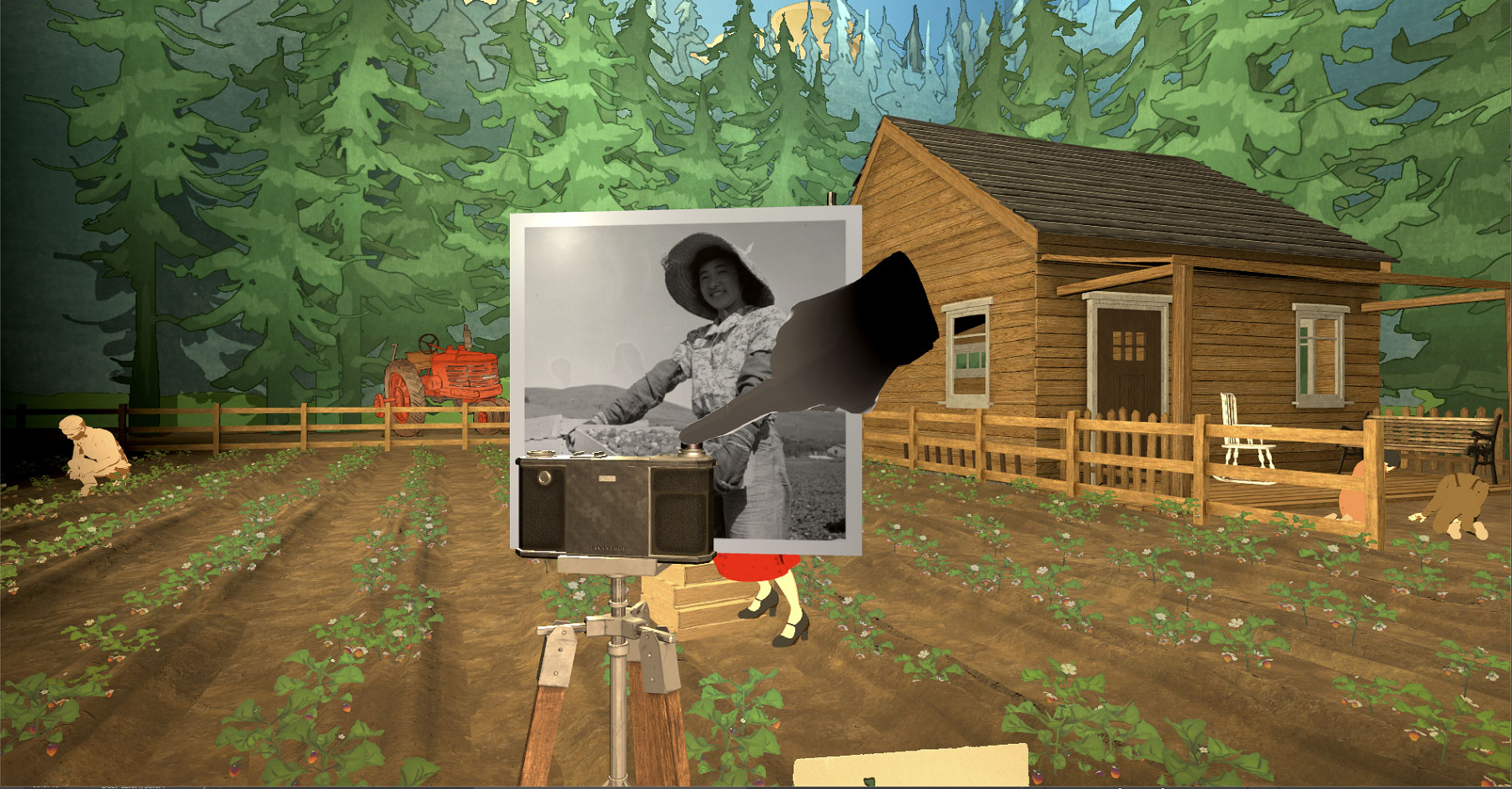 enacted for himself as an attempt to make sense of his grandfather’s journey. Using the medium of virtual reality, the artist invites us to participate in his act of imagination. The short-form piece lasts only 25 minutes, but by the end we feel as if we have been transported somewhere else.

One note here: although The Book of Distance is a room-scale experience, you can view it sitting down, although the option is not present or even explained to users. Having said this, it would be good for the developers to add that option – as the developers of the recent Pollinator Park did – and give users the option to “walk virtually” within the sets, as it would expand the range of public able to fully explore the experience. 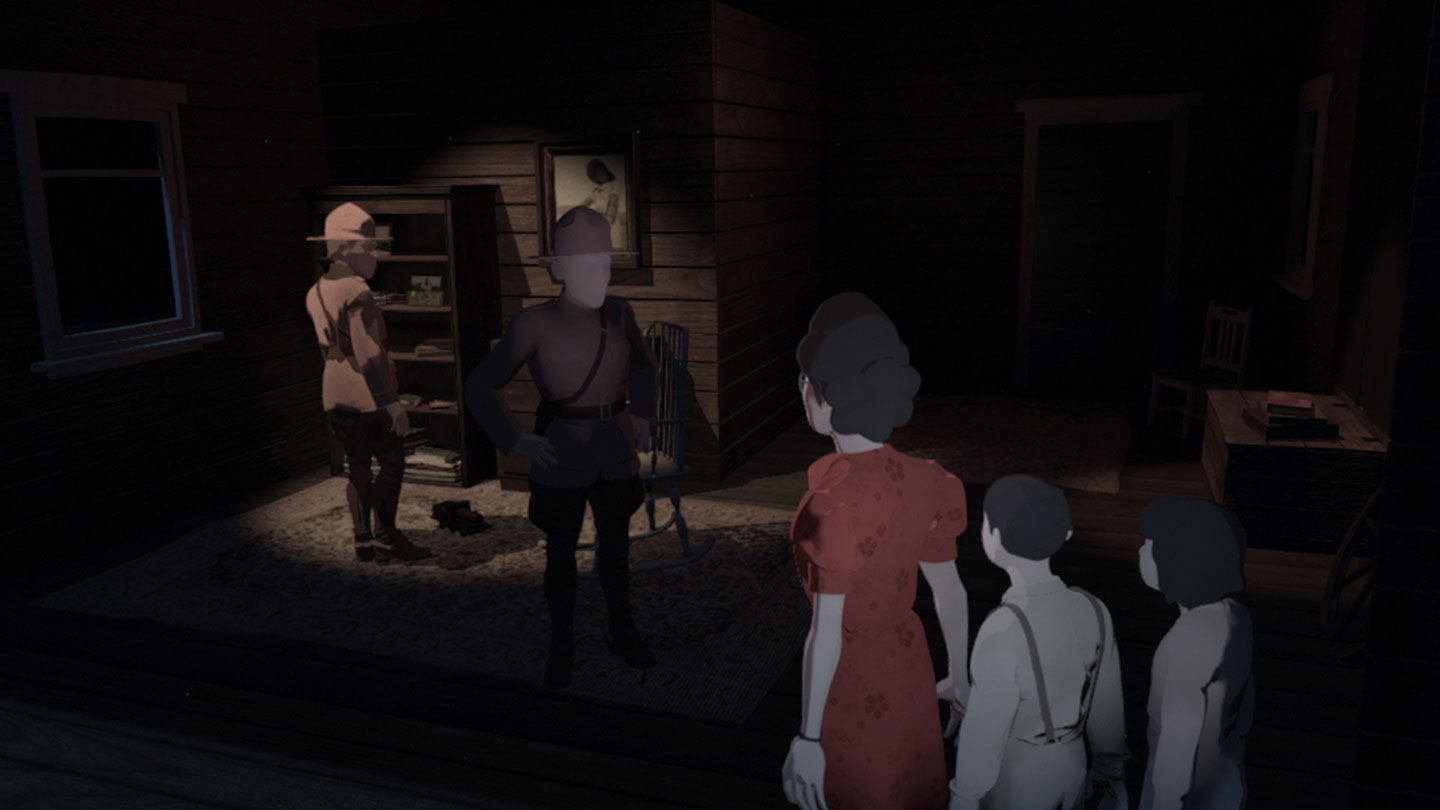 A strong linear story from the director’s POV

For those who, looking at the sets, imagine The Book of Distance was easy to produce, David Oppenheim notes that “telling a good story in an interactive medium may sound simple—give the audience some choices—but it’s really difficult to balance the power of linear storytelling by an authorial voice and the power of giving the audience some agency in that telling.”

“Working with Randall – he continues – was a great opportunity to try and hone the natural affordances and possibilities of telling stories in VR. The Book of Distance tells a strong linear story from the point of view of the director, but it does so in a way that also allows the audience to move through landscapes and physically engage with the story.”

David Oppenheim adds that “Randall managed to strike that balance remarkably well. Everything in the experience comes together in a very comfortable and enjoyable way—like it’s the most natural thing in the world to be seeing and interacting with these dramatic moments in the virtual space. Like any powerful work of art, we are given the space to project onto it. Randall asks us what it might be like if we could close the distance between our memories, and ultimately, what would it feel like if we didn’t have to live in this space in-between? That’s a really enticing proposition. Even though the story is about Randall’s own family past, we end up wondering about our own.”

An attempt to reclaim lost stories

The result is a free interactive VR experience in which Okita invites us to participate in this generous act of imagination: a space of magical theatre and generational echoes. He never strays too far from our side as we move through the story’s darker moments. His need to reclaim his grandfather’s lost moments becomes our own. Together we reimagine a significant moment in history and a very personal journey of loss and recovery.

Asked about any nice surprises that came out of this project, Randall Okita says “one of my favourite things to hear from people who have experienced The Book of Distance is the connections these memories bring up. I’m very proud of the piece and of being able to share it on behalf of my family, but I also love those kinds of echoes from people—when they talk about the old shoeboxes and albums they have. To me, that’s really what it’s about. This is one of many stories and if people can carry that afterwards, I think that’s pretty wonderful.” 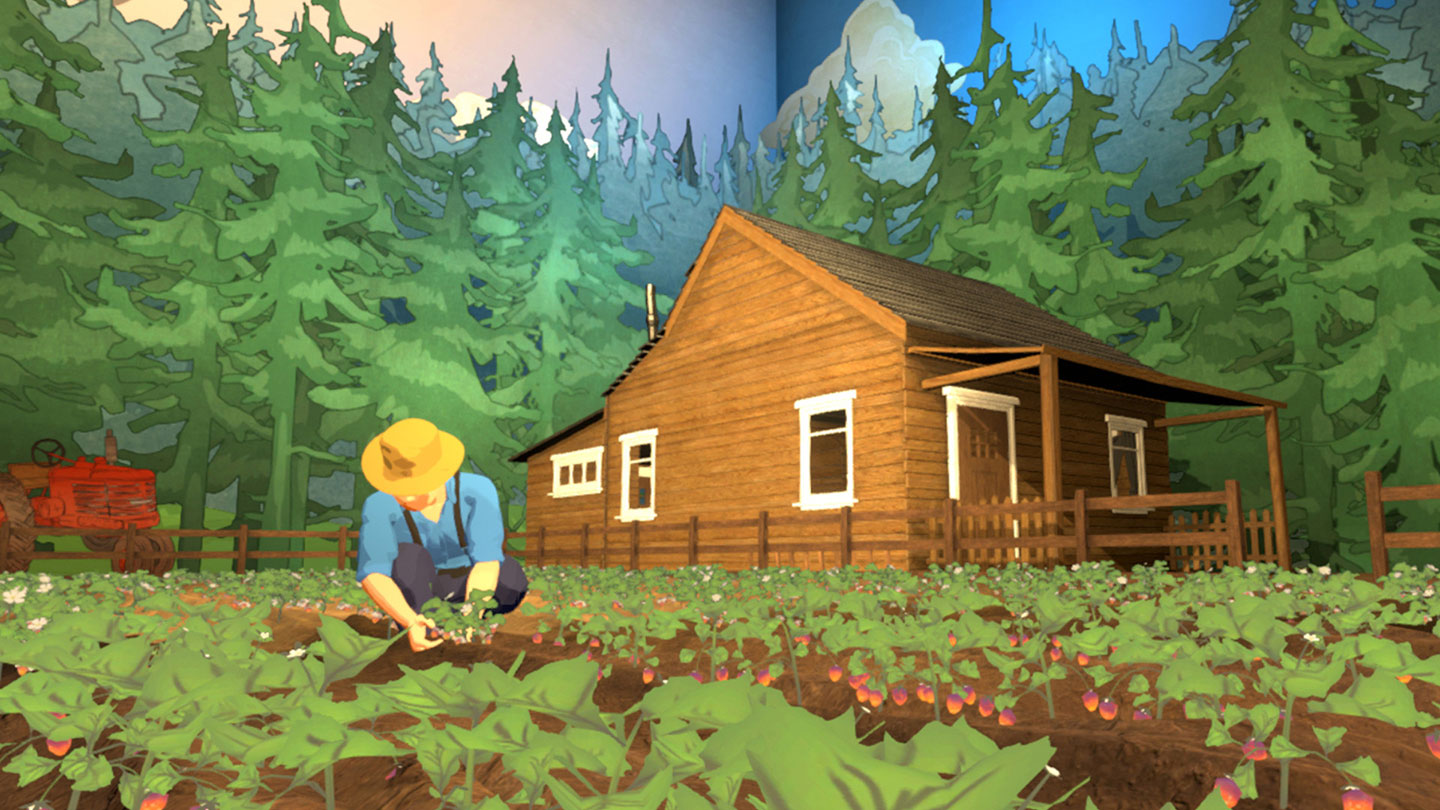 As a final note about the project and what it brings to the collective space, David Oppenheim says “there is a great loss in the silencing of a community and these reverberations have played out across generations. Giving Randall a platform to tell his story is an attempt to reclaim these lost stories and, hopefully, create more space for the right conversations to occur.”

Written and created by Randall Okita, produced by David Oppenheim with Anita Lee as executive producer and a vast team behind them, The Book of Distance is available for a variety of VR headsets at the usual platforms: Steam, Viveport and the Oculus Store. The short-form piece – 25 minutes – is available in Chinese, English, French, and Japanese. This is a key title to include in any Virtual Reality library, along with the many other titles we’ve suggested to readers here at ProVideo Coalition in recent weeks.