The most ambitious project from Google Spotlight Stories is also the one that pushes the boundaries in terms of the creation of narratives in Virtual Reality: embark on Age of Sail. 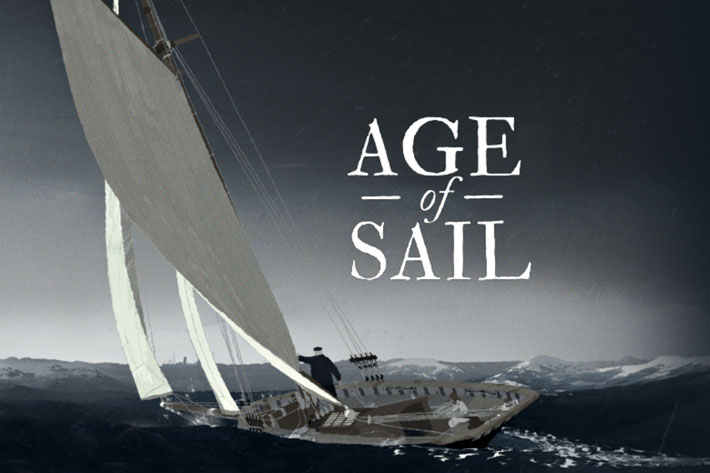 As 2019 comes closer, some suggest VR is dead or about to die. Let me say that I believe it is only adjusting its course, and products as Age of Sail point to a viable and exciting way to tell immersive stories.

Age of Sail, tells us the story of a sailor and a little girl. Set on the open ocean in 1900, Age of Sail is the story of William Avery (Ian McShane), an old sailor adrift and alone in the North Atlantic. When Avery reluctantly rescues Lara (Cathy Ang), who has mysteriously fallen overboard, he finds redemption and hope in his darkest hours.

So, having set the scenery for the story – and believe me, you’ll want to see it and not have me telling you the whole plot – Age of Sail is available in two versions: the theatrical presentation, which gives you an animation film cut the way the director decided and a Virtual Reality experience, which lets you frame the different scenes whichever way you like, within the natural limitations of a VR bubble inside which you’re free to move.

Believe me, I’ve watched the two versions, and the theatrical presentation is a great moment of animation and a touching story to share with family and friends (and I mean ”share”, telling them to watch it, as no words paint the whole picture. Having said this, nothing prepares you for the experience you’ll have once you see it in VR. Your experience may differ, because of the support used it, as Age of Sail is available, FREE, for VR in anything from smartphones to VR headsets. I tried it with the Oculus Rift and is a mesmerizing moment that really suggests the potential VR has to create animated stories. 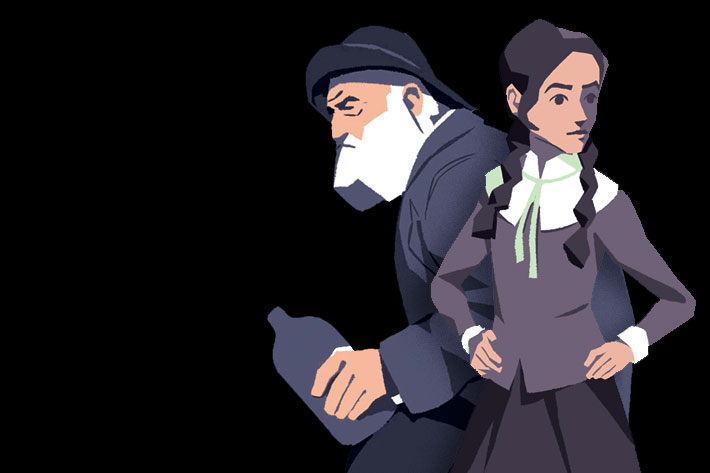 Age of Sail is the most recent and ambitious title coming from Google Spotlight Stories, a name that houses Google’s experiments in storytelling for VR. The goal of the artists and technologists is to make immersive stories for mobile 360, mobile VR and room-scale VR headsets, and build the innovative tech that makes it possible. The invitation for the viewers is simple: “Enjoy the experience – look, listen, explore – and never worry that you’ll miss anything.”

From Windy Day, directed by Jan Pinkava, that started the series, through Special Delivery, directed by Tim Ruffle, from Academy Award winning studio Aardman Animation, to mention a few, to Age of Sail, directed by Academy Award winning filmmaker John Kahrs, a dozen experiments have paved the way for the future of Google Spotlight Stories. VR may not be the killer tool that will make us forget everything else, but it does not have to: it just needs to be another tool for telling stories and immersing us in other worlds. If you approach it with that in mind, it will be easier to understand its true power. And believe me, if you still have a mind that loves challenges and accepts the magic of life, VR will be a platform for exciting experiences that contribute to… make you more human. 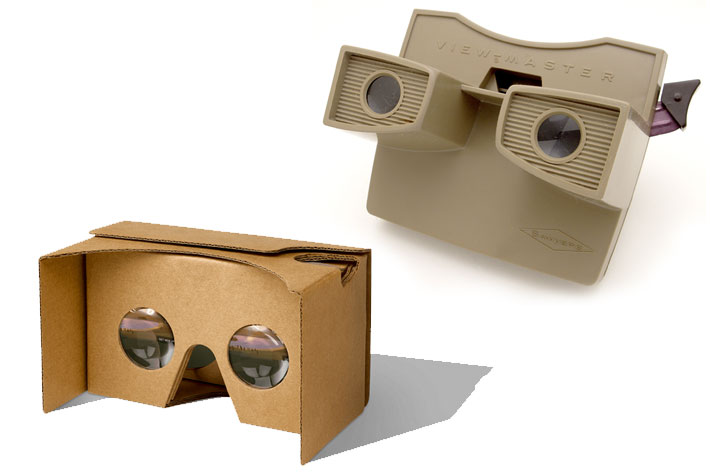 From View-Master to Virtual Reality

The work presented through Google Spotlight Stories tells us just what I mentioned in the previous paragraph, and it is only one of many examples already available, many of them free to watch, as long as you’ve access to VR equipment. And it does not need to be a complete headset, many of these experiences can be viewed with a simple smartphone VR viewer, not much more expensive than your grandparents View-Master, which was also a unique experience when it was launched. Google’s Cardboard version is even cheaper!

I want to go back to some of the titles, both from Google Spotlight Stories and other origins, that have taken us all the way to Age of Sail, but for now let me draw your attention to this title, as a New Year’s suggestion for all ProVideo Coalition readers. If you’ve not yet tried VR, grab a smartphone VR set and give it a try. I can not vouch for the experience using a smartphone, but the reviews are mostly positive, although I believe you’ll need a powerful smartphone to watch the film.

If you can get hold of an Oculus Rift or a Vive, then you’re set for a unique experience that will convince you that VR is here to stay. With the price asked for these headsets now, you should probably consider buying one, as I did this Christmas. In fact, we acquired two, to be able to experiment with different titles, as I want to look at how VR is used for telling stories in 2019, and write about those experiences here at ProVideo Coalition. 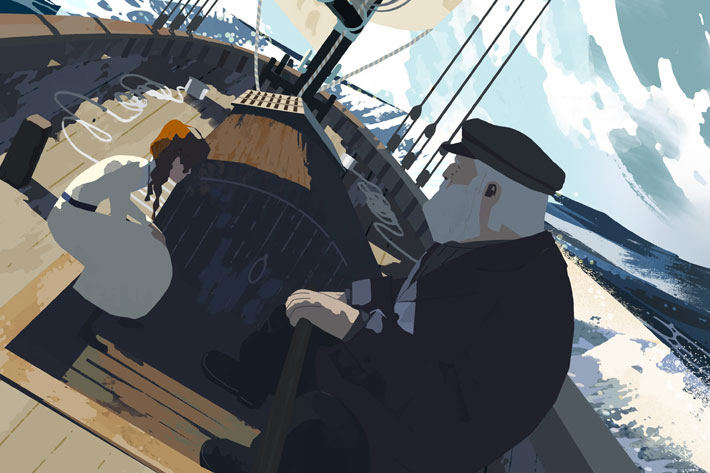 Age of Sail: the Director’s and the Viewer’s Cut

I’ve watched a lot of animation titles recently (more on this coming in another article), but nothing prepared me for Age of Sail, which is, to a certain extent, what interactive TV could have been if ever there was a chance to build it. As I mentioned, the theatrical presentation is fantastic, because, in the end, the story, which is the key element, creates the solid foundation for the narrative and the camera angles chosen by John Kahrs. It’s, one could say it, the Director’s Cut.

The VR version, at least on the Oculus Rift is… the Viewer’s Cut, because you can view the story from so many different angles, as the touch controls allow you to roam about the “stage”, making  almost infinite the ways you can follow the narrative. You’re not just a spectator, you’re a spectator that moves after the best perspective to watch each moment of the story: you move afar from the center of the stage, you get close to the characters, so close you can almost feel their breath… You get the idea.

It’s mind boggling, because you’re there, and that makes each dramatic turn of the narrative feel like a punch in your stomach. Oh yes, you’ll feel it like nothing else before. That’s the power of Virtual Reality, and we are talking about an animation film. One that will, I have no doubt, set you on course for a new relation with Virtual Reality. It’s not a gimmick, it is just a tool, another new challenging tool to help create better narratives. For animation filmmakers – and beyond – is a new ground to be explored.

That’s something that the filmmaker John Kahrs and the team behind Age of Sail made. Like the sailors that made the Age of Discoveries, they’ve set VR narratives on a new course, and nothing will be the same from now on, right when we’re starting a new year. In no way seeing the theatrical presentation prepares you for the VR experience, I must say. It’s not about being better, it is just different. Unique!

Age of Sail has already “conquered some oceans”: the short animation film is 2018 Official Selection Venice Film Festival and shortlisted for the 91st Oscars Best Animated Short. The film was launched last November, and recently Google Spotlight Stories shared a Behind the Scenes Age of Sail video, which helps to understand the hurdles faced by the team while building the VR version. 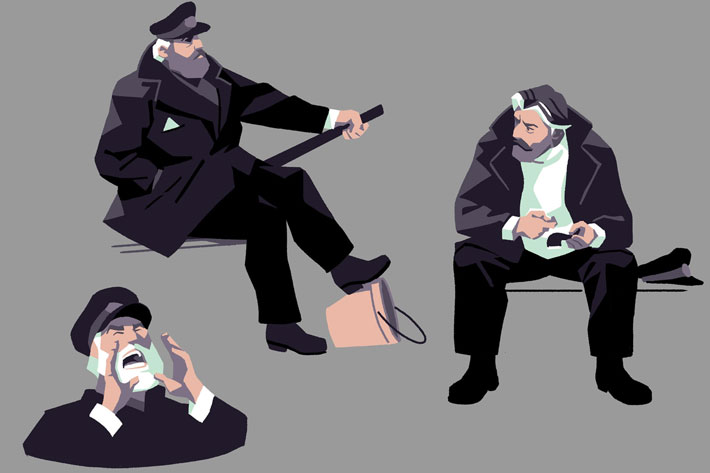 Going Behind the Scenes

The voices of Ian McShane as William Avery and Cathy Ang as Lara guide the public through the whole narrative. Filmmaker John Kahrs says that since “the very beginning the idea of Avery was built around Ian McShane’s voice, he really is the perfect voice for this character” but there is a non-speaking character that has an important role in Age of Sail: the ocean.

Creating an immersive ocean as the center stage for the story was not an easy task. Theresa Latzko, Technical Art Lead for the Age of Sail project, says that “it’s such a vast undertaking doing water in any kind of CG environment and then doing it in a VR real-time and environment is just more complex” especially when you’ve to deal with two aspects: make it feel realistic enough so that viewers feel immersed in that world and “sense like this water is a perilous place that there’s something at risk and you could drown in it”, as John Kahrs says, while making everything possible so as not to get the viewer seasick. 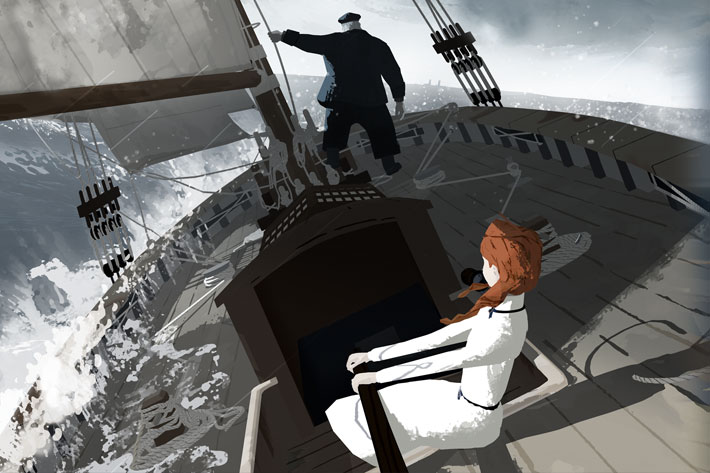 In the Behind the Scenes of Age of Sail the filmmaker reveals that “the idea of doing VR on a boat in a rolling ocean on paper, that sounds pretty crazy because it feels like maybe it’s something that’s almost designed to get you seasick” but the team spent a lot of time up front “really figuring out how to make the combination of elements work so that wasn’t happening”.

It took them some six weeks of experimenting and, continues John Kahrs, “we definitely found a really nice combination. Even the people that are most seasick prone we found that even they weren’t getting sick”. It was an important goal to meet, to go ahead with the story, as, he adds, ” what you want is your audience not to be worrying about getting seasick or anything like that you just want them to be immersed”.

Immersed, that’s the best word to classify what Age of Sail is. A total immersion in a story… but you really have to see it in VR to fully understand the meaning, believe me.