As the world celebrates the 50th anniversary of the Apollo 11 voyage to the Moon, a number of people claim it’s all an hoax, and the movie industry is often associated with the creation of the fake footage used by NASA. 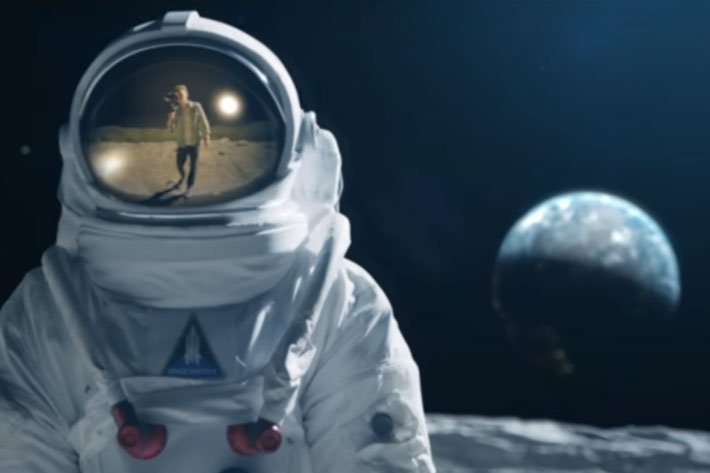 With the tools available today, almost anyone can shoot convincing footage of astronauts landing anywhere on the Universe: NVIDIA, Shutterstock and DJI show their versions of the Apollo 11 landing.

We’re now celebrating 50 years since Neil Armstrong, Edwin “Buzz” Aldrin and Michael Collins made it to the Moon, and many people continue to believe the Moon landing never was. I believe they are the same who say that the Earth is flat, that the climate change is a Chinese hoax and other nonsense that we listen to, every single day now. According to a poll from the 70s, the number of people who deny the Moon landing is more than 30 percent. There are no recent polls to confirm or deny if the numbers have changed.  Maybe these things have an explanation, but the tone here is different.

The fake moon landing idea has always been presented with a connection to the cinema, and many of the moon landing conspiracy theories suggest that the whole thing was created by Stanley Kubrick, and shot while Kubrick was making 2001: A Space Odyssey.  Some go as far as saying that Kubrick wanted to share his secret, but died before he was able to do so. 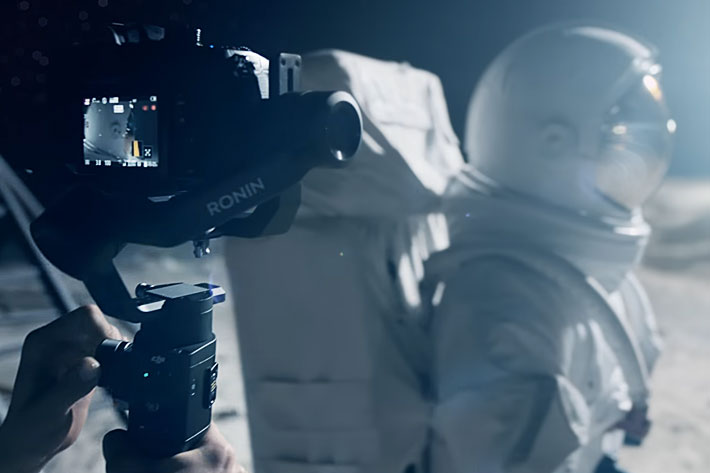 From Kubrick to DJI

Let me say this: Kubrick’s 2001: A Space Odyssey is very convincing footage (I’ve seen the movie more than 30 times) and an exercise in Hollywood wizardry, especially when we think that it was shot at a time when computers were not around to create the effects we see in modern day science-fiction movies. It’s not hard to believe Kubrick could just shoot the Moon landing for NASA, in a secret studio created inside an air force base.

That’s a discussion we will leave for others, though. The truth is that everybody is trying to celebrate this 50th anniversary in some way, and the best way continues to be with the use of images. That explains why in the recent  days we’ve been bombarded with different examples of how easy it is to fake a moon landing. DJI could not resist using the idea in their recent video used to launch the new Ronin-SC, a single-handed 3-axis gimbal designed for popular mirrorless cameras.

DJI’s video shows the accessory being used in different shooting situations, including one that reminds us of the studio set where, moon denial believers say, the Moon landing was shot. It’s just a way to demonstrate how easy it is, especially with the tools available today, to recreate a landing on the Moon or, in fact, any other planet anywhere in the Universe. 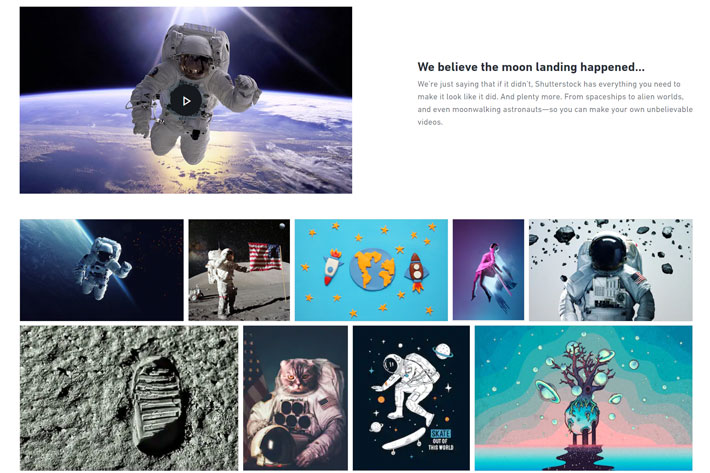 The stock agency Shutterstock took another approach. With lots of brands using the opportunity to market themselves via the moon landing, the agency decided it wanted “to showcase the best of what we can do visually”.  In honor of the 50th anniversary of the moon landing, the company put together a short fun video using only its stock footage. The video is an extension of Shutterstock’s “It’s not Stock, It’s Shutterstock” campaign, launched in January and designed to showcase the quality and depth of Shutterstock’s creative asset repository driven by more than 750,000 contributors from around the globe.

Other videos in this campaign include the award-winning Fyrestock video, Squabble of Seats, Stranger Things as well as the April Fool’s Day library joke video, which ProVideo Coalition showed. The Moon Landing “Exposed” from Shutterstock comes with a note from the company: “We know it happened. But if it didn’t, you could absolutely make it look like it did with Shutterstock.” The video plays off the conspiracy theory that the Apollo 11 mission was faked, and uses the idea to show how stills and moving images allow anyone today, even without shooting a single frame, to create a “moon landing”. 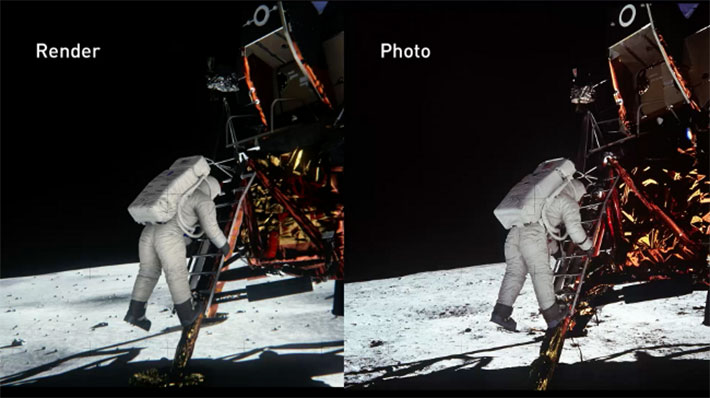 I left NVIDIA for last on purpose, because NVIDIA is back with its own take on the Moon landing. I say it is back because, in 2014, NVIDIA published a video, “Debunking Lunar Landing Conspiracies with Maxwell and VXGI” where the company shows how using Maxwell, its new GPU architecture  at the time, it was able to digitally rebuild one of the landing’s iconic photographs – Neil Armstrong’s shot of Buzz Aldrin clambering down the lunar module’s ladder – and confirm that the photograph was not fake and the light conditions were real.

Powered by NVIDIA Maxwell GPU architecture and Epic’s Unreal Engine 4 and using NVIDIA’s Voxel Global Illumination (or VXGI) the team at NVIDIA explored the Apollo 11 landing site and put the landmark photo of Buzz Aldrin descending to the moon’s surface to the test. If you want to see the demo, and have a Windows PC able to run it, you can download the app from NVIDIA’s website.

NVIDIA said this, back in 2014: No, the Apollo 11 moon landing wasn’t a hoax. And we can prove it. In 2019 they are back with another piece of work to celebrate the anniversary of the landing. The project started five years ago, when the team that created the original demo collected every detail they could to understand the NASA Apollo 11 landing image, takes now another step, as NVIDIA enhances the earlier moon-landing demo using RTX real-time ray tracing technology. 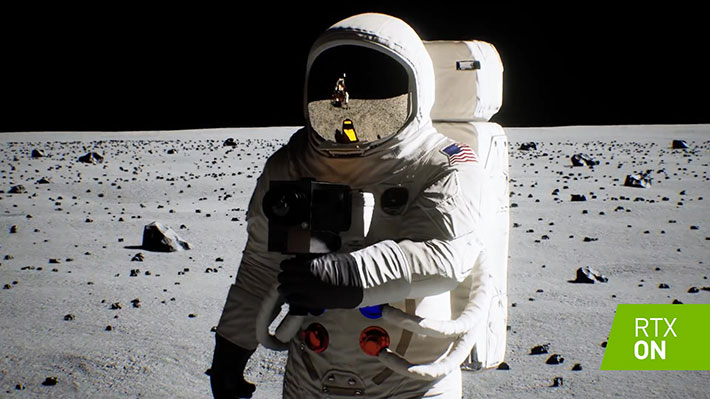 The result is a beautiful, near-cinematic depiction of one of history’s great moments. That’s thanks to NVIDIA RTX GPUs, which allowed NVIDIA’s demo team to create an interactive visualization that incorporates light in the way it actually works, giving the scene uncanny realism. With RTX, each pixel on the screen is generated by tracing, in real time, the path of a beam of light backwards into the camera (your viewing point), picking up details from the objects it interacts.

What took hours to render five years ago works now at a much faster speed. That allows artists to instantaneously see accurate reflections, soft shadows, global illumination and other visual phenomena. Prior to RTX technology, says NVIDIA, “only special effects rendering farms working for hours or even days on a single scene in a movie could manage this level of realism.”

The second video from NVIDIA shows how the earlier demo looks with RTX real-time ray tracing technology. It’s, the company says, “a beautiful, near-cinematic depiction of one of history’s great moments”. The cherry on top of the cake is the opportunity to relive the moment with an interview with Buzz Aldrin, whose giant leap years ago inspires new generations of moonshots today.

Of the three astronauts only Buzz Aldrin and Michael Collins, who remained in orbit, manning the command module while waiting for the return of the lunar module, are here today, on Earth, to celebrate the anniversary. Neil Armstrong, forever the first man on the Moon, is not around to celebrate the date.