For a long time Canon has said the general public does not want 4K. Something must have changed now, as the new M50 offers 4K for those moving from a smartphone or compact camera upwards. 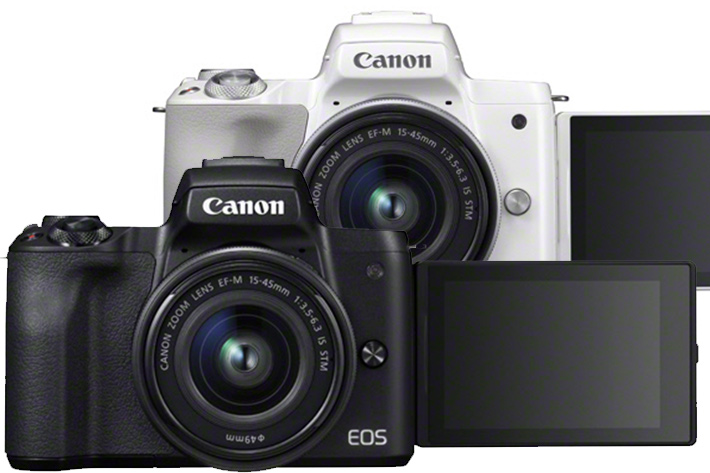 Long before the official announcement, the specifications – most of them – were already known, discussed, and the subject of a thousand interpretations. There seems to be a common note, though: the M50, although positioned below the M5 on the family line, appears to be a camera where Canon – finally – invested to create a serious 4K video machine. It may not be for the professionals – for whom Canon has other models and lines they will continue to protect – but as a vlogging machine, it is, no doubt, an interesting option, even more so at the price announced: $779.

Before we move into the specifications of the camera, it’s important to note that Canon has said, for a long time, that the company would only introduce a 4K camera for the general public when they felt the time was right. In fact, despite the introduction of the XC10 in 2015 and the XC15 in 2016, which, anyway, were not for everybody, 4K has been absent from Canon’s plans, except for some high-end EOS DSLRs… and their Cinema EOS models.

While almost every other company has introduced 4K in models from compacts to mirrorless, Canon seemed to be ignorant of the trend. The EOS M50 suggests, many seem to agree now, they were not, they simply took time to design a camera that, although it looks like a model to test the market, points to a market Canon has been courting for quite some time: vloggers. In fact, the M50 has the features – together with a Vari-angle LCD – to attract vloggers and anyone who wants a Canon 4K video camera to take everywhere. That might be the public for this model, if we consider Canon loves to design cameras for specific targets.

Together with the EOS M50 Canon introduces two new DSLR cameras, EOS 2000D and EOS 4000D that confirm the company continues to follow the same path: there is nothing new about those models, they just keep the entry-level segment of the market rolling. And while some new DSLRs are expected, like a new 7D and a 90D, there is no indication, yet, that they will offer 4K video. Although they might…

The EOS M50 now announced means a good start for Canon in terms of mirrorless cameras offering 4K, but the model is more than that. It is, in fact, a “test-bed” for some new features that, no doubt, will make it to more Canon cameras in the future. It is common practice for the company to first test some technologies in  a model before moving them across the different lines. One example is the Dual Pixel CMOS AF, introduced with the EOS 70D DSLRs, first received as “nothing special” and now present in almost all new cameras, from the top of the line Cinema EOS models to DSLRs and other cameras within the Canon family. 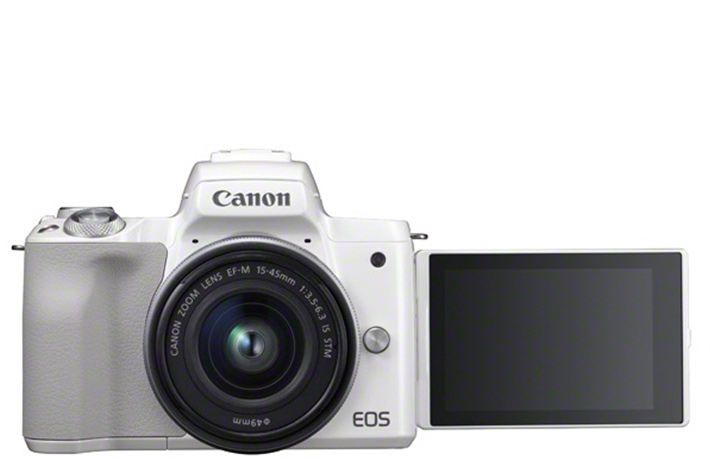 Dual Pixel CMOS AF has been evolving for some time now, and the EOS M50 is the first sign of the most recent development. This version offers complete vertical coverage (100%) and 88% on the wide side, in live view – with some lenses -, a gain of some 38% in terms of AF coverage, something that will be most welcome and make the system even more flexible to work with. Since DPAF introduction in the EOS 70D, Canon has developed the system further, and this may be the sign of things to come for future cameras, from the Cinema EOS models to DSLRs, mirrorless or compacts. For many users, and that includes professional cinematographers, it represents a key feature in terms of AF.

If you add to Dual Pixel CMOS AF the fact that you control everything from the Vari-Angle touchscreen, including, for the M50, the Touch and Drag AF function, allowing for instinctive and seamless autofocus point adjustment without taking your eye away from the viewfinder, the first 4K mirrorless from Canon starts to make some sense. The large centrally mounted electronic viewfinder – DSLR-style – allows those used to a traditional shooting experience to control things the way they prefer, while the large 7.5 cm Vari-Angle allows users to explore a variety of shooting angles, take selfies and easily record vlogs, a segment of the market this camera seems adequate for.

Canon is also introducing CR3, its new 14-bit RAW file format, confirming the M50 placement as a test camera for new things. No one knows exactly, yet, why the change in name, but this is nothing new. Canon’s initial RAW was named CRW, and was used until 2004, when new cameras started using the CR2, apparently because it was better. It may well be the case here. The new format, in fact, also comes with another surprise, a new C-RAW option that creates full resolution RAW files whilst saving approximately 30 to 40% on the file size of standard RAW files. Besides whatever gains in quality CR3 may bring, the C-RAW option also means that the number of images that can be stored inside a memory will increase, all this while still retaining the flexibility of RAW images.

4K and the power of the new DIGIC 8

Being the stage where a lot of new technologies, more evolutionary than revolutionary, one could say, are introduced, the Canon EOS M50 is announced as the “perfect choice” for smartphone and compact camera photographers aspiring to explore new frontiers, with a camera that gives them more creative freedom associated with a new 24.1 Megapixel APS-C CMOS sensor that seems to be directly related to the introduction of 4K. It’s an interesting proposition, especially when Canon has, time after time, negated that 4K was needed, and never used it in the enthusiast and advanced DSLR models, like the EOS 80D, where it was expected. Since 2015, in fact, that the market has been waiting for Canon to follow the same path as other companies. Why now, and with a camera that is not even the top of its family?

The answer may be in Canon’s tendency to first try new tech in entry or middle-level models. There is also another probable reason: the time it took to develop the DIGIC 8 image processor, which makes its debut with the EOS M50. The new processor is said to have a power similar to the DIGIC6+ used on the EOS 5D Mark IV, which was needed to make it possible to shoot video with that camera. The EOS 5D Mark IV can record 4K 25p/30p as well as recording in the high frame rate of HD 100p/119.9fps. Numbers very similar to the EOS M 50, which offers 4K at 24p/25p and up to 120 frames per second HD movie capture. The new processor is also responsible for the 4K time-lapse and 4K frame grabs from 4K movies.  It is not hard to imagine that Canon has a DIGIC8+ image processor to use on future professional cameras…

A camera for the social media crowd

The actual DIGIC 8 does more things, though: it also allows for a fast continuous shooting speed and a standard maximum ISO of 25,600. The image processor also supports a wide range of improvements in autofocus, Auto Lighting Optimiser, Digital Lens Optimiser and Highlight Tone Priority, for superb high-quality images ready to share straight from the camera, something that seems to be essential for a new generation of users, who always want to send their most recent images to social networks.

Aware of the needs of this new generation, Canon designed the EOS M50 so it integrates effortlessly with smart devices, using the free Canon Camera Connect app for iOS and Android. A constant low energy Bluetooth connection allows a smart device to ‘wake up’ the camera, perform remote triggering, and facilitates a simple switch to Wi-Fi for remote Live View shooting and transferring images.

According to Canon, “photos and videos can be transferred from the camera to smart devices automatically for easy sharing on social media sites, making the step from capturing to sharing with the world seamless. In addition, content can be cloud stored to Canon Irista or synced automatically and wirelessly to PCs and Macs with Canon’s Image Transfer Utility 2 installed.” 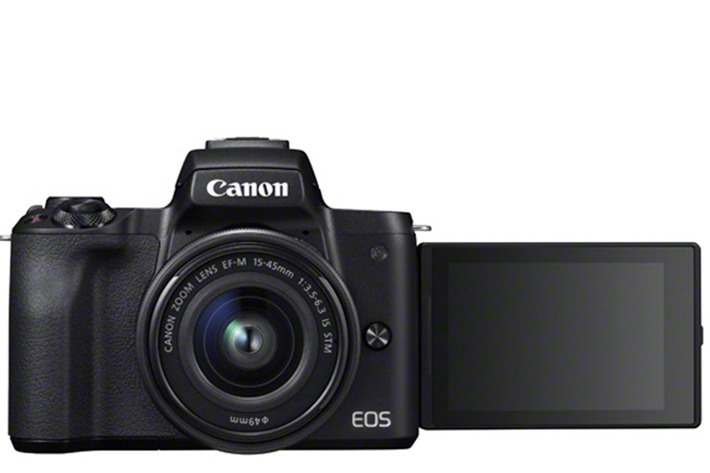 A whole family of lenses

In terms of lenses, the EOS M50 uses the EF-M family of lenses, which now has a total of seven lenses, covering everything from 11mm to 200mm (or 17.6 to 320mm, if you consider the 1.6x crop and the relation to 35mm), through five-zooms and two prime lenses. But if you don’t mind using the Mount Adapter EF-EOS M, the choice of lens is substantially larger, as the EOS M50 is compatible with over 80 EF and EF-S interchangeable lenses.

The wide choice of lenses means that, independently of your interests, you are served. And if you already own Canon gear, then the adapter is all you need to fully explore the new camera. For photographers, the EOS M50 also offers a hot shoe that allows simple connection of Canon’s Speedlite flashes. Those interested in video will appreciate the presence of a 3.5mm mic input for connecting a dedicated microphone such as Canon’s Directional Stereo Microphone DM-E1. There is no connection for headphones, but that’s probably something that the crowd Canon seems to aim the camera to – vloggers – will not miss.

The ability to capture action with a fast 10fps continuous shooting, the first time this has been achieved in a Canon mirrorless camera (the M5 stops at 9fps…) with 7.1 fps with continuous AF, integrate the list of specifications for the EOS M50. 5 Axis Electronic Image Stabilizer is present, for video, along with Dual Sensing IS, a technology introduced with the Canon PowerShot G7 X Mark II in February 2016. The system takes into account the data on the amount of camera shake obtained from the image data collected by the CMOS sensor and works to counteract not only camera shake but also the slow but significant shaking from body movement for easy handheld shooting in lowlight.

With the much requested 4K (with a 1.6x crop, meaning you use the central area of the sensor), an improved Dual Pixel CMOS AF (albeit not working in 4K… for that you will have to wait for the M5 MK II or maybe the EOS 90D), Vari-Angle LCD, EVF and Canon colour, besides some other features, like a “silent mode” for photography, and HDMI HDR output compatibility, the Canon EOS M50 may be the first real step from the company to conquer a slice of the mirrorless 4K market. It may not be the camera for everybody, but it seems to represent a starting point from where Canon can implement the new technologies, now only in new mirrorless models – probably an M5 MK II? – but to other future cameras. Price wise it seems to want to repeat the same story we saw with the EOS 300D. Not bad for a “first step” in 4K, but as said earlier, this is not a camera for everyone. And the lack of Dual Pixel CMOS AF at 4K, where you are back to contrast AF, together with the 4K crop, makes it less appealing to a lot of people.