Introduced with the EOS 70D DSLR camera, from Canon, in 2013, Dual Pixel AF was more recently added as an option to the EOS Cinema Line models C100 and C300. Is the AF system so good that even professionals want it? 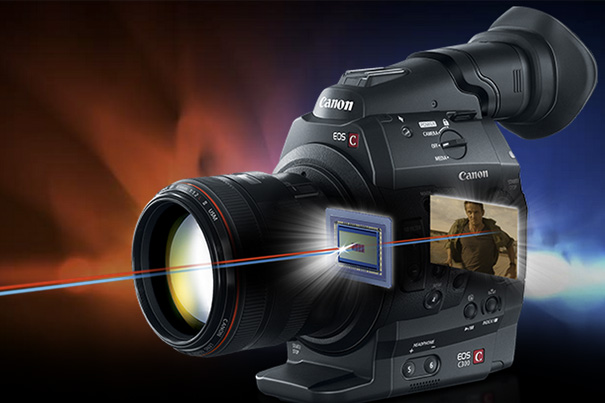 Real cinematographers focus by hand… or hire a focus puller who knows exactly how to focus lenses. But what happens when you’re a one-man band doing run and gun productions? AF may be your best friend, say some professionals.

Dual Pixel AutoFocus was first introduced in 2013, in a DSLR, the EOS 70D, a model listed in the professional area of Canon, but priced within the reach of most people wanting the specifications this model offers. One interesting aspect of the camera and the reason why many have chosen it, is the autofocus system used, based on a technology Canon presents as a game changer. 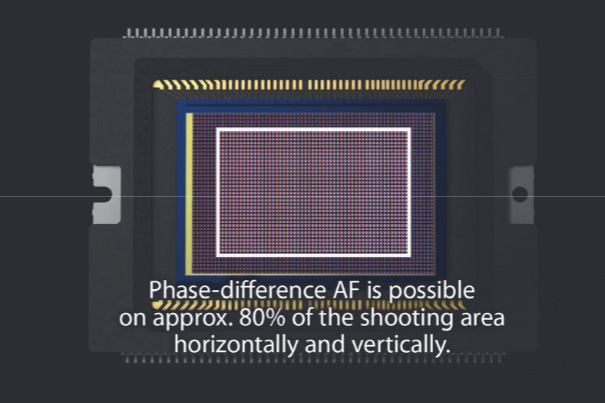 We all know how hard the marketing department from companies tries to find powerful adjectives to sell their products, but this time Canon may have used the right words, as one discovers browsing online for comments about the benefits of Dual Pixel CMOS AF, simply Dual Pixel AF or, DPAF, as some call it. In fact, the system is so interesting – according to multiple users – that Canon decided, in 2014, to implement Dual Pixel AF in the original EOS C100 from their EOS Cinema line, and also on the C300. As far as I know, these models, for their price and specifications, are not used by families to videotape their kids, so there may be another reason for implementing AF on them.

Philip Bloom is one name we can refer to when talking about Dual Pixel AF. In a video interview from March 2014, Philip Bloom explains how the system works, its limitations – in the C100 – and why the investment to upgrade the original C100 to have DPAF may be a good thing for some type of productions and small crews. Take the time to watch it. It should be noted that Canon also introduced the Dual Pixel AF in the newer models of their EOS Cinema line, like the C100 Mark II, but has not used it in other DSLRs – either APS-C or Full Frame – besides the EOS 7D Mark II. Other models use the Hybrid CMOS AF, which does not work the same way.

On its review of the EOS 7D Mark II, December 2014, DPReview points out that “Video shooting is where the magic of Dual-Pixel autofocus really comes alive. The system is very good at tracking subjects as well as adjusting focus without hunting. We were often able to trust it in situations where we wouldn’t have trusted autofocus on most video cameras” and continues noting that while the EOS 7D Mark II does a good job, the EOS 70D does it better because it offers a touch screen that allows for fast and reliable changes in focus. This means that the EOS 70D is the cheapest DSLR (DSLRs are a category different from mirrorless and other models) available in the market offering DPAF. 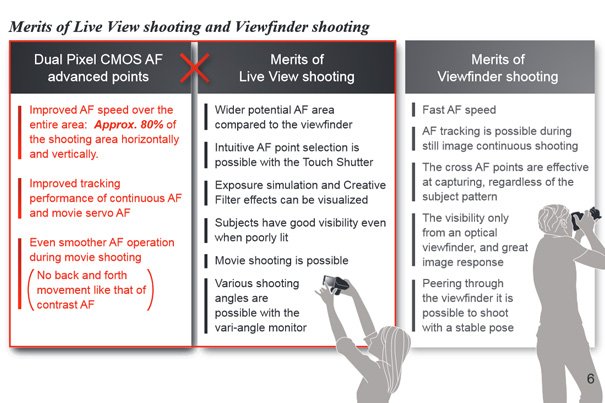 Before we continue, it is important to look at what Dual Pixel AF technology is and offers. On DSLR cameras, autofocus is usually achieved by phase-difference detection, but when the mirror is up, during Live View, the system cannot be used, so DSLRs have to rely on contrast detection, which looks for the sharpest position while moving the lens back and forth, so AF speed ends up being slow. Canon engineers came up with a solution, the Hybrid CMOS AF. Introduced in the EOS Rebel T4i, it is based on AF pixels partially spread out around the sensor, and by integrating image plane phase-difference detection and contrast detection, faster AF was accomplished. According to the engineers behind the system, there was a problem: “In order to accomplish even faster speeds, put simply, increasing the number of AF pixels and improving the precision of phase-difference detection AF should mean contrast AF does not need to be used — however, in combination with imaging, there is a limit to how many AF pixels can be distributed.” 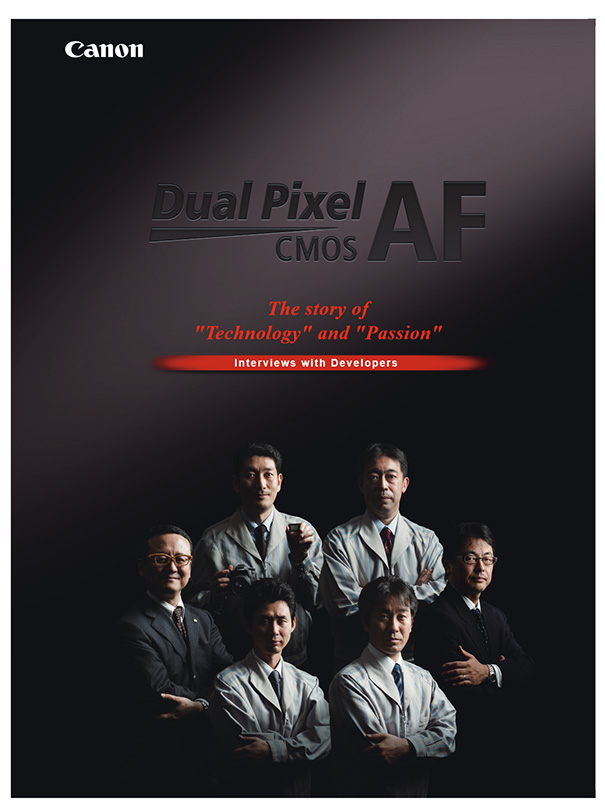 That’s where Dual Pixel AF comes in. According to Hiroshy Miyanari, development leader for the project, “Ordinary sensors have microlenses distributed to each RGB pixel, and under these, photodiodes that change the light into electronic signals are distributed to each one. However, with a Dual Pixel CMOS AF sensor, two photodiodes are distributed to each microlens. As a result, two parallax images are captured at once. With Dual Pixel CMOS AF, signals from these two images are used to carry out phase-difference detection AF. In addition, by combining two photodiodes, the image signal can be output as one pixel. This is an important point. So, as AF and the imaging function are combined in one pixel, it was possible to expand it to all pixels. Maintaining image quality and increasing the number of AF capable pixels is definitely an advantage. Image quality is absolutely not affected in any way.”

Koichi Fukuda, another development leader at Canon, states that “As AF pixels are distributed over the entire sensor surface, a broad area of the Live View screen, final focusing with phase-difference detection AF over approximately 80% (vert.) x 80% (horiz.) is possible. As a result, not only is AF speed improved, but focus precision of points of light in night scenes which was a problem of contrast AF before is now improved. Tracking performance of subjects with movie servo AF is also significantly improved. Also, in comparison with Hybrid CMOS AF which uses contrast AF at the same time, there is no unnatural behavior as the lens searches for the focal position, making even smoother, more natural focus possible.”

These are some of the claims from Canon regarding the system, published on a 8-page pdf document you can download and read entirely if you’re curious about the technology. You can also download another pdf document, from 2014, with a list of 103 lenses compatible with the system, a number which is growing as new lenses for Canon’s cameras come out.

Dual Pixel CMOS AF technology has been designed for two shooting situations – Movie recording and Live View shooting. EOS Movies allows users to capture movies with a narrow depth of field, however a level of skill is required to do so with accurate focus. Dual Pixel CMOS AF has been developed to make it easy for new photographers to capture videos and easily control focus as the subject moves across the frame. With Dual Pixel CMOS AF, the management and control of focus in movie mode is quicker and smoother than ever before – perfect for shooting, ensuring there isn’t a drop in focus as the scene unfolds and subjects move around the frame. 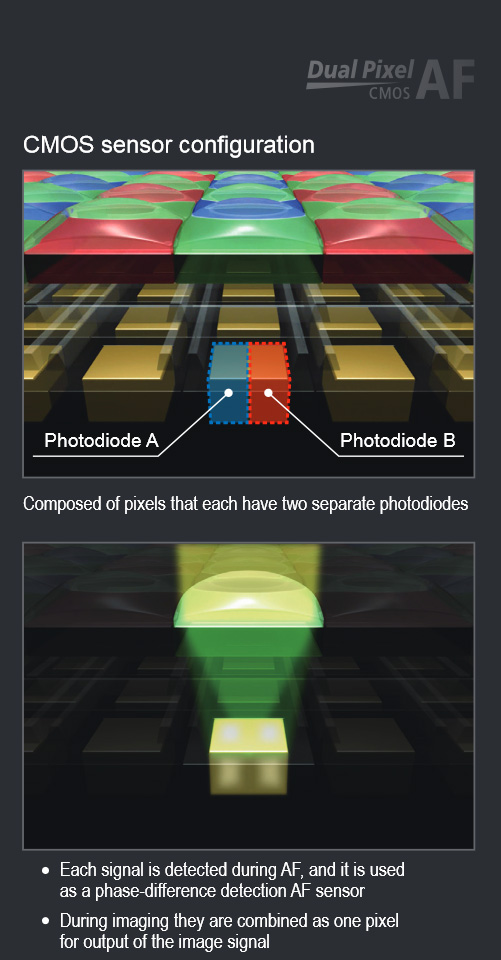 Dual Pixel CMOS AF was also developed to improve the AF speed when users shoot in Live Mode. The new AF technology has been designed to allow photographers shooting with the high resolution Vari-Angle LCD to acquire quick autofocus, similar to the AF speed when shooting using the viewfinder.

Canon’s idea with the system was to make video shooting accessible to more people, but does it mean that the technology is only for photographers shooting video, newcomers to video and the general public aiming to capture video of their families? Aren’t professionals interested into AF? Well, if you browse through the web you’ll find multiple comments suggesting that, once the initial suspicion is over, videographers are using the technology as and when needed. What makes complete sense, I believe.

Seattle documentary filmmaker Dan McComb wrote on his blog that “Canon C100 Mk II autofocus is a game-changer for documentary”, commenting also that “when I was a young photojournalist in the early 90s, I remember the disdain that old-salt photographers had for autofocus. “Forget autofocus,” they told me. “It’s not for pros.” The technology was still in its infancy in those days, but today, you’d be hard-pressed to find a photojournalist who doesn’t routinely depend on it.”

Motion picture is another story, continues Dan McComb. ”Most cinematographers feel the same way about autofocus today as still photographers did 20 years ago. But change is coming, and it’s has a name: Canon Dual Pixel CMOS AF. First introduced on Canon’s EOS 70D digital SLR camera in 2013, Canon has for the first time made autofocus a standard feature in their Cinema series cameras with the introduction of the C100 MkII. But does it really work?” 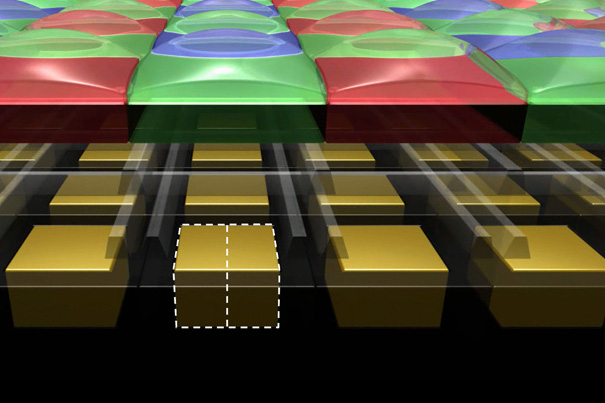 To read the whole article, visit the author’s website. But let’s move on and look at a note on Abelcine’s website, titled “The Core Technology Behind Canon’s Dual Pixel AF”, published in August 2014. There one discovers that “AbelCine organized a focus group with select cinematographers and specialists from Canon to review the new Dual Pixel Auto Focus (DAF) upgrade for the C300 camera. The consensus was that for $500, this is a feature worth many times its cost, as it expands the universe of the types of shots that can be achieved.” Still not convinced?

In one article about the C300 Mark II published November 18, 2015 at StudioDaily the author writes that “Although most cinematographers would shun auto focus, Canon’s dual-pixel CMOS AF is the one technology that might change the way you operate your camera, especially if you’re a single shooter. Originally introduced on the 70D DSLR, Canon also employed the technology on the C100 Mark II last year and now the C300 Mark II, where it hits a focus range of 80% of the horizontal and vertical area of the image. I also tried the new AF system with my 18–135mm STM lens and, although it doesn’t employ touchscreen AF like the 70D for rack-focus moves, it does move swiftly, yet organically, on moving objects. Also, the face detection works like a charm. Dual-pixel CMOS AF is the single shooter’s secret weapon.”

In March 2014, Dan Chung, from NewsShooter, wrote this about the system :

“After a short time with the Dual Pixel CMOS AF system I don’t think I would want to live without it again for documentary or news shooting – it’s that useful. It speeds up my shooting speed greatly; so far, I believe that when using this hybrid AF/manual focus technique I get far more shots in focus than I would just focusing by hand.” To read the full article visit NewsShooter website.

We could stay here all day enumerating comments suggesting that Dual Pixel AF works… but I believe these notes will help you to believe the technology is really working for many users. Let me end with a comment by a user named NorBro, published at DVXuser: “The DPAF is my new passion, haha. Some of the run-and-gun work I do can be so stressful and difficult because multiple things may happen quickly and even all at once that manual focusing is just not ideal. After looking at over 750 clips from a recent shoot, the continuous AF nailed 95% of my shots in the 2 modes (I still haven’t tried face tracking yet). Although, it’s worth mentioning it was all outside (lots of light).”

Is the Dual Pixel AF the solution to all problems and the end of the focus-puller as a profession? Obviously not! But as many of the people who tested it and use it suggest, it is a new and reliable tool in the toolbox of many videographers, one that, if availalbe, should be used when the right conditions arise. Isn’t that what technology is for?