A message from Canon U.S.A. on the company’s website notes that due to the cancellation of NAB Show 2020, Canon will digitally stream the company’s announcements close to the date NAB would start. 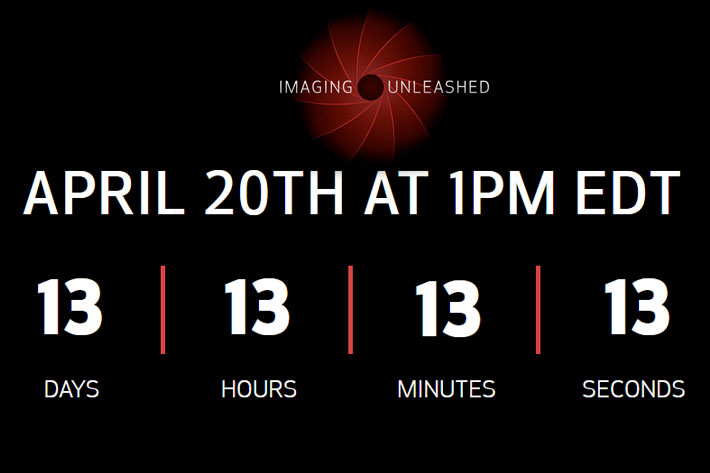 Canon will have a virtual presentation of its “new professional products and technologies!” on April 20, 2020. Will the new Canon EOS C300 Mark III be announced then? Will it be 8K?

Canon continues, as so many other companies around the world, to monitor the global response surrounding the spread of COVID-19, the effects of which have impacted every aspect of our lives. Canon’s staff remains in safe remote working conditions, but the company knows it needs to keep in touch with partners and customers, so, in an effort to share its product and technology, Canon has announced it will digitally stream its announcements starting at 1:00pm EDT (10:00am PDT) on Monday, April 20, 2020. 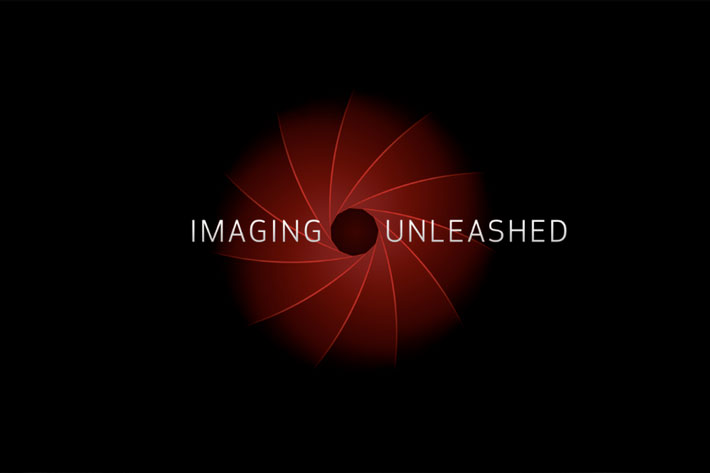 The  message from Canon U.S.A. says that “with respect to those working diligently to contain the effects of this virus, and those documenting the stories, and fulfilling the public’s need for news and information, Canon has decided to move forward with the introduction of new products and technologies that will continue to bring us the stories of triumph, hope and humanity.”

The move online comes after the cancellation of NAB Show 2020, about which Kazuto Ogawa, President and CEO of Canon U.S.A. Inc., said “In light of the current developments regarding COVID-19, including the recent declaration of the virus as a global pandemic by the World Health Organization, we agree with the association to not move forward with the 2020 NAB Show as planned and applaud them for making the difficult, yet prudent decision. At this time, decisions and actions need to err on the side of caution and support the safety of everyone. We firmly believe that the health and well-being of the general public takes precedence over business during this critical period.” 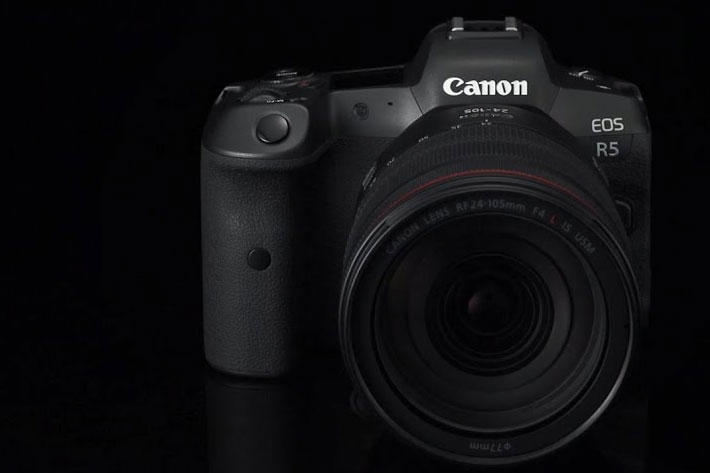 Now, following the same logic, Canon announces its own virtual conference, a moment when everybody expects to know more about the availability of the EOS R5, but also about the rumored new Cinema EOS model, the Canon EOS C300 Mark III. What will the new EOS C300 Mk III be? With the EOS R5 offering the ability to internally record 8K using the full width of the sensor at up to 30p, the latest Canon EOS R camera is set to redefine mirrorless with its market-leading features. In addition, in all 8K modes it will support Canon’s Dual Pixel CMOS AF, which has always been an asset over other models.

So, if the EOS R5, which is touted as a revolution similar to what the EOS 5D was 15 years ago, is able to achieve what many said were “impossible” features, far exceeding what competing cameras in the same segment offer, what can one expect from the Canon EOS C300 Mark III? Many would like it to offer no less than the EOS R5, meaning the next Cinema EOS camera from Canon would have to be an 8K camcorder. They will probably have to wait a little longer… 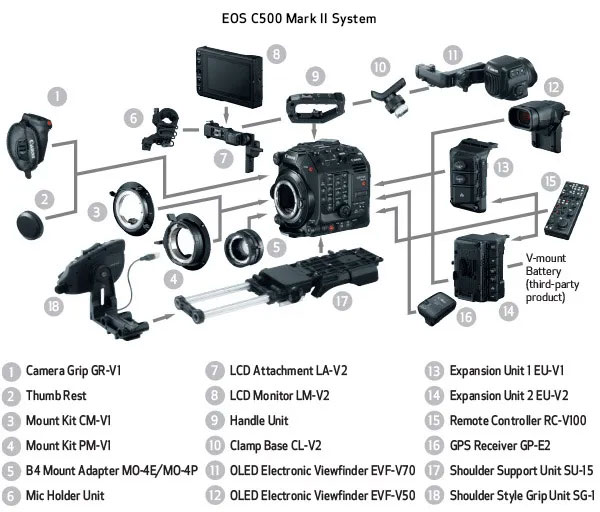 The Canon EOS C300 Mark III will bring the C300 line to the same place the C500 MKII is now. The new modular design of the EOS C500 Mark II, introduced in 2019, allows users to optimize and customize the camcorder to specific shooting needs. Accessories and expansion units can be easily attached to provide different levels of functionality. This is a major asset for a cinema camera, meaning it is equally at home fully rigged with a large zoom lens, FIZ unit, audio accessories and rangefinder as it is stripped down flying on a drone.

There is no doubt that the experience Canon will gather from the EOS R5, when it is made available, will help to define the evolution of 8K, and the development of a Cinema EOS camera upping the resolution is expected to be announced towards the end of the year. But for now, it’s probably a modular Canon EOS C300 Mark III that the company will announce this April.

According to the latest information (or rumors) published by the website Canon Rumors, the Canon Cinema EOS C300 Mark III will have a 4K Super35 sensor developed from scratch, with the capability of recording 4K up to 120p with Dual Pixel CMOS AF and without crop in Cinema RAW Light format. 2K at 150p is also mentioned. The camera will also offer a “dual ISO” function when recording in XF-AVC, and  an anamorphic de-squeeze function and false-color built in for monitoring (with the C300 Mk II you had to use an external monitor with these functions). 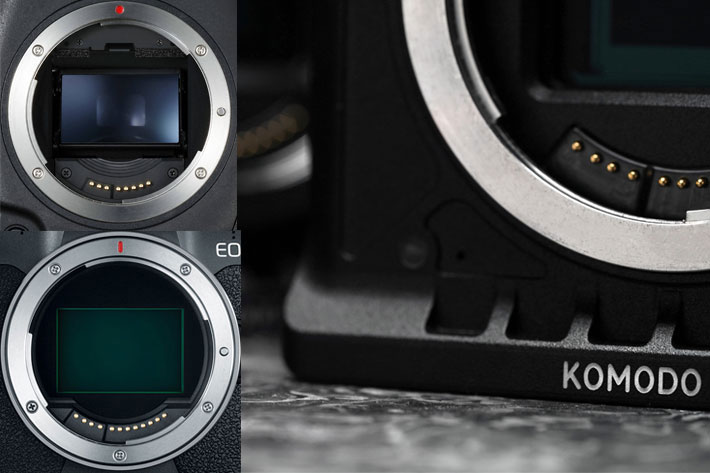 Is RF mount the future for Cinema EOS?

Also according to Canon Rumors, Canon will announce a new Cinema lens alongside the new camera body. Although many users want to see the RF mount being used in the Canon Cinema EOS cameras (with the option to change it for either EF or PL), it is not clear, at this moment, if Canon will effectively go in that direction, as the available converters allow to use RF lenses. Again, Canon Rumors has suggested that a new Canon EOS C100 Mark III cinema camera “could be the first Cinema EOS camera with an RF mount “out of the box” and would introduce a new form factor for the lineup“, but that is not confirmed.

RED was the first company to show a RF mount, on its Komodo, although the first cameras, according to Jarred Land,  follow the EF protocol first  “since that is the majority of lenses out there right now. It will take us time to get those all EF lenses programmed in and the new autofocus on top of that, so native support for RF lenses will most likely not be there at launch. “

Canon will probably shift to RF mount in its Cinema cameras, as the new lenses open new possibilities, according to Canon’s own marketing, but it may take them some time, because there needs to be a critical mass of RF users before the company shifts from EF, which has been the key lens mount for Canon for decades now. Much of the “information” now available is mostly wishful thinking, but the online conference coming on April 20 may shed some more light on Canon’s plans for the future.

Canon promised a EOS R camera with 8K video internally and here it is: the R5. Along comes the...