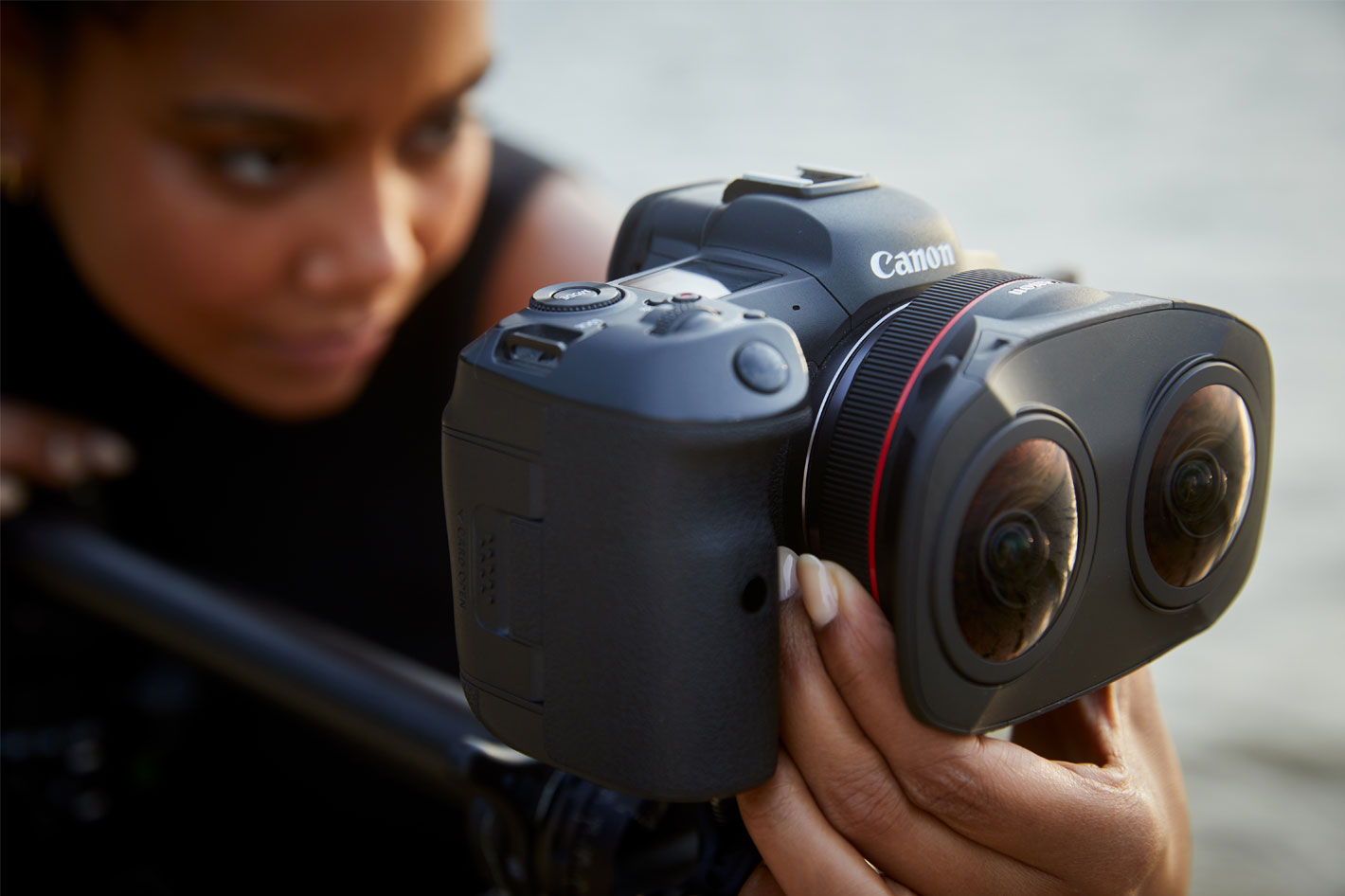 Now you can see Virtual Reality through a new lens, and I mean it literally: Canon announced their first dual fisheye lens for stereoscopic 3D 180° VR capture in 8K, a tool that will open new horizons to the next generation of immersive storytellers. All they need to do is pair the new RF 5.2mm F2.8 L Dual Fisheye lens with a Canon EOS R5 mirrorless camera, and the magic will happen. Well, you will also need a few other things…

The new RF5.2mm F2.8 L Dual Fisheye lens does not appear in a vacuum. In fact, the lens brings stereoscopic 3D virtual reality (VR) capture to the EOS R5 camera as part of the EOS VR System, which also includes a future firmware update for the EOS R5 camera to support use of this lens with new VR shooting specific functions, as well as new upcoming Canon EOS VR software solutions for conversion and processing.

So, Canon is developing an EOS VR System, paving the way for an easier creation of more immersive content. The pair RF5.2mm F2.8 L Dual Fisheye and EOS R5 will “talk” through an upcoming firmware update version 1.5.0 or later, and with use of Canon’s EOS VR Utility or EOS VR Plug-in for Adobe Premiere Pro paid subscription-based software solutions (both currently in development – availability and details to follow on or about early 2022. Viewing in 3D requires a compatible Head Mount Display… as obvious! 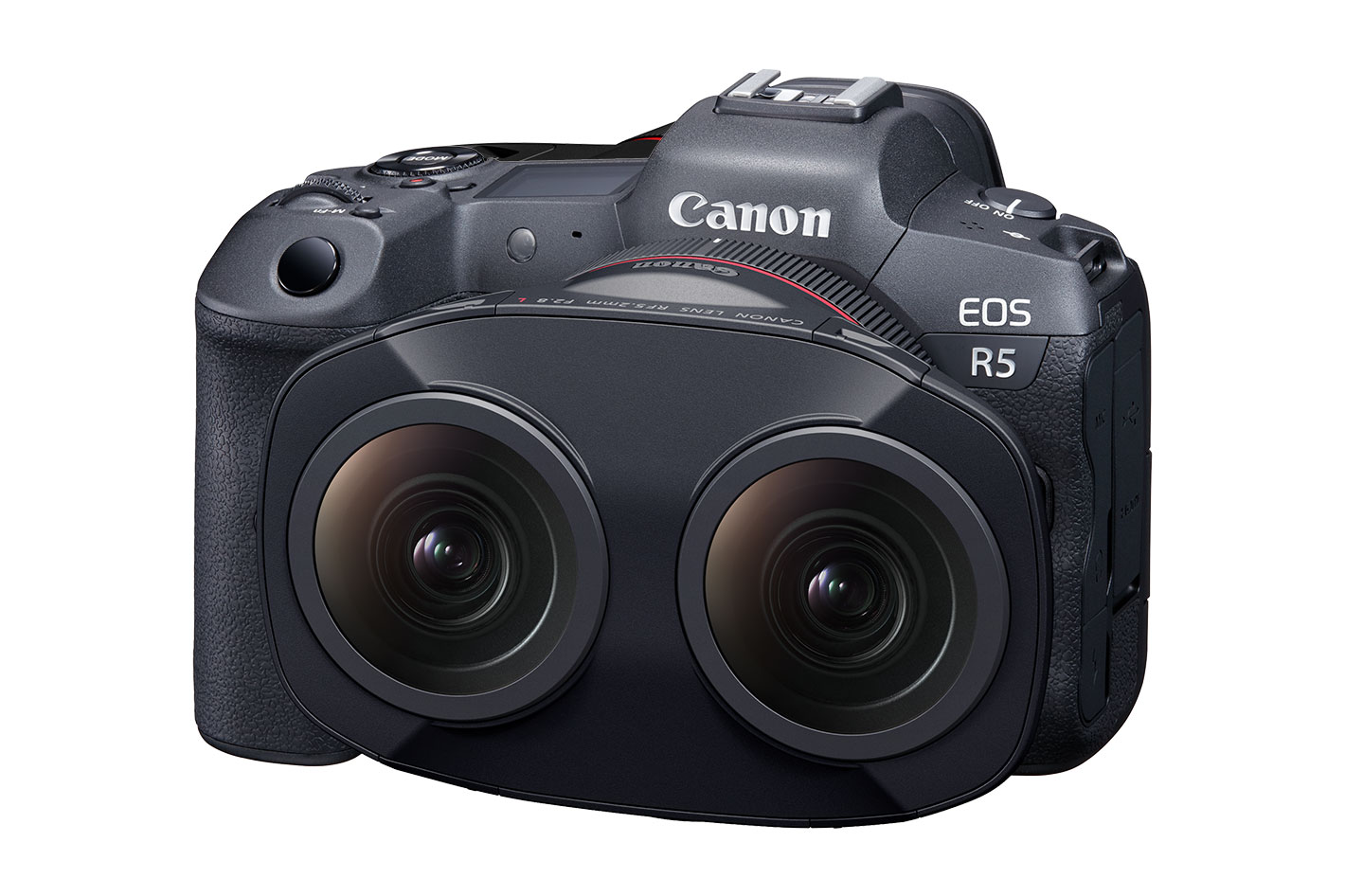 A step forward in VR capture

The introduction by Canon of the world’s first digital interchangeable dual fisheye lens capable of shooting stereoscopic 3D 180° VR imagery to a single image sensor (as of October 5th, 2021, among all lenses for digital interchangeable lens cameras, based on Canon research) is a step in the right direction, as Canon states, “the complexities of virtual reality production and the ability to view the content in full capacity, are greatly streamlined for seasoned professionals and newcomers to the craft”, but one thing worries me: the company only mentions one headset, the Oculus Quest 2.

In order to truly experience the captured content by Canon’s EOS VR system in its truest form, the company says, “a compatible VR headset is recommended for use such as the Oculus Quest 2, allowing the viewer to immerse themselves in the content — by simply moving their head to provide a vivid, incredibly wide view.” I hope this note is just a marketing simplification and not a suggestion of compatibility limitation, for a variety of reasons.

Oculus Virtual Reality headsets are popular, no doubt, but since the introduction of the Quest 2, it has become mandatory to have a Facebook account, which is something many users don’t want to. Furthermore, as many people all around the world discovered recently, when Facebook goes down, it’s not just WhatsApp and Instagram that follow: Oculus services went down too, meaning Oculus Quest 2 became an expensive paperweight for some six hours. 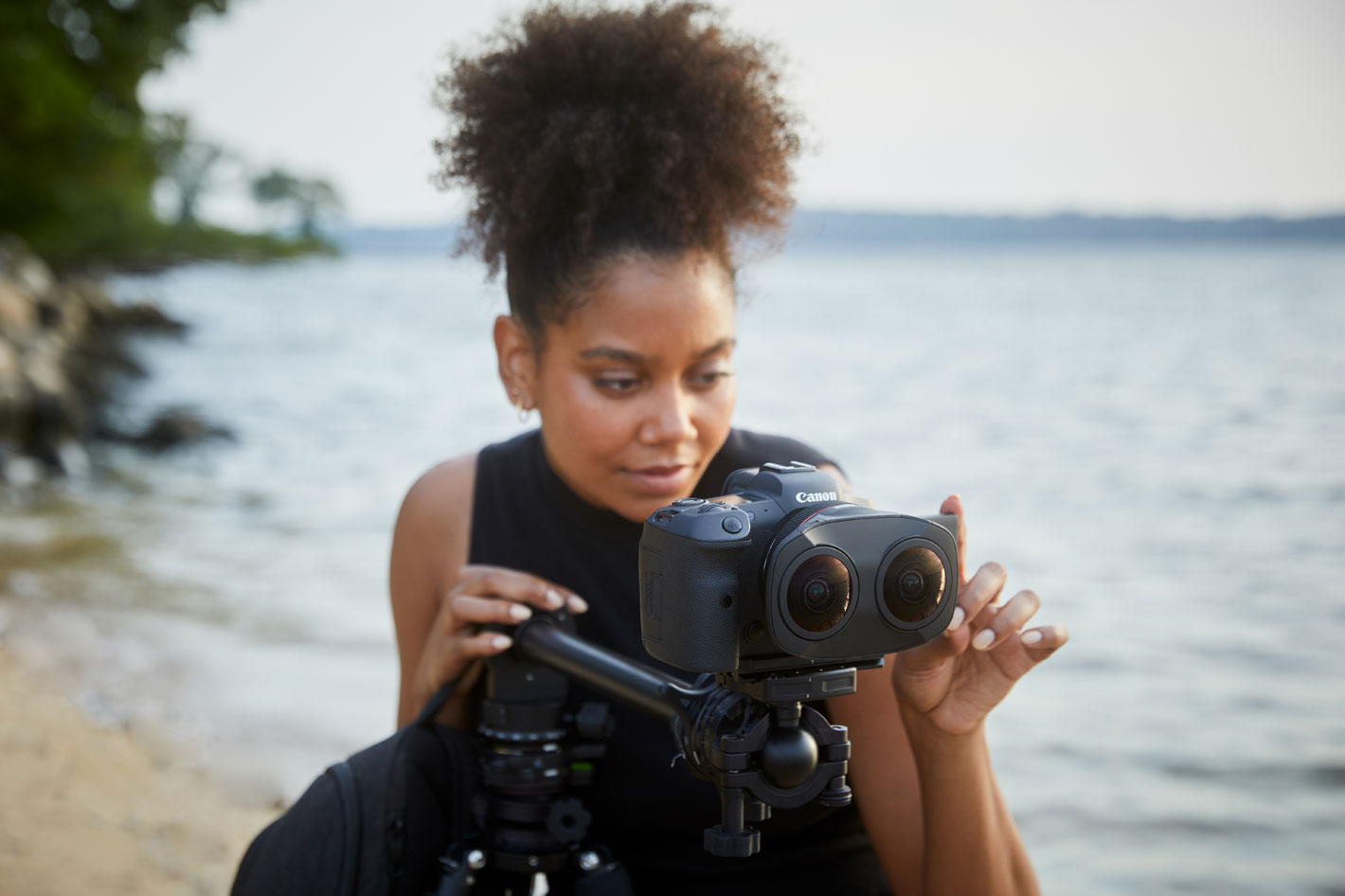 Canon’s first entry into the world of VR capture

Another aspect to consider is that the Quest 2 is the less powerful of the popular VR headsets available and is also the one with less resolution. Furthermore, the fact that it is not a tethered VR headset means it can not run the most computer intensive apps, unless graphics are downgraded. I am aware the industry is moving to a common standard, OpenXR, which will probably make it easier to use different headsets, but until that happens, I hope Canon considers support for headsets from different brands, from HP to Valve, which is said to have a new VR headset project – code named Deckard – that will compete with Quest in terms of portability… without the need for a Facebook account.

“At Canon, we innovate so creators can push artistic boundaries, and this commitment to innovation is what led us to introduce the new RF5.2mm F2.8 L Dual Fisheye lens. As Canon’s first entry into the world of virtual reality image capture, the EOS VR System represents an important milestone in our company’s rich history as a lens manufacturer and welcomes a bright future for VR content creation,” said Tatsuro “Tony” Kano, executive vice president and general manager of Canon U.S.A.’s Imaging Technologies & Communications Group. “This new RF lens produces a stunning 8K virtual reality image and sets itself apart through its simplified workflow. Our goal is to make immersive storytelling more accessible for all.” 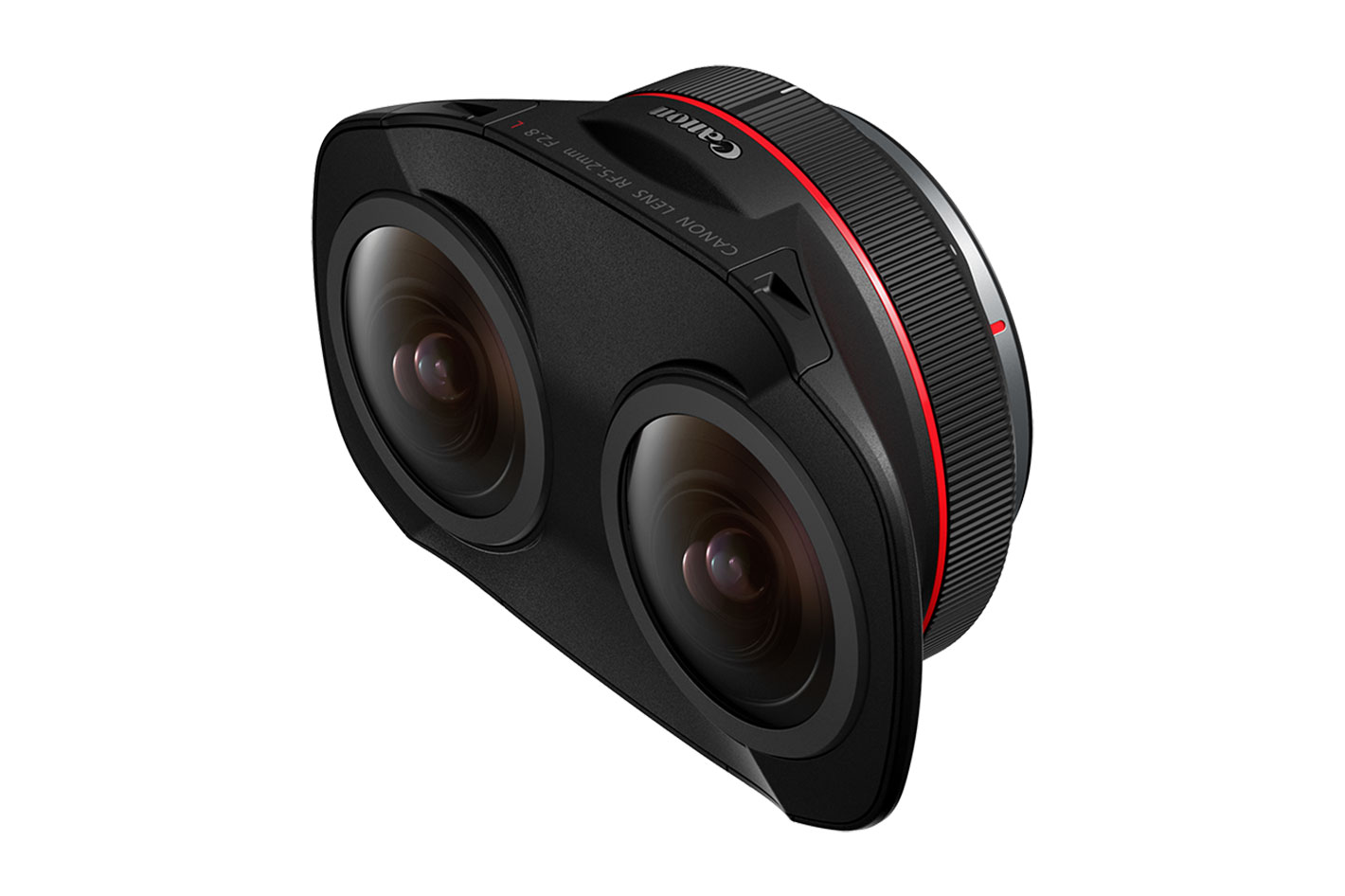 Here is some more information about the RF5.2mm F2.8 L Dual Fisheye lens as provided by Canon:

The RF5.2mm F2.8 L Dual Fisheye features high-quality L-series optics engineered with an interpupillary distance of 60mm for delivery of 3D imagery in VR with natural parallax closely resembling human vision when viewed through a compatible headset. With a 190 degree field of view captured from two separate optical systems they deliver outstanding results for 180° VR viewing platforms. With subwavelength coating technology offering impressive flare control in backlit conditions, VR creators can have freedom to shoot regardless the time of day, or position of the sun.

The dual fisheye design provides versatile exposure control with a maximum aperture of a bright f/2.8 to a deep depth of field of f/16 with electronically controlled apertures allowing the dual fisheye lens to operate just like other RF mount lenses. Between the dust and water-resistant sealing and fluorine coating of the lens and the robust build of the EOS R5 camera, this System delivers peace of mind even in challenging weather conditions. Canon’s free Camera Connect app and Canon’s EOS Utility program both will be updated in the future to offer remote control live view functionality for monitoring purposes while on-the-go.

The EOS VR System’s convenient workflow is a standout feature. Accomplished by recording left and right fisheye images to a single full-frame image sensor, this design helps to solve common VR challenges of stitching and synching, by outputting one single image file. Canon is currently developing two paid subscription-based software solutions as available options for completing the post-production process. Canon’s EOS VR Utility will offer the ability to convert clips from dual fisheye image to equirectangular and make quick edits, as well as select the resolution and file format before export. With the EOS VR Plug-In for Adobe Premiere Pro, creators will be able to automatically convert footage to equirectangular, and cut, color, and add new dimension to stories with Adobe Creative Cloud apps, including Premiere Pro. 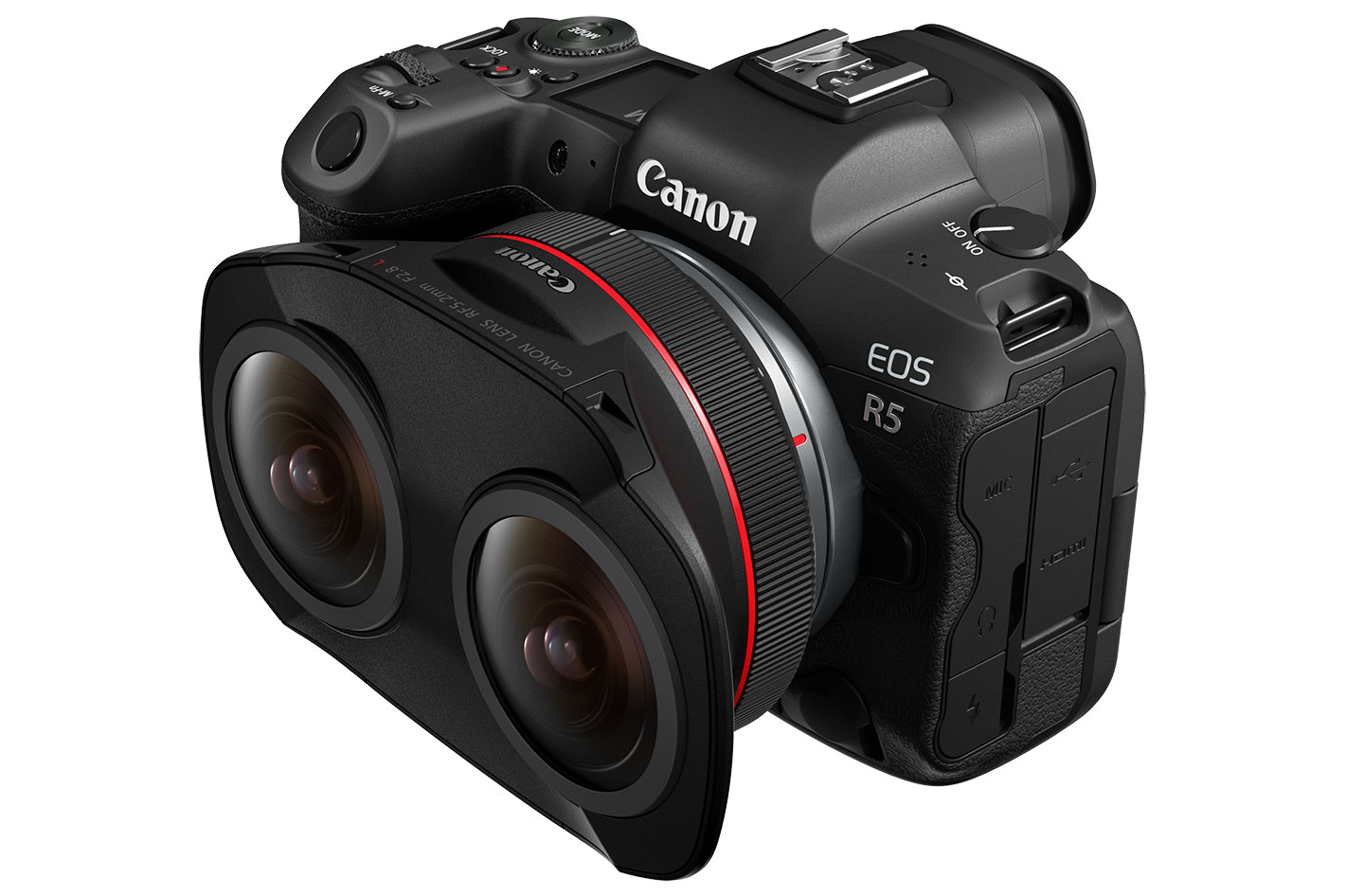 Will there be a plug-in for DaVinci Resolve?

One important note here: Canon is entering the subscription model world with, as the company says, “two paid subscription-based software solutions” for VR processing. Another aspect that is not clear now is compatibility with different NLEs. The information now available points to an EOS VR Plug-In for Adobe Premiere Pro, with no word about other video editors. I’ve asked Canon if a plugin for software as DaVinci Resolve will also be available, but I have not yet received an answer.

So, back to the story, the RF5.2mm F2.8 L Dual Fisheye lens is compact, lightweight, and portable, meaning it is easily packed in a camera bag to help the creator tell unlimited virtual reality stories.

The Canon RF5.2mm F2.8 L Dual Fisheye lens is scheduled to be available in late December 2021 for an estimated retail price of $1,999.00. In addition to the lens, both of Canon’s EOS VR Software solutions (EOS VR Utility and the EOS VR Plug-in for Adobe Premiere Pro) are currently scheduled to be available in late December 2021. Both software solutions will be available as a paid subscription based model, but will offer free trial periods (details to be disclosed at a later date) as well as the ability to process still images and certain clip lengths for free. For additional information, check Canon’s website.