The question started to be raised mid-February: will NAB happen this year? With the COVID-19 outbreak and many events cancelled, an event that gathers people from around the world had to raise questions. 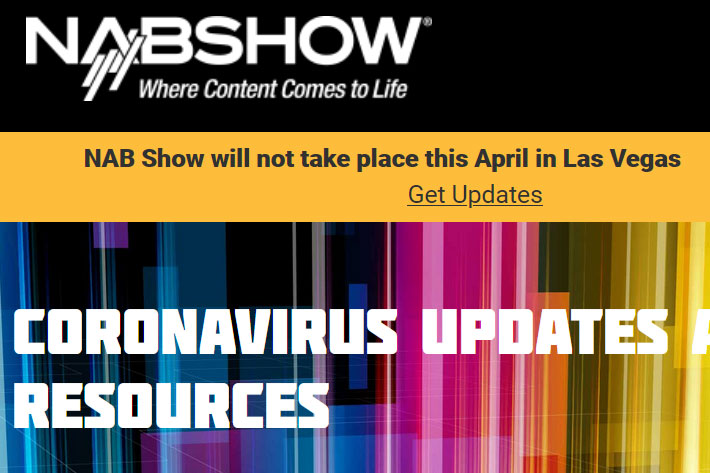 Until the morning of today, March 11, the 2020 edition of the NAB Show was “proceeding as planned”, according to the official page, despite the fact that some companies had decided to not participate in the show. Now, the biggest industry event is cancelled.

The new update to the NAB Show 2020 website made it clear:

NAB has been monitoring the evolving situation on coronavirus both in the U.S. and around the globe. Due to the public health emergency we are currently facing, we believe that it is not possible to move forward with NAB Show as planned. Please see below for a message from NAB’s president and CEO Gordon H. Smith, along with some FAQs about the decision.

NAB’s president and CEO Gordon H. Smith, wrote that “This was not an easy decision. Fortunately, we did not have to make this decision alone, and are grateful to our NAB Show community for engaging with us as we grappled with the rapidly-evolving situation. This Show is as much yours as it is ours, and it is important to us that we move forward together.”

For nearly 100 years, he added, the “NAB Show has provided superior value and the best possible experience for exhibitors and attendees. We knew that if we could not deliver on those expectations, we would not move forward. More importantly, keeping the community safe and healthy is NAB’s highest priority; therefore, we are deferring to the developing consensus from public health authorities on the challenges posed by coronavirus.”

Exploring alternatives to the NAB Show

The organizers are still weighing the best potential path forward, and, said Gordon H. Smith, “we ask you for your patience as we do so. We are committed to exploring all possible alternatives so that we can provide a productive setting where the industry can engage with the latest technology, hear from industry thought leaders and make the game-changing connections that drive our industry forward.”

To read the whole note from NAB about the cancellation, of the NAB Show 2020, follow the link. You’ll also find a FAQ which will offer answers to many questions that may arise. It’s, no doubt, a sad day to the industry, as this – to some expected change – represents a hard blow to not only the organizers but many companies that wanted to use the show to share their new products. Cancelling NAB affects negatively the whole industry and each individual that depends on it.

I started to write this piece of news long before the official word from the organizers confirmed what many suspected: NAB 2020 is not going to happen. Mid-February, when I wrote about two events cancelled that month, the CP+ photo show in  Japan and the Mobile World Congress in Barcelona, key events for companies from Canon to Sony to show their products, I asked if we would see more shows being cancelled. At the time I pointed to Photokina, whose edition this year, in May, aims to be a relaunch of the classical event that has lost importance in recent years.

There are no news from Photokina, yet, but as the region of Cologne, in Germany, is one of the hot spots for the outbreak of the coronavirus, the sad reality is that Photokina may not happen. We’ve seen it happen now to events all around the world, and ProVideo Coalition mentioned, in the recent days, how AJA withdrew from NAB Show 2020, Nvidia and Facebook cancelled their events, opting for online conferences, while many other companies, Intel, IBM, Microsoft, Verizon, Epic Games, Unity or Electronic Arts, have changed plans. And companies from Adobe to Avid dropped out of NAB.

The first time in NAB’s history

Now, it’s time for the NAB Show 2020 organizers to say that the show is cancelled. The event will not fill the Las Vegas Convention Center from April 18 until the 22. On March 03, the organizers noted that they continued to “closely review all guidance from global, federal and local health authorities to implement what is needed for the good of our show community and the good of our industry” and that the “NAB Show is committed to ensuring our response during this challenging time is responsibly based in facts, not driven by fear”. But right after the coronavirus outbreak in the United states painted a very diferent picture, which has become darker each new day until March 11.

It’s not fear but caution that made the NAB Show 2020 organizers take the difficult decision to cancel the event. NAB Show is the premier event driving the evolution of media and entertainment and it attracts 1,600 exhibitors and 90,000 attendees, a mass gathering that despite all efforts would be difficult to keep safe due to how much we don’t know, yet, about the COVID-19. So, the sound decision, no matter how hard it is to take, was to cancel the NAB  show, something that happens for the first time in the show’s history.

Now another question will start to be asked: will the Cine Gear Expo, due to happen at the Paramount Studios in June 4-7, 2020 take place?