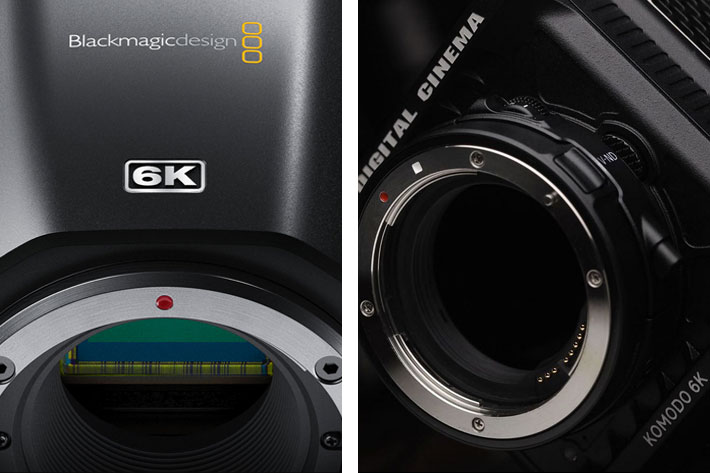 The new Komodo 6K camera from RED is still a mystery, but it uses Canon’s new RF-mount, giving it access to, as Canon says, some of the best lenses ever built. Is it a reason to forget the 6K BMPCC?

The new Blackmagic Pocket Cinema Camera 6K introduces a change in mount for the system, using Canon’s EF-mount instead of MFT, but many believe the new RF-mount from Canon should have been used. And yes, there is a new cinema camera coming, from RED, that uses Canon’s full frame mirrorless mount: it’s the Komodo, and RED showed more about its new 6K camera at the same time Blackmagic Design announced its new 6K model.

Available immediately for $2,495, the Blackmagic Pocket Cinema Camera builds on the popularity of the Blackmagic Pocket Cinema Camera 4K, but has a larger Super 35 sensor size with 6K resolution, allowing higher image quality. Body dimensions are very similar, despite the larger lens mount, but the sensor change gives not only more capture area, but opens the path to use a whole new set of lenses. 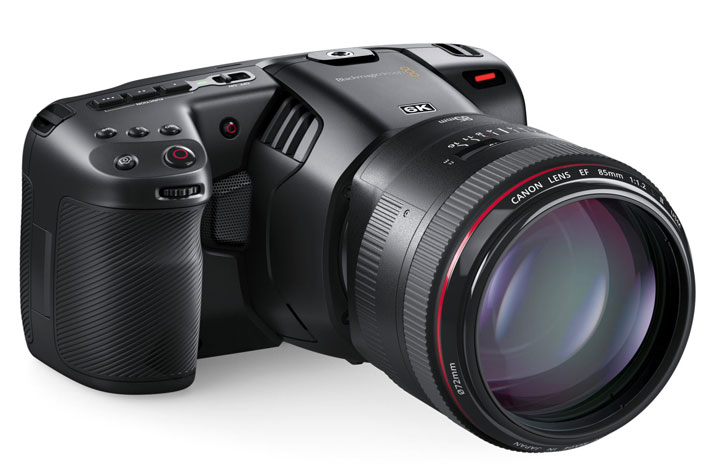 Advantages of the EF-mount

The EF lens mount model works with a wide range of lenses from companies such as Canon, Zeiss, Sigma and Schneider, says Blackmagic, while also pointing to other features of this new model: the ability to create cinematic images “with shallower depth of field, allowing creative defocussed backgrounds and gorgeous bokeh effects! Extra resolution also gives you more room for reframing in editing and color correction. This means that you can shoot in 6K and then in post production zoom and re‑frame to allow wide shots and close ups to be created, all from a single camera and without losing image quality!”

At almost double the price of the 4K model ($1295) the new 6K version is, no doubt, a different camera, that will appeal to many people, owners of the BMPCC 4K included (Blackmagic Design, apparently, lets you opt for the 6K model if you’ve ordered a 4K and have not yet received it). The bigger sensor is a good reason to upgrade (if you REALLY need it!), but so is the EF-mount, which is the most popular option these days, and gives access to a huge collection of lenses. Still, many hoped that Blackmagic Design would go for a full frame sensor, as the S35 sensor in the BMPCC 6K will reduce the field of view of wide-angle lenses. 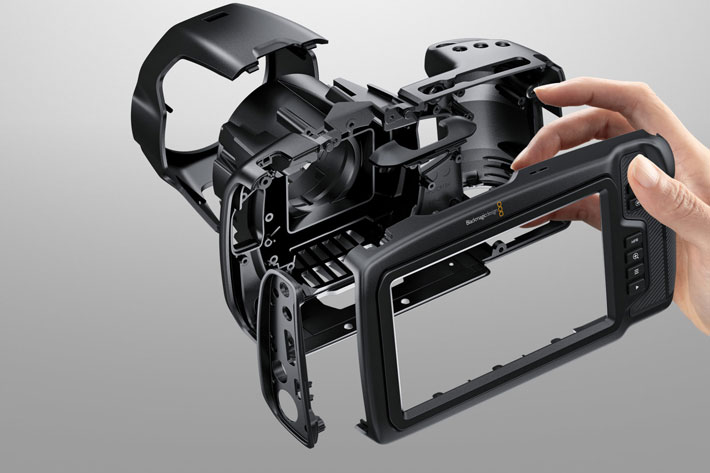 It’s never easy to satisfy everybody, and while the BMPCC 6K will be the reason for some to move away from Micro Four Thirds, others will still prefer to keep with the format, and their BMPCC 4K, because of the type of work they do. In terms of the mount used, the move to EF is clearly an advantage, according to the reaction from many users – and that’s probably one of the reasons why Blackmagic Design made the camera – while others dream of the day the company will use a PL mount and some others, yet, believe the right camera should have Sony’s E-mount, forgetting that Sony does not license its mount to others.

A full frame sensor would also be a “must have”, according to others, but that’s another story all together. Let’s look, instead, at the lens mount, because many believe that the BMPCC 6K should have a Canon RF-mount, instead of the EF-mount chosen. It is easy to understand Blackmagic Design’s choice, though: the EF lens mount is a popular solution, that has been used since 1987, when Canon radically changed its mount, to a larger diameter mount (54mm internal), the largest among all 35 mm SLR cameras. Designed for Canon’s EOS family of SLRs and kept when digital EOS cameras took place, the EF-mount is used by multiple companies, from Z-Cam to ARRI. Now Blackmagic Design Pocket Cinema Camera also offers it.

Blackmagic Design went, apparently, with the solution that can satisfy the most people in the near future, as lenses for the EF-mount are widely available, while lenses for the new RF-mount are slowly entering the market. Canon’s RF-mount, announced in September 2018 is, in fact, compatible with the EF-mount – and also with EF-S lenses –  using adapters, meaning the camera would offer users the option to work with EF and RF lenses.  That would be the way to go, some people believe, especially because the new optical designs allowed by mirrorless cameras offer, as Canon and other brands claim, better quality. Maybe we will see that in a new BMPCC 8K, at the next edition of NAB?

A company is moving to RF-mount, though, and it is RED. Not much is known about the camera, but the company used every opportunity in recent weeks to keep people talking about its Komodo. Is the “dragon” able to bite a slice of the market the 6K BMPCC aims to capture? Probably not, at least in terms of price, because as Jarred Land posted on REDUser, the camera is only going to be under $5K if you own a Hydrogen One, RED’s smartphone, which Mashable considered to be “the biggest loser of 2018, the worst phone — no, worst product — released this year”. A smartphone that promised much and never delivered, despite its price of $1,294.99. 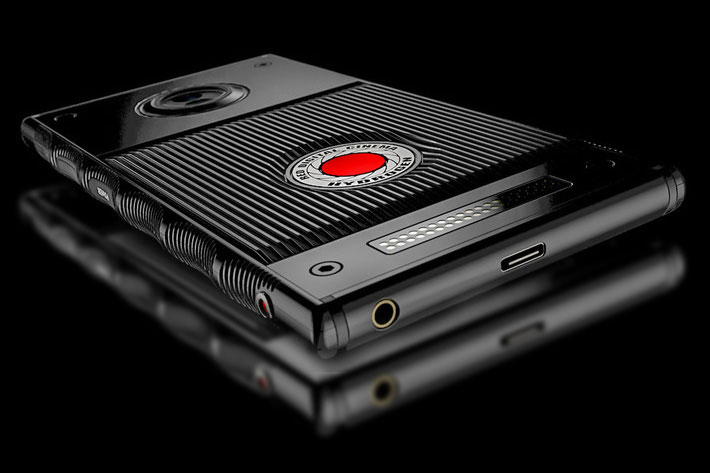 RED Hydrogen One, the worst product of 2018

Now there is a new Hydrogen Two smartphone in the works and owners of the Hydrogen One “will get significant preferential treatment for the HYDROGEN Two and/or new Cinema Camera model, both in delivery allocations and pricing” said RED’s founder James Jannard, suggesting that something new was coming. That something is the Komodo, which by the end of July Jarred Land mentioned in a post at REDUser, stating this:

“I told everyone that I wouldn’t reveal Komodo until it was ready.. There still is a bunch of time before the first batch starts shipping towards the end of the year and everything can and probably will change.

But in the spirit of discovery… perhaps I can still stay inside those rules and tell you what Komodo is not:

O.. and since Komodo is alive and breathing and you will probably see it pop up over the next few weeks and months in the hands of some very talented people banging on it to try and break it… I guess I can at least leave you with this……”

While the Komodo conversation at REDuser continues, and is now 40 pages long, with the most diverse ideas about what the new camera/module is, new images published confirm that the RF-mount is used, and we also know the camera uses CFast memory cards, as at least one image indicates. Again, even at REDuser, despite the applause from many because of the mount used, that some believe to be the future, there is people asking for a Sony E-mount, forgetting that Sony keeps the mount exclusively to its cameras.

Komodo’s sensor size is still a mystery, and has kept people exploring the most diverse ideas, supported by drawings, some closer to science-fiction than science, but it’s probably Super 35, meaning it will compete with the Blackmagic Pocket CC 6K, which costs half of the price, as it seems. So, in the end, despite the eventual – and in many cases theoretical – advantages of the RF-mount, the RED Komodo (dragon) will not defeat the Blackmagic Pocket Cinema Camera 6K, which has, one could say, a very attractive price for anyone wanting to step up to 6K and a popular mount, as the Canon EF is.

In the end, if this was a fantasy story, I would probably say that no dragon can defeat blackmagic…