Looking at how the OpenColorIO plugin fits into After Effects workflows

OpenColorIO is, currently, a plugin for After Effects.  It’s free, it’s open source, it’s the industry standard tool for color management, and you can download it from the fnord website.  Using OpenColorIO is, in general, a conscious decision to manually use the plugin for color management, as an alternative to the built-in system that After Effects has.

That brings us here – to Part 13 – which was always intended to be a guide on how to actually use the plugin in After Effects. 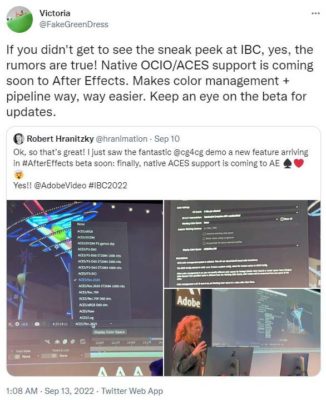 But since the last article was posted there have been some exciting developments.  Adobe have publicly announced that OpenColorIO is being integrated directly into After Effects, offering native support for ACES without the need for a 3rd party plugin.  Not only that, but this new functionality has already made its way into the Beta version of After Effects.  This means that anyone with a Creative Cloud subscription can download the Beta and try out the new color management features for themselves.  As this is still Beta, you have the opportunity to provide feedback through the Beta forums and help shape the future of After Effects.

At the same time, there’s already a lot of other information and tutorials out there on how to use OpenColorIO in After Effects, and how to set up various workflows.  There’s no point me simply repeating the same information, especially when it will become outdated once Adobe release their native OCIO support to the public.

But that doesn’t mean there’s nothing left to cover!

As I said above, using OpenColorIO is a conscious decision to do color management manually, instead of using the built-in color management system.  And this means you need to have a solid understanding of what you’re trying to do, and why.  OpenColorIO was created for use on large scale Hollywood productions, and the ACES workflows that it’s used with are designed to future-proof commercial content.

But where does that leave the average After Effects user, right now?  Do you need to use OpenColorIO, and what should you use it for?  These more philosophical questions are what we look at in this video.

If you haven’t downloaded OpenColorIO, you can find it here. Big thanks to Brendan Bolles for porting it to After Effects!

Once you’ve downloaded the plugin, you’ll want to download an ACES configuration from here.

This was not exactly the video I had planned for Part 13, and apologies that it’s been such a long time since the last part of this series.  But the announcement that OpenColorIO is coming to After Effects is incredibly exciting – and significant – for After Effects users.

This is part 13 in a long series on color management.  If you’ve missed the other parts, you can catch up here: