An overview of the Academy Color Encoding System 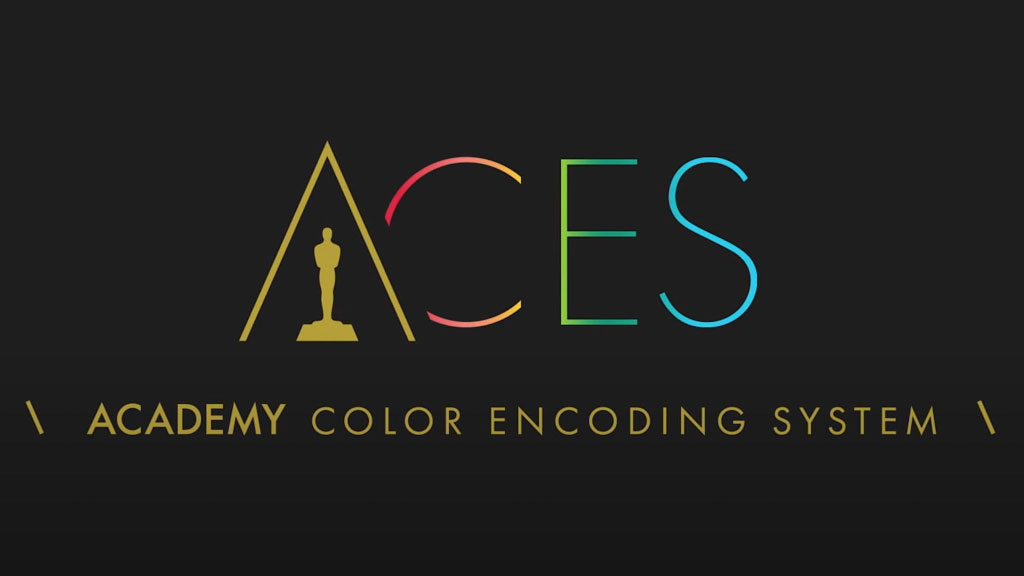 ACES is a hot topic. But it’s not that easy to answer the simple question: “What is ACES?”

And if you’re an After Effects user, what do you need to know – should you care?  One of the reasons that ACES is difficult to cover is that it means different things to different people.  On the surface, ACES sounds like it’s just a colorspace.

So why all the fuss?

It was only one month ago that I posted the article on the After Effects built-in color management system. I began the video by saying that it was easy to guess that Adobe would be overhauling their color management system at some point, but I didn’t know when.  It was a pleasant surprise to wake up last week and see a tweet from After Effects’ Victoria Nece confirming that native OCIO and ACES support was coming soon! 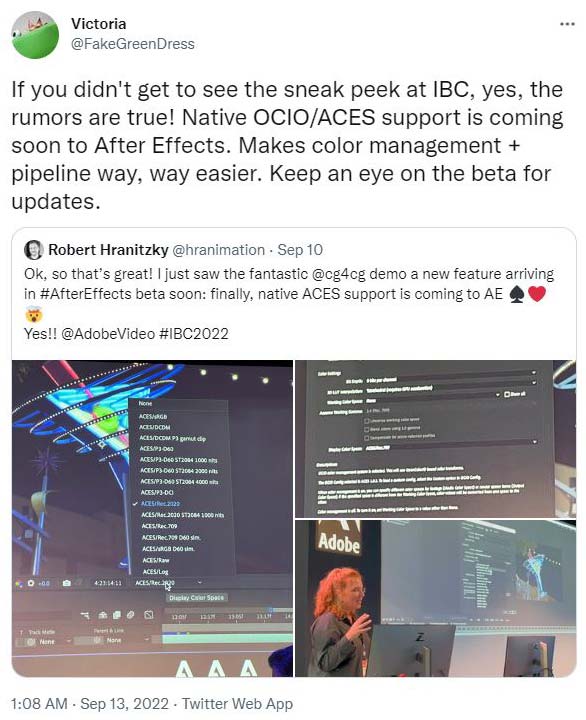 Now that it’s official, we’re going to hear more and more about ACES in the future. So let’s look at the hottest topic in color management – ACES – and some of the reasons why different people are exited about it.

TLA: CTL is the new LUT

This is the longest video so far in this series on color management, and yet there’s still a lot I’ve skipped over.  I probably feel most guilty about not explaining the CTL, so here’s a quick version.

In the last video, on Open Color IO, I introduced the use of LUTs (Look Up Tables) to convert images from one colorspace to another.  LUTs are pre-calculated conversion values, and OpenColor IO is the industry standard tool for organising and applying LUTs in post production.

When AMPAS launched the ACES project, they didn’t just define a few colorspaces.  They also created a new language called CTL, which stands for Color Transformation Language. This mini programming language was specifically designed to convert images from one colorspace to another, implemented in a similar manner to how 3D shaders are written.

Converting images using a mini-program is a step up in sophistication from utilising a pre-calculated LUT.  Converting images using the CTL removes the ambiguity that comes with a long list of numbers.  The image transforms that come with the ACES configuration have been created using the CTL by huge teams of very clever people. As I emphasise in the video, the collection of image transforms are a significant part of the overall ACES project, and for many people the transforms are ACES.

Although I emphasise the significance of the image transforms as part of the ACES project, it’s just as significant that AMPAS have created a brand new tool to perform these transformations.

In the video above I share two quick examples of how the native After Effects color management system compares to ACES.  Perhaps I should have started with them, because you can immediately see the difference.  They’re also a good example of why so many people are excited about the ACES output transforms.  Because the video itself will be heavily compressed and probably viewed on a phone, here are larger versions of the same images..

The first image uses an example from a live-action shoot, captured with an Arri Alexa camera using the LogC colorspace.  Converting the LogC footage to rec709 using the AE system results in overblown highlights. Please understand that this is not some sort of bug.  The highlight data is there and can be recovered with plugins such as the HDR Highlight Compressor – designed specifically for this purpose.  With a bit of grading, you can get a perfectly acceptable result using only native After Effects tools.

But as a direct comparison, the ACES conversion includes tone mapping to preserve the highlight detail and produce a more pleasing image immediately.

And just as significant is the fact that this will match any post production software that also uses ACES.  You could load the same LogC footage into Nuke or Resolve and end up with an identical result.

The next image is even more striking, because the saturated reds produce an even bigger difference between the native After Effects color management system and ACES.  These CG tomatoes were rendered in ACEScg colorspace  by Electric Art in Sydney.  The hot, bright reds are visibly clipped in the left image, while the soft roll-off in the ACES transformation retains all highlight detail and produces a beautiful result, even without any additional grading.

In the video above, I note that some of the people I’ve worked with have been most excited about the ACES rec709 output transform.  Because so much of the industry still relies on the rec709 colorspace (and sRGB), it’s no surprise that this particular topic has been investigated extensively by other online experts. I am indebted to a number of websites / authors that have taken the time to explore the topic and share their thoughts, and if you’re interested in more in-depth explanations then please follow these links.

As this series has always been aimed at After Effects users, I’ll start with a name already familiar to many – Stu Maschwitz, and his Prolost blog.  Stu has been writing about color management, and light and compositing, for many years.  Way back in 2004 he released a free plugin called eLin, which was my first introduction to High Dynamic Range.  His extensive post on ACES covers a lot of the ground we’ve covered in this series, as well as topics that are still coming up.  At the bottom of the article there are some great examples of the ACES output transforms.

But in terms of sheer depth of knowledge, then it’s Chris Brejon’s online book on CG Cinematography that deserves a special mention.  There is simply so much information here, so well presented, and so thoroughly discussed that there’s not much more that I can do except share the link.  If you’ve followed this series so far then bookmark Chris’ site immediately!

When it comes to information about specific colorspaces, then Nick Shaw’s repository on Github has also been a huge help.

Finally, of course, is the ACES central site itself, including the primer PDF that covers far more information than I could hope to.

Now that I’ve introduced OpenColor IO, and I’ve introduced ACES, it’s time to look at how we use OCIO in After Effects.  But although I’m thrilled to know that Adobe are busily integrating native OCIO and ACES support into After Effects, it also means that the next article in this series will soon be outdated!  But that’s a small price to pay for progress.

This is part 11 in a long series on color management.  If you’ve missed the other parts, you can catch up here: