The world’s population is going mobile, according to the number of portable drives by different companies announced at CES 2018: Sandisk, Seagate, Patriot, Dell and Western Digital are some of the names involved. 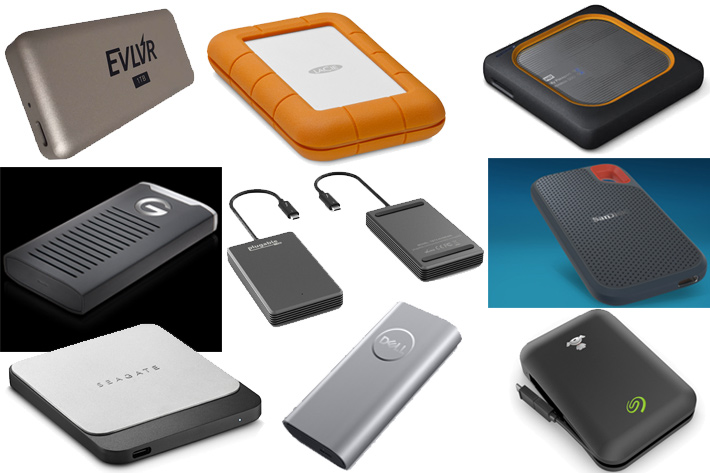 Portable solutions, many shock-resistant, announced in Las Vegas this year suggest the need to access or save data on the go is growing. We pick some of the SSD and HDD solutions announced at CES 2018 or close to the event, for this 2018 guide.

One note before we continue: this guide does not intend to be a complete guide to what the market offers. It is based on a series of new products announced at CES this year and is a good starting point to explore – some of – what is available or will be available in 2018. We included some HDD solutions that may interest readers, but SSDs, as prices come down and speed goes up, seem to be the way forward.

Seagate introduced at the CES 2018 conference a range of new products designed to equip the world’s increasingly mobile population with solutions that solve key challenges they face when creating, processing and accessing their data on-the-go. They were not alone, as other companies, from Western Digital, with its SanDisk and G-Technology brands, to Dell or Patriot,  introduced their own solutions, adapted for different types of users but all promising compact and ultra-fast portable SSDs, allowing us to access data faster, on-the-go and across devices. Or classic HDD, offering reliable storage at more accessible prices.

We’ve already mentioned here at ProVideo Coalition some of the new drives, which you’ll find in different articles, from the one covering the LaCie DJI Copilot, to those about the Sandisk Extreme Portable SSD and other solutions from SanDisk and Western Digital, or the new Transcend JetDrive 825, designed exclusively for Mac. But there is more, in fact, a lot more, justifying the creation of this guide.

“Our world is becoming more data-centric, connected and mobile. This means creating, transferring, storing and accessing data quickly and reliably is critical to unlocking the potential of everything – from data created in the field, to data powering self-driving cars, AI personal assistants or virtual and mixed reality experiences,” said Tim Bucher, senior vice president of Seagate consumer solutions. “At Seagate, we’re constantly pursuing innovative ways to address our customer needs so they can gain a competitive edge in whichever field they play.” 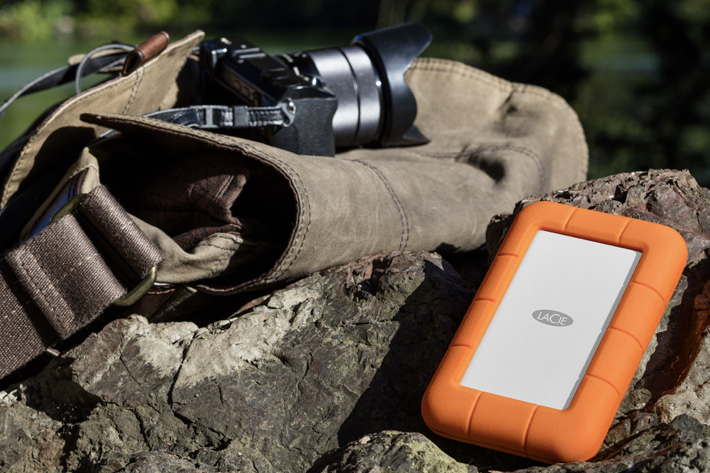 It’s in that context that the new LaCie DJI Copilot was introduced. But Seagate did not stop there, also adding to its popular LaCie line a new drive, the LaCie Rugged Secure, introduced at CES 2018. Again with design by Neil Poulton (who is the name behind recent LaCie products), the Rugged Secure is a hard drive built to withstand all-terrain extreme conditions from photo shoots in sub-zero temperatures to repeated drops on hard studio floors. This new product is the first Rugged drive to include hardware encryption using Seagate Secure technology. The drive gives creative professionals and other users peace of mind that they can control access to their content. A simple disconnection of Rugged Secure from a computer will automatically lock the drive and access to the data stored and will remain password-protected via new Toolkit software. The LaCie Rugged Secure will cost $139 for 2TB and will be shipping in the Spring. 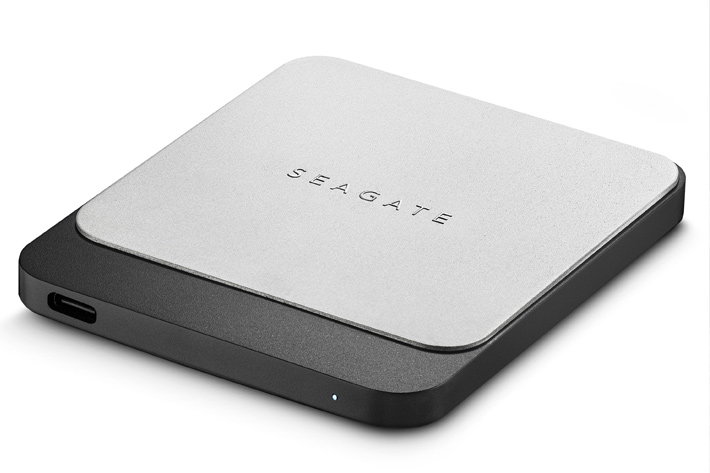 Seagate also has a new solution under its own name, an ultra-portable flash drive that teams fast performance of up to 540MB/s transfer rates, with shock-resistance and USB-C connectivity: the Seagate Fast SSD. Users can backup or sync their content using Seagate’s new Toolkit software. The Seagate Fast SSD is available in 250GB, 500GB and 1TB capacities and has a street price in the U.S. of $99, $169 and $349, respectively and will be shipping in the Spring. 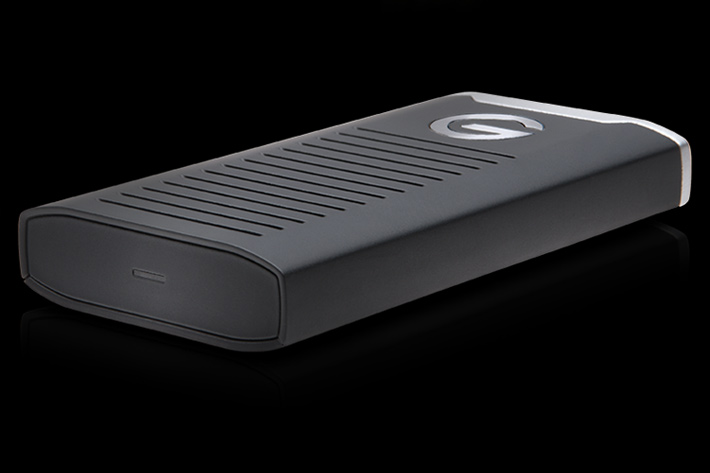 When you need a rugged storage solution, G-Technology is a name to check. The company introduced at CES 2018 a new product, the G-DRIVE Mobile SSD R-Series with a 2TB capacity, featuring a versatile USB-C port with a USB 3.1 Gen 2 interface, so the device is ready for laptops both old and new.

Featuring IP67 water-and dust-resistance, 3-meter drop protection ( tested on a carpeted concrete floor), and a 1000lb crushproof rating, the G-DRIVE mobile SSD R-Series provides rugged storage you can trust, says the company. Sitting among the fastest external SSDs available using USB 3.1, the drive offers transfer speeds up to 560MB/s, so you can quickly edit and save large video and photo source files.

Available in capacities up to 2TB, the G-DRIVE mobile SSD R-Series provides light, pocket-sized storage to keep your 4K footage, RAW photos, and media libraries to edit and save, wherever, whenever. The G-Technology 2TB G-DRIVE R-Series USB 3.1 Type-C mobile SSD costs $749. 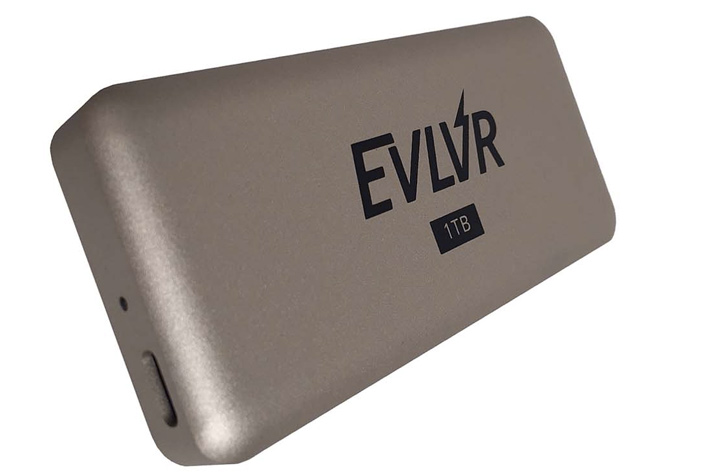 Speed is the key element of the new SSD solution from Patriot. The EVLVR Thunderbolt 3 Portable SSD outpaces the speeds of traditional external SSDs by three-fold. With outstanding speed delivered by the Phison E8 PCIe controller and Thunderbolt 3 connectivity, the EVLVR – which is an abbreviation for “evolver” -, can reach up to 1500MB/s in sequential read and up to 1000MB/s in sequential write speeds. On top of being extremely fast, the EVLVR is also power efficient and does not require any external power supply.  Thunderbolt 3 brings Thunderbolt to USB-C at speeds up to 40 Gb/s, creating one compact port that does it all.  With Thunderbolt 3 a single cable now revolutionizes connection technology – simultaneously supporting high-resolution displays and high-performance data devices while also supplying power.

According to Les Henry, Vice President of Engineering at Patriot, “We are pleased to add the Patriot EVLVR Portable SSD to our SSD line, and our team is especially proud of implementing Thunderbolt 3 which allows Patriot to build high-speed and high-quality portable storage solutions.”

“We are happy to be able to collaborate with Patriot in bringing a high-performance and power efficient external SSD experience to the Thunderbolt™ 3 eco-system,” said KS Pua, Chairman and CEO of Phison. “We believe the Thunderbolt 3 device market will experience a healthy growth in the coming years.” 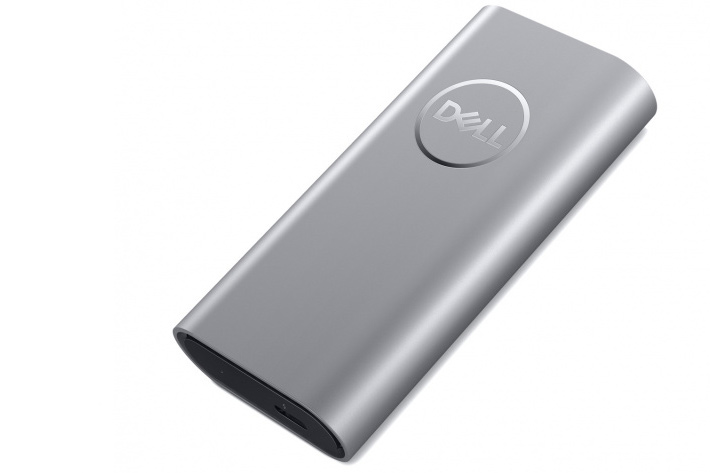 Announced at CES 2018 as the world’s most compact storage device, the Dell Portable Thunderbolt 3 SSD measures just 98.8 x 48 x 19 mm (dimensions similar to a flash drive), and is available in 500GB and 1TB.

Both drives share the same technologies and Thunderbolt 3, meaning users can expect, according to Dell, data transfers speeds up to 2650MB/second, due to the fact that the drive uses USB-C ports to transfer data. According to Dell, the new product uses exactly the same type of SSD technology as Dell’s PC systems. 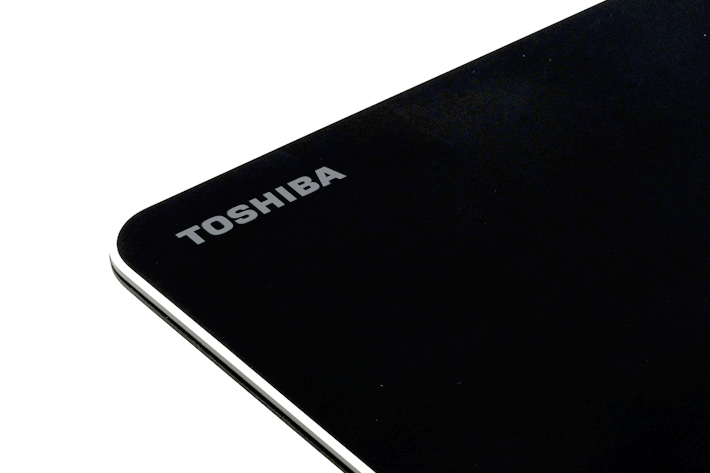 Surprisingly, Toshiba went to CES 2018 with its first portable SSD drive. The Toshiba XS700 is nothing revolutionary, though, a first step into this world, maybe preparing the future. The drive, which is only available in a 240GB capacity, uses a USB 3.1 Gen 2 connection with a Type-C connector and will ship with a Type-A adapter.

Based on Toshiba’ 64 Layer BiCS 3D TLC NAND flash memory, the drive was announced at CES 2018 without any indication of price, as Toshiba will wait for the expected change – probably down – in prices now that NAND is a common solution among manufacturers. The Toshiba XS700, which will come with a 3-year warranty, will be competitively priced, according to the company. 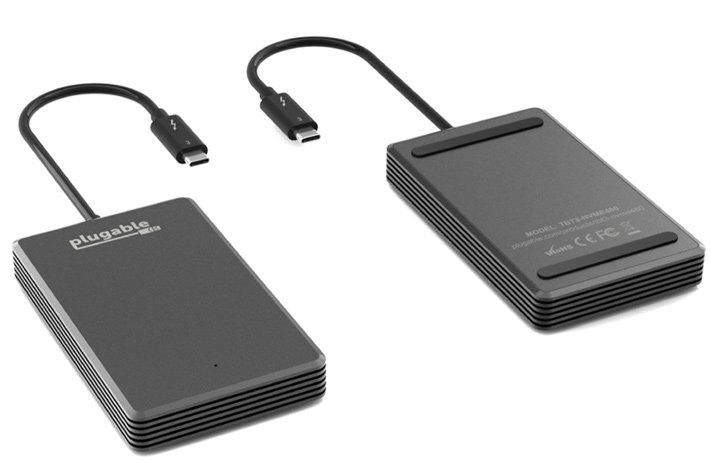 Portable drives are getting fast and the new Plugable is another example. The drive, which is compatible with all Thunderbolt 3-enabled PCs and laptops, including the new Apple MacBook Pro, makes use of the bandwidth provided by Thunderbolt 3 to offer speeds much higher than those achieved by USB 3.1 Gen 2, which is limited to 10 Gbps. And because it is powered by Thunderbolt 3, one USB-C cable is all that is needed – no external power adapter is required.

Connect the drive to a Thunderbolt 3 port to gain 480GB of extra storage with amazing speeds of up to 2400+ MB/sec read and 1200+ MB/sec write, all without the need for an external power connection. These speeds make this external drive a no-compromise performance solution for video editing, backup, and any tasks which demand maximum disk performance.

The Plugable 480GB Thunderbolt 3 drive is expected in Q1 2018. No price announced, yet. 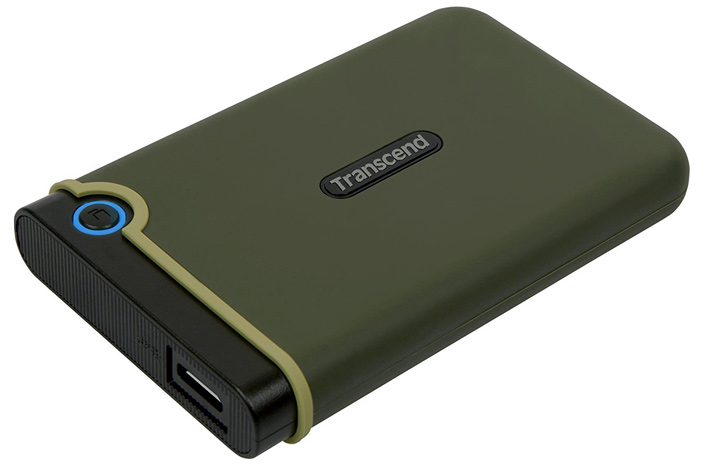 Introduced to the market in 2017, the Transcend StoreJet 25M3 continues to be a viable solution if you need a portable  hard disk drive that offers the highest level of anti-shock protection. Offering military-grade shock resistance as an option, that’s to say it is based on U.S. military drop-test standards, the StoreJet 25M3 features an advanced three-stage shock protection system and is protected by a durable anti-shock rubber outer case. 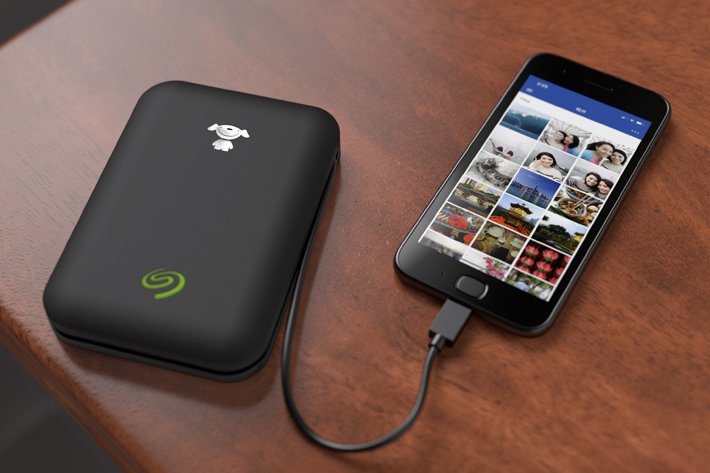 The Seagate Joy Drive is a different product, but because it aims to fill, to a certain extent, the same goals as the portable SSD drives, is included here. Designed for consumers facing the challenge of space and power while mobile, the new Joy Drive is simultaneously a portable power bank and external storage solution for Android smartphones that enables users to enjoy movies and other media while also extending their device’s battery life—anywhere, anytime.

For consumers in China and Indonesia – two countries with some of the highest concentrations of smartphones on the planet – owners of Android mobile devices can significantly extend the battery life and capacity of their smartphone or tablet, while dispensing the need for a WiFi connection or cellular service. Available first in China this March through an exclusive partnership with JingDong, one of China’s largest online retailers, the Seagate Joy Drive is available in 1000GB (1TB) capacity and has a street price in China of 660 CNY ($99).

Seagate says the company is also evaluating potential future markets and partners for this product. Due to the small size, similar to a smartphone, and the storage/powerbank function, along with the option to use it with a tablet, the Joy Drive seems as an interesting product for more than the casual user.