As one who has to often format Mac OS drives I’ve always wondered about what the difference in speed might be between these various formats.

I have often wondered if the different SSD drives formats really make a difference in speed. Since I’m a Mac user working in post-production I do a lot of file transfers and since external SSD drives have become quite affordable, are fast and easy to ship they have become a medium of choice when it comes to moving files around when an internet transfer isn’t feasible. Often I’ll work in entire job off of an external SSD if I have to move it between systems at my home or office or a client facility.

This isn’t the first time I’ve thought about hard drives, drive speeds and SSDs in general.

When you buy a new external SSD and plug it into your Mac it usually mounts right up. But looking at it in the Disk Utility shows the formatting as ExFAT. That’s a somewhat universal format that is compatible between Macs and PCs and allows for the transfer of file larger that 4GB?? which is important. There used to be only a few options for disk formats but if you’re working on Mac OS 10.13 or later there’s an additional one called APFS.

This article isn’t meant to be an educational primer on the differences in these formats (you can find that here and here) but rather just a comparison on file transfer times between some of them. I was doing this for my own research so why not post the results?

I picked up a couple of the venerable SanDisk Extreme Portable SSDs during Amazon Prime Day this year.

These SSDs are USB 3.2 Gen-2 (ahh yes the USB standard is so confusing) so they should be capable of 10Gb/s when plugged into a USB-C/Thunderbolt port. See it says so right in the tiny print on the box. 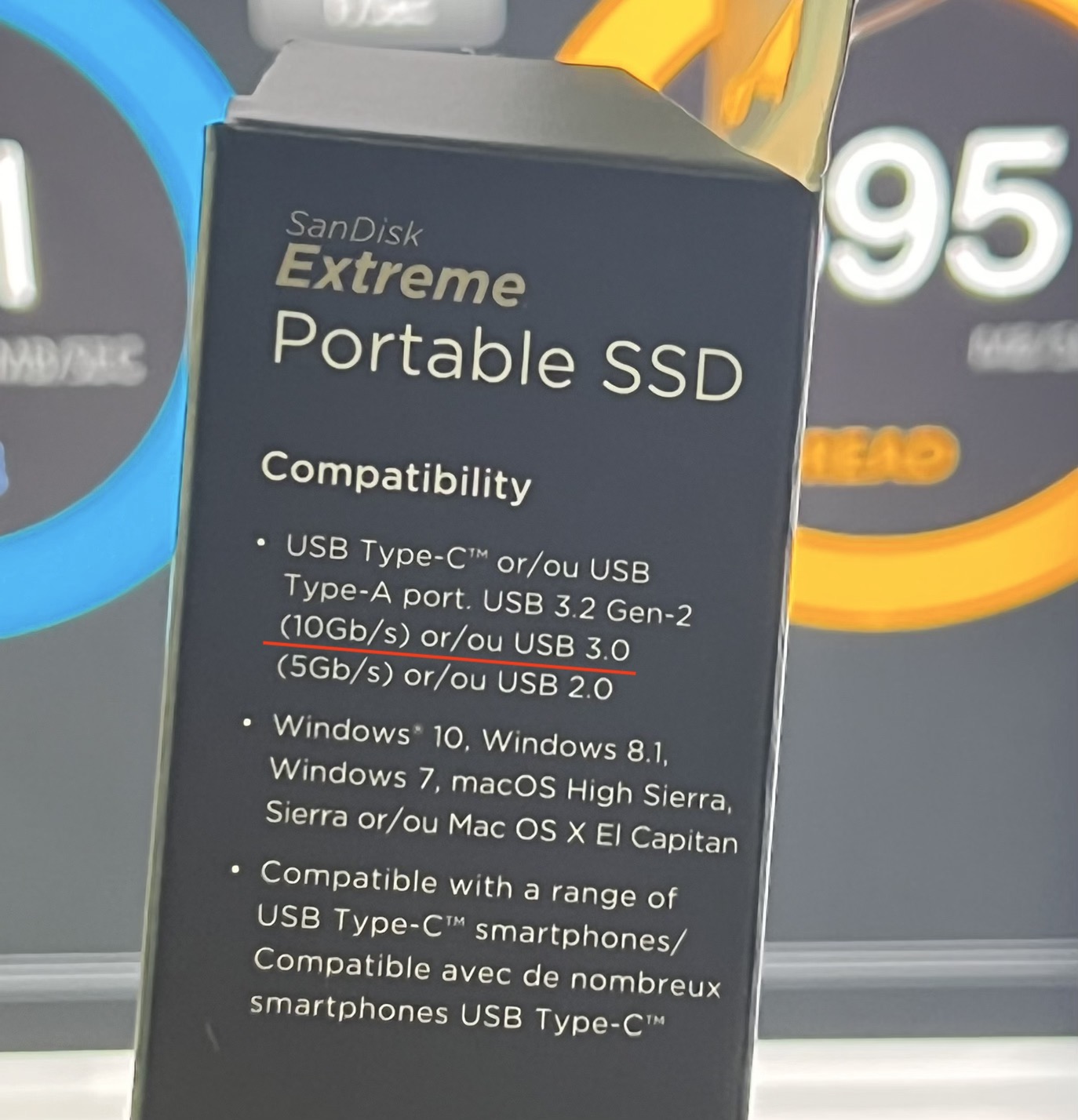 Apparently there is now a new version of this very drive which is the USB-C 3.2 Gen 2×2 (20Gbps) spec which is double the speed of this Gen-2 without the x2. Kingston Technology has a good article on this that surfaces early in a Google search as Kingston apparently cares more about educating customers than the behemoth that has become Western Digital (that owns the SanDisk brand). And this is a good comparison between these two exact generations of SanDisk Extreme Portable SSDs. These specific SanDisk SSDs have really come down in price so my guess is it’s the older Gen 2 versions moving out of the market vs the newer and faster Gen 2×2.

Anyhoo… back to the task at hand.

When I plug it into my iMac Pro straight out of the box it is formatted as ExFAT. 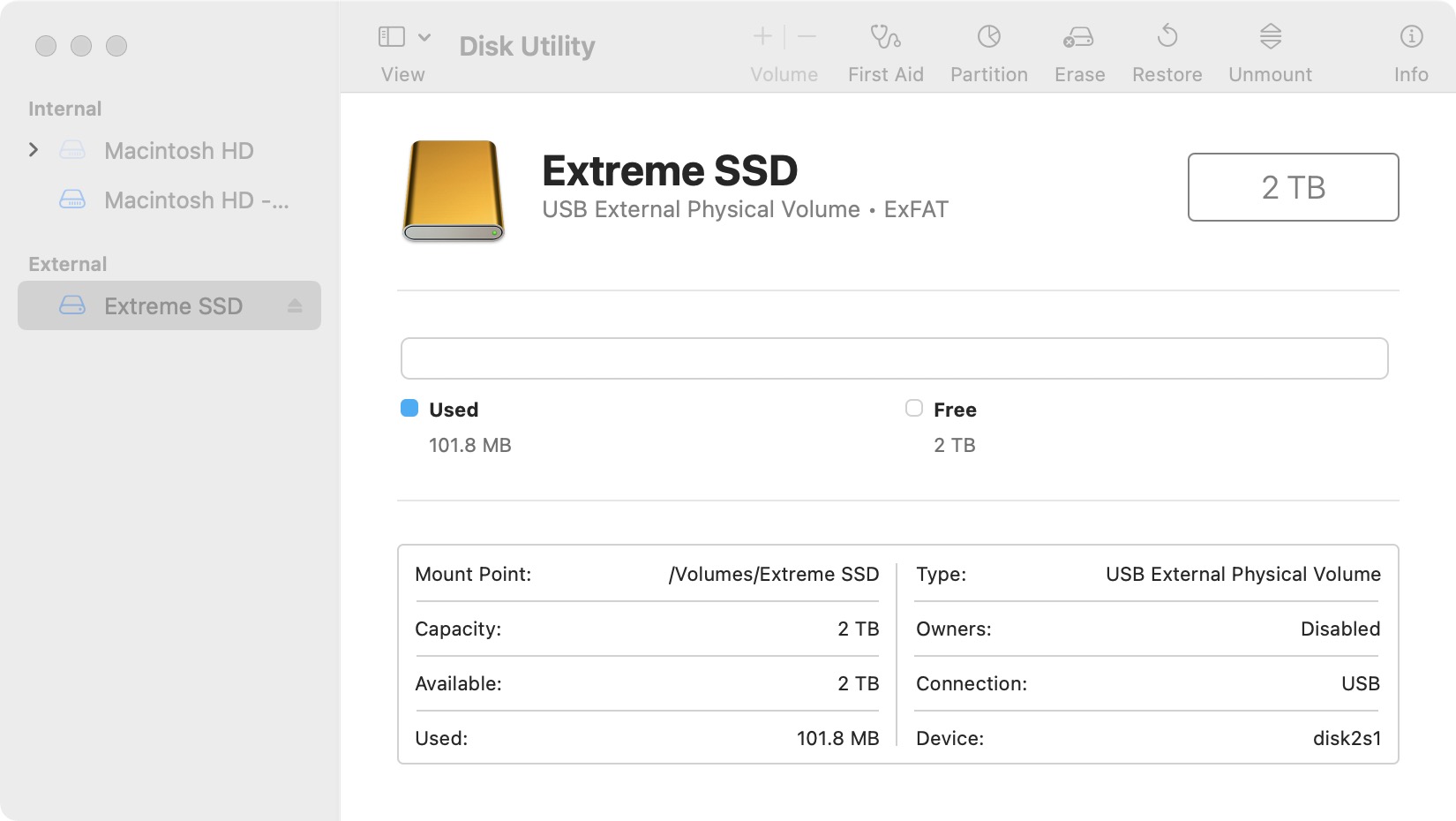 For testing the speed I’ll use the AJA System Test as it’s easy to setup and lets me dial in a specific resolution and codec type. For these tests I’ll leave it set at an UltraHD resolution, a 4 GB file size with the codec set at ProRes as that’s a very common video file type that I create, copy and transfer.

And because I like to time things with a stopwatch I’m copying a 30 GB folder full of video files to the empty drive using my favorite all around Mac app Path Finder.

That’s pretty respectable overall for ExFAT as I always expect it to be slow but it really isn’t. In fact, often you might be sent an SSD that is formatted ExFAT since that’s often the default and many people don’t bother to reformat then as they might have to maintain compatibility between Macs and PCs. And they might not know what I’m talking about. 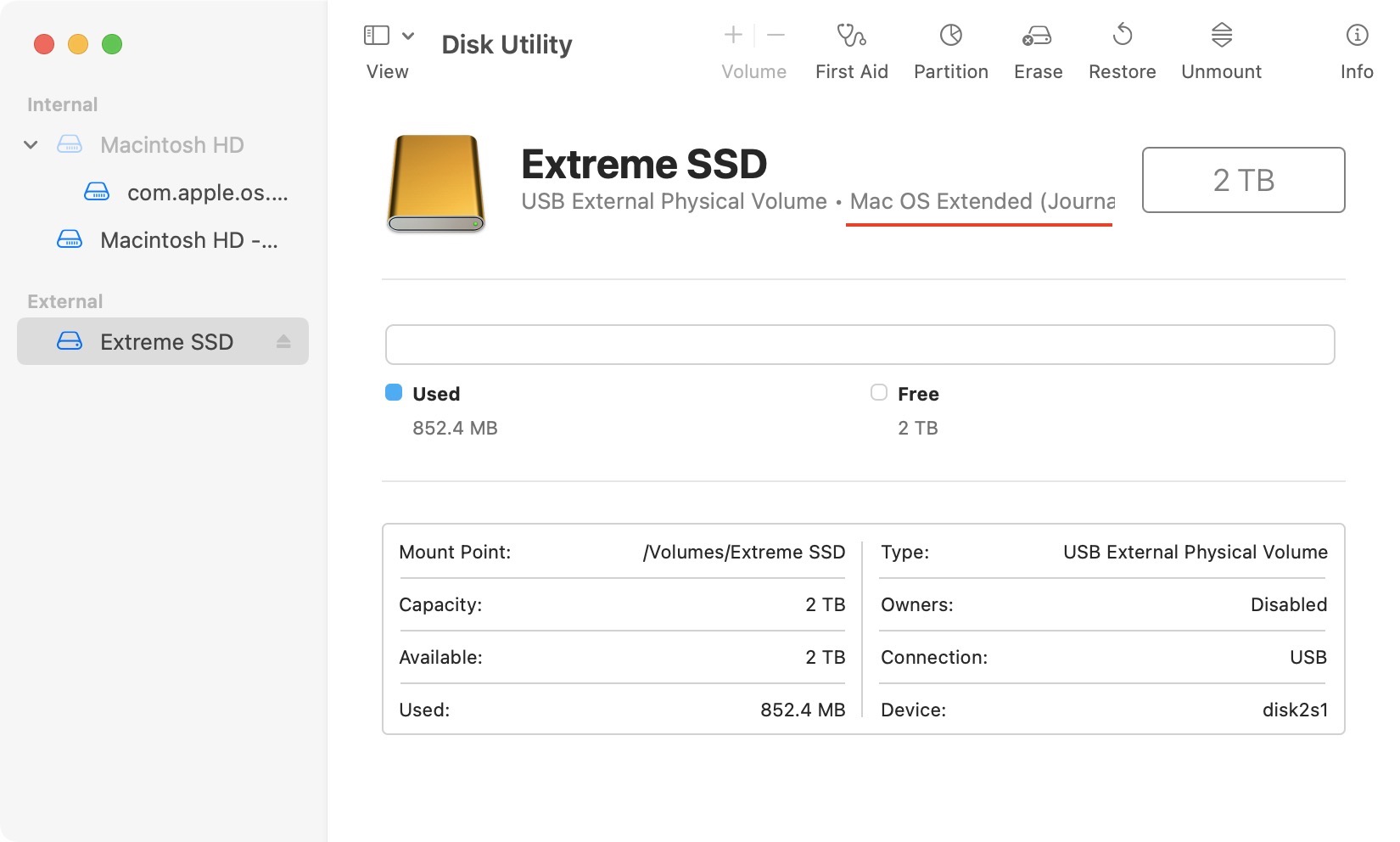 The whole purpose of this exercise is that I was wonder if there was any speed difference between the formats on an external SSD. Of course, Quora has an answer for that, but I wanted to see for myself. So back to the AJA System Test.

I guess a little bit of speed is better than nothing.

Yea that’s not much difference either.

One advantage of the APFS format that I’ve read about is it was designed more for modern SSDs and since we’re using SSDs now for a lot of post-production work and transfers seems a modern file system is a plus. The biggest disadvantage is probably compatibility so always check your workflow and partners before standardizing on any new file system as older Macs might not be compatible. There’s nothing more frustrating than shipping a hard drive only to find out the recipient can’t mount the thing. This is a great article from TechRepubic that has some specific pros and cons of both the systems.

Is it any faster?

That’s a little faster on the read but not on the write. What I’ve found over the years doing disk speed tests with these video focused utilities is that there is never a hard and fast time that is super reliable every single time.

Those file transfer times are identical. Would it make a difference if I was transferring nearly 1.5 TBs?

And what about when you have to use that little USB-A adapter?

All the SanDisk Extreme Portable SSDs come with a little USB-A adapter for those times when you just can’t get a USB-C connection of you feel like you want to try to plug in a device more than once without getting it right.

You know you do that every single time don’t you? It is nice to have such an adapter in the box for when you’re in a bind. 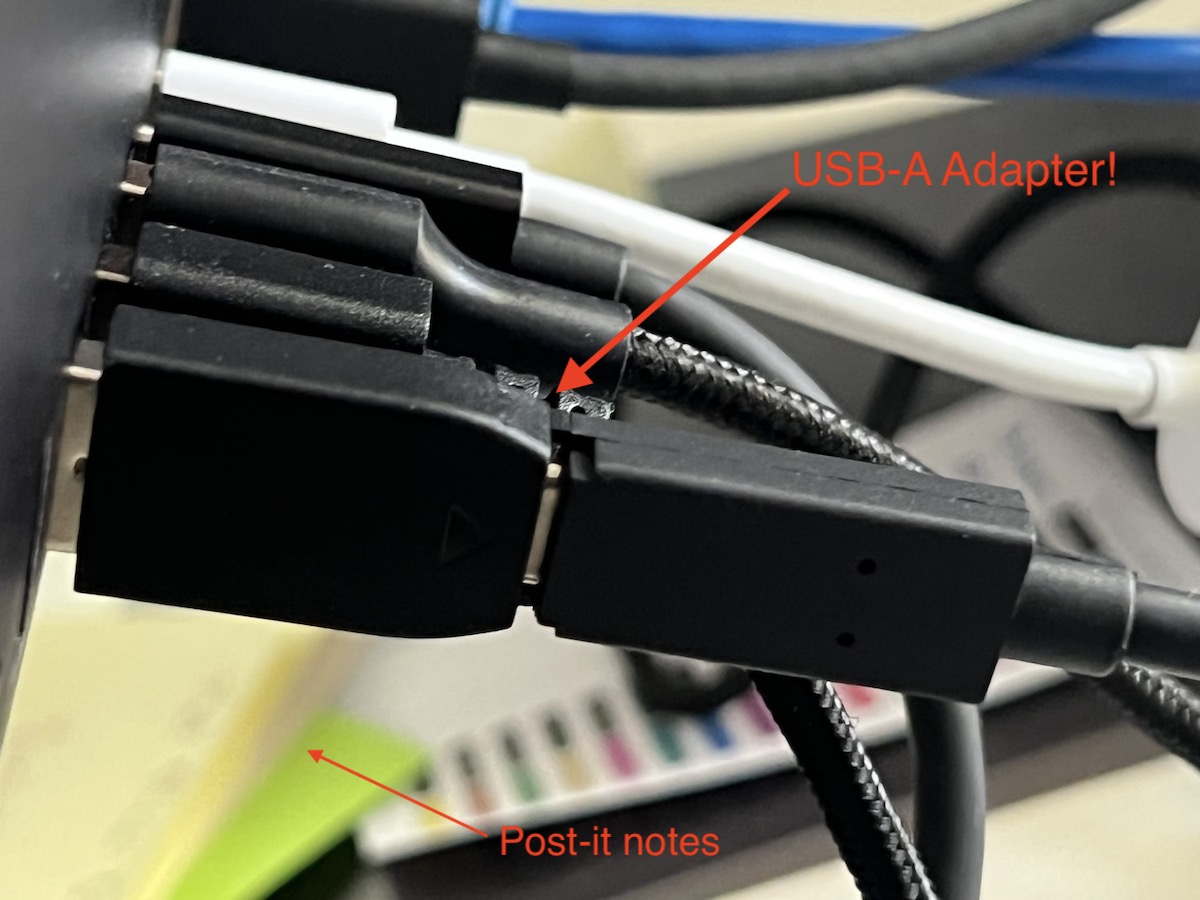 How much does using this old technology bottleneck a transfer?

And how long was that other transfer I was testing?

30 GB file transfer to APFS with the USB-A connection: 12 minutes.

Ok, that’s enough of that.

I decided to try that big transfer too since I could and I would probably never try such a thing again since watching files transfer is one of the most boring things you can do. I thought this would be a good place to see if there was a difference in the transfer times of ExFAT and APFS. Honestly I don’t expect there to be.

For this transfer I wanted to rely on good old Hedge to make that verified copy happen. While I often copy smaller files and batches of files with Path Finder or the Mac OS Finder, for large media file copies where I need them to be verified I use Hedge.

First I have to format back to ExFAT. Once you format a Mac drive as AFPS you have to work a bit to return a format back to something else with Disk Utility. And as a reminder when you reformat a disk it erases everything on that disk. Don’t forget that, okay?

How long did that take? A look at the Hedge log reveals just that

And then after that it was a reformat back to AFPS, making note of which partition scheme to use since this was a permanent formatting for this drive.

How long did that take?

So not a substantial gain in transfer time.

So what does all this mean as far as working with and formatting drives for post-production? Nothing revolutionary I don’t think. Did I waste entirely too much time going down this rathole when all I wanted to know was if there was really any speed difference between drives formatted differently? I do think so.

More than anything it just answers some questions that I wanted to see for myself. It makes me glad to know that when I get an ExFAT drive handed to me that I’m not giving up a whole lot when it comes to speed since it’s usually something I cannot change.

But it also gave me some good knowledge about these different formatting options and exactly what AFPS is all about.

I hope reformatting this brand new SSD over and over a few times didn’t shorten it’s life.