SSD drives have really come down in price over the years. Their size and speed make them excellent post-production companions

Speed and size is good.

Hard drives are a necessary part of video editing. I put hard drives in italics as I mean that term to encompass everything from cheapo USB drives to fast and small SSDs to expensive fast and big RAIDs. If you’re doing a lot of video editing I am a big proponent of a big, fast RAID as your primary media drive. I’ve written a number of articles over the years about RAIDs and there really is no replacement for the video editor.

A Tale of Two Thunderbolt Drives

There is actually more to know about media drives for editing than RAIDs.

My lord a lot of drives in and around over the last week. Transferring and transcoding. Then editing.

Drives with spinning platters are still probably the norm and not the exception though scenes like that one above are becoming rarer and rarer.

I’ve come to amass quite the collection of small, fast SSDs for a lot of on-the-go video editing jobs. There was a time when SSDs were prohibitively expensive so we often used small, spinning drives as they were cheap but they weren’t very fast.

SSD prices began to come down significantly and small, fast, portable SSDs became quite normal. Sometimes they come from a client and they are passed off for a quick cut then handed back over. Sometimes they are jobs that have to be edited on-the-go or perhaps shuttled between home and office. They often make for tiny digital backpacks that can be used to store assets for many different jobs on one drive so that makes them a great alternative to Dropbox, Google Drive or any other cloud file service that you don’t want syncing to your internal drive. I have one dedicated mainly to one client and Final Cut Pro X Libraries that I move between home and office.

Here at PVC we are all fans of SSDs. In fact, media drives are so important to media production and post-production, in general, we’ve had roundtable discussions and Q and As about them in various forms. I even tried to visualize drive speed years ago so editors could understand what a slow drive really is. For awhile I was keeping a running list of random hard drive speed tests.

Solid State Drives have dropped dramatically in price over the years. When they first came to post-production on a regular basis they popped up as recording media for RED cameras and in AJA Ki Pros. At least that is where I started seeing them. I remember replacing the system drive in my old Mac Pro tower with an SSD and the boot times improved dramatically.

It wasn’t until Samsung started putting SSDs into external USB-3 enclosures that I found these drives to be that sweet spot between price and performance. I didn’t know that Samsung was introducing a new version of their T – series, taking it to T7, until I saw a news piece here on PVC about it in May of 2020. At first, all I could find was the fingerprint version but once the regular T7s got in stock, I ordered one. 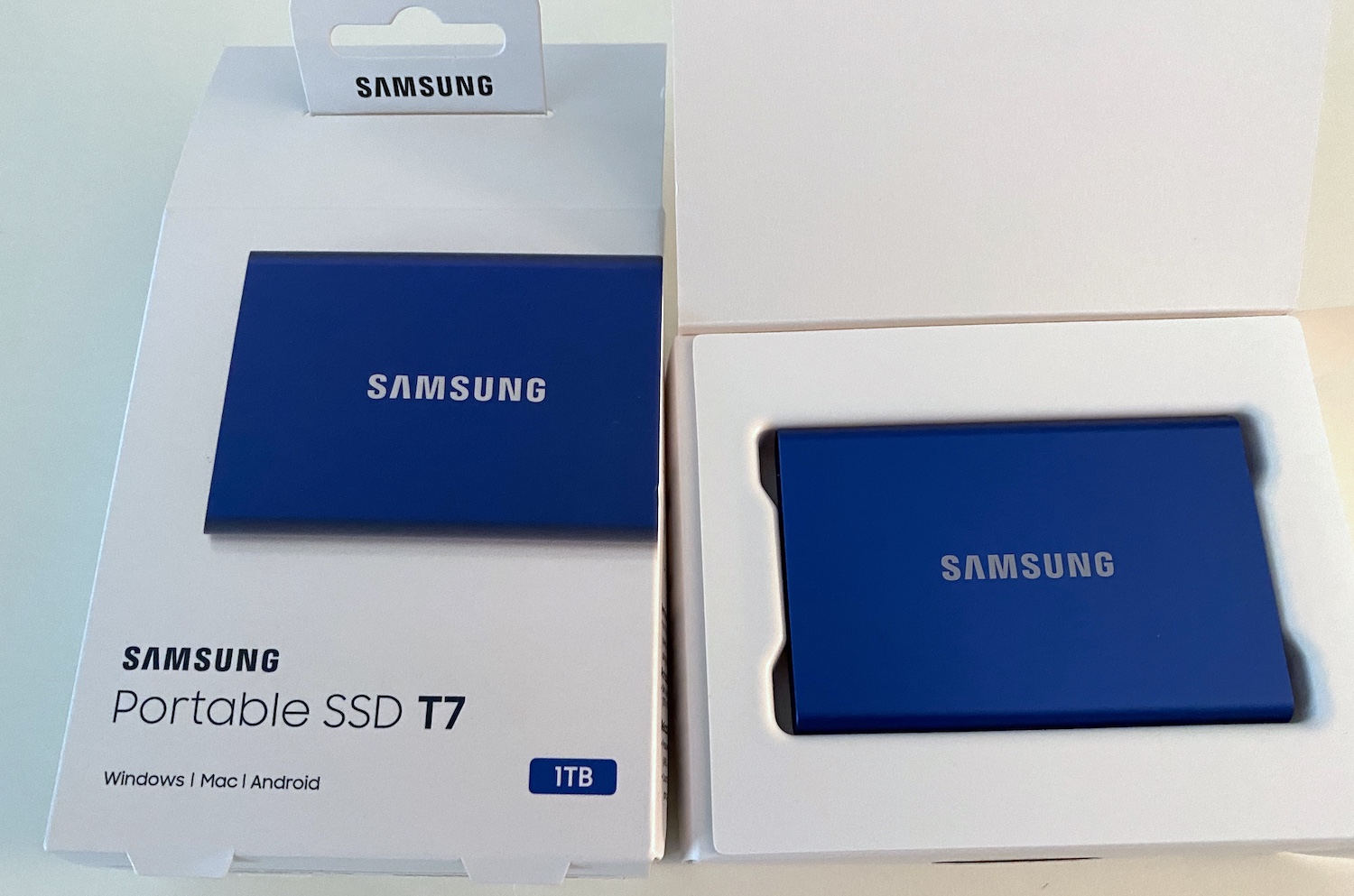 Before we speed test this thing, let us look at the evolution of Samsung external SSDs. 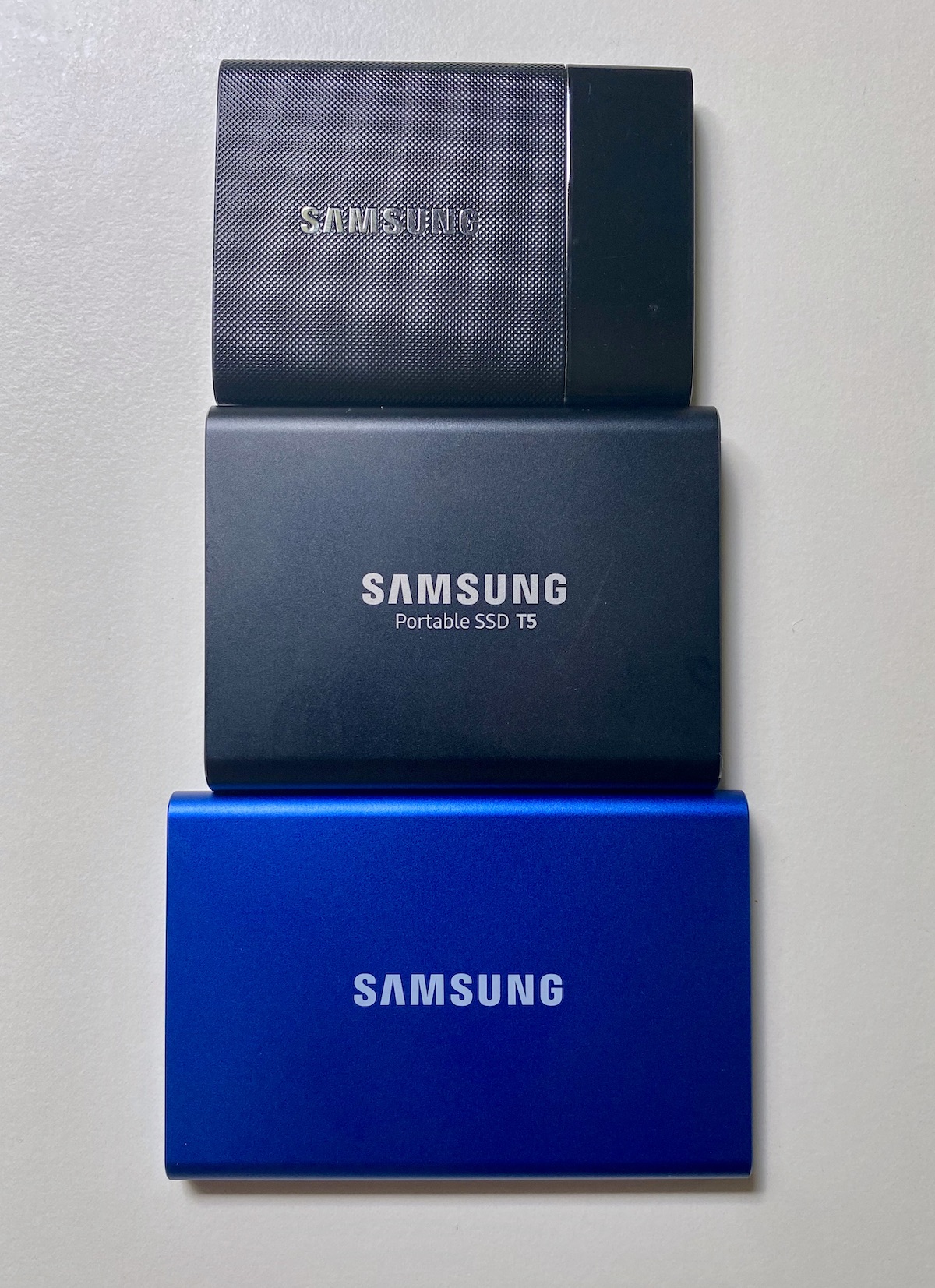 They’ve remained small and lean with new T7 being a big wider but also thinner than the previous generation.

This little thing has had a lot of read and writes cycles over the years. I’m shocked it still works.

This little guy is an old one. At 500 GB it was small. It’s USB3 and has media on it and is years old so take this speed above with a grain of salt.

The T5 was the first I had with a USB-C connection. It was fast enough for a lot of different jobs. While not the best for a lot of full-resolution multicam editing you could edit ProRes all day and stuff tons of proxy edits on it.

When connected via USB 3 you were limited to USB 3 speeds.

Jumping to a USB-C connection gets a nice jump in speed.

I like the color choices that have been added to the new T7 line. It’s not just black anymore.

Hooking the fast T7 up via USB 3 limits its speed. Don’t do that if it can be avoided.

When I read we could expect a speed bump out of the T7 is all the more reason to order and I did just that! This is a nice speed boost from the T5 and at $170 for the 1 TB T7 it’s going to be a good drive for post-production. The 2 TB is currently $330 at our sister site Filmtools.

Maybe a half dozen

I may order a couple more of these things. Assign one or two per client? Sure. Make one into a dedicated cache? Why not. Be able to carry a lot of work mobile without carrying around big, heavy spinning drives? For sure. Assign one to keep often-used graphic templates, stock footage and sound effects libraries? Yes, please.

This might sound like a sponsored post but it is not. It’s just me singing the praises of some good editing and post-production stuff. If you do want to buy one please consider purchasing from our sister site Filmtools. They have the Samsung T7s and purchasing it from Filmtools helps keep PVC free and in business.

So stock up in red, blue, or black! Maybe specific with a black 2 TB model. Or a red 500 GB model that might be perfect for an NLE cache. 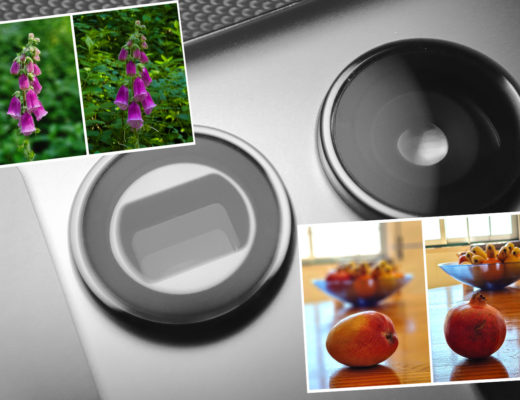