In the world of full-frame anamorphics, the Vazen is a down-right bargain

Who doesn’t love the look of an anamorphic lens? Anamorphic lenses offer interesting image characteristics and, traditionally, can be expensive—the anamorphic look, once costly to rent and even more costly to own. Well, not so fast. We are recently seeing new lens manufacturers making anamorphic lenses, one may call a “budget” lens. Vazen optics is one such lens builder. 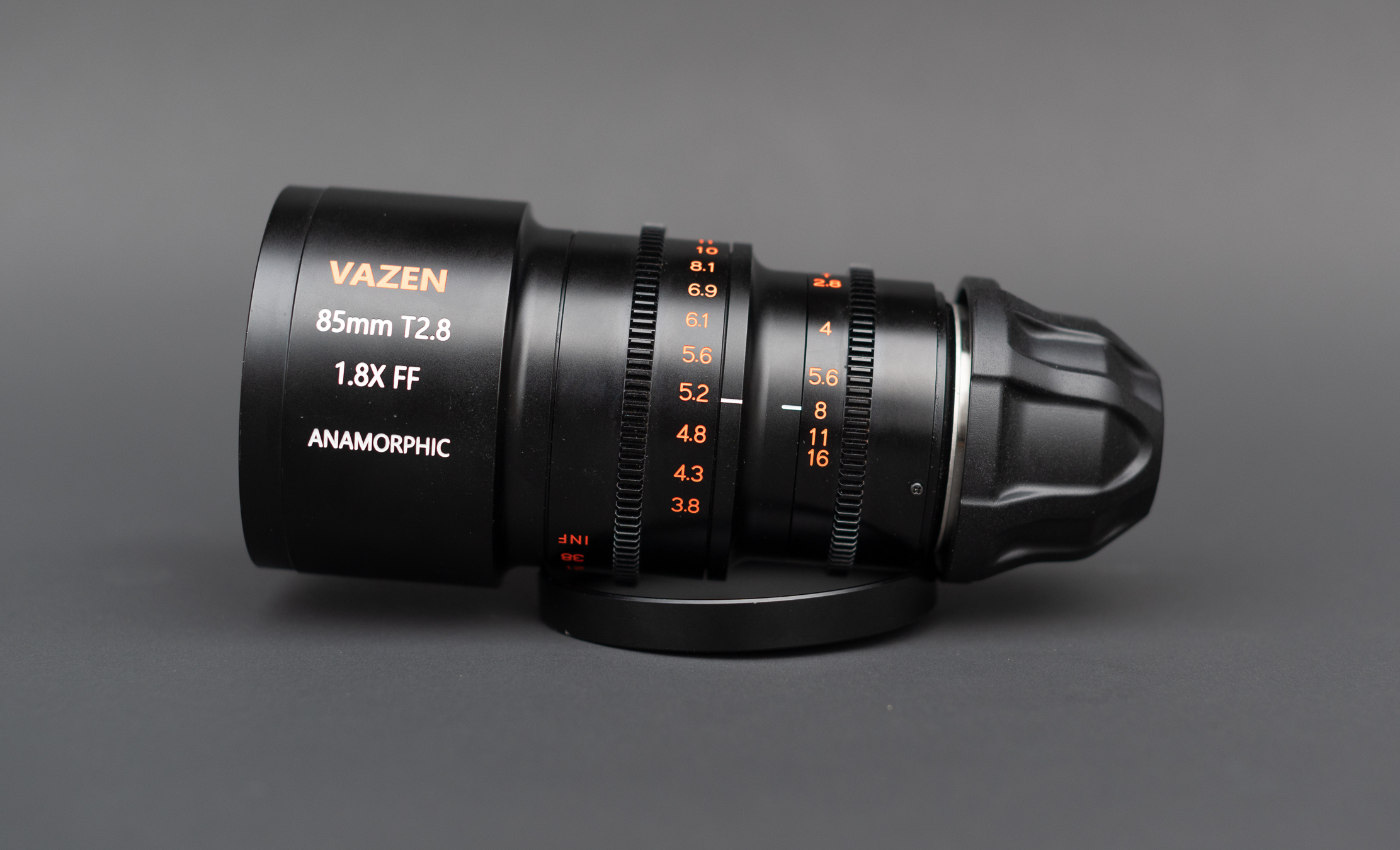 The manufacturer started with anamorphic lenses designed specifically for Micro 4/3 sensors like the one found in the Blackmagic Pocket Cinema Camera 4K, ZCam, and Panasonic GH5. As interest in Vazen lenses grew, so did the refinement of their anamorphic lens designs. The Vazen 85mm 1.8x anamorphic lens is a giant leap from Micro 4/3 to full-frame, totally skipping over S35mm, and the company’s first attempts lensing full-frame optics.

What defines a “budget” anamorphic lens? Well, price and the compromises between building a lens meeting that price. The Vazen 85mm is a good lens and exciting lens, but Vazen made a couple of concessions to fit this 1.8x lens into a market of interested buyers. Nothing I consider a deal-breaker, more like small details like lens markings missing.

The Vazen 85mm T/2.8 1.8x anamorphic lens certainly feels well built when holding the mostly metal lens in your hands. At 3.8 pounds, the Vazen 85mm is not particularly heavy for an anamorphic lens. The metal housing gives the impression Vazen built a lens capable of surviving in a rental house. The PL mount felt well made when mounting to a PL to E Mount adapter. I found the mount to be a snug fit without being too tight. 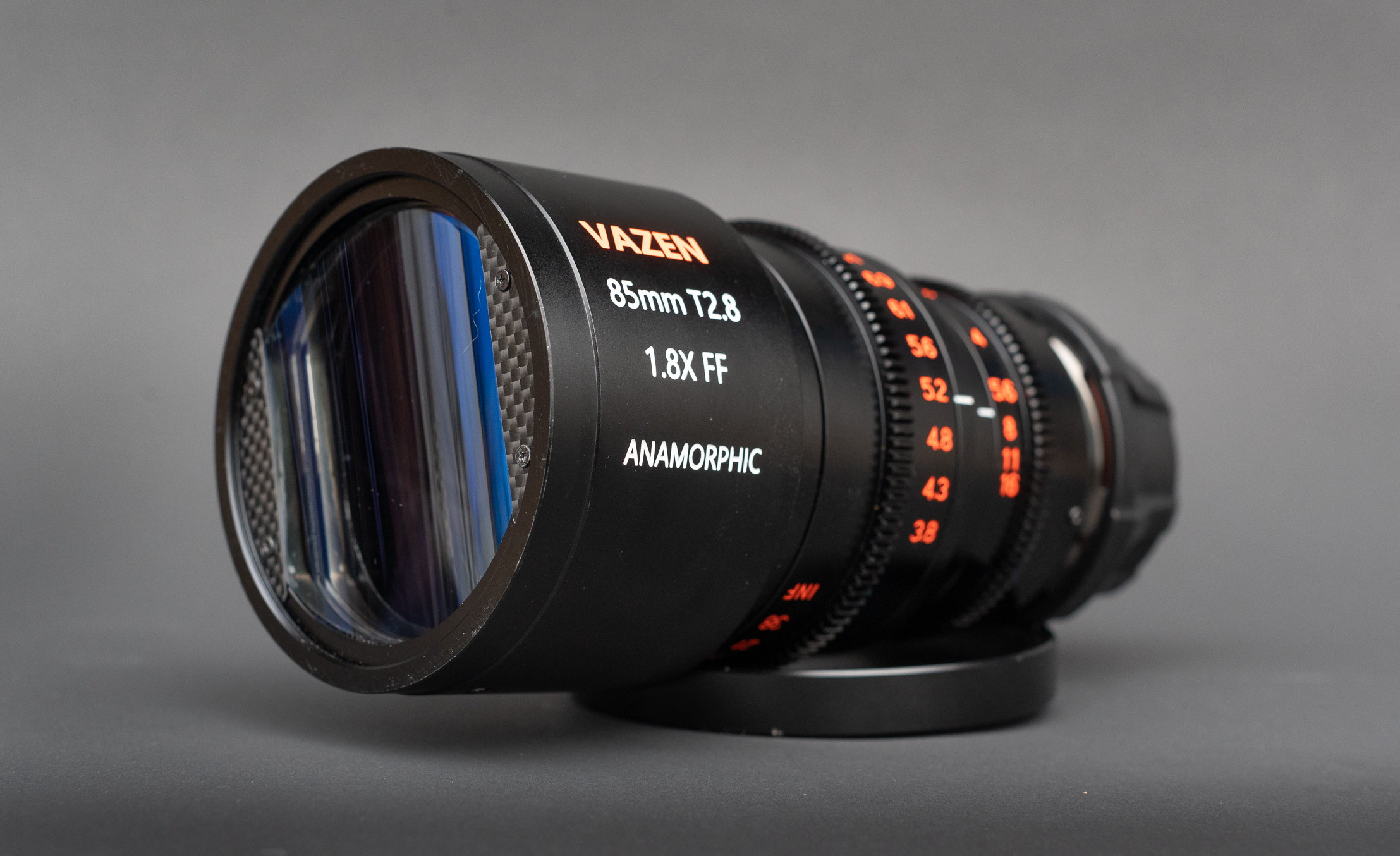 One look at the markings on the Vazen 85mm T/2.8 1.8x anamorphic lens and you will not find an exact mark. You will see the focus scale, but the barrel is missing the specific line for each measurement. While this missing detail is not a deal-breaker, I can see a focus puller becoming frustrated as she/he tries to find focus on the fly. I can also see a focus puller adding marks to the barrel with either white tape and marker or some other way. This missing hash mark is absent from the iris ring too. If I were shooting a project where I needed a detailed floor plan and lighting, then the lack of actual aperture marks makes it hard to document the exact aperture setting. Again, this lack of detail is frustrating but not the end of the world. It’s a compromise and one I see myself as okay shooting with it as long as we do not find more corners cut on the lens design. 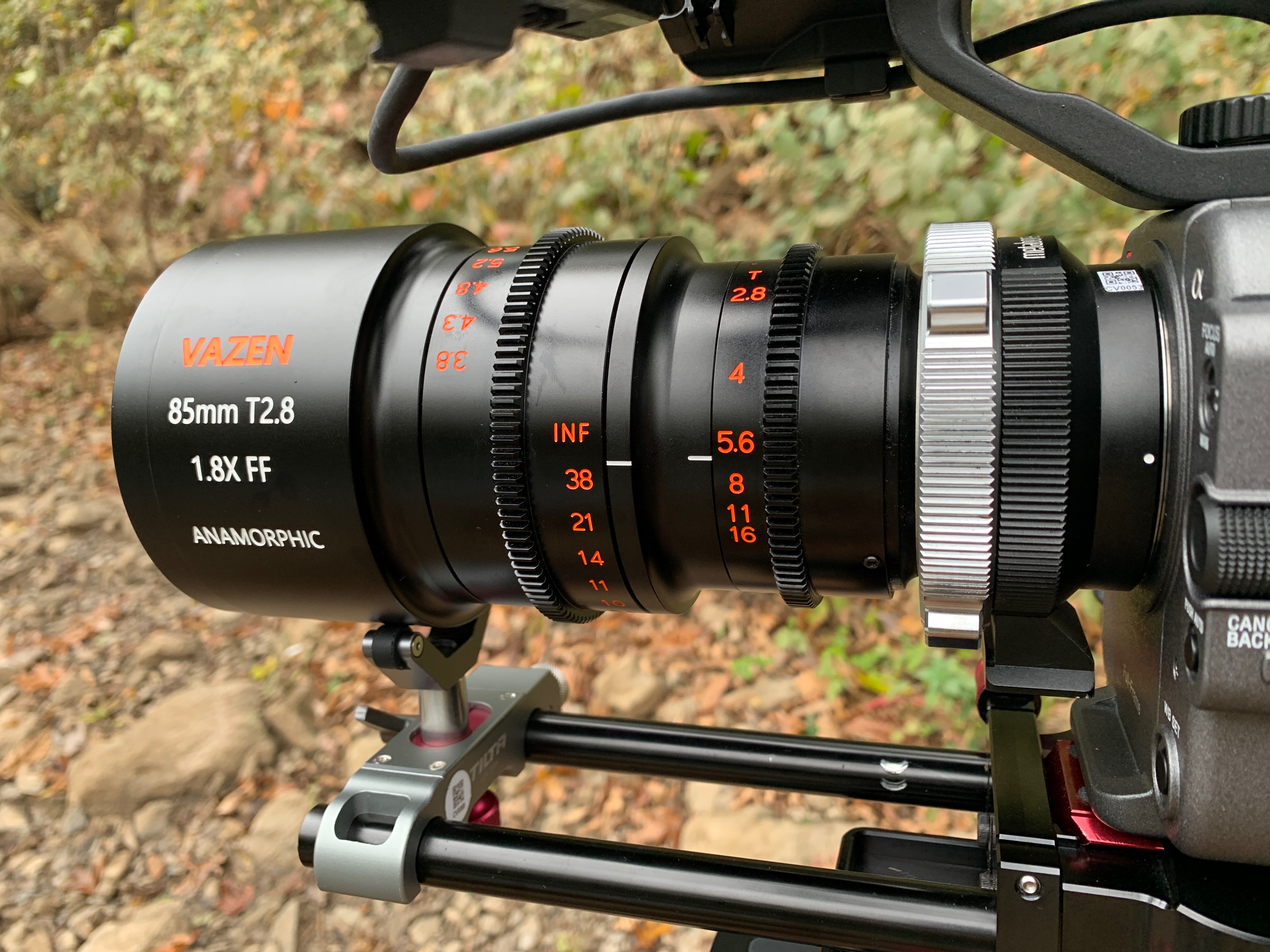 The Vazen 85mm weighs barely over three pounds, or 3.28lbs to be exact, which is pretty light for a full-frame anamorphic lens. When you look at the Vazen 85mm front, you can see the Carbon Fiber internal design, which likely helps keep the weight down. For perspective, the full-frame Cooke 85mm T/2.8 1.8x anamorphic lens weighs a touch over eleven pounds. The Cooke is also longer at 10.7 inches versus Vazen’s 6.89 inches. A Zeiss 75mm Anamorphic T/1.9 weighs in at 5.7 pounds and is less than an inch longer than the Vazen, but the Zeiss image circle does not encompass large-format sensors.

While these three lenses are different, and I hate to compare, I understand the Cooke and Zeiss lenses are built for strenuous production, and optically, I would expect a bit more refinement out of the Zeiss and Cooke.

Focus and Aperture rings moved smoothly and did not make any noise for me. For a lens that costs $8,000, regardless if that price is inexpensive for an anamorphic lens, we should expect top-notch construction. At $8,000, I expect a lens to withstand the tests of time and abusive rental clients. Internally, we need a lens tech to strip down a Vazen to see what focus stop material is used internally. For example, some budget cinema lenses use a nylon focus stop, and that nylon can wear down over time.

In front of the carbon fiber is an 86mm front filter thread for screw-on Neutral Density filters or diopters. The front of the Vazen 85mm T/2.8 1.8x anamorphic lens is a standard 95mm for mounting a matte box.

Vignetting and Fall off

There is a slight fall-off present in the wider apertures on the Vazen 85mm Anamorphic lens. I did not have time to shoot a blank wall or chart to show the fall off, but you can see it in some of the videos. It is slight and, I’d say, one of the characteristics of an anamorphic lens. Hardly noticeable unless looking at a blank wall. I actually think the slight fall off adds a little three-dimensionality to the image. I quite liked it. Vignette? I didn’t see any. The Vazen 85mm covered the Sony FX6 full-frame sensor completely. 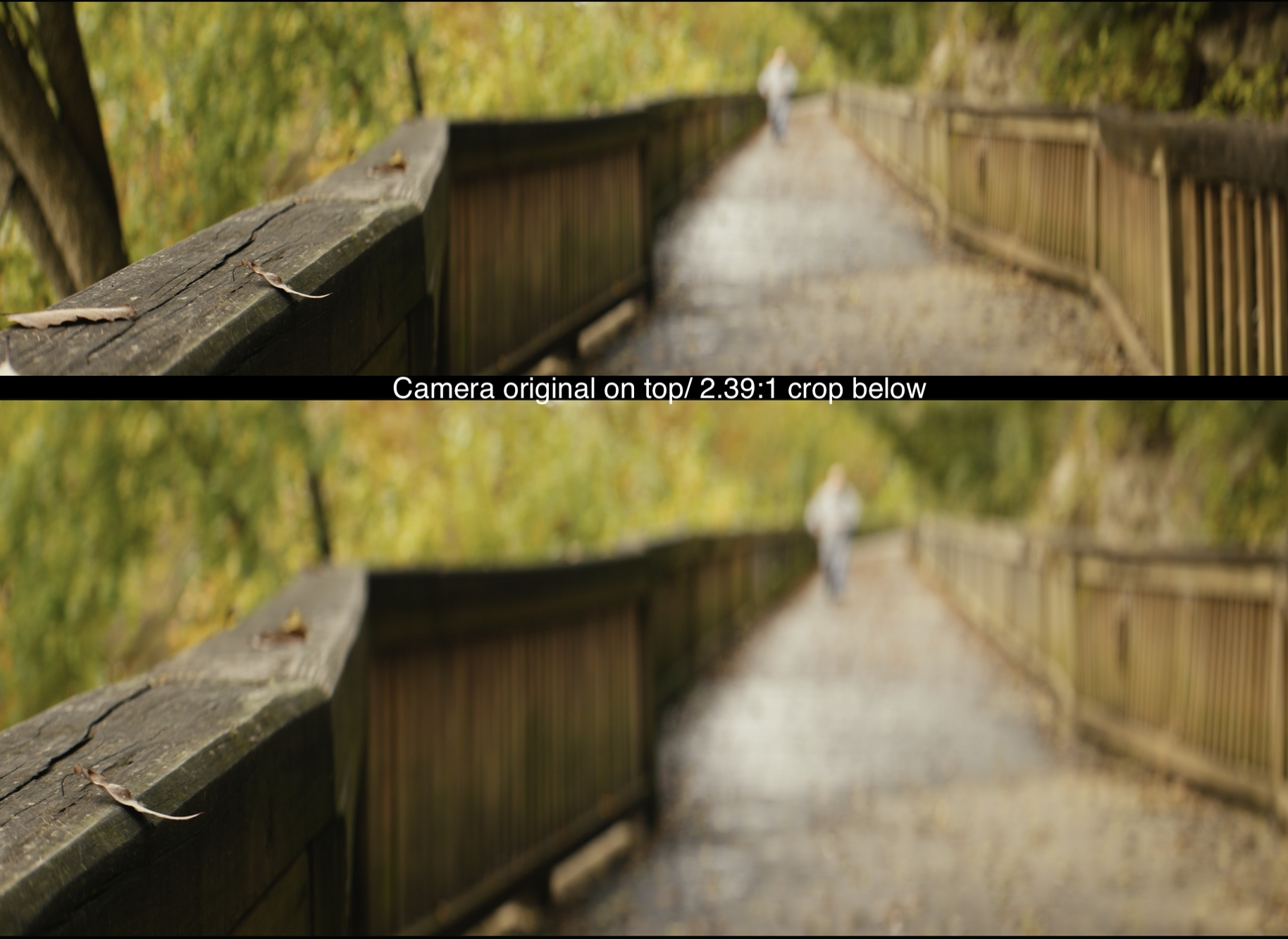 When shooting outside under cloudy skies, It was overcast the whole time I had this lens for review; the color felt natural from the lens. I did not experience any unwanted flare when shooting outside without a matte box on the Vazen 85mm anamorphic lens. When a light source is in the frame and pointing in the direction of the lens, well, that is a whole other story.

I’m here for the blue flare, all of it. I shot some video as I unloaded gear from my car to illustrate how the Vazen 85mm anamorphic lens flares. Not the sexiest of footage, but I had to mail the lens back early the next morning, and I want you to see what kind of flare the Vazen can create.

As you can see, when my blue headlamp points at the camera and lens, the flare is pretty aggressive. When I shoot a bit of the street lamps and the neighborhood, I find the flare to be interesting if a little strong. There is definitely a look to the flare, and if used smartly, it can add to a story’s visuals.

As much as I enjoyed shooting with the Vazen 85mm Anamorphic lens on the brand new Sony FX6, I think the 16:9 sensor makes for a little too wide of an image. I mean, the FX6 Vazen 85mm combo is WIDE. I tend to prefer a 1.33x anamorphic squeeze for 16:9 sensors. In the case of the Sony FX6, to get the 85mm Vazen image into a more standard 2.39:1 aspect ratio, you will need to crop the left and right of the picture. Suddenly, that 4K Sony FX6 image becomes 3K anamorphic. Not a deal-breaking by any stretch of the imagination but something to consider. 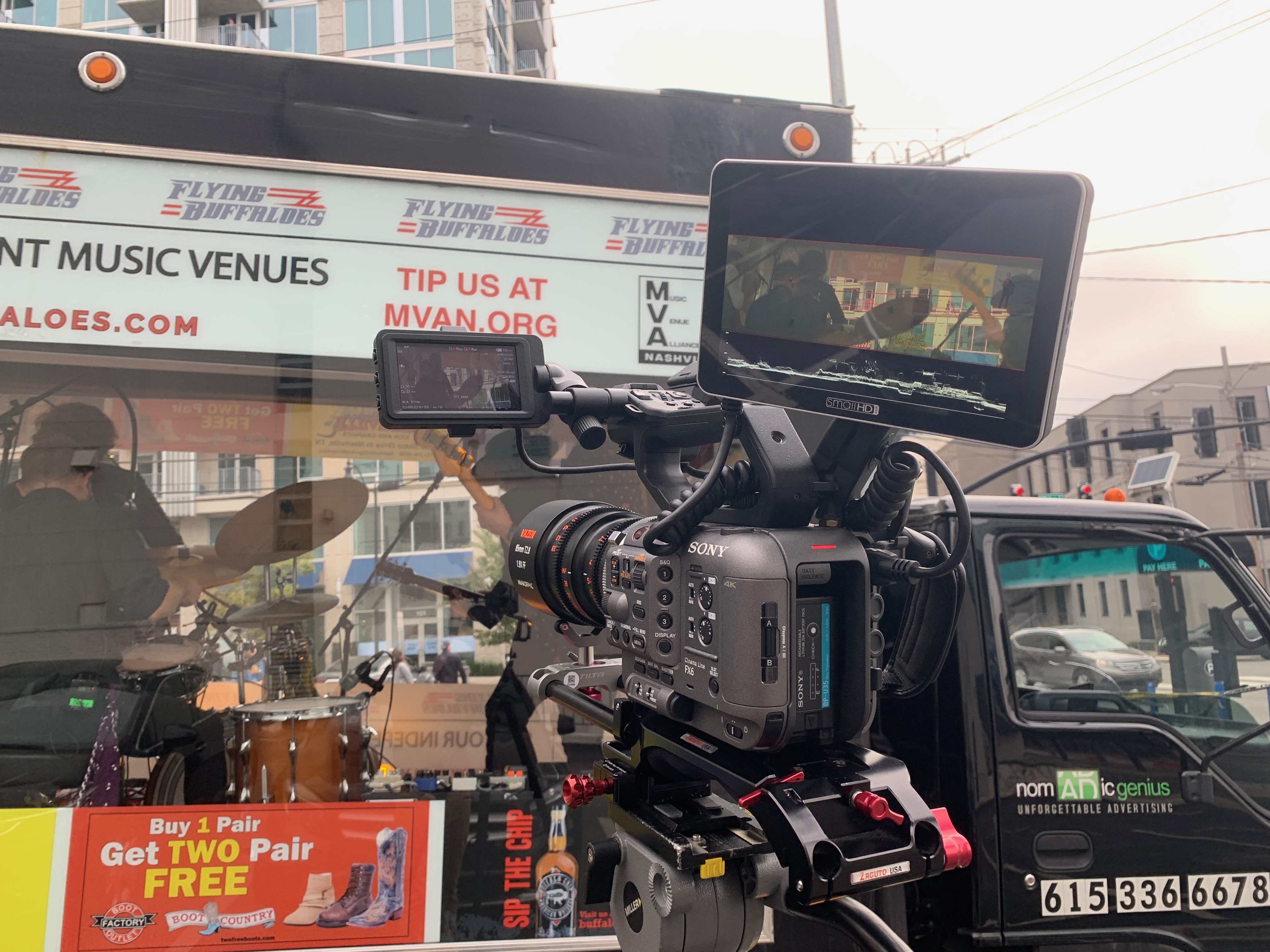 Where the Vazen fails, only the 85mm is currently available. At the time of testing and writing this review, no other full-frame Vazen anamorphic lenses are options for cinematographers to grab. Users need more than one focal length. In fact, they might want a handful of focal lengths. This ramp-up of other full-frame lenses by Vazen might take a little longer than shooters wish to wait. 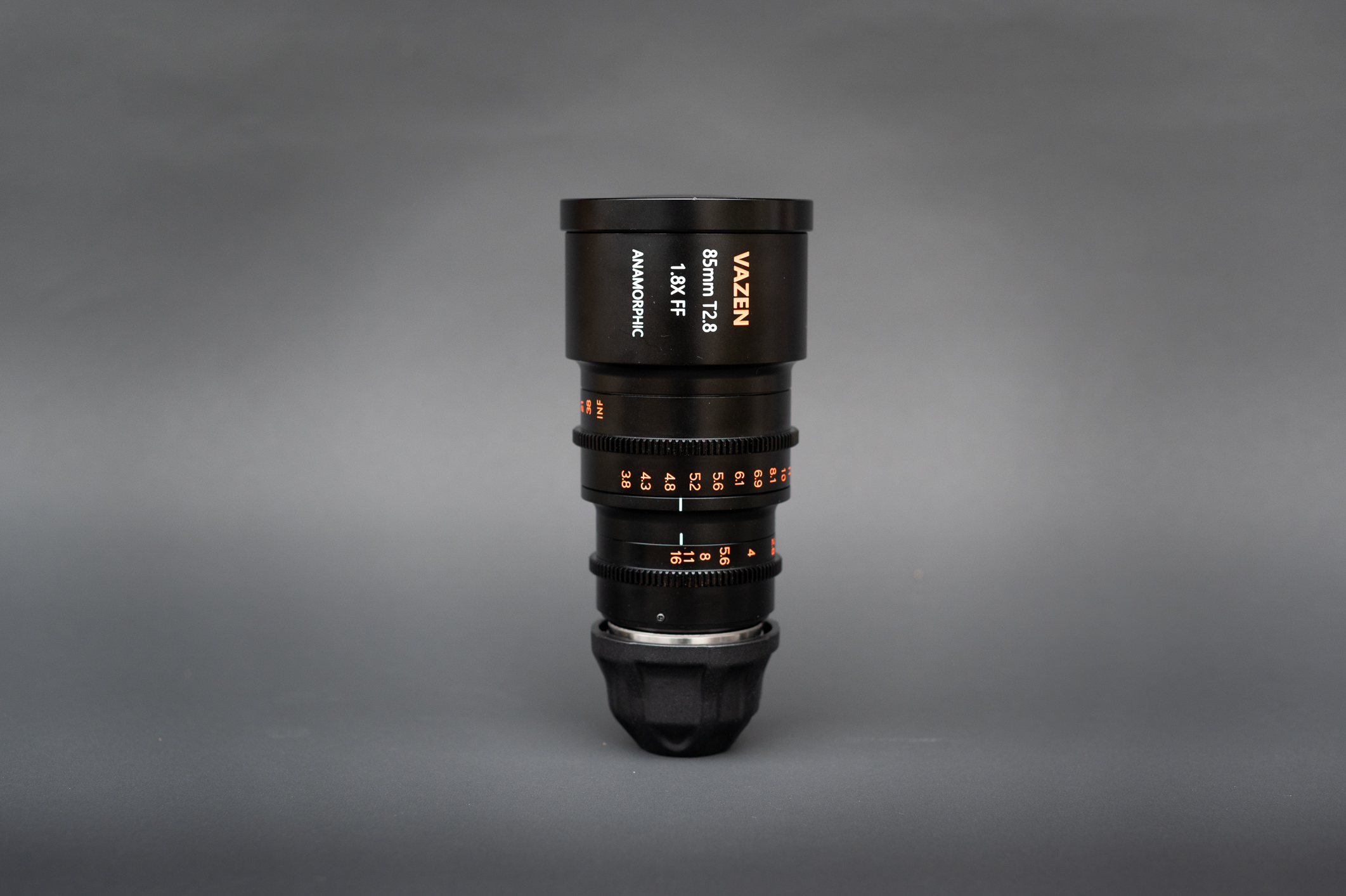 I’m pretty happy with the Vazen 85mm full-frame anamorphic lens. In Nashville, music, and heavy promo market, a lens like the Vazen 85mm could have an impact if it came with a full kit of lens options. If shooting for television, the lens might not be the best to use since many outlets prefer the 16:9 frame. Overall, the build is stable but lacking key details like focus and aperture marks. At $8,000, the price of the Vazen is inexpensive for an anamorphic lens but expensive for the target market I think Vazen is trying to interest. Let’s hope Vazen comes out with a whole kit of Full-frame 1.8x anamorphic lenses in 2021. Then I think we will start seeing these lenses out in the wild.