New features to the Pocket 6K

I can see the posts now “it’s the same camera.” “Oh, it’s the same sensor—nothing new here; best to move on.” Do not listen to that clickbait. The Blackmagic Pocket Cinema Camera 6K Pro is a wholly different shooting experience than the original. Yes, the internal sensor and Blackmagic RAW internal recording are the same, but the updates, well, they are to die for. I shot a little video of my daughter with the Blackmagic Pocket Cinema Camera 6K Pro. I shot all hand-held using only the camera and the new features available and not a single added accessory. 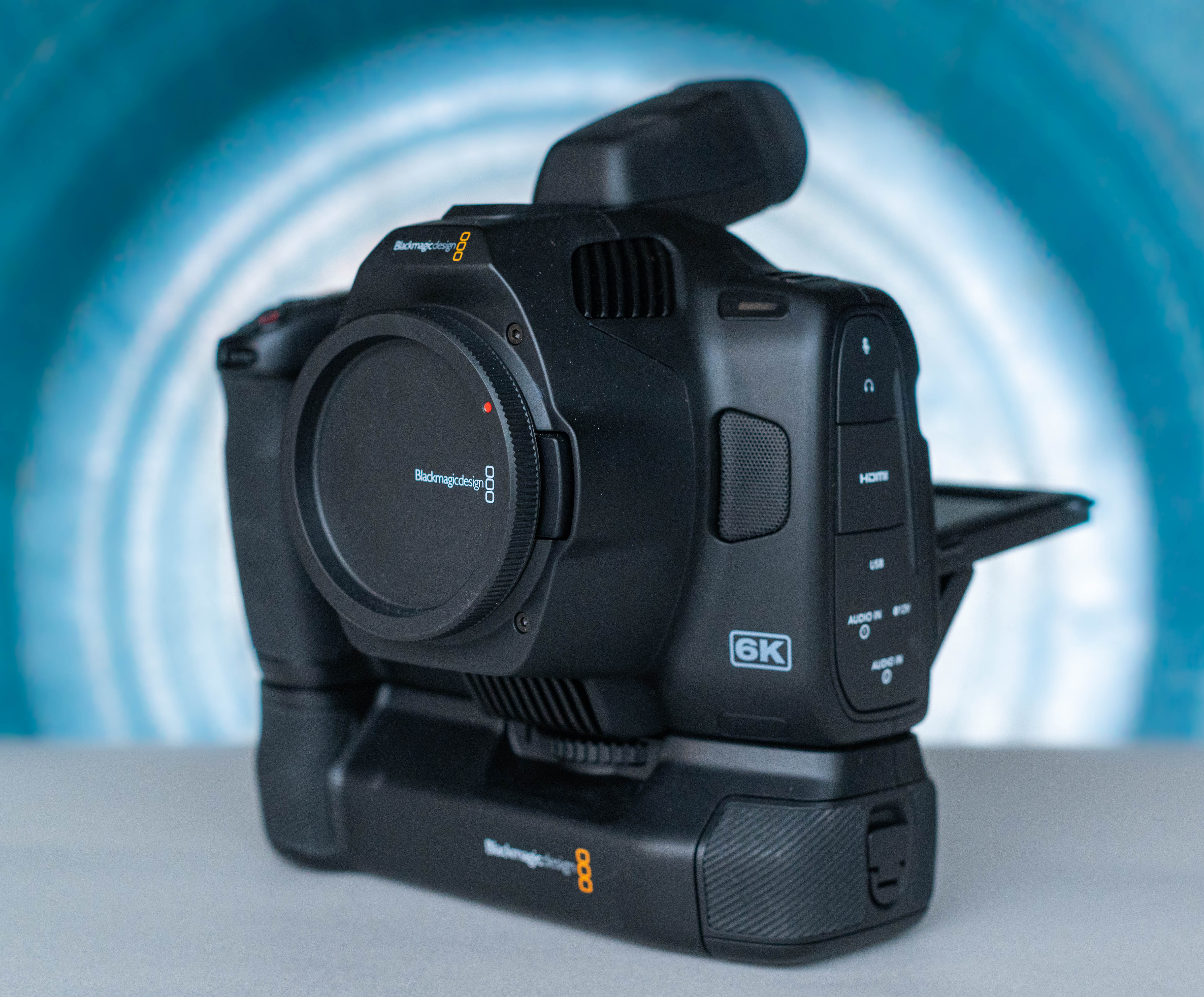 The list above has nothing to do with how a camera makes an image and everything about how you, the shooter, create an image. With the original Pocket Cinema Camera 4K and 6K, users needed to buy camera accessories to use the two outside during bright days. Hell, I’ve done this too. I use a SmallHD Focus 7 on top of the Blackmagic Pocket Cinema Camera 4K to better see what I’m shooting. If you think about it, it’s pretty ridiculous. I use a monitor on top of a monitor, essentially, to better see what I am shooting.

Well, this kind of Pocket Cinema Camera op behavior may now come to an end for Pocket 6K Pro shooters. I mean, I am one to attach a bunch of gear to a camera. Guilty as charged. Yet, having a camera requiring minimal spare equipment can make life easier for shooters in some situations. For me, I like less equipment attached to a camera which I will eventually forget and need.

The Blackmagic Pocket Cinema Camera 6K Pro comes with a new battery slot. No longer does the camera have a Canon LP-E6 battery carriage; instead, there is an NP-F570 battery slot. I believe this one change might be the most significant want from previous pocket camera users. Lord knows how many LP-E6 batteries I have littering my equipment area. Fewer batteries are easier to keep track of and keep. 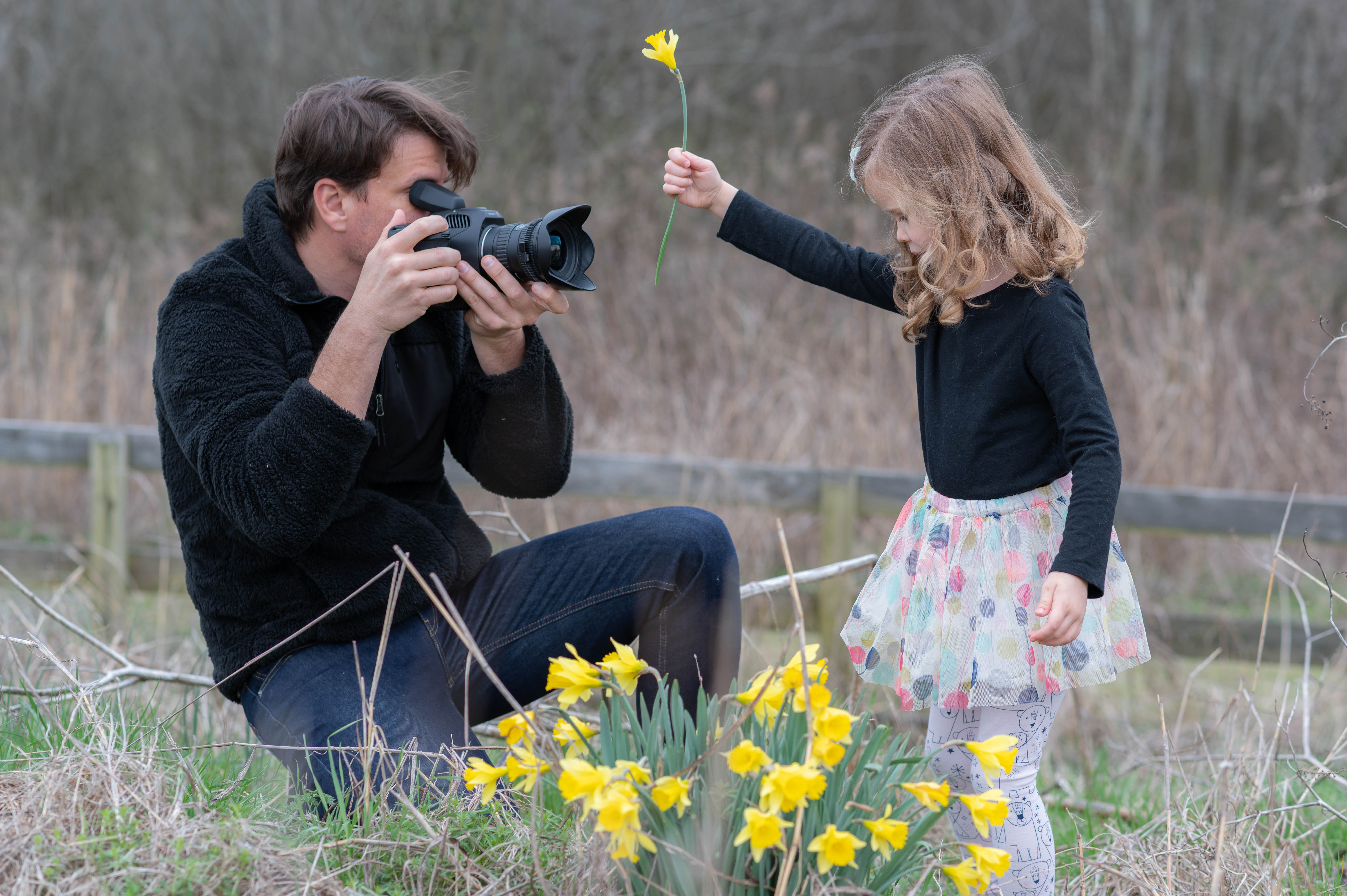 The NP-F570 allows for longer runtimes. How long? Well, I’m glad you asked. In my non-scientific testing, I shot several scenes, broll mostly, and I didn’t have to change a battery once. Know that most of my shoots are about an hour long. I think the new NP-F570 batteries give a confidence boost from hour to hour and a half of shooting time. The battery life depends a lot on how bright you have the LCD screen—the brighter the LCD screen, the shorter the battery times.

The size of the camera body obviously grows larger when attaching a battery grip packed full of batteries. How big does the combo feel? Well, it feels slightly more significant than a twin reflex medium format camera but also heavier. The camera’s weight and battery grip were not an issue for me, but I’m a decently fit camera operator with years of getting into camera shape. 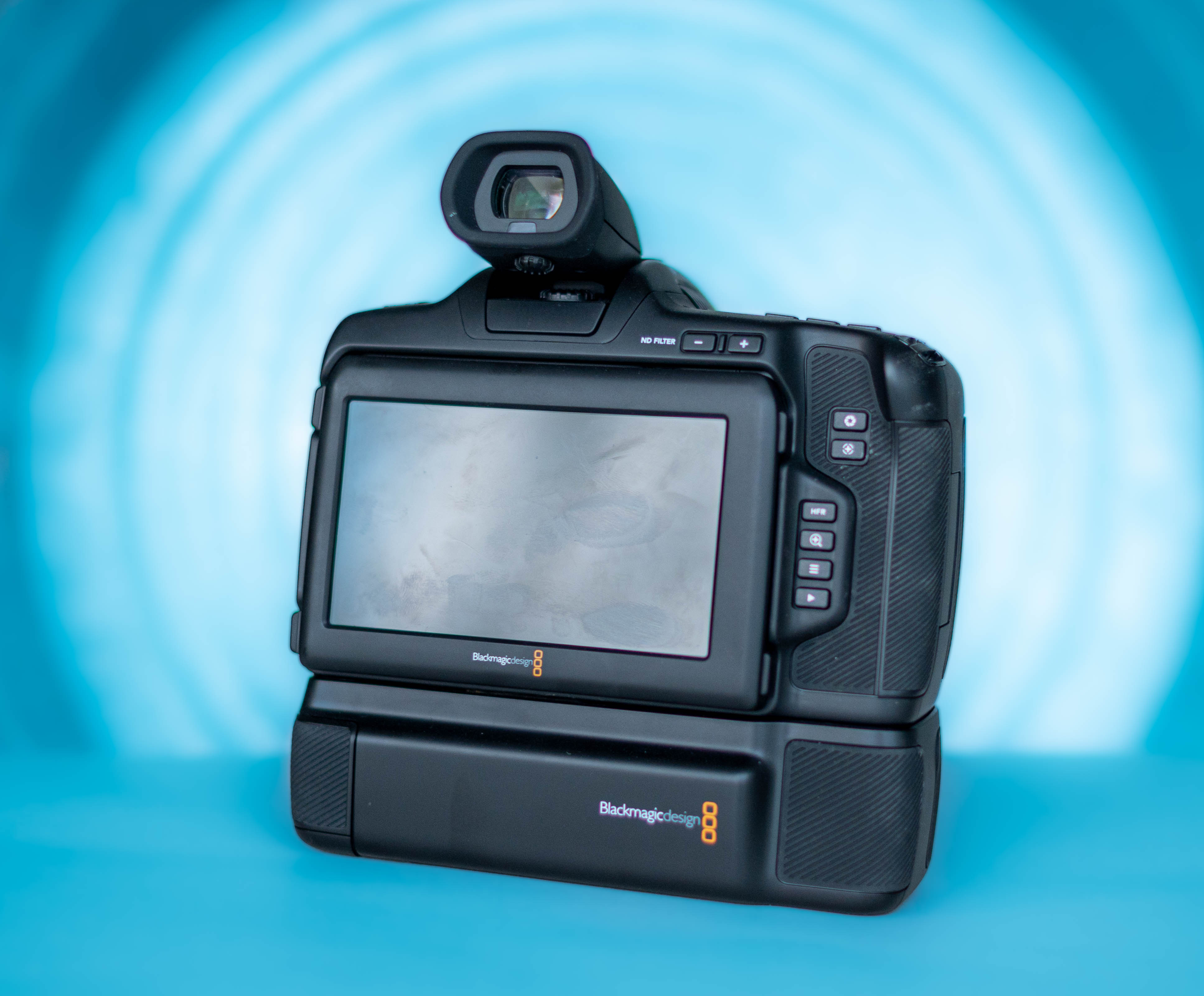 New Blackmagic Update 7.3 gives Pocket Cinema Camera 6K Pro users the ability to color calibrate the LCD screen on the 6K Pro camera. So, this means the LCD screen and the EVF should match better from here on out.

Upon first use, my wife, a stills photographer, commented she loved how the EVF tilts and wished mirrorless cameras like the Nikon Z7 or Canon R5 could have tiltable EVFs. As a married man, I know she’s right. Why don’t more mirrorless cameras have tilt-able EVFs? Bonus points go to Blackmagic Design to make the diopter strong enough to use the EVF without needing my glasses. 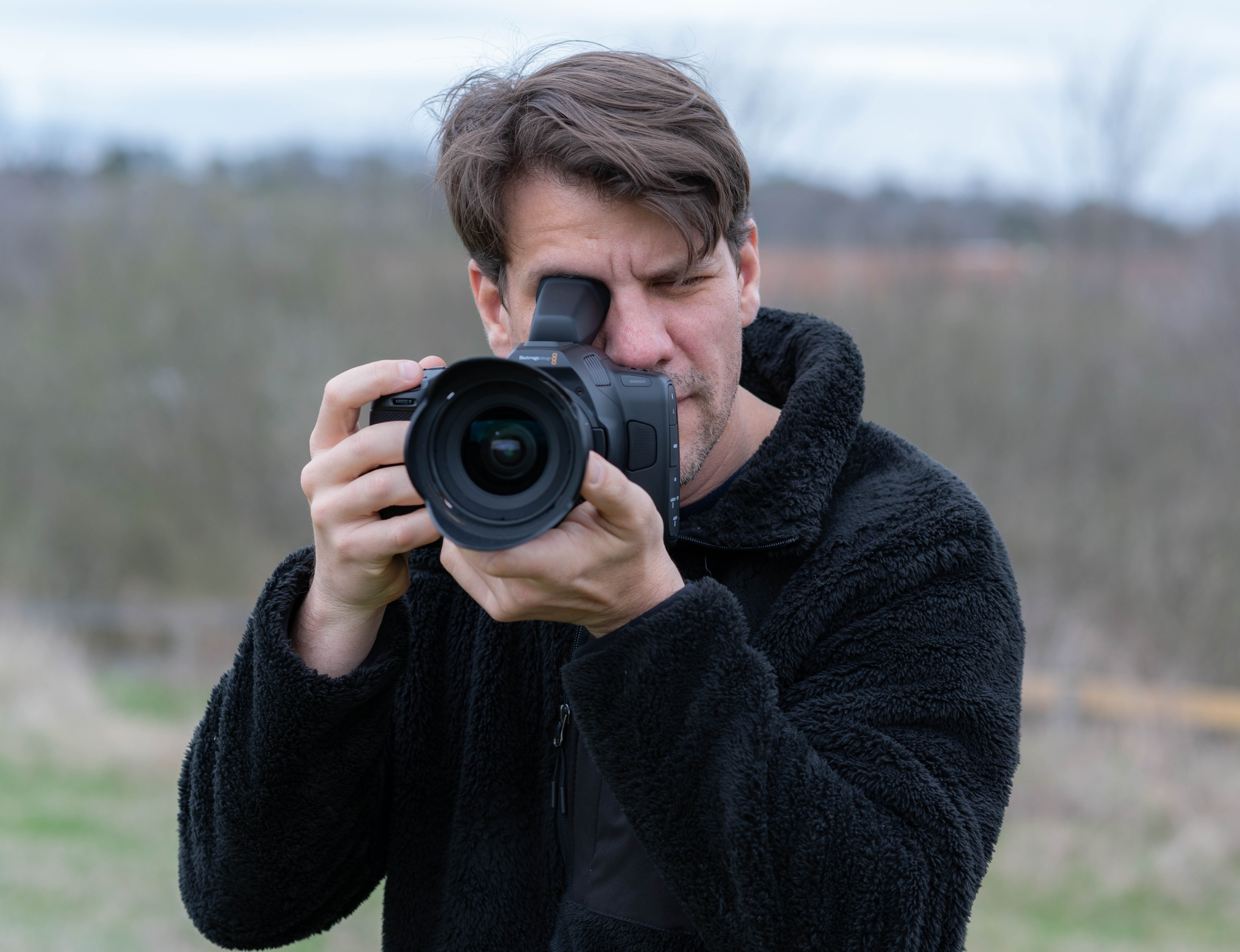 It’s brighter, and it tilts, and that is big news. At a beautiful 1500 nits, the LCD screen on the Blackmagic Design Pocket Cinema Camera 6K Pro is just usable in the bright summer sunlight. On most days, when the sun isn’t melting everything, the 1500 nits of screen brightness is more than enough to see and monitor your shot.

The new Pocket Cinema Camera 6K Pro LCD Screen comes with a decent-sized caveat; the LCD Screen isn’t fully color accurate. In my tests, the LCD screen showed afternoon sunlight coming through a window as a bit more cyan than the golden rays I expected. A quick view into the internal EVF and I could see the accurate colors.

Apparently, the rear LCD Screen on the Pocket Cinema Camera 6K Pro LCD is a D6500 screen. The differences between the rear screen and the attached EVF are not huge if you have the attached EVF accessory. ** Update*** Now that Blackmagic Design added user color calibration for the rear LCD screen the differences in color between the LCD and EVF should be minimal. Also, your first accessory purchase to go with the Blackmagic Design Pocket Cinema Camera 6K Pro really should be the EVF, seriously.

The other helpful feature for the new Pocket Cinema Camera 6K Pro LCD Screen is how it can tilt. Clearly, Blackmagic Design saw the modification offered by Titla for the original Pocket 4K and Pocket 6K. I do not care that Blackmagic Design saw what others were doing with their cameras and incorporated the feature. I’m just glad to see the addition to the Pocket 6K Pro.

The rear LCD screen tilts and locks into place. You can lock the screen into a horizontal plane facing up or down. How Blackmagic has designed the locking on the tilt LCD screen feels like the locking, and the tilt mechanism will last as long as needed; it feels solid. The locking into place is excellent for those moments you need to have the Pocket 6K Pro over your head. I’m also excited about tilting the screen upward, or nearly perpendicular to the camera, to allow for shooting with the Pocket 6K Pro like a medium format twin-reflex camera. I tended to shoot with the 6K Pro at waist height when using the tilt screen.

I nearly overlooked this added feature. In my defense, added mic inputs are easy to forget when a camera releases many other great and needed additions. Why is the second XLR Mini input important? Interviews. Interviews. Interviews. The Blackmagic Pocket Cinema Camera 6K Pro gives interview shooters the option to use both a lavalier microphone on a subject as well as a boom mic. Two XLR mini inputs and two different microphones give shooters a backup for audio and an editor to choose the mic delivering the best sound from the shooting environment. 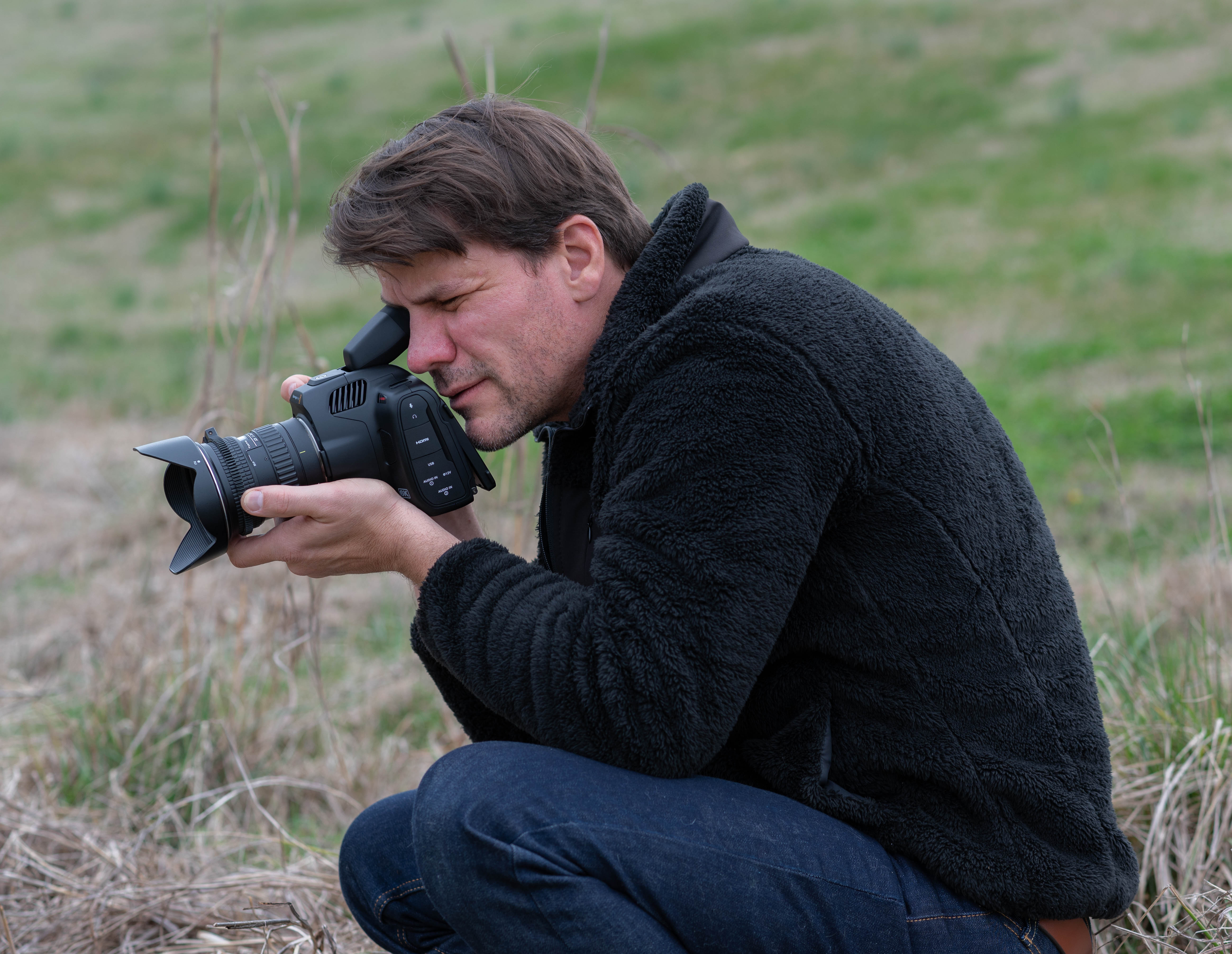 If Blackmagic Design added just one feature, adding internal neutral density filters is the winner we all requested. To me, the Blackmagic Pocket Cinema Camera user is not someone with an expensive matte box and case full of exorbitantly priced glass filters of every variety. The addition of the internal ND places the 6K Pro right where it needs to be for shooters. You have a camera with internal ND, the option for an inexpensive EVF, and a reasonably priced battery grip means you can pick up the camera and go out to shoot without weighing yourself down with accessories.

The buttons to activate the internal ND are in the right place too. Right where a user’s right thumb may rest are the two buttons. Now the internal ND is not the fastest to change from one density to another, but who cares. IR pollution? If I added a polarizer or more ND attached to the lens and the internal ND, I experienced a touch of IR pollution. A simple IR filter should solve this problem nicely. 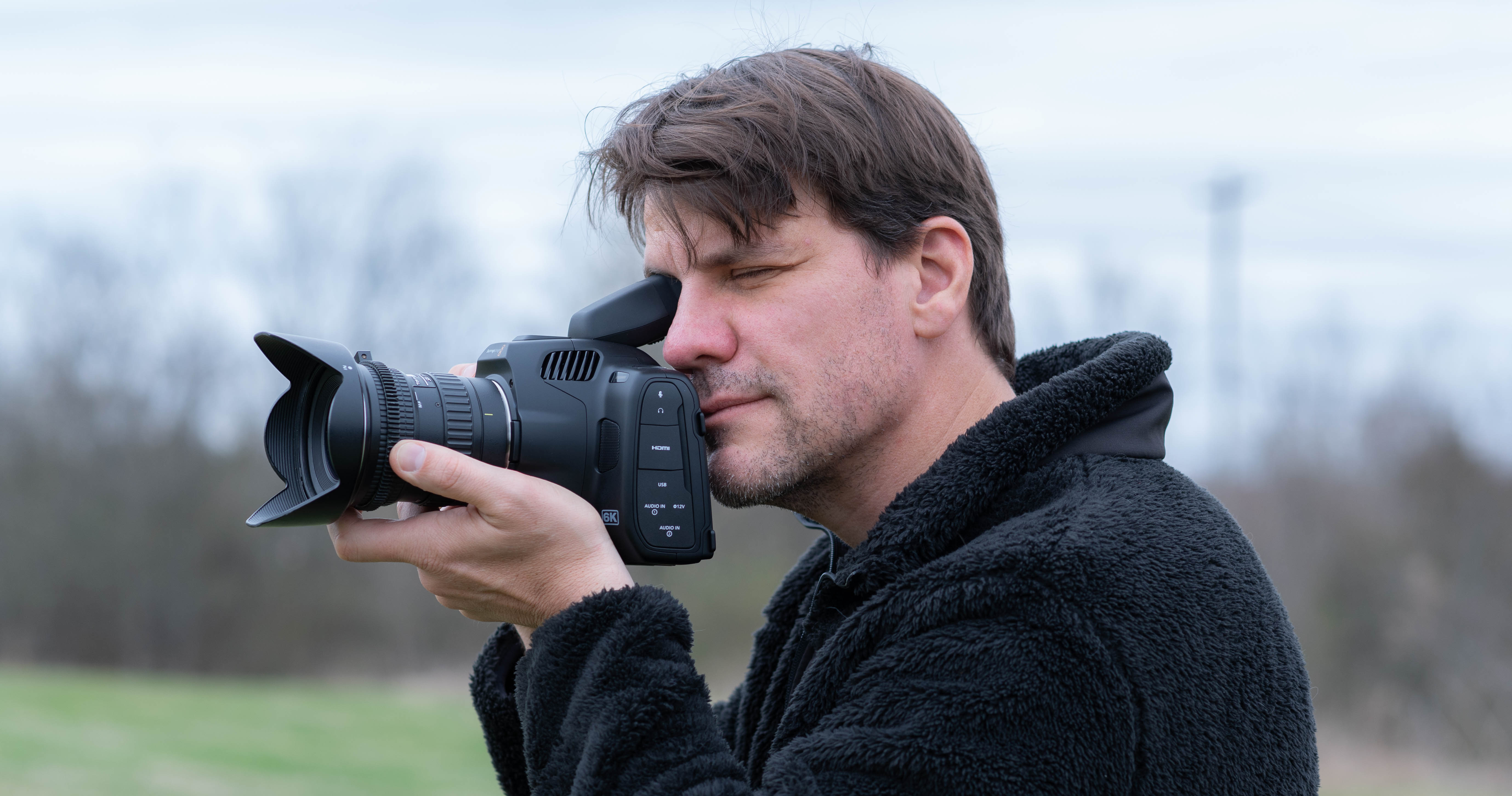 Competition is tough for digital cinema cameras these days. I believe Blackmagic Design was thoughtful to keep the price of the 6K Pro under $2500. If customers buy the 6K Pro, the EVF, and the Battery grip, the price falls around $3500, which is an excellent price for a 6K camera. Either way you may want to go; the 6K Pro is a very inexpensive camera capable of 6K Blackmagic raw and a color pipeline from acquisition to post-production.

With the price listed above, you get the new features like Internal ND, tiltable LCD screen, EVF, Second XLR mini input, battery grip, better options for batteries, and all the benefits of Blackmagic RAW. All in, this is a pretty good deal for some shooters. Cameras that appear on paper to be close to the Blackmagic Pocket Cinema Camera 6K Pro tend to cost quite a bit more for similar features. Like the URSA Mini Pro, the 6K Pro can be picked up and ready to shoot in seconds.