The first smartphone with a 1-inch type sensor said to use the whole surface area is news, no doubt, but don’t expect to be able to buy it any time soon, as the Xiaomi 12S Ultra is only available in China. 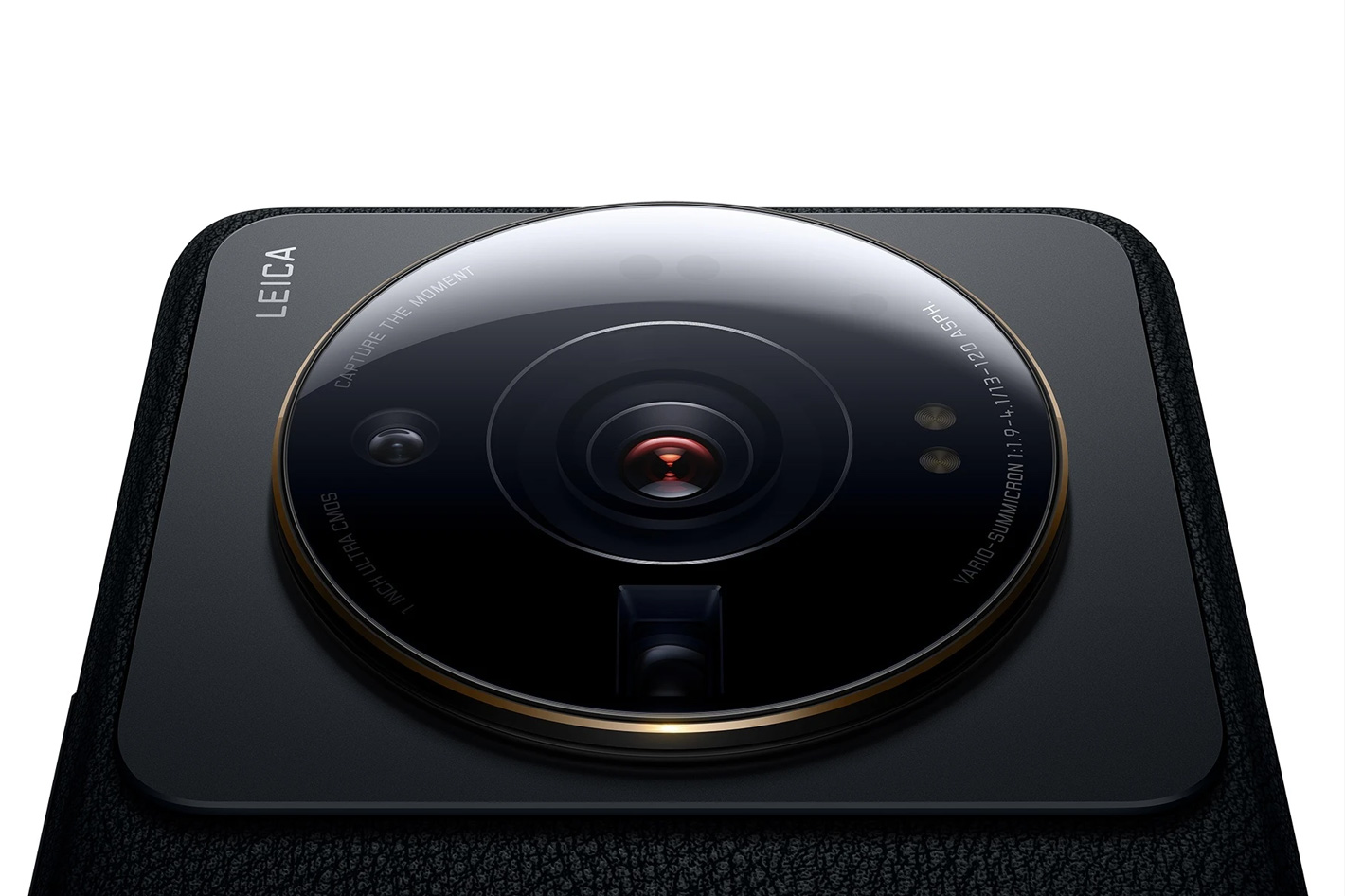 Engineered by Xiaomi, Sony and Leica, the new Xiaomi 12S Ultra is based around a 1-inch type sensor that for the first time, according to Xiaomi, use the whole surface area, as PVC mentioned in a previous article. The new flagship model, which will represent the top of the line for Xiaomi, is the first model – along with the 12S Pro and 12S – with a Leica logo on the body, a sign of the new partnership, announced last May, between the German company, known for its craftsmanship and industrial design, combined with innovative technologies, and the Chinese company, founded in 2010 and known for its smartphones and smart hardware.

The Xiaomi 12S Series “co-engineered with Leica” officially launched in China this July. The flagship model, the Xiaomi 12S Ultra, is the one that interests ProVideo Coalition readers, as it’s introduced as setting “a new standard in the area of smartphone photography.” We’ve written about the sensor before, so what was left to confirm was the optical choices made by Xiaomi and Leica for this model. Well, it’s a bit confusing, I must say…

Xiaomi says that the new smartphone has three cameras (not counting the one for selfies…): 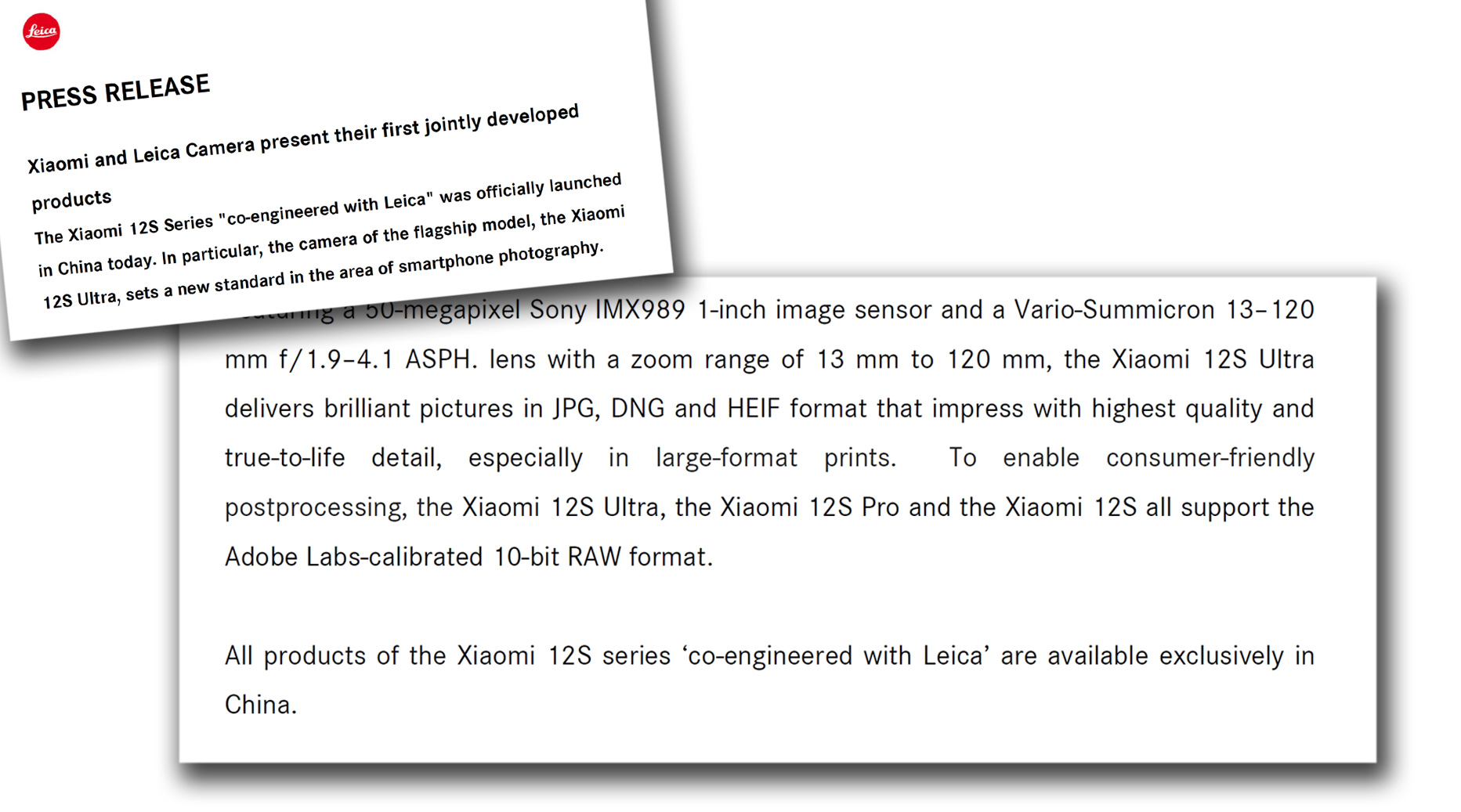 So, the new model has three prime lenses, 13, 23 and 120mm to be used by photographers and videographers, which are similar to many other models, with the difference that the main camera here is built around a larger than usual sensor that Xiaomi and Leica say “delivers brilliant pictures in JPG, DNG and HEIF format that impress with highest quality and true-to-life detail, especially in large-format prints.” 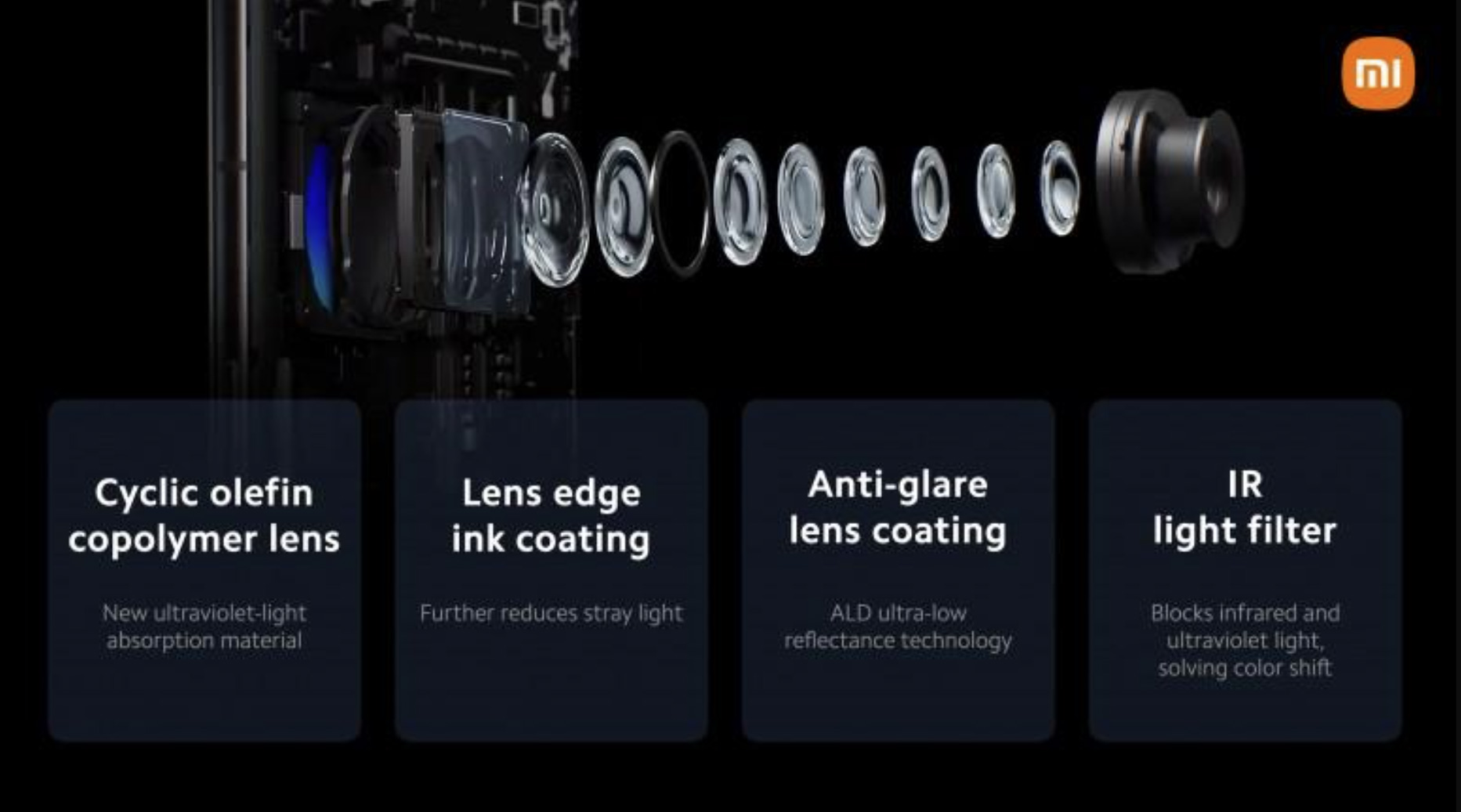 That’s still within the expectations, although only a real-world test will confirm if this new use of a 1-inch type sensor offers different results from those achievable with previous smartphones, like the Xperia PRO-I. What’s puzzling is that Leica notes, in a press-release distributed by the German company, that the Xiaomi 12S Ultra features “a 50-megapixel Sony IMX989 1-inch image sensor and a Vario-Summicron 13–120 mm f/1.9–4.1 ASPH. lens with a zoom range of 13 mm to 120 mm.”

The wording here is prone to create some confusion, and it’s even inscribed on the big smartphone camera module. Yes, it’s true that the Vario-Summicron lens label from Leica is being used here, but what’s included are three primes and not the “13–120 mm f/1.9–4.1 ASPH. lens” the press-release suggests. While the focal length range does go from 13 to 120mm, it’s achieved through the use of different optical primes as any eventual zoom will have to be based on a digital crop. 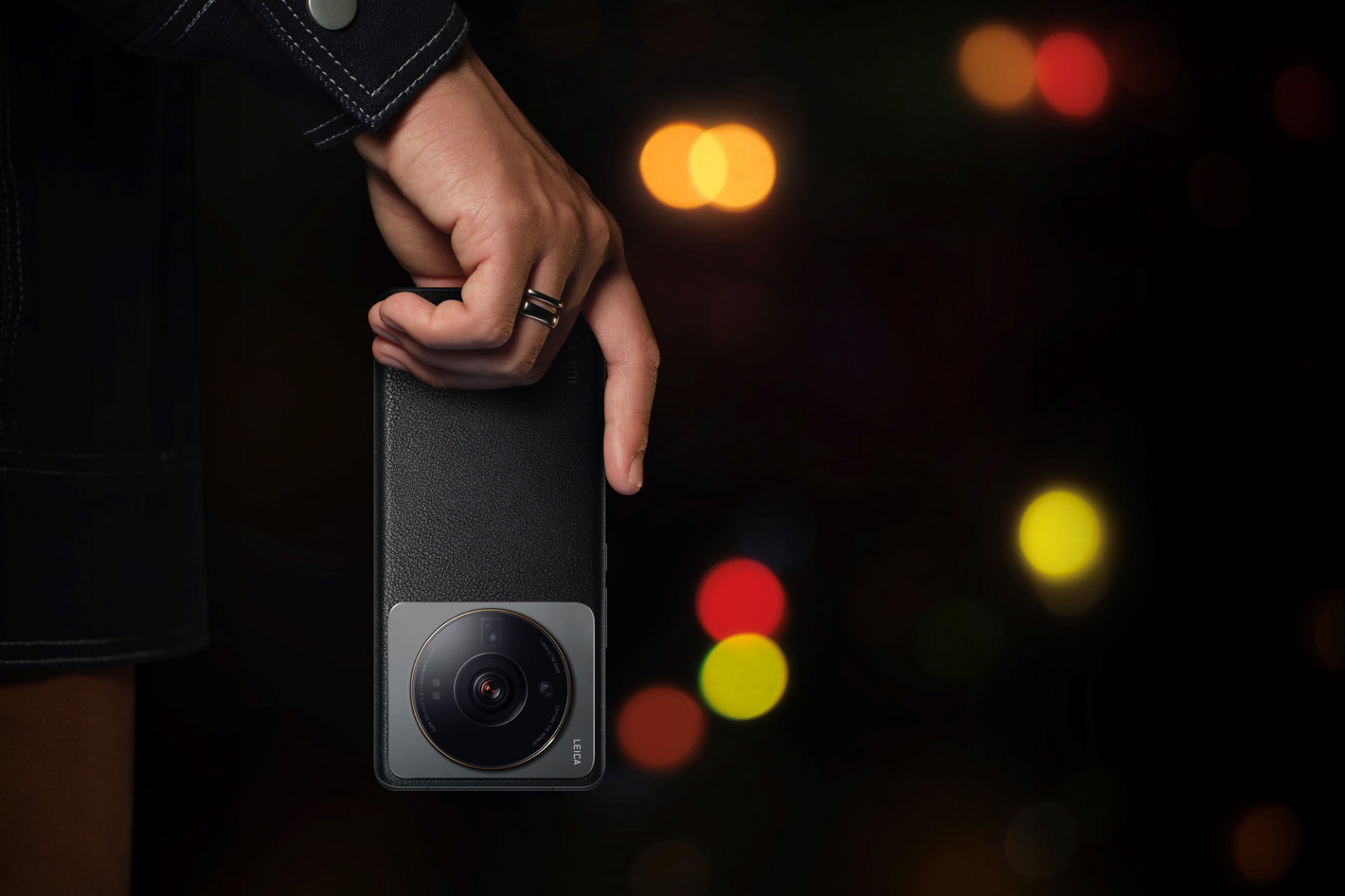 It’s unfortunate that a company as Leica, which has a reputation of precision, has somehow suggested that the Xiaomi 12S Ultra has a “13–120 mm f/1.9–4.1 ASPH. lens” … which it has not, although many would love to see that kind of optical zoom inside a smartphone. Just to make things clear, “zoom” is according to dictionaries “a camera shot that changes smoothly from a long shot to a close-up or vice versa.” The notation “13-120mm”, as used is usually applied to zoom lenses. For example, Sony mentions a 85-125 mm, f/2.3-2.8 for its Sony Xperia 1 IV, the first real optical zoom in a modern smartphone.

On the bright side (pun intended), users can expect a true rendition of the luminous captures made with a Leica Summicron lens, a name that refers to the large aperture (above f/2.0) of the series. Leica contributed its expertise in the development and realization of the camera module and lenses and, says the company, “a special highlight of the flagship model, and entirely new to the smartphone segment, is the choice of two different image profiles in the camera module.”

Although the “LeicaLooks” seem, IMHO, similar to the LeitzLooks present in the Leitz Phone 1, at least in terms of concept, so nothing new, consumers can select the options ‘Leica Authentic Look’ and ‘Leica Vibrant Look’. Developed especially by Leica, the ‘Authentic Look’ profile will delight Leica fans in particular and fascinate all other customers with smartphone images with the iconic ‘Leica Image Look.’ In the creation of the ‘Authentic Look’ profile, Leica imaging experts attached particular importance to an aesthetically pleasing and natural-looking rendition of colors, good definition in shadows, realistic local contrasts and the excellent reproduction of finest details. 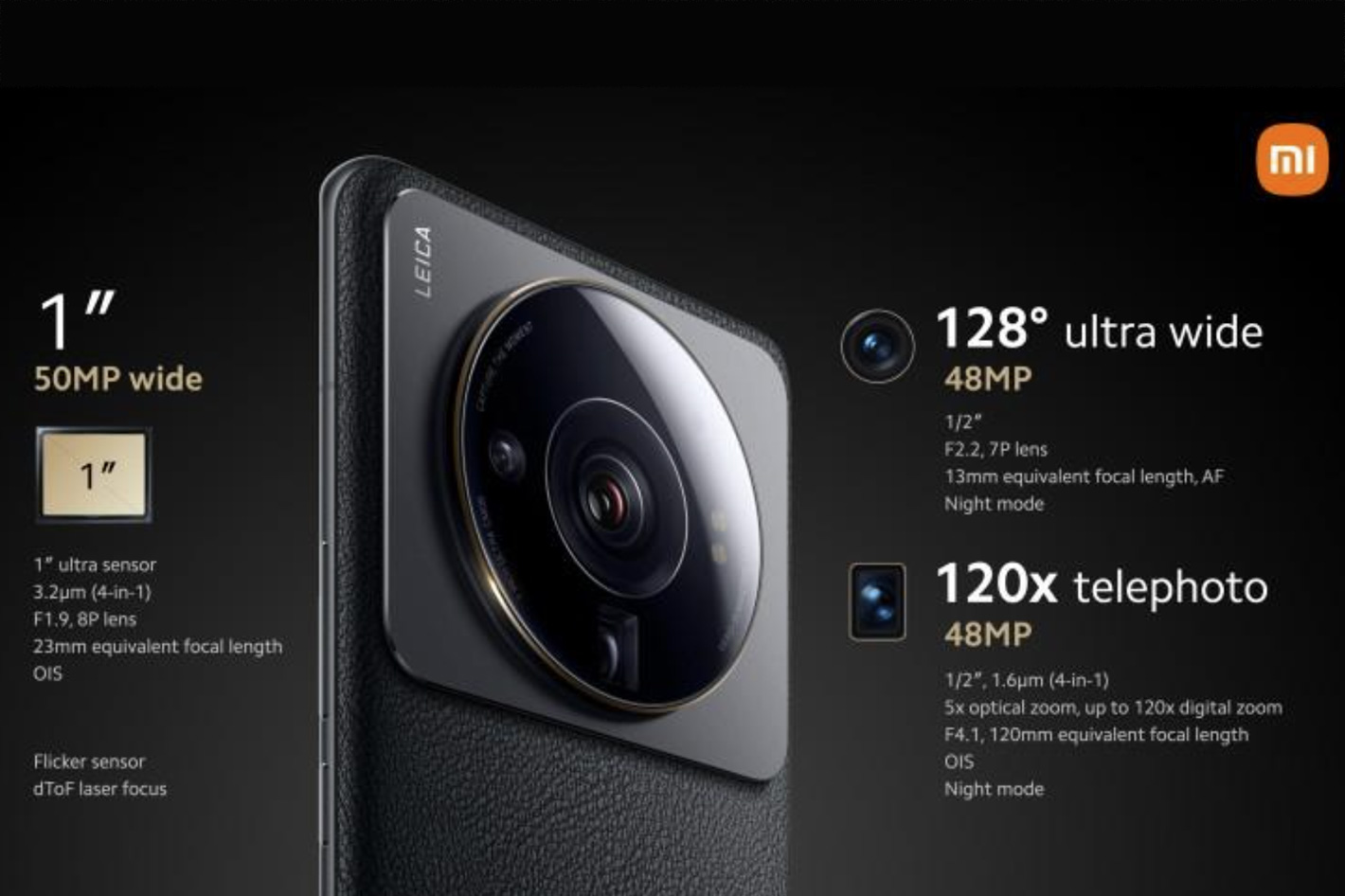 Leica says that in addition to this, the ‘Authentic Look’ profile features a reduced compensation of vignetting to ensure minimal darkening between the center and the corners of the image and lend it the typical look and character of a photograph captured with a Leica Summicron lens.

The ‘Leica Vibrant Look’ profile was jointly developed by Xiaomi and Leica. Through the combination of Xiaomi’s experience in the field of smartphone photography and the visual aesthetics typical for Leica images, photographers can, both companies say, “use this style to perfectly capture the emotions of a moment in vibrant yet realistic colour.”

In terms of video, Xiaomi says that Xiaomi 12S Ultra is Android’s first device to support Dolby Vision HDR recording, meaning it captures awesomely vivid color with better contrast… something that only a real-world test will confirm. Despite all the promises of this new model, no one knows if it will ever be available outside of China, so we all will have to use the other models, from Xiaomi and other brands, available. Some of them might also use the new the Sony IMX989 1-inch type sensor, although the Leica improvements will be, at least for now, an exclusive Xiaomi, when it comes to smartphones.