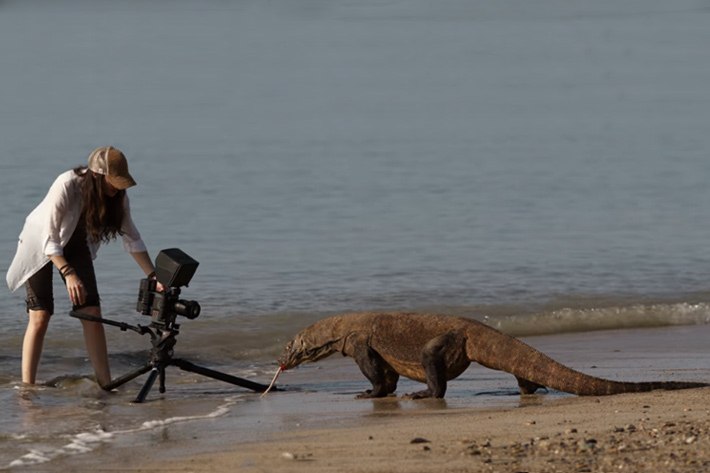 Shannon Wild and Russell MacLaughlin, Paul Nicklen, Andy Casagrande and Asgeir Helgestad all have a passion for nature and wildlife. They also have another thing in common: all use RED cameras.

RED’s Collective series is the ideal place to discover how different authors use the RED cameras they have chosen as their tool to share their visions with the world. The work of different filmmakers, covering different genres and areas, is displayed there, and each video is a lesson on technical aspects, but goes well beyond that, sharing with viewers how authors approach their preferred subjects.

The newest addition to RED’s Collective series features wildlife photographers and filmmakers Shannon Wild and Russell MacLaughlin. Renowned for capturing intimate shots of wildlife in their natural environments, the husband-and-wife filmmaking team take us behind-the-scenes while they discuss the immense passion and patience required to shoot wildlife, and the importance of having the highest-performance camera equipment to capture these unscripted moments.

Shannon and Russ’ award-winning images have been featured on National Geographic and Animal Planet, and in exhibits around the world, and in this 9-minute video they take us from the beaches of Indonesia with the Komodo dragon, to a journey in Kenya as they hunt with the big cats. Although they will share the importance of using professional-grade camera equipment, you’ll understand that you need more than that to come home with images like those: patience and passion are two key ingredients for a small team that, as Shannon says, is adequate for wildlife projects like those they pursue.

The amazing footage incited me to browse through RED’s Collective, which ProVideo Coalition has mentioned before, but this time I decided it made sense to pick the authors working with wildlife and nature subjects, and that’s how this longer note about RED’s Collective, the place “bringing visionaries into focus”, developed. I think it makes sense to share their videos here, and challenge readers to explore further the work from each author.

The second author on RED’s Collective is Paul Nicklen, who has dedicated his life to being an advocate for the Earth’s threatened polar regions. Paul uses the Sea Legacy Foundation to bring awareness to the species and ecosystems currently in peril due to climate change through immersive, visual storytelling.

The 7-minute video is, again, not a journey into the technical aspects of using a RED camera, but a journey into Paul Nicklen’s passion since childhood, and his path through a biology career until the moment he felt he needed more than data; he needed images, stills and moving images. As he says in the video, “the science is the foundation of what we know, but that does not create the emotional connection”.

Through Paul Nicklen’s words we discover the importance of “getting lost in the creative process” to share with viewers something that makes them care. Paul Nicklen’s conservation efforts to protect our oceans can be seen at the Sea Legacy website. Sea Legacy is a collective of some of the most experienced and renowned photographers, filmmakers and storytellers working on behalf of our oceans.

Andy Casagrande is the third author present at RED’s Collective who has a passion for wildlife, in his case, a very specific subject: sharks. In fact, Andy Casagrande has made a name for himself as one of the top underwater cinematographers in the world, and in the video he discusses how he channeled his fascination with sharks into a career.

Andy has spent years capturing the most daring underwater shots of sharks in their native habitats, and uses his work to not only show the grace and beauty of these often misunderstood animals, but also highlight an entire ecosystem that lays hidden below the surface.

An avid ocean conservationist, Andy Casagrande’s work can be seen at ABC4FILMS website, where one can read that “with more than 100 wildlife film credits to his name, Andy has shot & produced films for the world’s top television networks including National Geographic, BBC, Discovery Channel, ABC, NBC, CBS, FOX & Animal Planet.  Andy’s life-long mission is to inspire people to care about our planet & its vanishing wildlife.”

Asgeir Helgestad, the Norwegain wildlife photographer and filmmaker that closes this look at RED’s Collective series has worked as a professional since 1991, producing both stills and film for various clients. His video at RED’s Collective is, somehow, a departure from the others, with a strong Black & White presence that fits rather well the white landscapes the author knows so well.

Asgeir, who founded a film production company, Arctic Light AS, has a broad background as a film photographer, but he is particularly experienced in filming birds and mammals, as well as people on outdoor activities. He is trained in working under cold and harsh conditions since many of his projects are from the Arctic and Antarctica. His still photography and films have won him several international awards including prizes at the biggest wildlife film and photo competitions such as Wildlife Photographer of the Year and Wildscreen Film Festival.

Besides the passion for wildlife and RED cameras, Asgeir Helgestad shares something else with all the other filmmakers presented here: a desire to spread the word about the need to protect the planet we live in. That’s a message you’ll find in the four videos, which I hope you watch carefully, for all the knowledge and experience they offer. The beauty of that amazing footage is also something that will grab your attention!