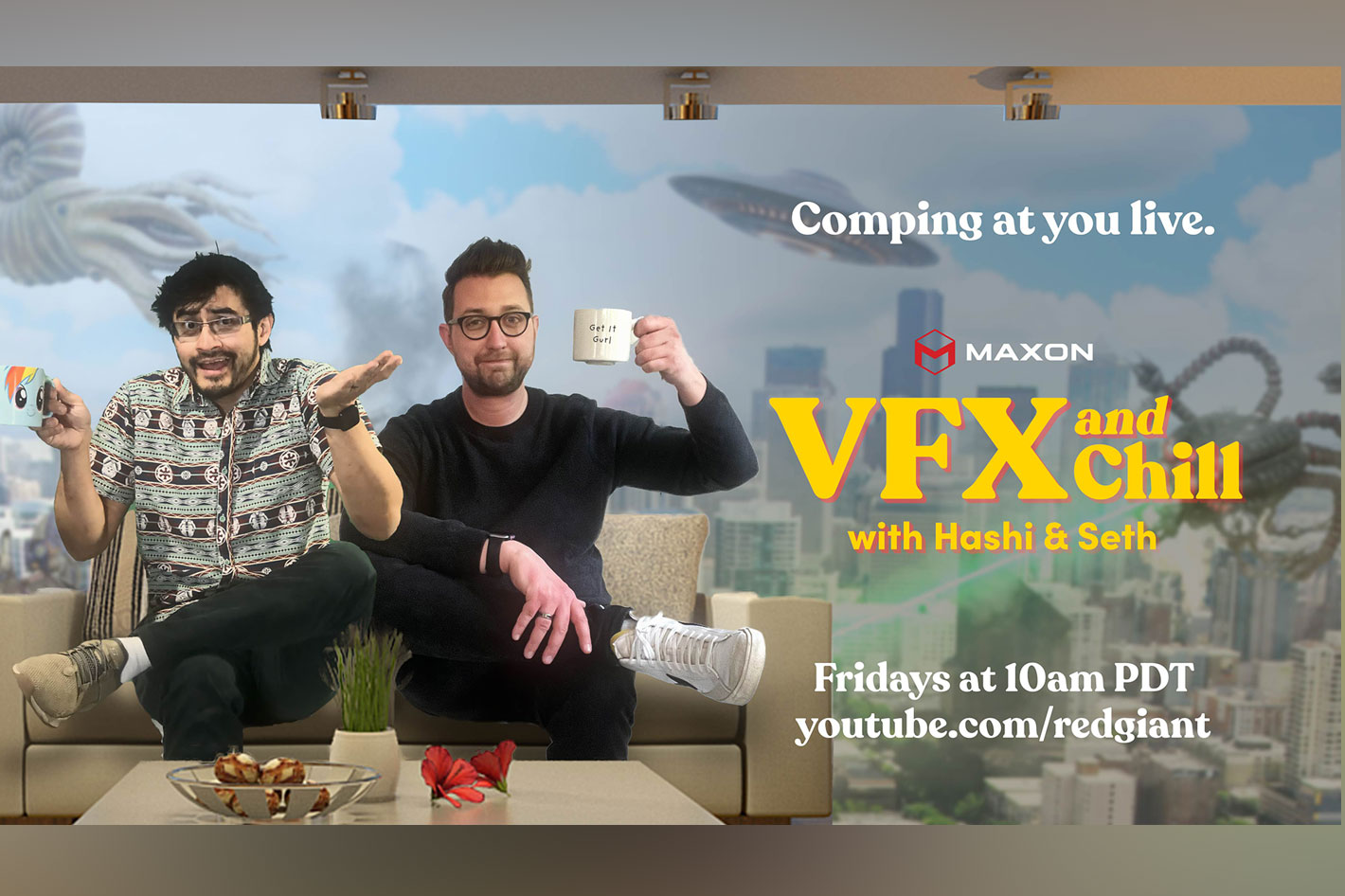 VFX Savants “Hashi” and “Seth” break down popular visual effects shots for artists in Maxon’s VFX and Chill” «, a 90-minuter show debuting May 28, 2021.

Premiering May 28, VFX and Chill is the logical step following the success of Maxon’s popular “Demystifying” and “Ask the Trainer” ongoing webinar series. This new weekly live talk show puts together the extremely famous Seth Worley and Maxon’s own Daniel “Hashi” Hashimoto (a.k.a. Action Movie Dad), both doing visual effects work LIVE BEFORE YOUR VERY EYES!

This buddy comp show tests the theory that two heads are better than one as they break down and try to recreate Hollywood special effects with no time to prepare! The duo will break open visual effects shots from film, TV or games, and attempt to show viewers how to put them back together. The 90-minute show debuts May 28, 2021 and will stream live every Friday at 10am PDT on YouTube.

According to Maxon, “each week the hosts (and the occasional guest artist) will peel back the curtain on a part of the VFX creation process that’s mostly omitted from tutorials: the exploratory, beginning stages of creating an effect, where artists throw ideas and iterations at the wall to see what sticks. It’s in that trial and error that the creator often discovers new workflows and tricks they never knew even existed. The hope is to inspire and educate, and maybe even introduce a few new techniques and tools that even veteran designers have missed.”

“VFX and Chill is more of an entertainment talk show format than an instructional tutorial,” commented Worley. “Sort of like if ‘VFX Artists React’ and conversational podcast collided and there were no survivors.”

o   Daniel “Hashi” Hashimoto is a veteran After Effects Artist from DreamWorks Animation, and creator of the viral YouTube Series “Action Movie Kid” partnering with Toys ‘R’ Us, Disney and Lucasfilm. He is currently a senior content creator at Maxon.

o   Seth “Seth” Worley is an award-winning director of short films, commercials, and explainer videos for Bad Robot and Sandwich. He is also the co-founder and creative director of Plot Devices, and a senior content creator at Maxon.

For dates and times for all Maxon’s webinars and events, and to register, visit the Maxon Events page.