Time-lapse sequences as those from Rob Whitworth or George Lepp show the variety and richness of this form of telling stories. 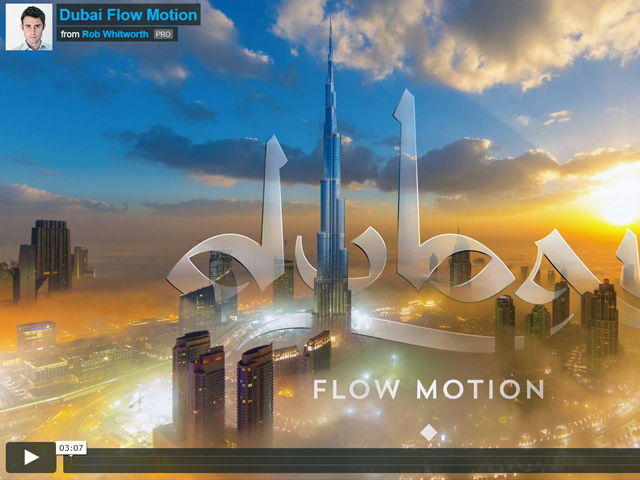 Advertising companies have understood the power of time-lapse to tell stories, so we’re seeing more and more of these time-compressed movies appear everywhere. There is a unique magic to time-lapses, whether they are the result of complex productions from a team working together or simple sequences of photos taken over a certain amount of time by a single photographer or cinematographer.

Obviously, time-lapse sequences are not going to take the place of video, but it is interesting to see how they became quite common in story telling. The technologies and tools have helped to spread the idea, making it accessible to more and more people. Two examples shown here demonstrate the potential of this process that has been made easier with digital systems and recent cameras.

Rob Whitworth time-lapse of Dubai Flow Motion is a feast to the eyes. Completed in January 2015, the 3.07 minute sequence was seen over 1 million times in the two and a half days after being launched. The number of views continues to rise, and the video is one of the most popular in websites dedicated to time-lapse examples.

Rob Whitworth time-lapse is not something that anyone can create without help and a vast understanding and knowledge of the tools and techniques. The author had assistance from Dubai Film for making this project possible and for providing the extraordinary access which enabled him to realise this story. In Dubai Flow Motion you’ll virtually fly into Dubai, first seeing the city from the cockpit of Emirates A380, and then be sharply thrown through the layers of Burj Khalifa, revealing the human activity bustling within. The whole dizzying journey concludes with one last shift of perspective: a skydive where you float above the frightening, but somehow familiar, aerial view of the world’s most mesmerizing cityscape.

Having access to places and a team to help you out is not enough, though. Rob Whitworth started with smaller projects and throughout the years has gained a reputation and some international prizes.  He is now considered as ”a prominent urban filmmaker pushing the boundaries of his medium to reveal locations in a powerful and compelling manner. Through the manipulation of time-lapse photography, Rob lifts the constraints of time and space to capture the vibrancy of destinations on a grand scale. Rob’s works are instantly identifiable, with gripping perspectives that create a profoundly transformative experience.”

Rob Whitworth states, on his website, that “my first impression of Dubai was that of super-tall buildings jutting out of the desert sand. However, after 3 months of exploration, research and filming, my lasting impression is of the eternal wonder of the desert and the importance it holds for the Emirati people.”

On the other extreme of these time-lapse essays you’ve George Lepp’s “Winter Clouds Over the Oregon Cascades”, published in February 2015, a theme easily accessed by anyone wanting to try time-lapse, and a good example of the power of the medium to represent simple things. Clouds moving in the sky are always a fascinating theme, and in this 2.40 minute time-lapse the popular photographer shows how easy it is to create them with the new interval timer present in the Canon EOS 7D Mark II.

The feature is quite new in Canon cameras, as with previous models photographers needed to buy an interval timer to attach to the camera. The new Canon EOS 7D Mark II has the interval timer built into the camera, making at even more interesting camera for those that want to create time-lapses. In one article published at Canon Digital Learning Center George Lepp explains how to use the feature. Through it users have the option of setting the number of captures from 1 to 99 or set to “Unlimited”, and define the time between each exposure from 1 second to 99 hours, 59 minutes and 59 seconds.

Why create time-lapses instead of video in a time when most cameras offer video capture options? This is a regular question, and the answer is simple: time-lapse sequences can last for hours and it is easier to deal with hundreds of even thousands of images than with a whole sequence of video from which to extract images. Also, using a picture camera – what many cinematographers do for time-lapse – allows for more control in terms of exposure, needed for fine-tuning the results, and a bigger frame to work from, allowing for panning, cropping and zooming  without lowering the final video quality,  especially if you are working for a Full HD result. A full frame DSLR sensor, as the one of the Canon EOS 5D Mark III, has 5760 × 3840 pixels, so it’s a bit like shooting in 4K to then select the area of the frame you want to use for your video.