Presented as the camera opening a new world of possibilities for ambitious photographers, from taking the shot to editing the image and sharing it on the web, the ZEISS ZX1 has Adobe Lightroom CC inside. 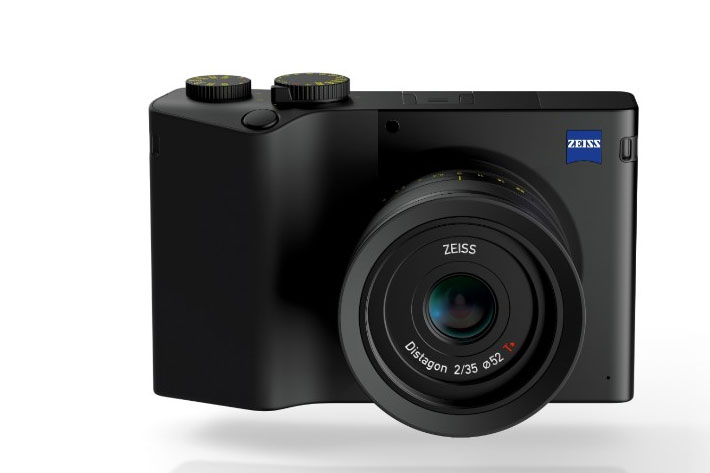 Ugly, huge and strange, the new ZEISS ZX1 is the first camera in the world to come with a subscription plan. Adobe Lightroom CC is inside, so that you can edit images in camera, using a 4.3″ multi-touch display.

Announced at Photokina 2018, after a couple of weeks where ZEISS made the news with images showing it partially, the ZEISS ZX1 is real. Or better, it will be somewhere in 2019, when the camera makes it to the market, at a price that ZEISS didn’t disclose but will be somewhere beyond the $4000 mark.

ZEISS is known for its lenses so this camera is an unexpected offer in modern days, although ZEISS did have some cameras in the past, most recently with models as the ZEISS Ikon, which was nothing like the models from older days. In fact, the ZEISS Ikon introduced at Photokina 2004 was manufactured by Cosina in Japan, and was derived from the Cosina’s Voigtländer 35mm Bessa series. The camera was discontinued in 2012 and ZEISS has not introduced any camera in recent years. Until now. 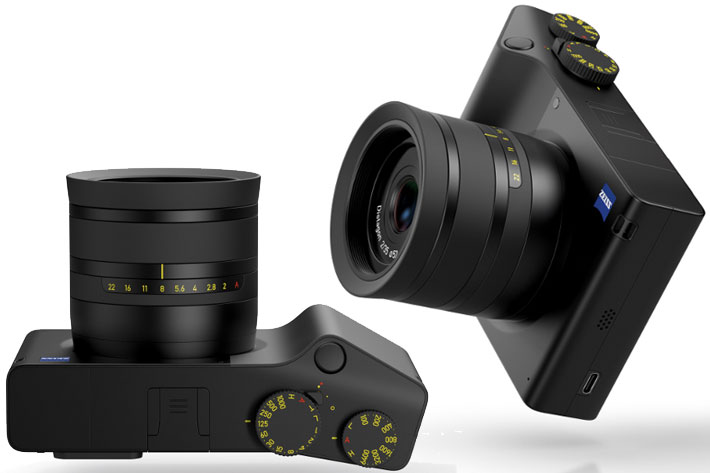 Presented as a mirrorless full-frame camera, the ZEISS ZX1 is more of a compact – by name and not by size – than a mirrorless, as it does not have interchangeable lenses. It features a ZEISS Distagon 35 mm f/2 T* lens with autofocus that has been, says the company, perfectly matched to the 37.4 megapixel full-frame sensor developed in-house at ZEISS. The interplay between the lens and sensor ensures, it is said, first-class picture quality with that typical ZEISS look.

With this model ZEISS aims to offer “an operational concept and user experience that make the photographer’s jobs-to-be-done as intuitive as on a smartphone.” What this means is that the photographer can now Shoot, Edit and Share, as ZEISS puts it. The company says that “the ZEISS camera concept is just the first step to opening up a new world of possibilities for ambitious photographers – from taking the shot to editing the image and sharing it on the web.”

Harmonized hardware, software and optics for a seamless creative process, that’s what ZEISS promises, and the company even suggests that this is “the camera concept for the creative flow in photography”, and the “first full-frame camera from ZEISS with first-class image quality and the familiar, intuitive image editing and connectivity of a smartphone.” It’s as if ZEISS wants, with this camera, to attract smartphone users looking for a new camera. At this price? And for sharing photos online?

While this all may sound fantastic to some, it reminds me of one camera, the Samsung Galaxy NX, from 2013, which was also the first of its kind. The Samsung NX, which was discontinued even before Samsung vanished, without a word, from the photo market, runs on Android, and although it isn’t a smartphone, it offers Wi-Fi and 3G connectivity, and a GPS receiver, and can be used for telecommunication, including video, over the Internet. The software package included allows for in-camera organizing, editing and online sharing or storage of images and videos. As for software, it can be downloaded from Google Play.

The Samsung NX, a mirrorless interchangeable lens camera with a DSLR-like shape that, in fact, pointed in a new direction, has a 4.8” LCD touchscreen (1280×720 px), which is bigger than the 4.3″ multi-touch display (also 1280×720 px) present on the ZEISS ZX1. ZEISS says this display is the key to its new camera. It enables photographers to professionally process RAW images directly on the camera thanks to fully integrated Adobe Photoshop Lightroom CC.

Moreover, the ZEISS ZX1’s unique user interface supports the user’s particular workflow without any interruption -– providing direct access to the most frequently used functions via a 4.3″ multi-touch display. Just like the Samsung NX, which looked as a camera designed to attract step-up users – from smartphones – but which smartphone-like interface was not, probably, something advanced photographers wanted to deal with. 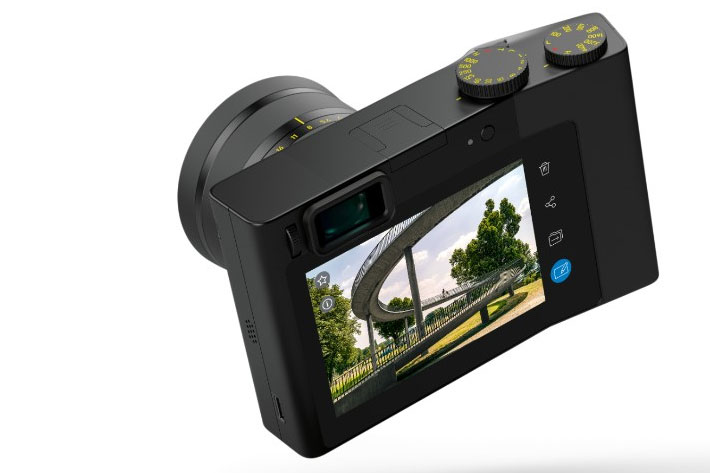 Before we continue, here are some of the specifications of the ZEISS ZX1. It offers an EVF and has a hot shoe compatible with Sigma flashes. The camera features a 512 GB SSD for internal memory “which provide sufficient space for approximately 6,800 RAW files (DNG) or over 50,000 JPGs – more than enough to handle photos, even during a longer trip, and giving the photographer the chance to let their creativity flow. Versatile connectivity options such as Wi-Fi, Bluetooth and USB-C ensure that various peripherals can be connected. Over-the-air software updates keep the camera up to date without requiring a computer connection.”

In terms of video, the ZEISS ZX1 offers 4K UHD (3840×2160 pixels) at up to 30fps and Full HD at up to 60fps. Video capture is limited to a maximum of 15 minutes, with internal memory able to keep about 20 hours of video. It is also possible to use external storage through USB-C but further information on this is not yet available. The camera has connections for external microphone and headphones via USB-C, as well as HDMI. 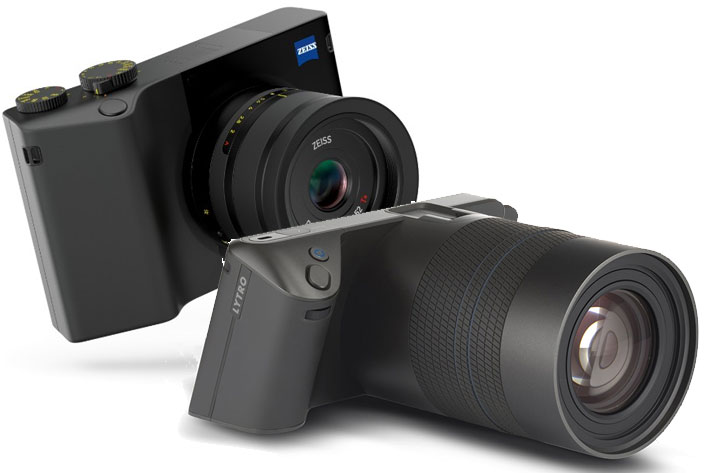 In terms of design “the ZEISS ZX1 is characterized by its iconic shape with carefully crafted details. The overall form and reduction to just those elements that are absolutely necessary lay the foundation for an ergonomic camera and ensure easy handling. The symbiosis of hardware and software is exemplified by the newly defined user interface that utilizes the 4.3″ multi-touch display. The slightly bent screen separates the live view from the control elements, making camera operation comfortable and straightforward.” In terms of design it is, to a certain extent, similar to the now defunct Lytro ILLUM. That’s my opinion.

“We know that we are exploring new ways and initially addressing a special target group with the ZEISS ZX1. With our concept we are focusing on ambitious, professional creatives who want to produce their photographic experiences quickly and efficiently, and inspire as many people on the Internet as possible. This requires a streamlined workflow in addition to high-end features. This is exactly what the concept of the ZEISS ZX1 offers,” explains Jörg Schmitz, Head of the Consumer Products business group at ZEISS. 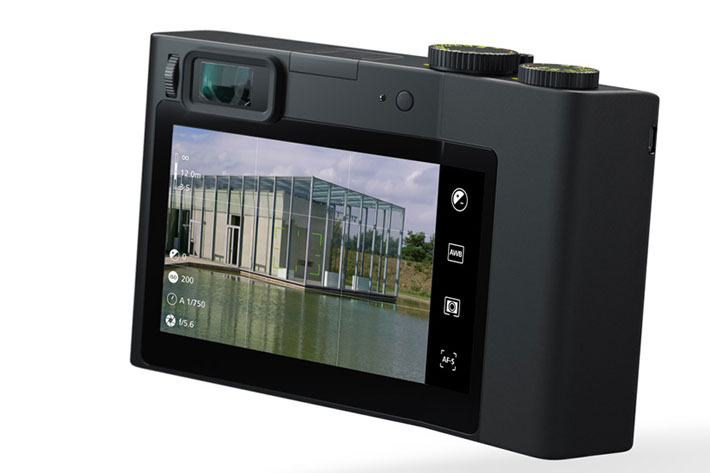 So, five years after the introduction of the Samsung NX, ZEISS picks a similar concept and presents it as the solution for photographers on the move, by integrating Adobe Photoshop Lightroom CC. The indication that the camera saves RAW files as DNG suggests the path ZEISS is taking. As no other option is available in terms of RAW, users of the camera will be bound to DNG – Adobe’s proprietary format – or JPEG. Besides, by having Lightroom CC inside the camera, ZEISS has created the first camera in the world with a subscription model. As the camera also does video, shouldn’t it have a subscription model for Adobe Premiere Pro?

In fact, unless there is something missing from the information available, buying the ZEISS ZX1 means entering in a long relationship with Adobe, as expected and in fact suggested by the information available on ZEISS’s webpage, where you can read: “Process your images from anywhere in-camera with this intelligent solution: from exposure and color corrections to selective edits, syncing to Lightroom CC on your computer and much more (some features require a Creative Cloud Photography plan subscription).” 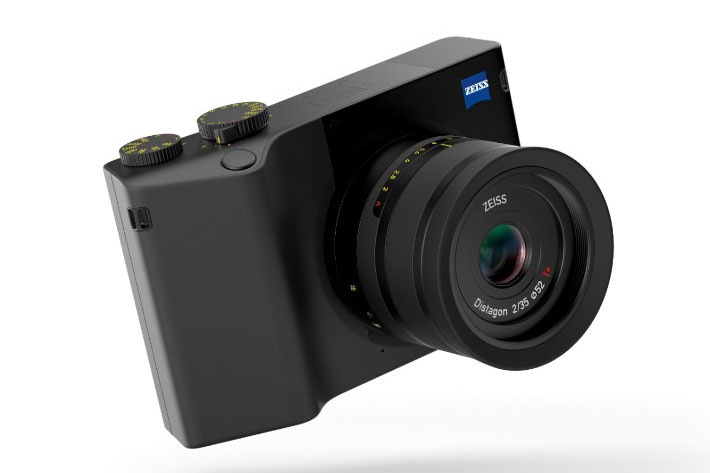 Will there be a ZX1 with other photo editors?

The evidence is there: if you want to fully explore the potential of the camera, you’ve to be a Lightroom CC user. In a time with so many alternatives available in terms of photo editing, will ZEISS also create models of the ZEISS ZX1 with integrated versions of Skylum Luminar, ON1 PhotoRAW or Serif Affinity Photo, that do not have a subscription model associated? It would mean that, even if updates were available, you could skip them and still keep using the software, something that you can not do with Lightroom CC, meaning that if you stop paying, part of your ZEISS ZX will not work… Obviously, as the ZEISS ZX1 uses Android, you may – I am not sure – install any other software, or even use Photoshop Express (which is free).

While I understand, to some extent, ZEISS’s excitement with the idea that photography is a journey and you should not make editing a stopping place, the truth is that you can’t do both at the same time, so you’ve to stop photographing – and walking – if you want to edit your photos. And that takes me back to reality: in a world where cameras and smartphones are easily connectable and connected, I must admit I don’t see many people using a 4.3″ multi-touch display to edit photographs. After all, modern smartphones have 6.5”, and there is no problem moving images – still or video – from your camera to your smartphone or tablet, where you not only have more screen space, but also have other options in terms of editing software and probably, in some cases, more power. Without subscriptions…

Reading the comments already available online, you’ll find people excited with this camera, some even stating that it is “very forward-thinking and innovative”, and that’s natural. But I’ve had enough of promises and dead-ends, from Minolta’s Creative Expansion Cards or Canon’s EOS Barcode Reader to Vivitar’s Q-dos 3-Dimensional Lens System, Ricoh’s GXR Modular Camera System or Lytro’s Light-Field Cameras (Lytro, by the way, ceased operations March 2018) to mention a few, so it is hard for me to look at the ZEISS ZX1 as more than a curiosity that will soon fade way.

Anyways, as ZEISS states, the ZEISS ZX1 will be available at selected dealers in early 2019. ZEISS will announce the recommended retail price at the start of the official market launch. Starting now, anyone interested in receiving information on exact availability can register at the webpage created for the product. 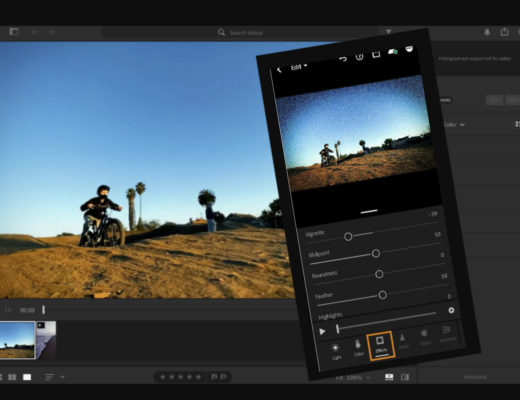