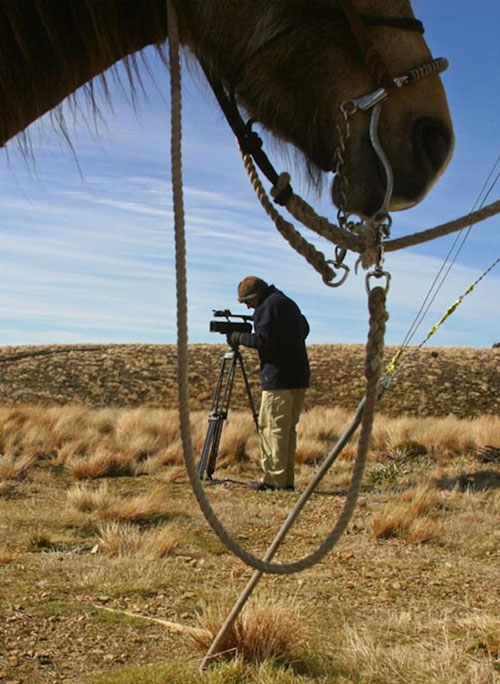 Cinematographer Tom Burstyn CSC credits his “trusty” Vinten Vision 3 pan and tilt head and carbon fiber legs as a key to completing his four-year labor of love – This Way of Life – that recently opened at the prestigious Vancouver Film Festival. The documentary tracks the story of a wild family that spends much of their time in the remote mountain ranges of New Zealand, raising and training horses.

“Vinten has never failed me,” says Burstyn, who has counted Vinten equipment as a key to his success on many of the 30 features and 50 television shows over his career. “I chose this particular combination for This Way of Life, because of its light weight and robust construction, but mostly because of its smooth operation. I liked the carry bag that came with it.

“I had to follow our subjects on horseback through extremely rough terrain,” he explains. “We crossed rivers flooded by winter rains and hiked high up in the ranges to get the great shots. And when we shot on the beach, the legs were in the surf. I needed a tripod and head combination that was strong, yet light enough to pack on a horse. I wanted something that I would never have to worry about, that would perform as well in the cold and damp after a rough ride and years of wear, as it did the day I bought it.

“I take good care of my equipment, but I don’t baby it. First and foremost, my gear is meant to be used as a means to an end. It needs to work, so I can tell my story. When things were breaking fast with wild horses doing what wild horses do, I had to be faster. The Vinten tripod sets up quickly and the legs tighten and loosen perfectly, thanks to a simple, quick mechanism. The head levels fast, thanks to the big bowl and an illuminated bubble.

“If I showed you the tripod today, after four years of torture, you would think that it was a few months old. It looks that good. It was exactly what I needed, to support me without worry, when I was shooting This Way of Life.”

This Way of Life, a story of love, tolerance, forgiveness in the wake of adversity, was produced by Canadian-born and long- time New Zealand resident Tom Burstyn and Barbara Sumner Burstyn. It was first seen by sold-out audiences at The New Zealand International Film Festival. It is slated to open at several other festivals around the world, following the recent showing at The Vancouver International Film Festival.