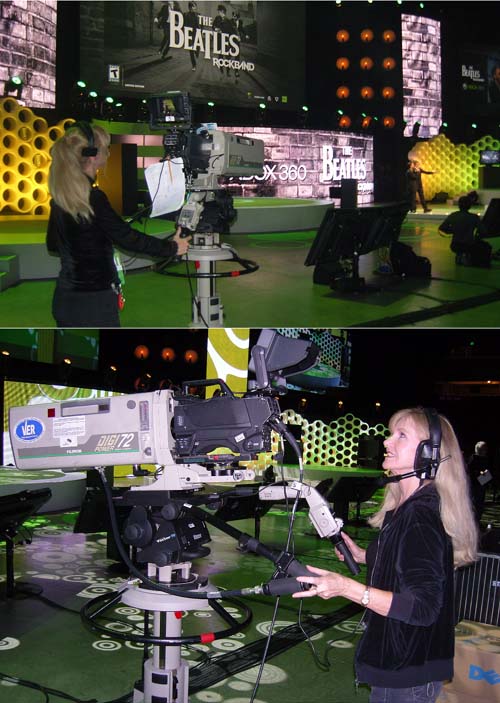 When Susan Campbell shot the Beatles reunion at the E3 Gaming Convention, introducing “The Beatles: Rock Band” video game, a Vinten head supported her camera. “Having a Vinten head made operating on this 90-minute live broadcast for the G4 network all that much better,” says the veteran camera operator.

Campbell, who has shot concerts for everyone from Santana, AC/DC, David Bowie, Aerosmith, the Grateful Dead to the Police and Bruce Springsteen says Vinten is the head for shooting rock and roll. “The pan and tilt knobs are clearly labeled and easy to adjust,” she says. “I can make subtle adjustments in the drag as I operate, since they aren’t ‘stepped’ but smooth. Because I don’t have to slip weights in, I can tighten as I go if I need more drag.

“The pan and tilt lock levers are easy to see without looking all around the head or feeling around in the dark, which is how we often have to operate on concert work. On concerts, I often lock the tilt when I take a short break so someone can still pan the camera out of the way if necessary. With the locks visible, I can lock and unlock at a moment’s notice. I can even jump on, pan, and unlock without a ‘kick’ to the picture.

“The push-button head lock for overnight storage is a clearly marked silver button and lock pin on the right side. Being able to lock and unlock quickly and to adjust the drag easily on a head is one less thing to be concerned about when shooting a live show. Some heads have been so complicated that they are a distraction to figure out and that is the last thing I need as an operator who has to think on the fly, whether I’m shooting a live concert or this once-in-a-lifetime event.”

For this assignment, Campbell could keep her moves smooth thanks to Vinten’s Perfect Balance technology when she captured Sir Paul McCartney, Ringo Starr, Yoko Ono and Olivia Harrison as they took the stage at various points for the world premiere of Dhani Harrison and Giles Martin’s “The Beatles: Rock Band” video game for XBox. This first of its kind music-based video game will be released to the general public in September of this year.

Vinten® is a registered trademark of the Vitec Group plc

Vinten® is the global market leader in camera support technology for broadcast professionals, as well as corporate, education and government applications. The range covers manual heads, tripods and pedestals suitable for ENG, EFP, OB and studio environments. With 100 years’ experience pioneering the world’s broadcast and film industries, Vinten continues to provide the most innovative, intuitive camera support products available by working closely with today’s camera support professionals and understanding their industry needs. Along with five other leading brands in the broadcast industry, Vinten is part of Camera Dynamics Ltd, a Vitec Group company.

About The Vitec Group plc

The Vitec Group plc is acknowledged as a global leader in the supply of equipment and services to the broadcasting, entertainment and photographic industries and has established a reputation for technical excellence and superior engineering along with an astute business strategy which has seen it grow by acquisition. Innovation is a cornerstone of the Group’s activities and the organization is committed to a policy of continuous product development. With revenues (2007) of $546m (£274m) and over 2200 employees worldwide, its products are distributed in almost 100 countries, through a strong, fully-resourced distribution network or direct to the end user or corporate customer.

More information can be found at www.vitecgroup.com