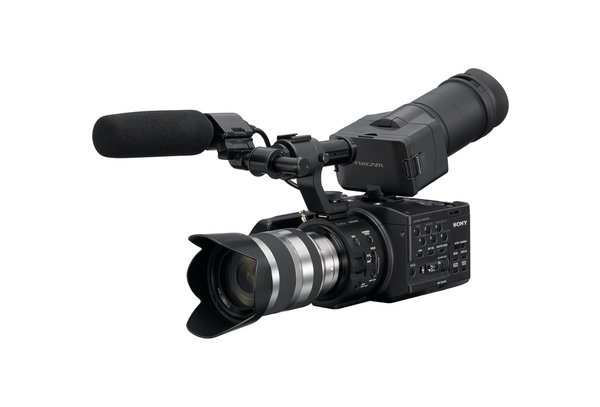 The NEX-FS100U is designed from the ground up for motion pictures.

From the moment they came out, HD-capable DSLRs have intrigued shooters with their ability to deliver Hollywood-style selective focus on a micro-budget. But even as HDSLRs have gained adherents, shooters have pointed to a list of pictorial, practical and ergonomic shortcomings. To be fair, these issues are the result of taking an excellent platform carefully optimized for still photography and adapting it for moving pictures. Sony understands. We know DSLRs, we love DSLRs, and we make a growing family of Alpha HDSLRs along with a large-sensor Handycam camcorder with still camera roots: the NEX-VG10, which uses an APS-C size image sensor. But we also wanted to create a purpose-designed professional camcorder that would combine the key benefits of HDSLRs without the limitations. The result is the NEX-FS100U.

Doing what DSLRs do

To our way of thinking, shooting motion pictures on a DSLR provides five key benefits, all of which are present in the NEX-FS100U.

Video professionals often depend on features that DSLRs lack. And there are some DSLR attributes that video shooters would rather live without.

What humongous pixels mean in practice: shooting in candlelight.

While DSLRs will continue to have their adherents, we’re convinced that the NEX-FS100U is an attractive new choice in digital motion picture cameras. From the reaction of early users, the crowds at NAB, and the Black Diamond Award from DV magazine, it appears we’re not alone in that opinion.

Doug Jensen, DP/cameraman and president of Vortex Media on the NEX-FS100U.