There is no official announcement from Canon, but in a few days the Canon EOS R full frame mirrorless will, apparently, join Nikon’s solutions, so the real battle begins. 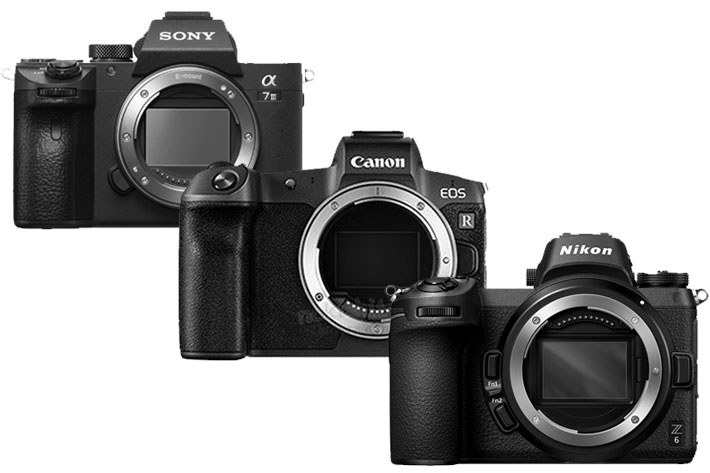 The Canon EOS R may be a modern mirrorless camera but its ethos is very much inline with the SLR ergonomics Canon introduced with the T90, from 1986, and the EOS RT, from 1989.

Photokina will be a battleground this year. We’ve still, as I write this, to hear from Sony, if the company has a new mirrorless to show, but Nikon and Canon will try to steal the show, with their new full frame mirrorless cameras. They may not be alone, as rumors suggest that even Panasonic will have a full frame camera to show soon, suggesting that the move to 35mm may be the only way for the different companies to keep in business.

Mirrorless has been a forbidden word for Nikon and Canon for a long time, despite the fact that Canon has, apparently, done rather well with its M series, in some markets. But both companies needed to show they were not living in the past, as many people suggested or wanted to believe, and Nikon confirmed recently that they had been hard at work, introducing the Z7 and Z6, poised to make Sony’s mirrorless foundation shake, no matter how much some suggest it is not true. Now, for the second round, Canon has its own mirrorless, and the first comments suggest it’s a well thought out solution. 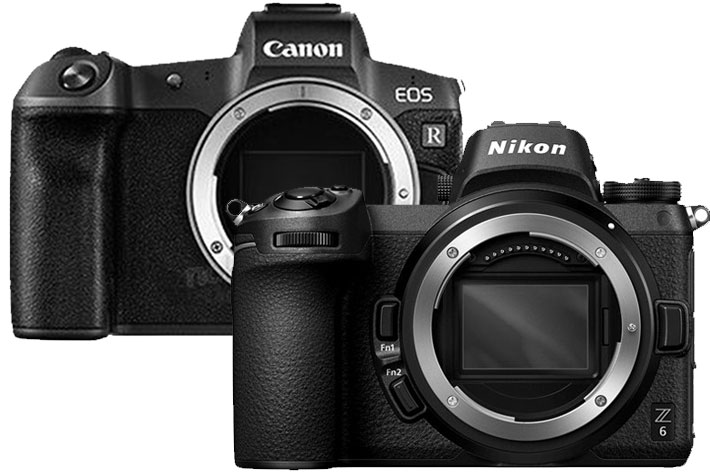 Mirrorless or DSLR: choices for Nikon and Canon users

The notion one gets looking at what Nikon and Canon have to show is that both companies managed to create mirrorless cameras that work as a bridge between the two different worlds: DSLRs and Mirrorless. Because they’ve a lot to lose if they break the link to DSLRs, they have made every effort to keep the new system compatible with the treasure trove represented by the lenses from each company. What this means is that whoever picks a Canon or Nikon mirrorless will not only have a few new lenses to start with, but can use the old lenses, dozens, with the new cameras. I believe Canon will, as Nikon did, promote the idea that there is no frontier or effective difference: you can simply go from your DSLR to your Mirrorless, and the feeling is essentially the same. Something Sony can not say, as the company dropped DSLR’s years ago.

If all the rumors published by Canon Rumors or Canon Watch, to mention a few, and initially published by Nokishita, are true – and there is no reason to doubt it – Canon has a EOS R mirrorless to announce September 5. The specifications are as follows:

The camera is announced with a series of lenses that, apparently, will be available at launch:

It’s a good start if Canon has the above four lenses at launch, along with a kit including a Canon EOS R with a 24-105mm zoom. As for other lenses, the adapters mentioned will assure that the system can, from day one, use the EF lenses, certainly an important aspect for actual Canon users. It will be interesting to see what Canon reveals as a roadmap for the Canon EOS R mirrorless system. Two notes here: the RF-mount lenses seem to have an extra ring, and the recent info indicates that the lens mount adapters will be for EF and EF-S lenses, meaning EF-M are not compatible.

What’s next for Olympus, Fujifilm and Panasonic?

There is still a lot of information missing to completely understand what Canon plans to do, but if the EOS R offers 4K video with Dual Pixel AF, and the usual touch-screen functions, it’s certainly a first for Canon and a sign of things to come. Images available suggest microphone and headphones jacks, all good points for videographers. All this information should be taken with a grain of salt, though, as the exact specifications may differ. Canon has kept this under wraps, and although there is a professional product to be introduced this month, on the 12th, there is nothing in my radar about the EOS R.

Canon’s arrival to the world of mirrorless systems, following Nikon recent entrance, changes drastically Sony’s position in the segment,  but it also creates a new headache for brands as Olympus, Fujifilm or Panasonic, as these companies do not offer full frame mirrorless systems as we’re seeing from Canon, Nikon and Sony (although Panasonic may have a surprise…). With some of these full frame mirrorless systems available under the $2000 price tag, smaller sensors as Micro Four Thirds and even APS-C may have an uncertain future. Or maybe not! One thing is sure: the coming months will be interesting, and it will all start at Photokina, which suddenly gains some of the importance it has lost in recent years.

Now that I’ve shared the rumors, adding what I see in my crystal ball, it’s time to look at something else: Canon’s passion for the “R” letter, which in fact was what first made me want to write these notes. The new mount is Canon’s return, 60 years later, to its origins (Roots?), as the first lens mount the company introduced, in March 1959, for Canon’s first single lens reflex camera, the Canonflex, was named R mount. The R mount was discontinued in 1964 and replaced with the Canon FL lens mount, which was replaced in 1971 by the FD lens mount.

Canon also used the “R” in their EOS RT, launched in October 1989, the first autofocus SLR camera that used a fixed pellicle mirror and in doing so drastically shortened the shutter-release time lag. The camera was developed for professional photographers, and the “RT” stood for “Real-Time”. Because of the elimination of the movement of the reflex mirror, the whole picture taking process is much faster and the viewfinder never blocks out. The concept was used in the Canon EOS-1n RS introduced in 1995, but its origins go back to 1965, when Canon introduced the system in the Canon Pellix.

Canon used the fixed pellicle mirror in professional cameras as the F-1 High Speed Motor Camera, produced for the 1972 Olympic Games at Sapporo, and in the Canon New F-1 High Speed Motor Drive camera for the 1984 Olympic games in Los Angeles. The technology was reintroduced – as revolutionary – by Sony in 2006, under the designation Single-Lens Translucent (SLT) in their Sony Alpha SLT cameras, when the company stopped producing DSLRs. 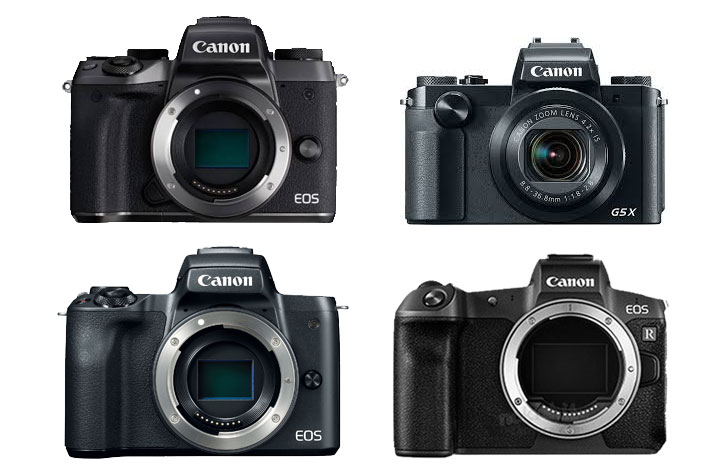 So, this settles the “R” part of this story. But something else caught my eye while looking at the images of the coming mirrorless EOS R: the ergonomy. It somehow leaves aside some of the roundness of actual models, and takes us back to another EOS: again the EOS RT. The experiences made by Canon in the “ugly” compact models Canon G1X and G5 X and the mirrorless EOS M series M-5 and M-50 have contributed to the EOS R model, but there are signs of what I would call the “Canon ethos”, which can be traced to previous models, including the T90, which offers a design that breaks with previous Canon SLRs and hints to what the EOS system, that Canon introduced in 1987, would offer. 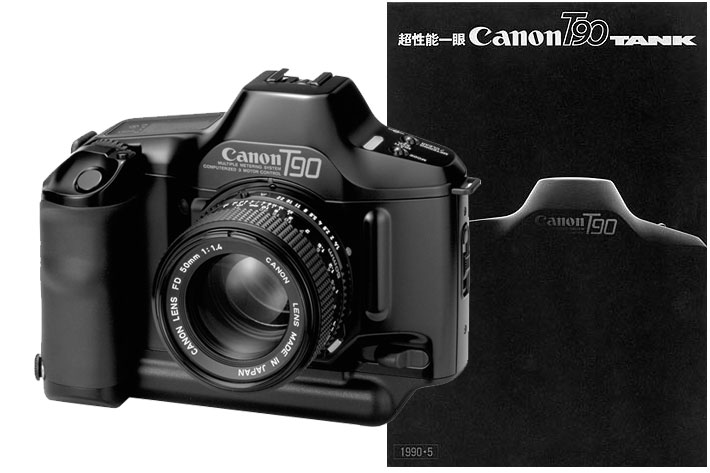 Nicknamed the Tank, in Japan, the T90, launched in February 1986, was the top-of-the-line T-series model and the last professional camera using the FD lens mount, as one year later Canon introduced its bayonet-style EF lens mount, with the EOS 650 SLR, completely breaking compatibility with the earlier FD mount. The larger diameter of the EF mount paved the way to the future, and is still being used today, allowing, apparently to extend compatibility with the new R mount. But that’s something you can read in more detail if you check my article about Nikon’s mirrorless and Canon’s silence. 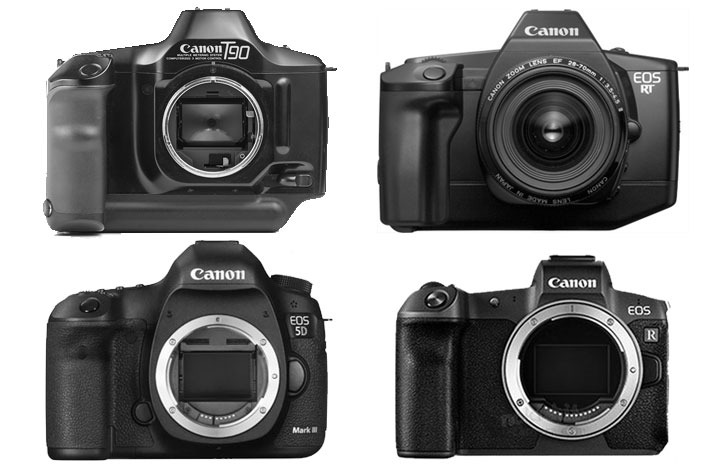 The mirrorless Canon EOS R seems to inherit some of the design features of both the T90 and the EOS RT, as if Canon wanted to have as the opening act of its new type of camera and generation traces of its past glories, with an hint of the original R-mount on the name of the new system. We’ve yet to discover what the “R” stands for, but it may be just an indication of the “Real-Time” view that this model offers, as there is no blackout of the viewfinder in a mirrorless. Or maybe the “R” stands for … revenge! Or Respect!