Nikon finally shows its first REAL mirrorless cameras, and one could say it is a nice pair: the Z 7 has 45.7 effective megapixels and the Z6 has 24.5 MP, in full frame bodies offering 4K UHD video. 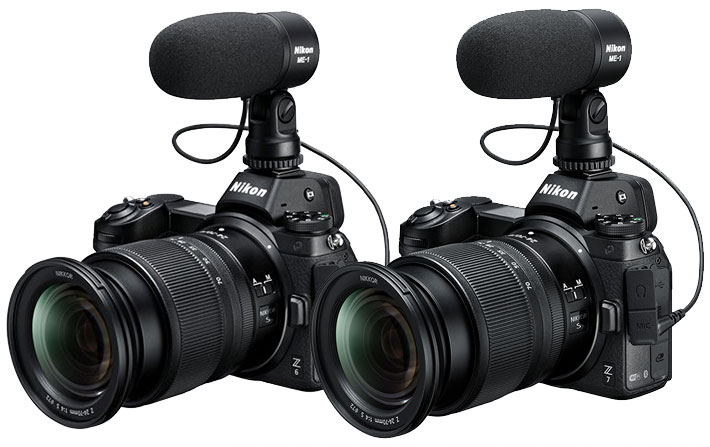 The new Nikon mirrorless cameras, Z7 and Z6, will be available in September and November, and there is a full roadmap of 12 lenses for the system, including the classic 70-200 f/2.8 zoom professionals crave.

Confirming some of the rumors and denying others, the first DSLR-like looking mirrorless cameras from Nikon suggest the company is ready to take video to a whole new level, offering those interested in moving images a solution that will keep them with the brand. Add to that compatibility with F-mount lenses, through an adapter, and three new lenses at launch, and Nikon is off to a good start.

There’s so much to digest now, with all the information made available today, that I decided to take things in a different direction, and look at the video features of the new cameras, complementing that information with a look at the lenses which will be available, one key element for Nikon to triumph in a battle that is now starting: Sony was all alone until now. Nikon just entered, and Canon will come next. But for now, it’s Nikon’s time to start its next century of innovation with what I would call a nice pair. A small package for big things, as Nikon puts it. 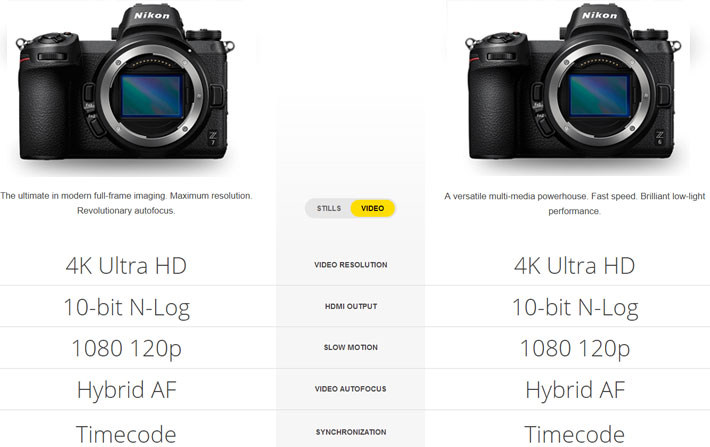 For filmmakers, the good news is that the Z 7 and Z 6 support recording of not only full-frame 4K UHD (3840 × 2160)/30p movies using the FX-based video format, but also Full-HD/120p movies. Nikon says that Sharper 4K UHD movies are made possible, using the full-pixel readout and indicates that Active D-Lighting, electronic vibration reduction, and focus peaking can be used with 4K UHD and Full-HD movie recording. This will set the tune to which Canon will have to sing, with its mirrorless…

Nikon’s original N-Log color profile can be used with 10-bit HDMI output, but users should be aware that simultaneous recording of 4K UHD movies with 10-bit output to the camera’s memory card is not possible. The N-Log setting, according to Nikon, “utilizes extensive color depth and twelve-stop, 1,300% dynamic range to record a wealth of tone information from highlights and shadows for more effective color grading. Timecode support makes synchronizing video and sound from multiple devices easier.” 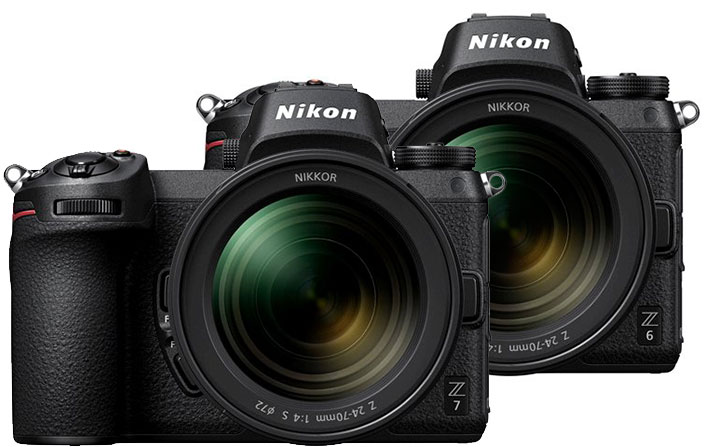 One feature that will be appreciated by both videographers and photographers is the control ring built into NIKKOR Z lenses, which can be used to quietly and smoothly adjust settings such as aperture and exposure compensation. That’s good news and a nice way to introduce the lenses, which are essential elements for Nikon’s new system to attract attention. When the Nikon Z7 launches, September 27, there will be two lenses available: the NIKKOR Z 24-70mm f/4 S and NIKKOR Z 35mm f/1.8 S,with the suggested retail prices (SRP) of $999.95 and $849.95, respectively. The third lens, NIKKOR Z 50mm f/1.8 S lens will be available in late October for the SRP of $599.95.

The Mount Adapter FTZ is an essential piece of Nikon’s strategy, and from the information available it seems the company has invested in the development of an adapter that offers as much as technically is possible, to explore the wide range of Nikon lenses already available. Nikon indicates that the adapter offers full compatibility with more than 90 lenses and functionality with approximately 360 existing NIKKOR F lenses from AI type onwards. Here are some of the key features of the Mount Adapter FTZ: 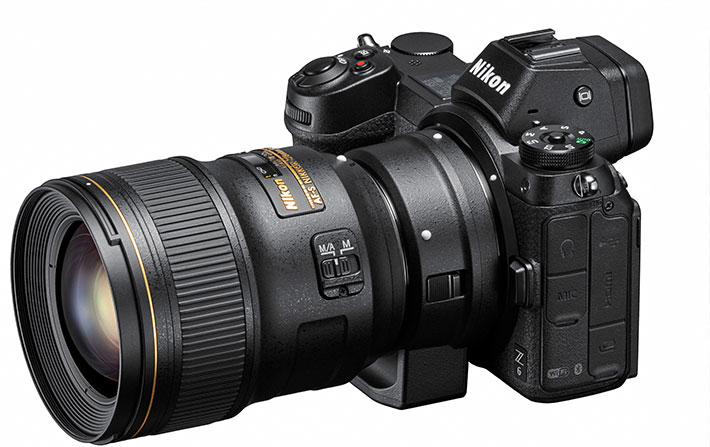 It’s interesting to see Nikon following Canon in terms of the diameter of the lens mount, albeit 31 years after. In fact, Nikon has taken it further by 1mm, as the new mount has 55mm, and Canon’s EF mount is 54mm. Nikon F-mount is 44mm. With this huge jump – as I suggested in my previous article – Nikon is in pursue of a new dimension in optical performance, by, and let me use their own words, “taking advantage of the superior design flexibility made possible by the combination of the larger Z mount with its inner diameter of 55mm, and a short flange focal distance of 16mm.”

The innovation allowed by this change will, again, benefit videographers and photographers. It translates in lenses that offer sharp resolution with both still-image and video recording, and are equipped with functions that include: compensation for focus breathing (the shifting of the angle of view when focus is adjusted), quiet operation, smooth exposure control, a control ring and performance that is well suited for video capture. 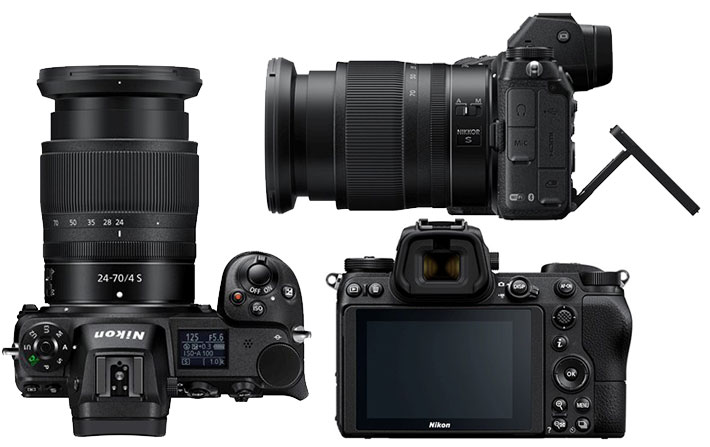 The large diameter allows Nikon to announce the development of a NIKKOR Z 58mm f/0.95 S Noct, a standard prime manual focus lens and the fastest lens in Nikon’s history. This lens looks like a late reply to Canon, who in 1989 was the first to create an f/1.0 lens with the Canon EF 50mm f/1.0L USM, for the larger EF mount introduced two years earlier.

The design of the Noct lens exemplifies Nikon’s mission to pursue the ultimate optical performance in the mirrorless category and, adds the company,”as the result, the Noct is positioned at the top of the S-Line. The S-Line is a newly designated grade of NIKKOR Z lenses that adhere to a new benchmark in optical performance, realizing rendering performance that surpasses that of conventional f/4 standard zoom lenses and f/1.8 wide-angle or standard prime lenses. From maximum aperture, clear and sharp resolution can be achieved as well as beautiful bokeh characteristics. 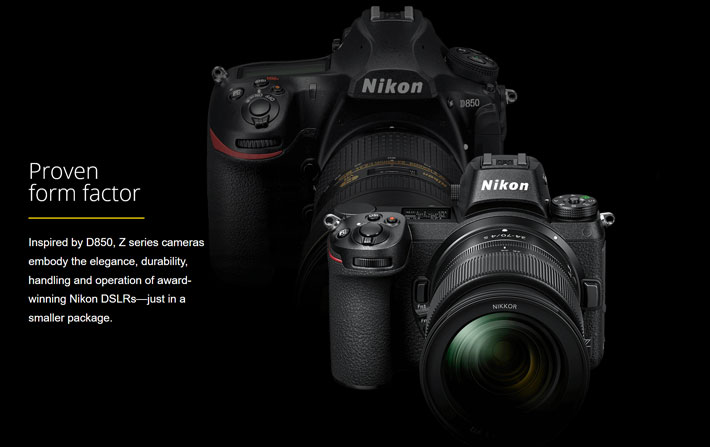 The roadmap for the S-Line indicates that Nikon is planning on releasing a variety of new lenses that will continue to expand its line of attractive, high-performance NIKKOR Z lenses that further extend photographers’ creative expressions. The system has been realized through the pursuit of a new dimension in optical performance, says Nikon, and “it has inherited Nikon’s tradition of quality, superior imaging technology, intuitive operability and high reliability, all innovated from its digital SLR cameras.” 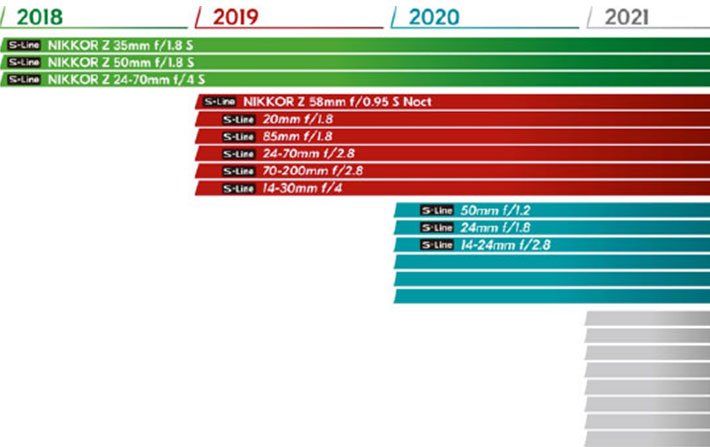 The letter “Z” represents the culmination of Nikon’s relentless pursuit of ultimate optical performance, and a bridge to a new chapter, now that the company enters its second century. It is about redefining possibilities to provide image makers with tools to pursue greater creativity. Lighter than comparable DSLR camera bodies with a thinner, more compact footprint, the final size is a surprise to all that tried to measure the camera from the initial images, and compare it to the D850. Following the DSLR form factor, the Z is designed to be a mirrorless that feels like a Nikon.

Nikon will expand the value of mirrorless cameras through the pursuit of a new dimension in optical performance, and by upholding Nikon’s tradition of quality while responding to the evolution of imaging technology. By providing image makers with stimulating new products, Nikon will continue to lead imaging culture.