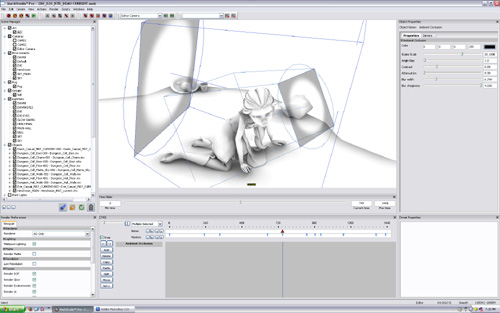 StudioGPU is showcasing at SIGGRAPH 2009 the powerful next-generation features and performance benefits of MachStudio™ Pro on the all new, industry-leading AMD ATI FirePro™ V8750 3D workstation graphics accelerator. MachStudio Pro provides a seamless way to create and interact with cinematic 3D objects and environments in a non-linear workspace, leveraging the horsepower of off-the-shelf professional graphics processing units (GPUs) to deliver real-time and near real-time workflow performance on a desktop workstation.

The MachStudio Pro workflow is akin to a virtual 3D real-time studio environment, allowing artists, designers, engineers, directors, and technical directors (TDs) to work with lighting, camera views and multi-point perspectives for a real-time view of frames as they will appear in the final rendered format. Users can easily manage and interact with complex lighting, caustics, cameras, shaders, materials, ambient occlusion, and color grading for real-time shot finaling and compositing.

Visit StudioGPU in the AMD booth (#2417), at SIGGRAPH 2009 in New Orleans, August 4-6 to see the next-generation MachStudio Pro features, including:

– Custom Configurable Anti-Aliasing: Choose from a variety of anti-aliasing algorithms to achieve the highest quality results for the desired look and feel.

“The powerful new features of MachStudio Pro 1.2 take full advantage of the recently announced ultra high-end AMD ATI FirePro V8750 3D workstation graphics accelerator, allowing users to streamline 3D creation workflow in ways that, until now, were seemingly impossible,” said David Koenig, president and CEO, StudioGPU. “By tapping into the ATI hardware-based geometry tessellation library, we can deliver unbelievable quality with lightning-fast rendering performance. This is only one example of many features, once exclusive to only the biggest budget productions that we have opened up to creative 3D professionals everywhere.”

“Pairing Real-Time Performance with Cinematic-Quality Rendering Empowers CG Artists Everywhere to Work at the Speed of Thought,” an industry white paper by Alex Herrera, senior analyst with Jon Peddie Research and author of the JPR Workstation Report series, provides detailed information about the many benefits of MachStudio Pro, including how it leverages the GPU for real-time 3D workflow and rendering. Download the white paper at www.studiogpu.com/whitepaper.