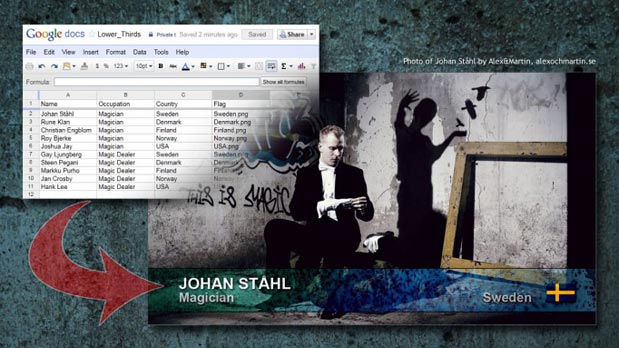 Jarle Leirpoll is offering a free sample chapter from his book The Cool Stuff in Premiere Pro. In Spreadsheets to Lower Thirds, Jarle shows “how to take a list of people’s names, occupation, nationality etc. from a spreadsheet and automatically make Photoshop output one lower third per person… No more copy and paste to make lower thirds. No more re-writing the names, and of course, every single lower third has the correct lay-out and style.”

◊ For more on lower thirds and creating them in mass, see also the mini-roundup Free Lower Thirds plus Additional Resources: Leverage Photoshop, Premiere, and After Effects, right here on PVC.

The most relevant resources might be: Spreadsheets to Lower Thirds in Premiere from Eric Addison, Expression Shorts – Read External Text Document (video on creating AE Text Layer source text from an external document) by David Torno, and the Style4type blog for inspiration and whatnot.

Update: in October 2014, Mamoworld released a new After Effects workflow tool, Text2Spreadsheet. There’s a longer tutorial in addition to this teaser:

Mamoworld even added some advice for choosing the appropriate script for your job:

Is Text2Spreadsheet the right tool for me?

There exist several spreadsheet solutions for After Effects. Text2Spreadsheet is your best choice if you only want to modify texts and if the spreadsheet should be so easy to read and modify that you can send it to a client or translator.

CompsFromSpreadsheet can do more complex changes of the project like replacing footage files, but you have to manually mark each layer that should occur in the spreadsheet.

Templater is like a Deluxe version of CompsFromSpreadsheet that supports, for example, intelligent layout. It is very powerful when you want to render many variants of a project, but if you want to quickly export all texts of your project, you would first need to apply a specific effect to each single one of them.

Open Sesame exports and imports entire projects to a spreadsheet. Similar to Text2Spreadsheet you don’t need to mark each element manually that should show up in the spreadsheet, but you have some control which parts should be exported. In contrast to Text2Spreadsheet, even if you decide to only export the texts, the generated spreadsheets are more complex, containing comp IDs, layer IDs and various extra data. If you accidentally edit any of these, you can easily break something. Also, you cannot change the AE project and the spreadsheet in parallel. Once you insert, delete or move layers, for example, the data from the spreadsheet cannot be applied to the project anymore. Also Open Sesame doesn’t give the detailed status information that Text2Spreadsheet provides such that it is more difficult to figure out what actually changed after you reimport a spreadsheet to your project.
The power of Open Sesame is that it can export way more than just text. If you need access to any single keyframe of your project, Open Sesame is your tool of choice.