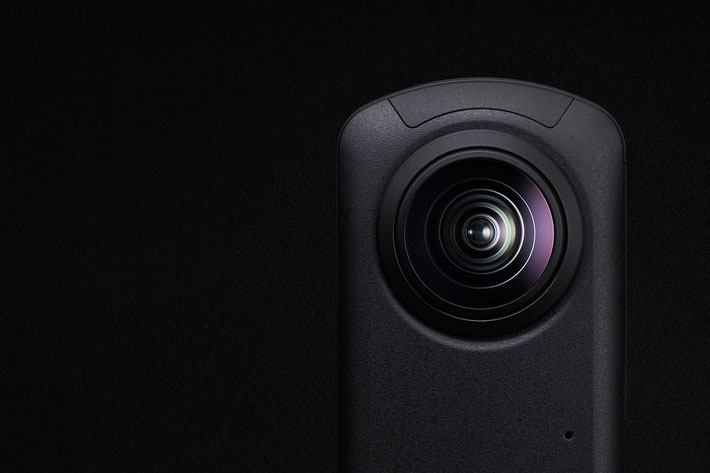 The fifth camera in the series, the Ricoh THETA Z1 joins a family that includes the advanced model,  in grey, Theta V, the THETA SC, a standard model with a selection of 4 colors, the Theta S, similar but in a black body, and the THETA m15, the original model, also available in 4 colors, and the camera that started it all, back in 2013. It was then that Ricoh launched the “world’s first 360-degree consumer camera” a mass-produced consumer product capable of capturing the scene around, above and below the device in a fully spherical image (as of October, 2013, based on Ricoh research).

Since then the company has develop new models, with better specifications, and the THETA Z1 represents the new top of the line, featuring a compact main body equipped with a 1.0-inch back-illuminated CMOS image sensor, one of the largest for consumer 360-degree cameras, enabling approx. 23MP resolution 360-degree still images. 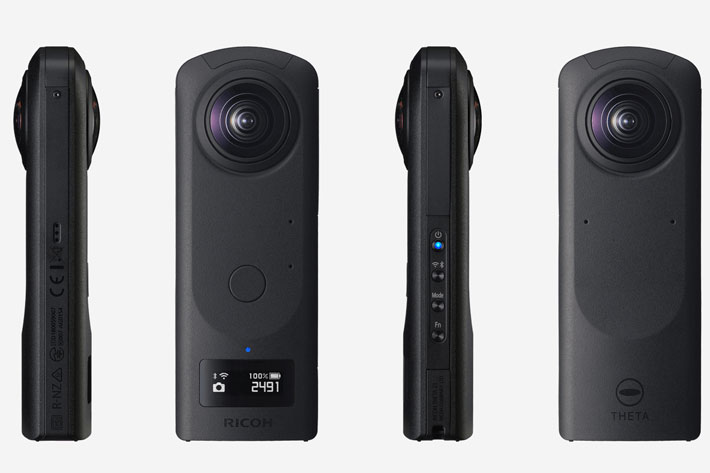 The camera’s sensor supports the best of ISO6400 high-sensitivity shots, showing, claims Ricoh, “its strength in night and dark indoor shots”. The lens unit uses Ricoh’s original tri-fold structure technology, allowing for a slim body of just 24mm despite the large image sensor. A multi-level aperture mechanism is newly equipped, allowing users to set the F-number to one of the three levels of F2.1, F3.5, and F5.6.  In places where the camera can take in a lot of light, by closing down the aperture, the resolution of surrounding areas increases. Moreover, the newly designed lens unit keeps ghosts, flares, and purple fringing down, says Ricoh.

Following on from the Ricoh THETA V, the camera uses Qualcomm’s Snapdragon and an Android-based operating system. According to Ricoh, firmware updates facilitate continuous functional expansions and performance improvements. Furthermore, users can access a variety of expanded functions by installing various plug-ins. Besides Ricoh genuine plug-ins, an environment was built for adding and using plug-ins releases by general developers through the Ricoh THETA Plug-in Partner Program. 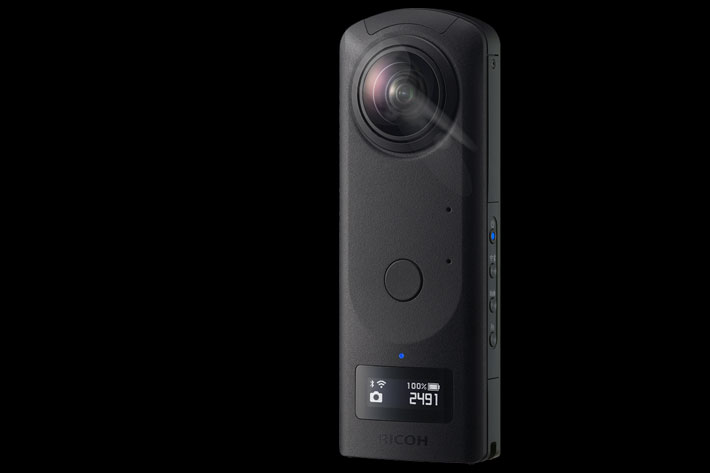 The THETA Z1 features a new image processing algorithm, to get low- and high-sensitivity, low-noise, and high-resolution images. Moreover, Dynamic Range (DR) compensation is automatically made for normal shooting, effectively reducing blown out and pitch-black shadows for outdoor locations with brightness contrasts, according to Ricoh data. The camera offers a range of shooting modes, including HDR Rendering, Interval Composite shooting that can be used to record star trails, and Multi-bracket shooting that can take continuous shots with up to 19 settings. 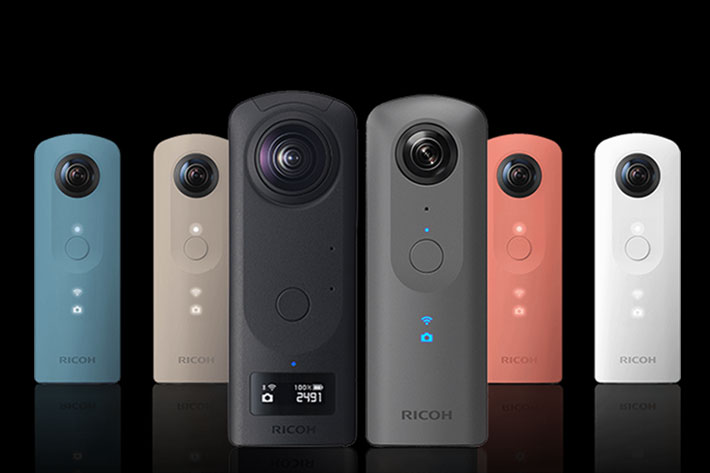 Spherical images need sound that works with them, and the THETA Z1 has a 4-channel microphone that supports 360-degree spatial audio recording built into its body. Recording omnidirectional audio including both horizontal and vertical directions makes it possible to reproduce sound and video as it was in the environment where the video was shot by linking 360-degree video and audio together. This delivers the enjoyment of creating immersive VR video content and watching videos on large monitors more realistically.

Support for RAW (through Adobe DNG) is included, besides the existing JPEG format. Ricoh THETA Stitcher, an application for stitching in Adobe Photoshop Lightroom Classic CC, is provided free.  Ricoh indicates that “after processing files recorded as RAW, the plug-in can be used to generate spherical images in which the seams are invisible. Details about zenith corrections, directional corrections, and stitch distance setting can be freely changed. As with a general SLR camera, users can enjoy professional editing of hues and image quality.” 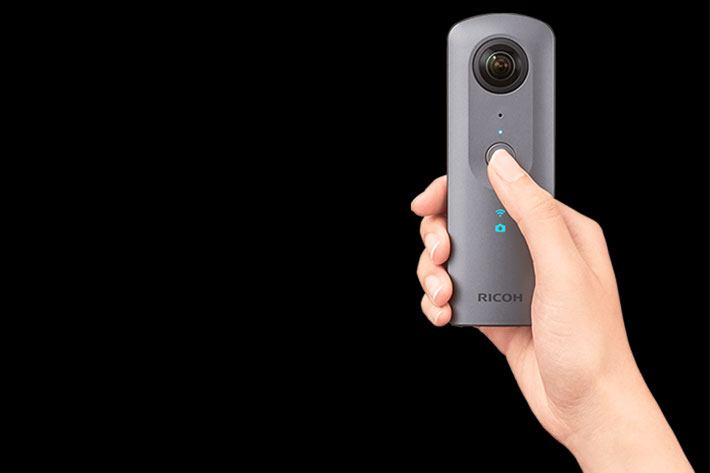 To control all the functions, the camera has a 0.93-inch organic EL (OLED) monitor that displays shooting information in the lower part of the main body. With nothing but the camera itself, shooting information can be checked at a glance, including remaining battery, shooting mode, the number of possible shots, F-number, and ISO sensitivity. The new function (Fn) button can be used to switch what is displayed on the organic EL monitor, switch between normal shooting and self-timer shooting, switching between three plug-ins, and switching light out and silent mode.

Ricoh states that the camera is “able to support 360° live streaming in 4K. Transmits excellent quality real-looking image to the world”. Users can directly post 360-degree spherical images shot using the camera to Facebook or upload them to the theta360.com dedicated website and share them on social networks such as Twitter and Tumblr. Unique cropped images can also be shared with Instagram. It is also possible to submit captured spherical videos to YouTubeTM 360-degree channel and images to Google Maps. 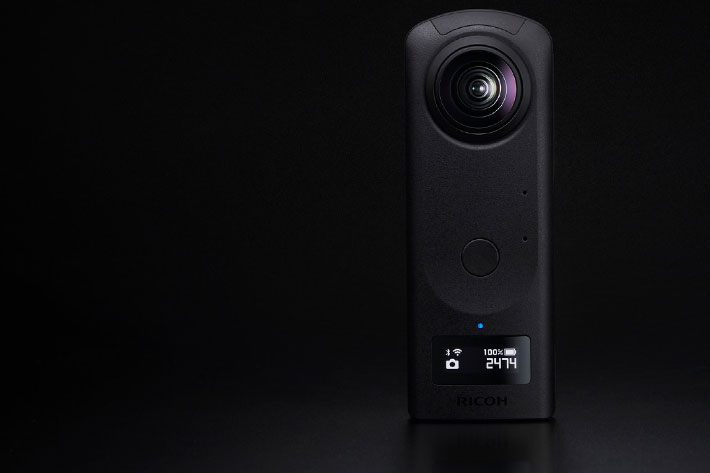 “Remote Playback” for 360-degree video is installed as a plug-in. Using a general-purpose receiver equipment such as a compatible wireless display adapters it is possible to mirror playback of 360-degree still images and video data stored on the camera. This allows, adds Ricoh, users to enjoy powerful 360-degree video on large displays or over projectors by operating the camera.

The camera employs a lightweight and robust magnesium alloy for the body materials. Metal tripod screw holes are set in anticipation of use in harsh environments. Moreover, the external connector uses the next-generation standard of USB 3.0 (Type-C) to allow for even smoother transfer speeds. The shape is top–down symmetrical, so it can be inserted either way.