Creating a list of best drones in 2019 was a simple task, as one name was dominant: DJI. Things are changing in 2020, and this guide on camera drones reflects those changes. 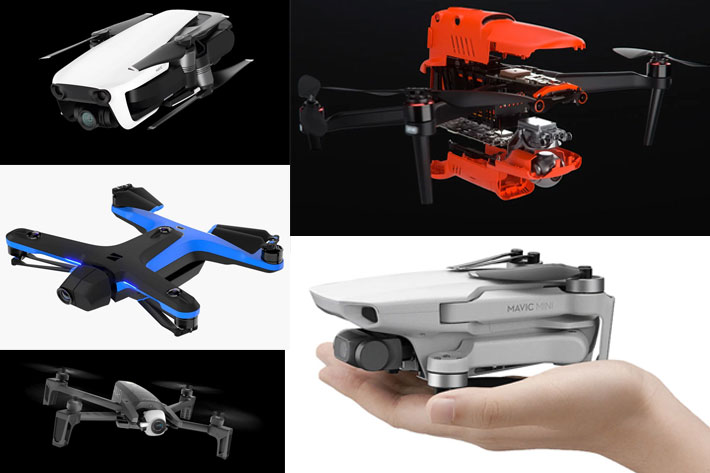 DJI is the most popular name when you think of drones for image capture, but Parrot is still around, and new drones, announced at CES 2020, may well change the landscape in the coming months.

Drones are no longer the exciting new tool that every photographer and videographer wanted to have in their tool kit. Now, after the initial boom, many have sold their drones, either because the initial excitement with the new toy and tool is gone, or/and because of the legislation that, as expected, tries to tame the “Wild West” the whole drone adventure was, for a while.

Drones are not dead, though, and one just has to look at events like the recent CES 2020 to understand that drones not only continue to appear, offering some of the most exciting solution for aerial photography and videography, but are also the subject of professional panels where the them is discussed. At CES 2020, three different panels reflected on the professional use of drones around the world, and one of the conferences, under the title Drones: More Than Just Aerial Footage, looked at how the continued use of drones changed the landscape in the imaging industry. 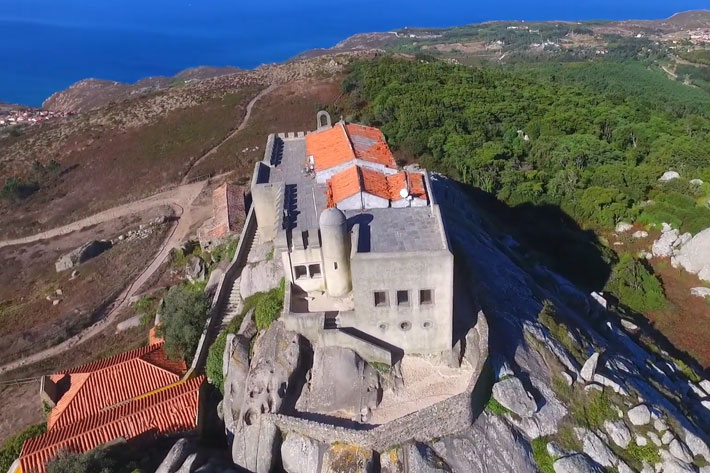 A drone conference at CES 2020

With Doug Johnson, Vice President, Technology Policy, from the Consumer Technology Association as moderator, and the presence of  Alicia Leahy, Vice President, Government Affairs, from Motion Picture Association and Katie O’Leary Sr. Product Marketing Manager, DroneDeploy, the conference had two drone pilots talking about their experience: Rebecca Kesten and Skip Fredricks, both sharing their views on very specific areas where drones are used.

Rebecca Kesten is a drone pilot with the Fox Flight Team and a coordinating producer with FOX News Channel’s Investigative Unit, based in New York. She has been an FAA Part 107 certified drone pilot since 2017, flying for news assignments across the country. She has also piloted drones for a series on national infrastructure, over Hyperloop technology in Nevada, for a variety of presidential town hall venues and outside of Acadia National Park in Maine. Kesten now serves on the Fox Flight Desk, reviewing and approving newsgathering drone flights nationwide. Since joining FOX News in 2010, she has witnessed first-hand how drone footage has become a crucial storytelling tool for long-form narrative, political special events and breaking news. Kesten received her M.A. from the University of Miami in Broadcast Journalism.

Skip Fredricks, is a drone pilot and cinematographer with two Emmy Nominations in addition to 40 Industry Awards for Cinematography. Executive Producer for 10 TV Properties on FOX Sports Net, USA, SpikeTV and HBO, he has provided action sequence content for the Sopranos, Universal Pictures and Paramount Pictures. Creative Consultant for Adobe, Apple and Youtube, Skip Fredricks was the first to use DJI drones in SciFi Made For TV Film.  A FAA Part 107 remote pilot, he is also a drone flight instructor for the Unmanned Vehicle University and Drone Flight Instructor Specialist for the LATTC (Los Angeles Trade Tech College) and Grossmont College in San Diego. 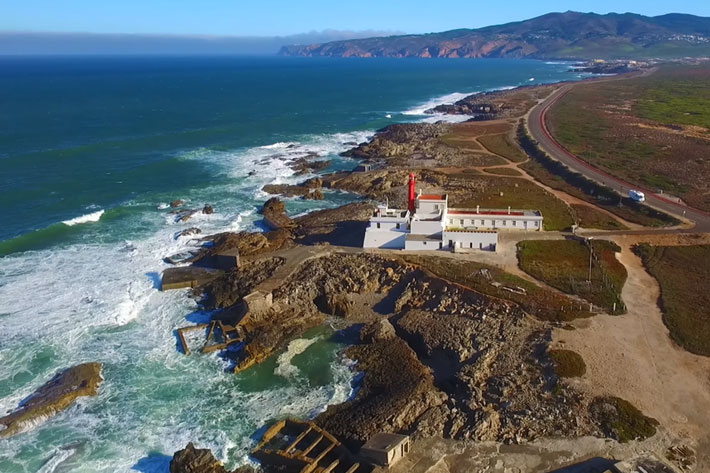 The conference at CES 2020 reflected on what the future will bring, starting with a series of questions: now that audiences are used to jaw-dropping aerial shots, how are TV and film businesses working drones into their productions? How is aerial imaging in general transforming the business landscape? And most important, what do audiences and customers want?

Well, the most recent drones are a good indication of what consumers, and in this case I mean professional users, want.  That’s where DJI popularity enters: the company has created solutions to cater for the needs of most photographers and videographers, and the features of its drones together with the reliability have created the conditions for the company to fill most places in any “top-ten” of drones for video and photography, leaving little space for other names. 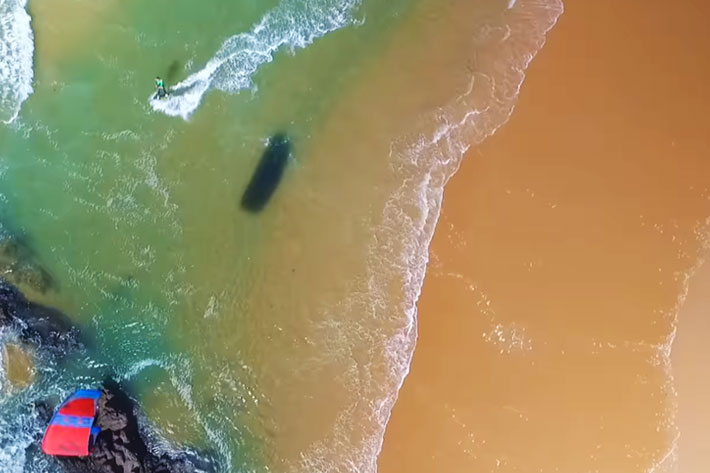 In fact, any list created for 2019 would have DJI practically alone filling most places, but things may be changing for 2020, with three more names to consider: Parrot, Skydio and Autel Robotics. These are the top contenders for a place in any list of “best”, along with DJI. There are other names and options, as Yuneec, but they seem to have lost the initial elan, although some of the solutions offered continue to attract attention. For this guide I centered on camera drones offering 4K, but also include the Mavic Mini, because there continues to be people who, for a variety of reasons, pick one resolution over the other: size and portability are, in my opinion, good reasons. The list does not reflect a “best to worst” sequence, using price and resolution as the guides to the order chosen. 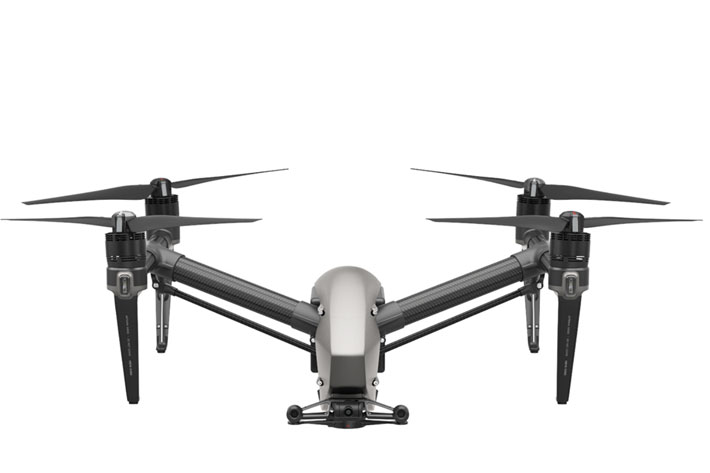 A critical tool for filmmakers around the globe, the Inspire 2 takes everything that was good about the Inspire 1 and improves it. The image processing system CineCore2.0 has been upgraded to CineCore2.1, recording video at up to 6K in CinemaDNG/RAW and 5.2K in Apple ProRes when used with Zenmuse X7 camera. It goes from 0 to 50 mph (80 kph) in just 5 seconds and hits a maximum speed of 58 mph (94 kph) and has a max descent speed of 9m/s for unheard of speed and agility in an aircraft this size. 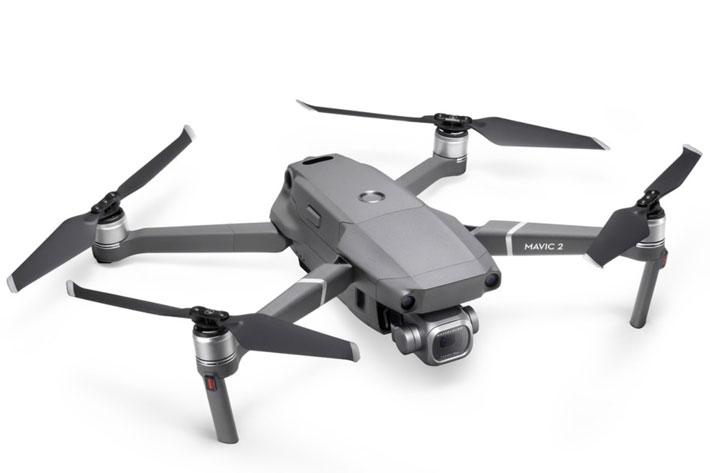 Launched in 2018, the DJI Mavic 2 Pro improves over the original, offering a better – 20MP – camera,  longer flight time, more advanced safety features, in a foldable and compact size that hides a high degree of complexity, making it one of DJI’s most sophisticated flying cameras ever. Co-engineered in partnership with Hasselblad after two years of research, the Mavic 2 Pro comes equipped with the, at the time, all-new Hasselblad L1D-20c camera, which possesses the unique Hasselblad Natural Colour Solution (HNCS) technology, helping users to capture gorgeous 20-megapixel aerial shots in stunning color detail, through the 1” CMOS.

An alternative is the Mavic 2 Zoom, powered by a 1/2.3-inch 12-megapixel sensor with up to 4x zoom, including a 2x optical zoom (24–48 mm). The Mavic 2 Zoom is all about dynamic perspectives, making it ideal for cinematographers. Capture everything from wide angle to mid-range shots for even more creative options. 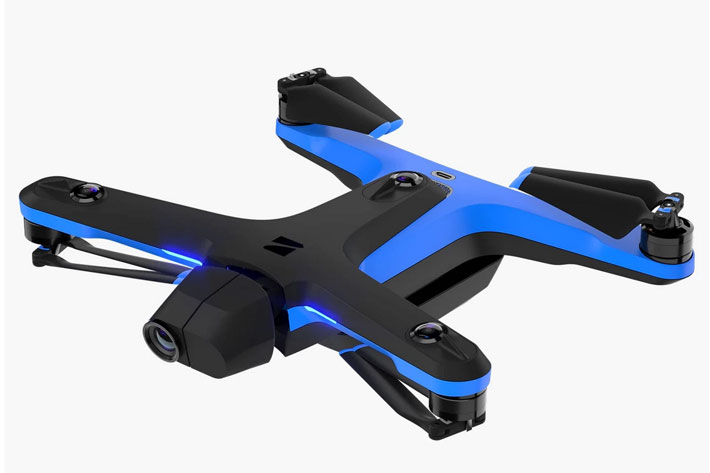 Skydio 2 –  A drone made in America

The company behind the Skydio 2 calls it “the most advanced flying AI on the planet” and the numbers do suggest the new drone from the US company may well be a step forward. With six 4K navigation cameras, the Skydio 2 can see everything in every direction to guarantee trustworthy autonomous flight.

The Skydio 2 features, says the company, “an all-new, best-in-class camera, meticulously perfected around Sony’s IMX577 sensor and the Qualcomm RedDragon QCS605, capable of 4K video up to 60fps with HDR” which also offers a dedicated photo mode for capturing 12MP HDR photos for a variety of shooting options, including single, interval and more. The drone represents an evolution over the original R1, from 2018, considered a breakthrough in autonomous drones for consumers and a platform for commercial development. Skydio creators met as grad students at MIT in 2009, where they pioneered autonomous drone technology, and in 2014 founded the company. 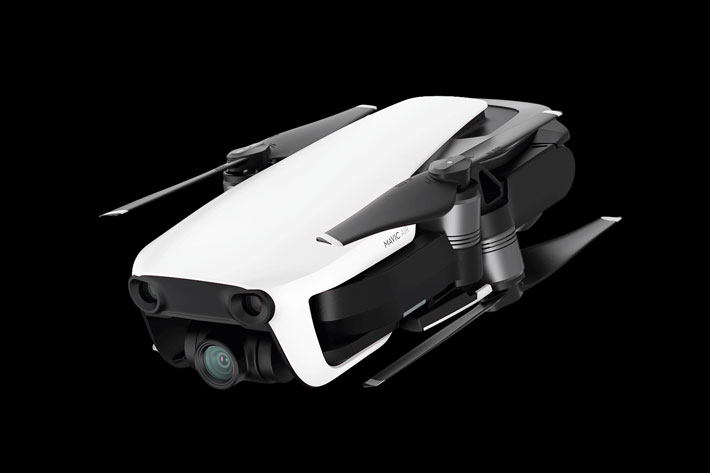 As tall and wide as a smartphone when folded, the Mavic Air is an ultraportable drone that stretches the boundaries of what’s possible for a device its size. Inheriting the best of the Mavic series, this portable and foldable drone was built to go wherever adventure takes you. The Mavic Air shoots video at 4K 30 fps, recording at 100 Mbps to capture every second with UHD quality, and has support for recording 1080p 120 fps slow-motion video, to capture high-speed adventures and reveal all the detail of the action.

The Mavic Air’s onboard camera integrates a 1/2.3” 12-megapixel CMOS sensor and an f/2.8 lens with a 35-mm equivalent focal length of 24 mm. The dedicated remote controller uses a foldable, low-profile, ergonomic design to hold your smartphone for maximum convenience. Detachable control sticks store inside the remote controller to pack more comfortably on the go. 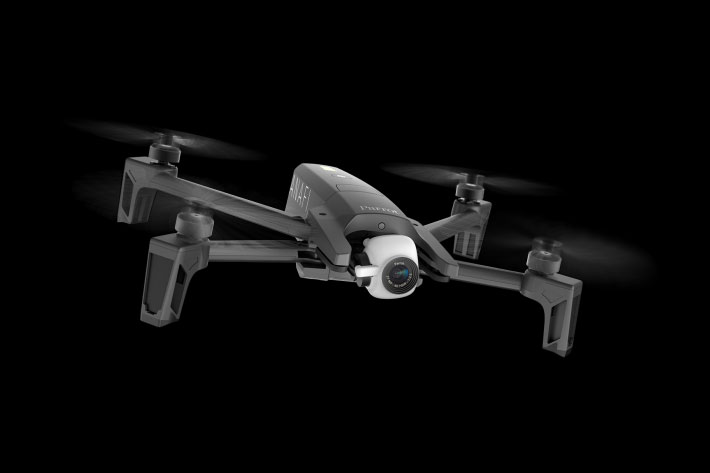 Cheaper than the Mavic Air, this is the first non DJI entry in the list. The Parrot Anafi may not have obstacle avoidance ands other features present in DJI drones, but if you can live with that, this flying 4K HDR camera is a foldable drone that you can take with you everywhere on the go. Thanks to its unique 180° tilt gimbal and up to 2.8X lossless zoom, it can make the most of a camera/sensor, offering everything to capture 4K HDR videos with 100Mbps bitrate and sharp 21MP photos.

The Parrot Anafi features 4K UHD at up to 30fps, but also offers 4K Cinema – 4096×2160 24fps – that provides professional quality videos in the 17:9 video format. Thanks to ANAFI’s embedded Artificial Intelligence,  users can take advantage of the drone’s automated flight modes to capture spectacular shots. The carbon fibers of the structure are charged with empty glass microbeads that are filled with air and resist bumps and knocks. Due to this innovative material the drone weighs a mere 320g. There is a new version, Anafi FPV, using the same base. 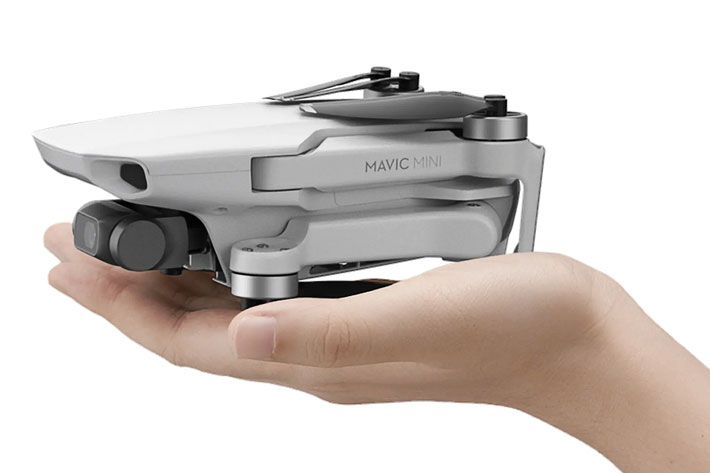 DJI Mavic Mini – For when you don’t need 4K videos

If you don’t need 4K, then the Mavic Mini may be your best bet in terms of portability. Able to shoot 2.7K Quad HD videos (that’s a resolution of  2720x 1530) the Mavic Mini also supports 12MP aerial photos. A 3-axis motorized gimbal provides superior camera stability and ensures clear, ultra-smooth footage, and the drone includes QuickShot modes, which include Dronie, Circle, Helix, and Rocket, for shots that look like they came from a Hollywood film set.

Weighing under 250 grams, Mavic Mini is almost as light as the average smartphone. This makes it exceptionally portable and places it in the lowest and safest weight class of drones, which in many countries may exempt it from certain regulations. For traveling light with a drone, there is no better solution, and that explains why the Mavic Mini was so well received. 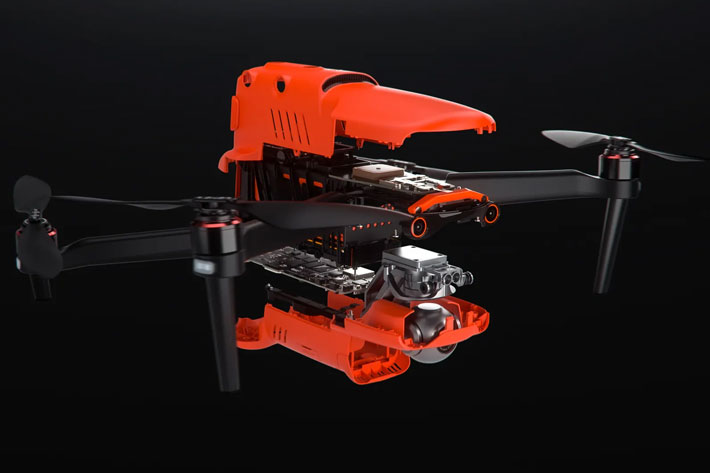 Autel EVO II – A  8K drone to keep under your eye

Introduced at CES 2020, the Autel EVO II is included in this list as a “keep an eye on this drone” suggestion. The original EVO, launched at CES 2018, was considered a potential competitor to DJI’s Mavic Pro, and this new model aims to take aerial imaging to a new level, offering 8K in a foldable drone you can take anywhere.

Currently in production, with final specifications and price not yet available, the EVO II is the first 8K portable drone, says the company. The model will be available in three different packages, EVO II, EVO II Pro and EVO II Dual, for different types of users. The EVO Pro II, with a 1” CMOS sensor with 20MP, a resolution of 5472×3648, adjustable aperture f/2.8- f/11 and ISO range 100-12800 is presented as the 6K solution for aerial cinematographers.

The Autel EVO II complete list of features will be revealed during 2020, but this is a model that, taking into account how the first EVO was received, photographers and videographers should keep an eye on. 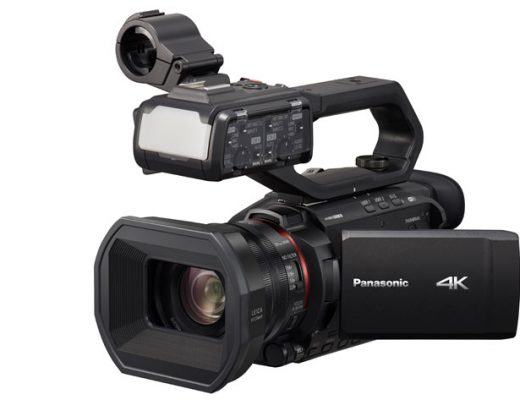