The iconic Mavic series from DJI has two new drones, featuring new intelligent features and optimized flight performance, introducing what the company says is a new era of aerial photography. 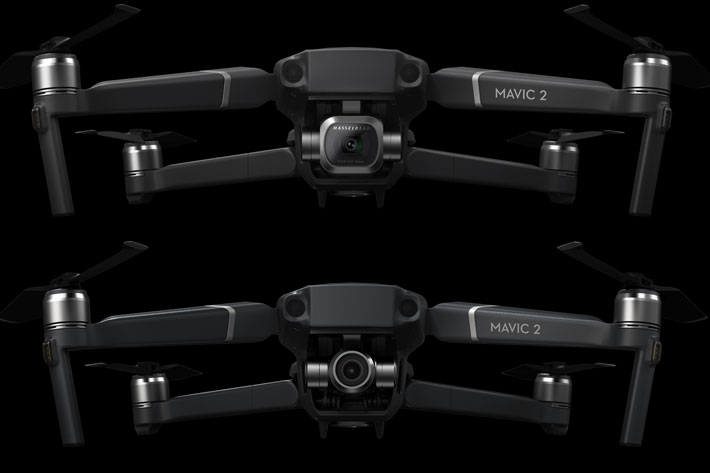 August is a month of changes for the imaging industry. On the same day we’ve DJI presenting its new drones, heralding a new era for camera drones and aerial photography, while Nikon, with its mirrorless system, the Z7 and Z6 cameras, breaks the 8-bit barrier for full-frame mirrorless video, and opens a whole new world to filmmakers.

DJI starts its press-release with a note that is difficult to dispute. The company claims it is “the world’s leader in civilian drones and aerial imaging technology”; looking at the complete line of products available, and the evolution of each new generation, it’s hard to say they’re wrong. The Mavic 2 Pro and Mavic 2 Zoom continue to be at the forefront, offering solutions fitting the needs of both professionals and consumers, with packages that will appeal to a wide range of users.

The Mavic 2, which the company presents as “the most advanced DJI camera drone ever built, designed for professionals, aerial photographers and content creators. Incorporating the iconic folding design of the world’s most popular Mavic Pro, the Mavic 2 is a powerful platform with new gimbal-stabilized cameras and advanced intelligent features like Hyperlapse and ActiveTrack for easier and more dynamic storytelling. With an impressive flight time of up to 31 minutes and a more stable video transmission system, Mavic 2 delivers the optimal flight experience for capturing epic shots.

“When the Mavic Pro was launched two years ago, it redefined the way people looked at a drone and expanded possibilities for creators around the world,”said Roger Luo, President at DJI. “Today, we enter a new era of aerial photography with the introduction of DJI’s new flagship product, the Mavic 2 series. The Mavic 2 Pro and Mavic 2 Zoom will enable photographers and videographers to take their inspirations to the air quickly and elevate their creative ideas to new heights.”

The close cooperation with Hasselblad extends now to a new first, shown on the Mavic 2 Pro. It’s the world’s first drone with an integrated Hasselblad camera for outstanding image quality with superior light and color performance. Housing a 1-inch CMOS sensor with a 10-bit Dlog-M color profile, the camera captures four times as many levels of color per channel compared to Mavic Pro to provide maximum flexibility for photo and video editing. The Mavic 2 Pro can capture 20-megapixel aerial shots with utmost color accuracy using Hasselblad’s unique Hasselblad Natural Color Solution (HNCS) technology, while an adjustable aperture from f/2.8-f/11 provides more control across a wide variety of lighting conditions. With 4K 10-bit HDR support, the Mavic 2 Pro can be plugged into a 4K TV with HLG and will play back footage with the right color tones. 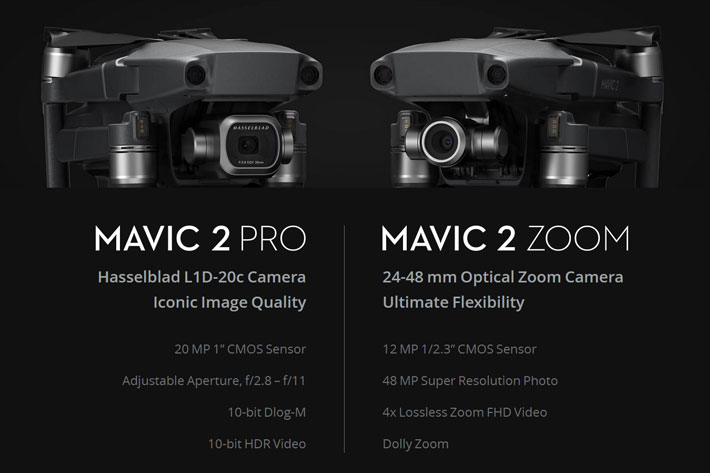 DJI did not stop there, and the second drone introduced, the Mavic 2 Zoom, is DJI’s first foldable consumer drone with zoom, providing a dynamic perspective that ushers in a new era of creative storytelling. Aware of the importance zooms have in a dynamic narrative, DJI takes a first step here, with a two-times optical zoom (24-48mm), a solution that looks similar to what was used in some compact models in the past, like the APS Canon ELPH 2, with a f4.2 23-46mm zoom. Aware that while interesting, the zoom offers a short range, DJI combines it with a two-times digital zoom to simulate a 96mm telephoto lens that captures lossless video in full HD resolution.

While the zoom coverage may not seem much for some people, it’s a start, and we can expect things to change in future models, probably a Mavica 3 Zoom… with a 24-105mm optical zoom! For now, we will have to live happily with this Mavic 2 Zoom powered by a 1/2.3-inch CMOS sensor,  featuring an hybrid auto-focus which combines phase and contrast detection for higher focus accuracy with an increased focus speed of up to 40% faster than before. Users can shoot vivid 12-megapixel photos or take advantage of the new Super Resolution feature that uses optical zoom to automatically capture and stitch nine photos together for a highly detailed 48-megapixel image, making it an ideal option for landscape photography.

Exclusive to the Mavic 2 Zoom, the new Dolly Zoom QuickShot mode opens a new visual language for storytelling that was previously reserved for professional cinematographers. It creates an otherworldly warped perspective by automatically zooming in as it flies away from its subject, keeping the subject the same size while the full background of the scene is revealed. 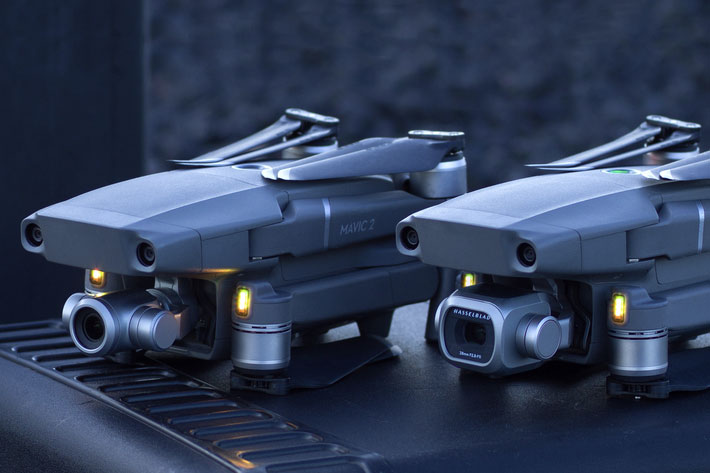 Both cameras capture vivid 4K ultra-high definition video with extreme detail, recording at a maximum bitrate of 100 megabits per second using the H.265 compression codec to give you, says DHI, “an exceptional degree of latitude in post-production workflows. For photographers, new Enhanced High Dynamic Range capabilities blend a sequence of photos for ghost-free high dynamic range, giving the Mavic 2 Pro an impressive 14 stops of dynamic range and Mavic 2 Zoom up to 13 stops.”

Epic, cinematic shoots that once were hard to make are now accessible through the use of intelligent tools. A new Hyperlapse feature produces establishing shots that show the passing of time, which you can share to social media immediately. JPEG and RAW photos can be simultaneously saved on a Micro SD card or the internal storage, leaving more room for post editing.

Users can manually control the drone – Free mode – while shooting a Hyperlapse video, or choose between Circle, Course Lock or Waypoint mode to create timelapses with a simple tap of a button in the DJI GO 4 Mobile App. Here is what each of the modes does:

Keeping a moving subject in the frame is now easier than ever with ActiveTrack 2.0, says DJI. This enhanced auto-track feature delivers a powerful combination of autonomous tracking and obstacle sensing capabilities never before seen in a DJI drone. Using the main camera and the front dual vision cameras, the Mavic 2 creates a three-dimensional map of the area in front of it, and uses new trajectory algorithms to analyze motion and predict the subject’s path up to three seconds in the future. When tracking a target, the Mavic 2 can recognize and avoid obstacles while shooting your target without interruption. It can stay on target, even if your subject momentarily goes behind an obstacle, and can track the subject at higher speeds of up to 44 mph (72 km/h).

Safety during flight is a growing concern when it comes to drones, and the Mavic 2 drones are designed to offer not only safer but smarter and stable flight. The Mavic 2 delivers autonomous flight capabilities that help you capture shots with even more confidence in complex environments. A fully upgraded FlightAutonomy system transmits data to a more powerful central processor for more accurate obstacle sensing and safer flight. For the first time ever in a DJI drone, Mavic 2 has 10 sensors on all sides of the aircraft to automatically detect obstacles in its path and help prevent collisions, allowing you to focus on capturing the perfect shot.

An improved Advanced Pilot Assistance System (APAS) allows the aircraft to analyze its surrounding environment and automatically fly around obstacles without stopping. In addition, the Mavic 2 has a Bottom Auxiliary Light that turns on automatically to ensure safe and precise landings in low-light situations.

A newly designed OcuSync 2.0 video transmission system enables a more stable connection between the drone and its remote controller. The system features stronger interference resistance and auto-switching capabilities that supports both 2.4 GHz and 5.8 GHz frequency bands with the capability to use different frequencies for uplink and downlink data streams. It delivers 1080p video transmission feeds at a distance of up to 8km, allowing you to instantly edit and upload Full HD footage directly from the video cache in the DJI app in a wider variety of situations. Original resolution photos in JPEG can be saved directly to your mobile device, so you can immediately share what you create without the need to transfer files from the drone.

The Mavic 2 ‘s redesigned, more aerodynamic airframe reduces body drag by up to 19% compared to the Mavic Pro, allowing the Mavic 2 to fly at speeds of up to 44 mph (72 km/h) in Sport mode. Combined with a more efficient, quieter propulsion system and noise reducing propellers, the Mavic 2 has a maximum flight time of up to 31 minutes.

To ensure crisp photos and smooth, shake-free footage, the Mavic 2 houses an ultra-precise three-axis mechanical gimbal to stabilize its camera even during high-speed motion. Photos and videos can be saved directly to the drone using its 8 GB onboard storage. All DJI users have control over how their data is stored and managed, as part of DJI’s commitment to protecting its customers’ data.

A redesigned remote controller features detachable control sticks for ease of storage and portability. The Mavic 2 is compatible with DJI Goggles with the gimbal (yaw) control range up to -75°–– +75° in Head Tracking mode, offering users a more immersive FPV flight experience. 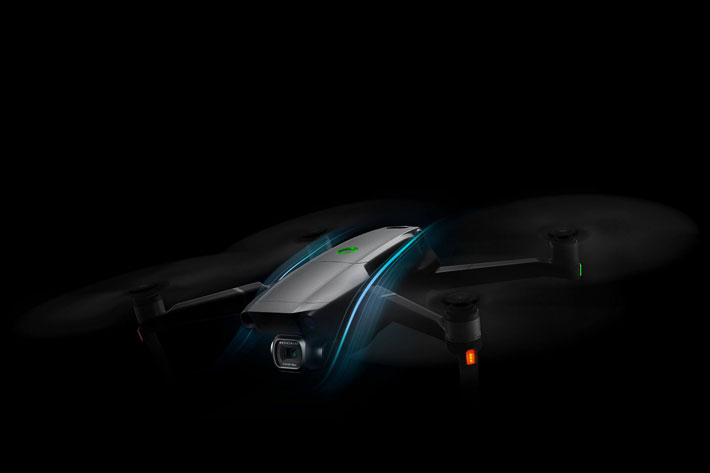 One final note, using DJI’s words: “Our dream has always been to make a drone that exists where engineering, technology, and the needs of the aerial photographer converge. A drone that embodies all of DJI’s advanced, signature technologies, and is able to redefine what is possible for the world of aerial photography. In creating the Mavic 2, we have made this dream come true.”

Starting today, the Mavic 2 is available for purchase at store.dji.com and the four DJI Flagship Stores.