DJI went to CES 2017 with a series of new products, including a Phantom 4 version to celebrate the Chinese New Year. At the same time, DJI acquires, apparently, a major share of Hasselblad, cimenting a relation started in 2015. 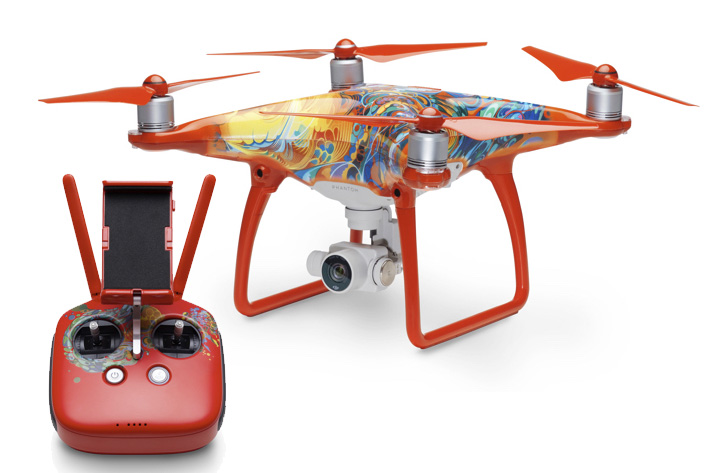 Multiple new products, a version of the Phantom 4 that is a collector’s edition and the rumor that DJI bought Hasselblad make the presence of the company at CES 2017 even more interesting, for those involved with aerial photography and videography.

The customized Phantom 4 was one of the highlights of the show, not so much because of the technology, already known, but because it represents a new phase on the relation DJI has with the market. The company has enough confidence to offer a special edition, in celebration of the Chinese New Year. DJI invited renowned illustrator and designer Martin Sati to customize the Phantom 4, adding colors and his imagination to this flagship DJI product. Sati’s design features the phoenix as the centerpiece, a symbol of good fortune and happiness in Chinese mythology. He also drew inspiration from the four basic elements of nature – air, fire, water and earth – and reflected each of these elements in his design.

“DJI has developed some of the world’s best aerial platforms and camera technology and now, we bring to our customers a new range of product extensions and accessories to further expand their creative possibilities,” said Paul Pan, DJI’s Lead Engineer. “Whether it’s shooting your own music video with the Osmo Mobile Silver, giving professional operators more control and flexibility with the CrystalSky monitor, or having an easy-to-use application for an aerial mapping project, we want to empower creators with the tools they need to bring their ideas to life. We’re very excited to be here and give CES attendees a glimpse into the future of aerial and imaging technology.” 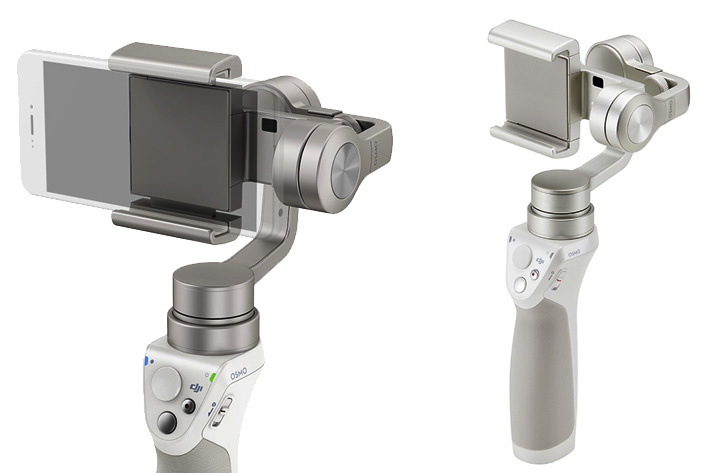 One of the most accessible products on show is the Osmo Mobile, which turns a smartphone into a smart motion camera, giving creators the tool to effortlessly create cinematic videos. The new Osmo Mobile Silver was created with lifestyle in mind and shares the same high-quality build and ergonomic design found in the rest of the Osmo family. Using the DJI GO app, users can track their subject automatically, create motion timelapses, take dramatic long exposures, make 9-shot panoramas, and livestream their story to social media.

Further enhancements have been added to the Osmo Mobile Silver to make every moment you shoot look smooth, professional and ready to share. A new Beautify mode uses automatic identification and intelligent processing technologies inside the DJI GO app, allowing users to do minor touch ups and give their videos that perfect, professional sheen. The Osmo Mobile Silver will also work with FiLMiC Pro, a professional filmmaking mobile app that gives creators more flexibility and creative freedom with their handheld device. 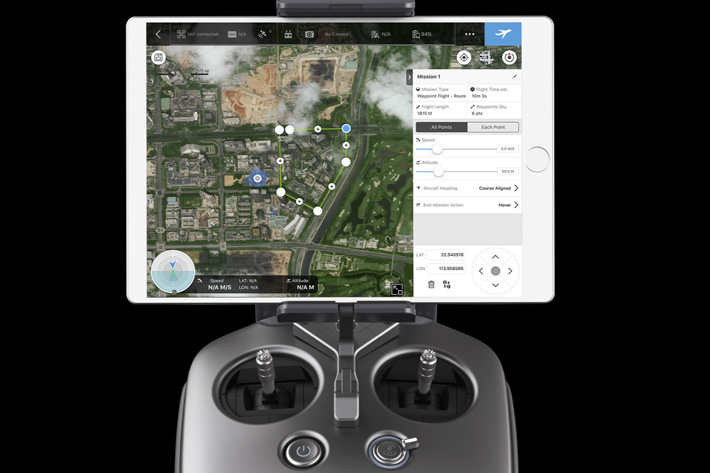 Designed for professional operators to plan and control autonomous flights for DJI aircraft, the Ground Station Pro (or GS Pro) is a new iPad app. Through the app’s concise, easy to use interface, complex flight missions can be planned with just a few taps. GS Pro was designed to improve workflow and dramatically increase efficiency in a wide range of industries, especially those in aerial mapping, architecture, precision agriculture and electrical inspections.

The 3D Map Area function allows the aircraft to generate efficient flight paths after the operator has set their required flight zone and camera parameters. The aircraft will then follow this route throughout its mission. The image data captured during these flights can be input into 3D reconstruction software to generate 3D maps, while the mission itself can be saved for re-use.

The Tap and Go Waypoint feature allows for up to 99 waypoints per mission and each waypoint can have up to 15 consecutive actions, including aircraft rotation, gimbal pitch, start/stop recording, photo capture, and hover. A Virtual Fence increases safety and ease of use by locking the aircraft’s height and speed within a designated area. As the aircraft approaches the virtual fence, it will brake and hover to ensure it stays within the flight area.

Compatible with most DJI aerial platforms and Zenmuse cameras, the DJI GS Pro will serve as a powerful and convenient tool for many industries and give critical missions added accuracy and reliability. The GS Pro iPad app is free and available for download at the App Store. 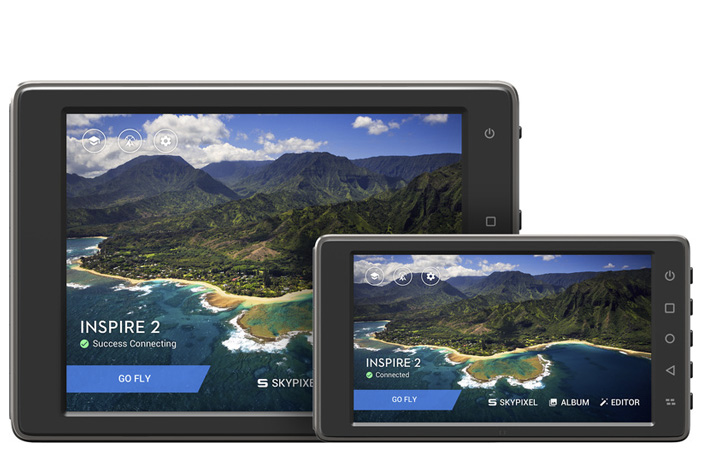 Created for outdoor aerial imaging, the CrystalSky monitor features an ultra-bright screen that is clearly visible in sunlight. It is designed from the ground up to work seamlessly with the DJI GO app, giving camera operators total control.

A maximum 2000 cd/m² of brightness means the CrystalSky monitor is more than four times as bright as typical mobile devices. On-screen details are clear and sharp, and colors are vibrant, giving the quality needed to fine-tune image composition. Optimized video decoding is used to provide smooth, real-time video with minimal latency. The monitor supports H.264 and H.265 video decoding, allowing it to play back files at up to 30 fps and 60 fps respectively.

The CrystalSky monitor’s HDMI port allows up to 4K video to be output to FPV goggles and other display devices. The monitor’s storage can be extended, or footage recorded on a Micro SD Card can be played back directly on the monitor. It can also be used for footage backups.  The embedded DJI GO app provides full access to all DJI GO features including aircraft parameter adjustment, camera control, footage management, and playback.

A two-cell 4920 mAh external battery gives the CrystalSky monitor a longer operating time than comparable mobile devices. It supports quick charge, and controls its discharge rate well even in low temperatures. The external battery has been designed for more extreme temperatures. CrystalSky is able to operate in as low as -4°F (-20°C) and, with its internal cooling system, functions normally in temperatures as high as 104°F (40°C). 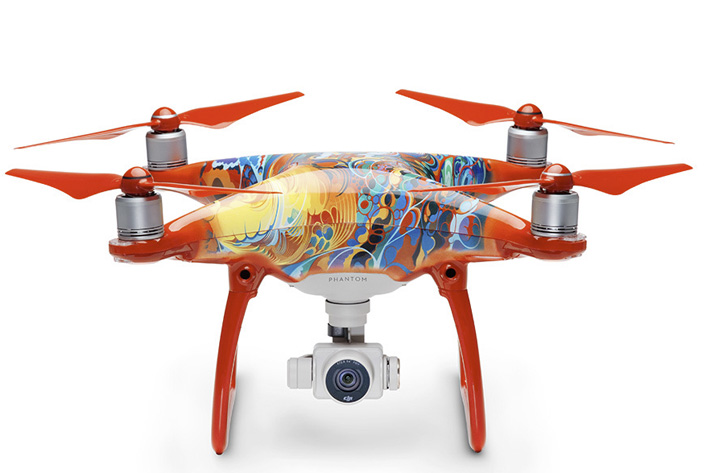 Finally, DJI had its new Phantom 4 Chinese New Year Edition, which houses the same on-board intelligence that make piloting and shooting great shots simple through features like its Obstacle Sensing System, ActiveTrack and TapFly functionality. With 4K video recording, 3-axis camera stabilization, advanced computer vision and sensing technology, aerial imaging has never been so easy. The Phantom 4 also has DJI’s signature Lightbridge video transmission system onboard, allowing users to see what their camera sees in HD and in real-time at a distance up to 5 kilometers (3.1 miles). The Phantom 4 can achieve up to 28 minutes of flight time.

In other news, the website Luminous Landscape indicates, using inside information that DJI bought a major share in Hasselblad, although there is no offficial comment from any of the companies. DJI states that “We have no further news about DJI’s partnership with Hasselblad. We will continue to work together to push forward world-class imaging to creators around the world.”

The relation between the two companies started back in November 2015, when Hasselblad and DJI announced a corporate partnership through DJI’s acquisition of a strategic minority stake in Hasselblad. Then in 2016 DJI and Hasselblad introduce their first joint aerial photography package, built around the medium format camera A5D and DJI’s professional flying platform M600. It’s only logical that DJI, with its investment in heavy drones, wants to have Hasselblad cameras and lenses onboard, so it makes sense to extend the relationship between the two companies. In that sense, DJI buying more shares in Hasselblad makes complete sense and should not be looked upon as a surprise. DJI is making sure it keeps its dominant position in multiple areas when it comes to drones and imaging. Hasselblad is just one asset they can use.

DJI takes Hasselblad to the skies