Atomos continues to expand the LUMIX and Apple ProRes RAW eco-system and the newest announcement is here: the Panasonic LUMIX BS1H joins the 30 cameras supported by Atomos. 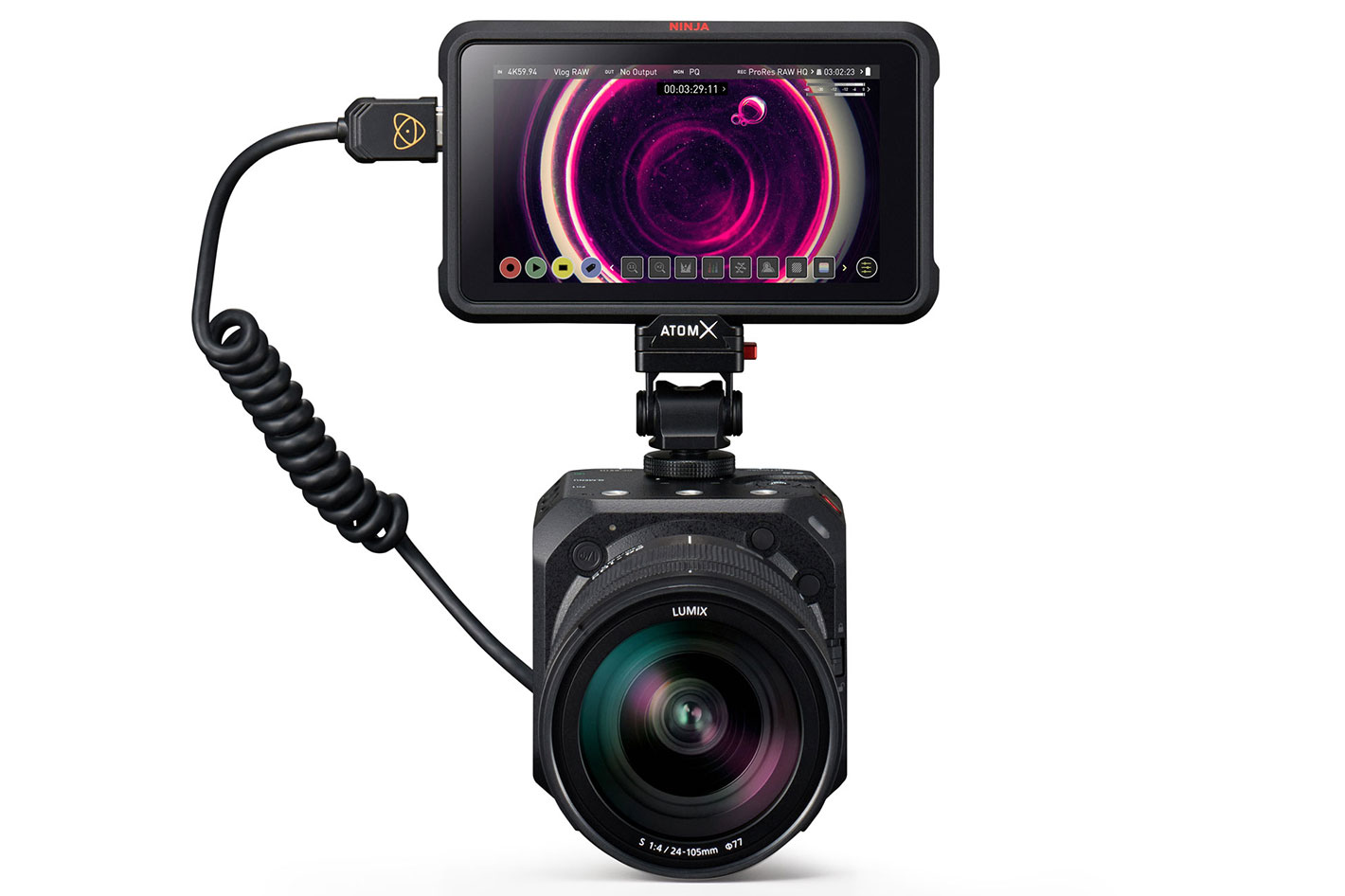 Panasonic just announced its new camera, LUMIX BS1H, and Atomos confirmed that the box-style camera will work with either the Atomos Ninja V or Ninja V+ to offer various ProRes options.

The Panasonic LUMIX BS1H is the most recent camera released by Panasonic and is a versatile box style camera. It combines stunning cinema-quality video performance of the full-frame LUMIX S1H including impressive bokeh, low-light performance, wide dynamic range of 14+ stops V-Log and network connectivity.  All in an the easy-to-deploy box-style profile with comprehensive professional I/O and many mounting options.

The camera’s consistent look of images minimizes post-production processing when used with other Panasonic LUMIX production cameras such as BGH1, a Micro Four Thirds box-style camera, or S1H, a full-frame mirrorless cinema camera, are used together. A great addition to the LUMIX BS1H is the renowned colorimetry of the VariCam line-up of cinema cameras.

To make things easier, Atomos announced that the newly announced Panasonic LUMIX BS1H joins the LUMIX and Apple ProRes RAW eco-system. When combined with either the Atomos Ninja V or Ninja V+ the LUMIX BS1H will be capable of recording up to 5.9Kp30, 4.1Kp60 and 3.5Kp50 anamorphic ProRes RAW. 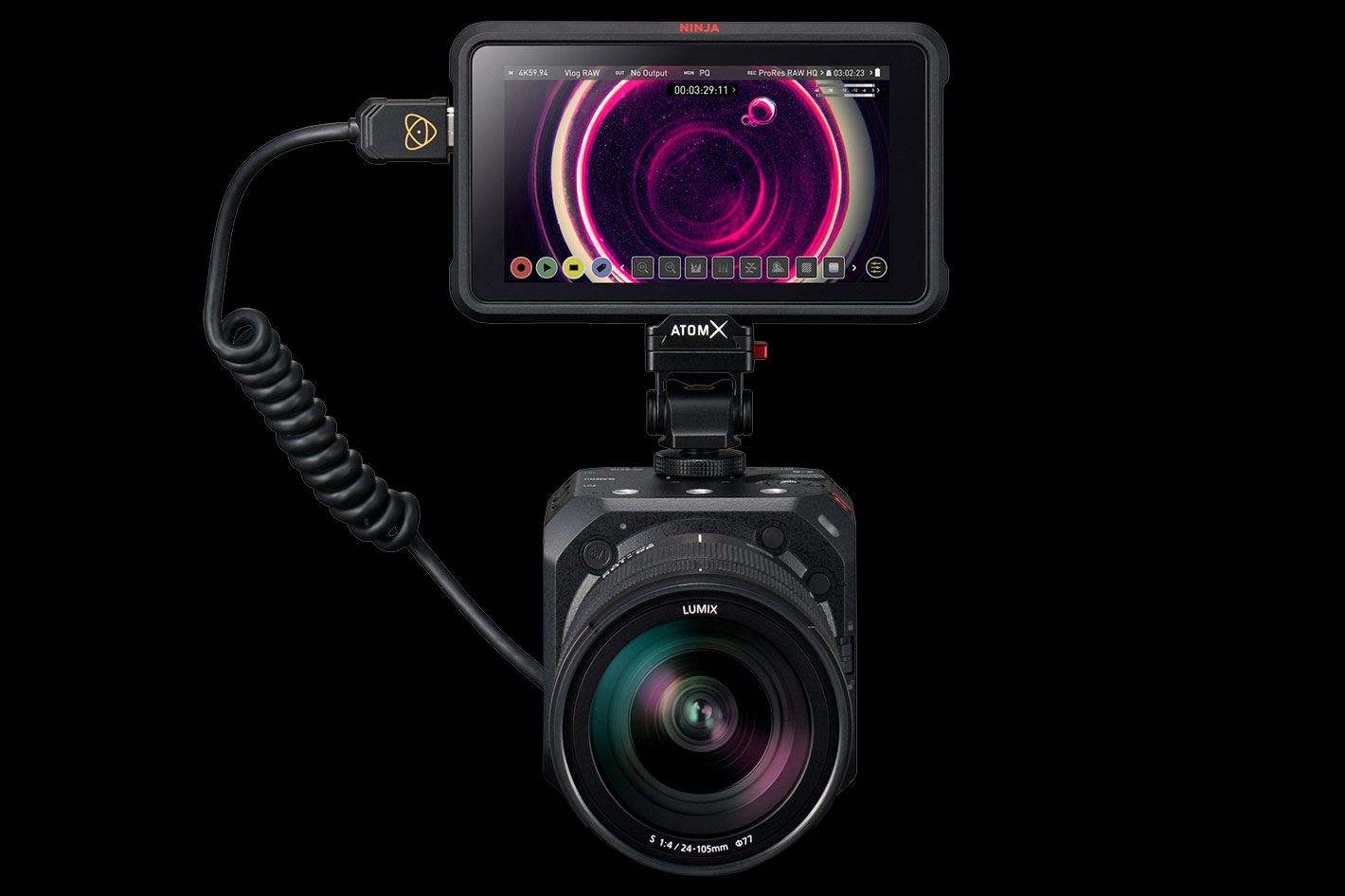 The Ninja V or Ninja V+ and the LUMIX BS1H combination for multicamera productions, is facilitated by the camera’s LTC and Genlock inputs perfectly complemented with the Atomos UltraSync One wireless sync system, which works alongside the AtomX SYNC module for Ninja V and Ninja V+. When configuring the UltraSync One Genlock mode, Atomos notes that users muste set output type to 1080i-PSF mode regardless of camera resolution setting.

The small and compact size of the LUMIX BS1H  makes it perfect for gimbal and drone shooting, plus flexible broadcast, cinema and multicamera production. Its full-frame 24.2 MP image sensor provides anamorphic capture and dual native ISO provide the next level of production utilising the power of ProRes RAW across the range.

This new addition to the Apple ProRes RAW eco-system confirms that ProRes RAW continues to build momentum in 2021 with over 30 cameras supported by Atomos, cementing its position as the industry standard for RAW video capture. ProRes RAW combines the visual and workflow benefits of RAW video with the incredible real-time performance of ProRes.

The format gives filmmakers enormous latitude when adjusting the look of their images and extending brightness and shadow detail, making it ideal for HDR workflows. Manageable file sizes speed up and simplify file transfer, media management, and archiving. ProRes RAW is fully supported in Final Cut Pro, Adobe Premiere Pro and Avid Media Composer, along with a collection of other applications including ASSIMILATE SCRATCH, Colorfront, FilmLight Baselight and Grass Valley Edius.