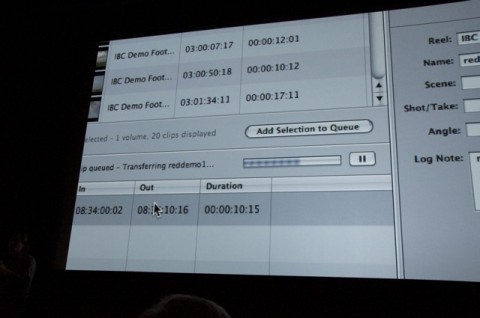 I spent much of today on the Fox lot, watching Ted Schilowitz talk about what’s up with Red. I’ll have another article up shortly about their new hardware, but in terms of workflow, some interesting things were discussed today for upcoming changes coming this year from Apple, Adobe, and Avid for native (or more native) Red workflows. Details after the jump.

We were shown a not-yet-shipping version of Final Cut Pro, I think I glimpsed version 6.0.5 on the screen as it launched, that will support a new functionality in Log & Transfer. At present, you can import Red material and it will transcode to one of the ProRes codecs. This process is slow. The new option will be to simply rewrap the R3D files as QuickTimes. This is NOT using the reference files, these will be freestanding, self contained QuickTime files, using the native R3D data wrapped in a QuickTime, uh, wrapper. This sounds very similar to how native P2 DVCPRO HD media is rewrapped MXF files in a QT wrapper. This will allow for native 2K workflows. We were shown this, but without playback – just scrubbing of the native files, which makes me cautious about how soon this will ship and how good the performance will be. The good news is that the process is QUICK – it isn’t a transcode, it the progress bar is merely indicating status of copying the files to the Capture Scratch directory, with a very fast QT wrapper process as well – negligible, as compared to transcoding to ProRes. The good news is that it will be native support for R3Ds. The main image for this article shows the transfer process of rewrapping R3D data as it is copied to scratch disk (fast process), the image below is the Log & Transfer window in the new version: 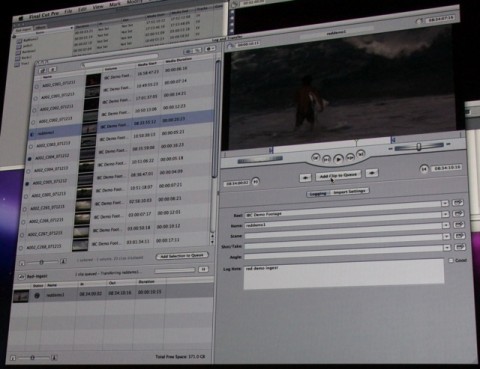 Tagging into this will be support for these wrappered Red files in Color (version 1.0.3 was what they were demoing, dunno how close to done it is, but seems very close). There is a new tab in the Primary color correction room which lists all the embedded camera settings (yep, they carry over into the wrappered QT files)…and lets you change’em, which reaches into the source 12 bit material. This is KEY, as it lets you manipulate the 12 bit source, in an (up to) 32 bit floating point environment, accessing the RAW data to do things like scale back the exposure to retrieve highlight data. A personal kvetch of mine is how many folks immediately transcode to ProRes. Yeah, it works pretty well and looks good, but you’ve burned out the benefits of RAW, such as highlight retrieval, white point adjustments, 12 bits of source data, etc. This is akin to shooting RAW on DSLR and immediately converting to JPEG, because “it looks good and the files are smaller.” Not wisest choice, and I’ll expound on this later. But go shoot some RAW DSLR, bring into even iPhoto, and reduce Exposure. Then do it with a JPEG and say “Oh, gee, that’s not nearly as good.” Yeah. THAT. (That’s an article I need to write…) Missed getting a shot of this one – oops.

All that camera related metadata? Yeah, the recent 1.1.1 update in Final Cut Server will be able to see all that color related stuff too, and more, allowing for searches based on, for instance, all 4K Redcode 36 files shot in 2:1 aspect ratio with a white point over 6500 shot in the afternoon on a certain date, and see all those in one place. Roxor me soxors, I do luvs data management with kwality metadata. Based on some VERY preliminary messing with it, I think it’ll require these wrappered, QT enabled embedded metadata files to do any good with it, though – couldn’t get it to work on existing Red footage since I don’t have that unreleased (tautology? hello?) new ‘n improved Red Plugin for Final Cut Pro. Here’s a shot of that metadata, incomplete as it went off the bottom of the projected screen image: 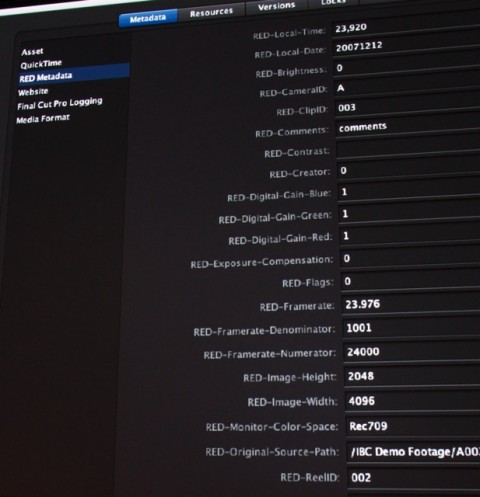 Mike (last name missed, apologies) from Adobe got up and discussed some upcoming FREE updated features for CS4 that will ship as a free point release to existing CS4 users/purchases probably in December or so – NATIVE R3D support, up to 4K, in Premiere or After Effects. 8 bit output from Premiere, up to 32 bit output in After Effects. Since they interleave so nicely, edit in Premiere, but do final render output from AE. There is a global setting for playback resolution, 1K works even on (some) laptops, and 2K works in realtime (24p) on some Vista boxes. Mac and Windows support on these features for CS4 as well.

I wish I knew more about this one (anyone feel free to send me a link or somethin’, anyone from Avid, happy to talk to you!) – Ted mentioned briefly that Avid was looking to do something more integrated with MXF files and Red, but I didn’t overhear any more information than that. Michael Cioni also talked about DNxHD workflows with Scratch and other stuff, see the notes in the big long honkin’ article about new Red cameras I’m about to post (update – article here, go to page 2 for the notes)

OK, that’s all I’ve got on that front for now…