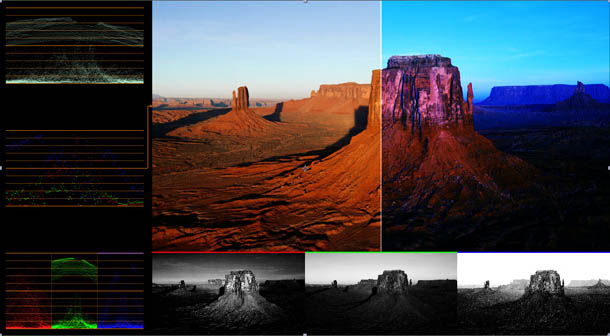 Just a quick note on some new Pixel Bender filters for use in After Effects CS4+.

qp_Grade Assistant from Quarterlight on AE Scripts provides a four-way view, with waveform monitor, RGB parade and a slice graph to assist with grading and color matching in After Effects. This script joins qp_Bars also by Christian Lett, which generates SMPTE color bars for video.

Shortcut Key Reference by David Torno Scripts on AE Scripts is a dockable, searchable panel that contains a reference to all the After Effects keyboard shortcuts. It includes a toggle for a Dropdown List and a Listbox version for fast searches.

YY_HexTex, also on AE Scripts, generates tiled hexagon textures, with extra options such as rotation, edge thickness, etc. Motion graphics, HUD designs, and more can be animated right in the comp, without needing to deal with messy precomps.

Pixelero has published Disks (appears as Tiling in AE), which makes overlapping circles with an option for hexagonal patterns. Pixelero offers several other interesting & free Pixel Benders that tile, though some of those may need tweaking in Pixel Bender Toolkit.