An audio design app that transforms the process of adding music and sound effects to picture, Audio Design Desk allows you to cut down regular full day projects to a few minutes, thanks to Artificial Intelligence. 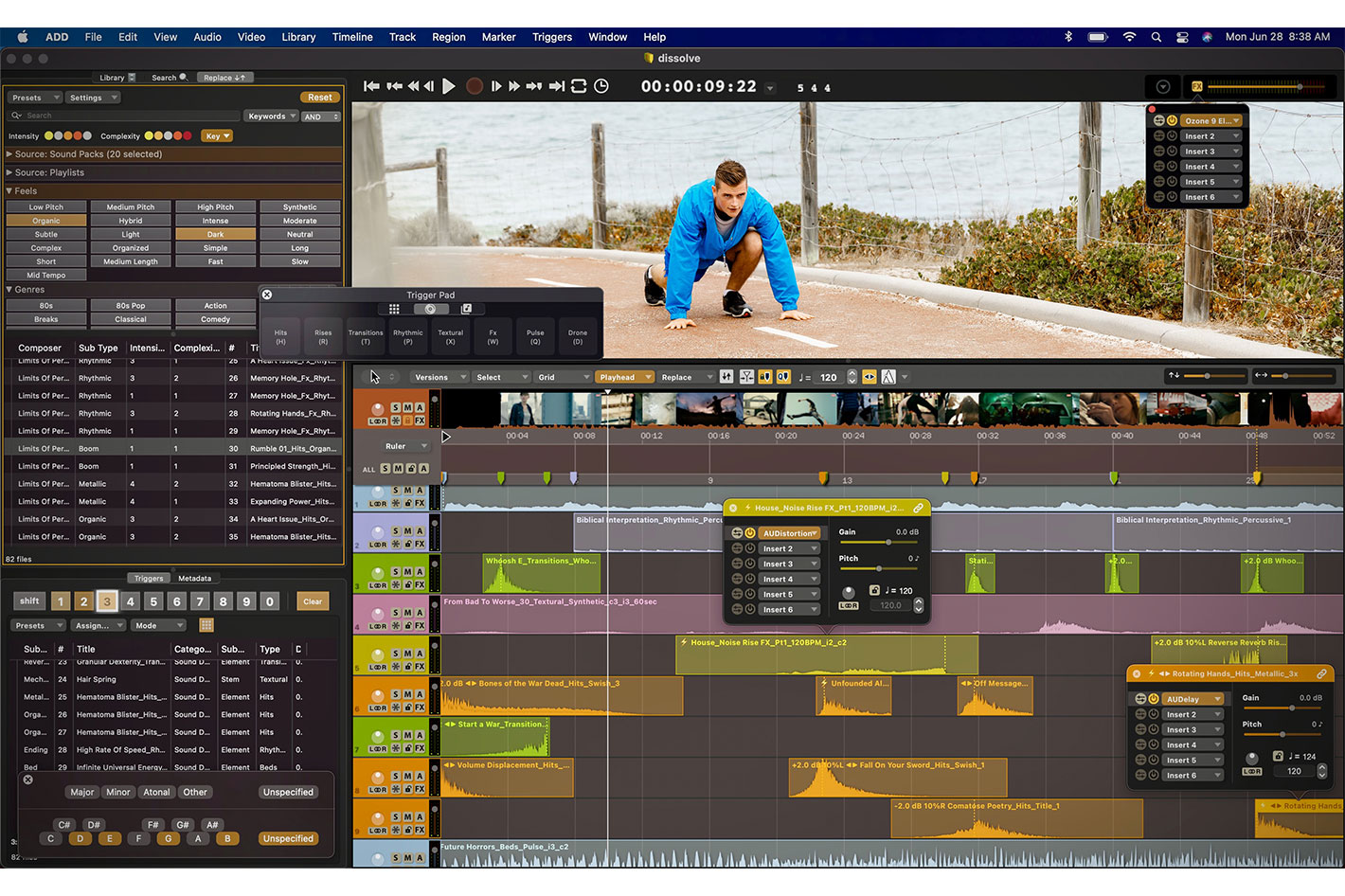 First introduced, officially, at NAB 2020, Audio Design Desk was first revealed at NAMM 2020 mid-January that year, offers real-time audio to video sound editing using AI. At the time the app was already being used on high profile productions for Netflix, Hulu and Amazon Prime among others, meaning it was rapidly acepted as another tool to help creatives develop their projects. The brand new audio creation tool, we wrote then here at ProVideo Coalition, represents an entirely new breed of Digital Audio Workstation – or DAW – that uses AI-assisted content creation tools to enable filmmakers, editors, sound designers and creators to produce cinema-quality sound in seconds.

Now SoundOn – the new name for the company once named after the softwarek – announces Audio Design Desk 1.7. The AI-assisted application for macOS makes producing finished sound more than ten times faster than any other workflow, according to SoundOn. Monotony that has plagued audio post and musicmaking is now a fluid and fun process thanks to Audio Design Desk, which is less like an audio editor and more like a musical instrument.

Musicians, composers, podcasters, vloggers, video and sound editors, and filmmakers no longer need to sift through endless folders and libraries to find the right sound. Instead, Audio Design Desk’s Sonic Intelligence curates a massive database of more than 30,000 royalty-free music beds, cues, drones, hits, transitions, rises, FX, Foley and more. An intuitive natural-language search yields a list of options focused on whatever the moment demands. Then, the user can add them to the timeline instantly. Audio Design Desk identifies and retains sync points to picture with uncanny accuracy. 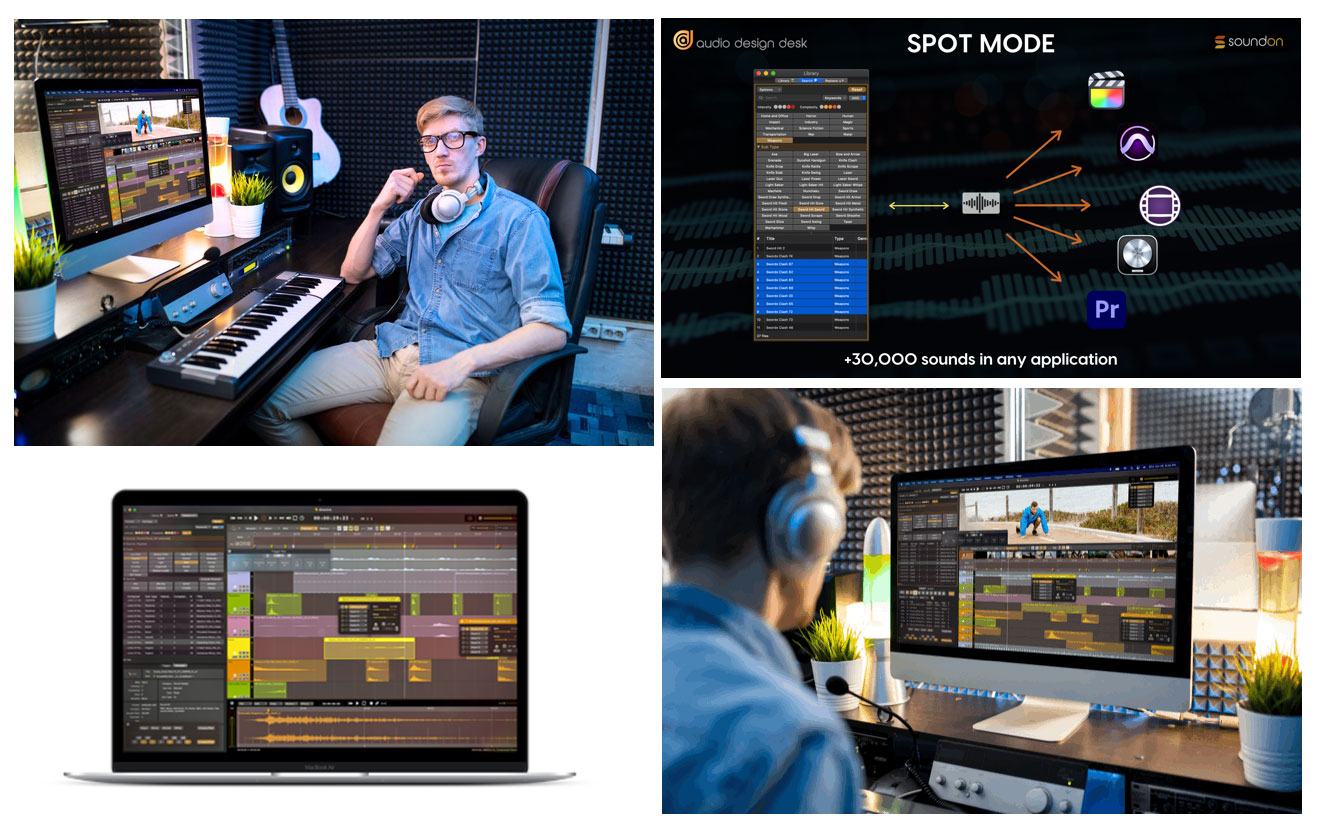 Some of the new features

Version 1.7 introduces Spot Mode, a powerful feature that enables subscribers to use these 30,000 royalty free sounds and music cues in their favorite Mac DAW or Video Editor, providing instant drag and drop simplicity of every music cue, design element, drum loop, and sound effect to make their edits sing. Version 1.7 also introduces transient detection for creating elements out of stems and advances on its DAWSync capabilities for controlling a DAW from Audio Design Desk and vice versa.

Sound pros know that a client’s favorite feedback is often, “Just like that, but different!” and Audio Design Desk has a button for that. With a single keystroke, the Replace function immediately finds alternate candidates for one or more sounds on the timeline, all while keeping crucial audio transients locked to visual hit points. One can simply let the software choose and then audition as many tries as needed — or define terms such as mood, feel, genre, intensity, and complexity. A new real-time Trigger Pad window even lets the user “play in” sounds like footsteps, doors, explosions, and car noises for unmatched precision. 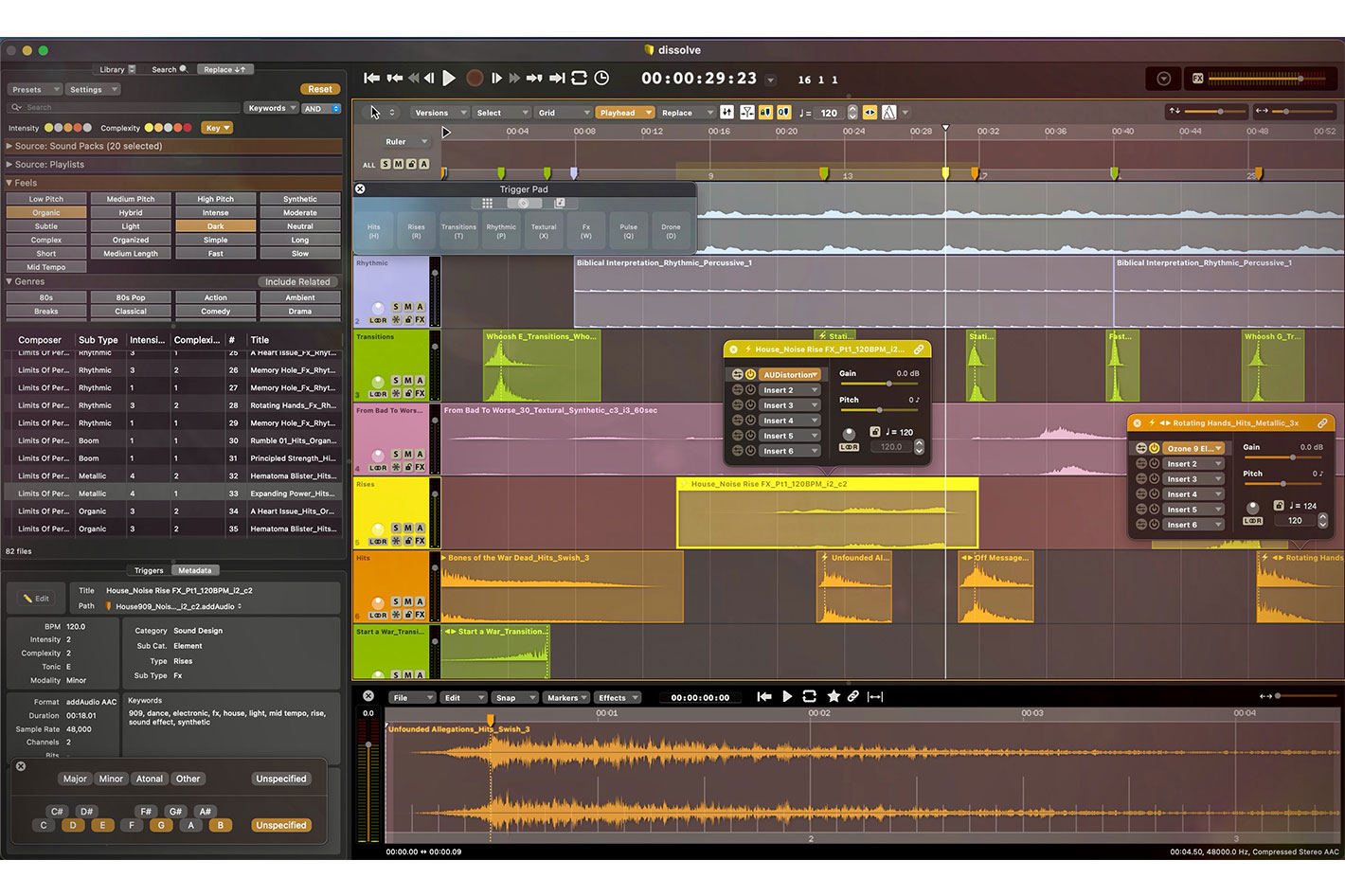 Musicians and podcasters will love the new integrated audio features. Audio may be recorded directly into the app without the need for other software, then edited using all the finesse of a DAW: snap, quantize, trim, fade, crossfade, nudge, a great sounding metronome, and more functions are at the ready and intuitive to apply — though Audio Design Desk gets so much right the first time that users will hardly be doing any trimming or nudging. Audio mixing hotkeys make short work of levels and panning, and Audio Design Desk’s tight integration with Elgato Stream Deck controllers lets users positively fly at editing tasks.

Workflows between Audio Design Desk and NLEs such as Premiere and Final Cut Pro are seamless thanks to AAF and XML support. Import your cut, create sound in the app, export back to the NLE and keep working with all audio regions perfectly synced — or bounce and export a full mix. Bundled with full in-app Frame.io integration, Audio Design Desk enables editors and sound designers to collaborate with one another worldwide.

Of course, importing of user sound libraries is supported. Thanks to Intelligent Import, the software will even extrapolate metadata for files that lack it, letting users optionally edit it afterwards. Users’ sounds then become searchable by Audio Design Desk’s advanced AI right alongside its native offerings. 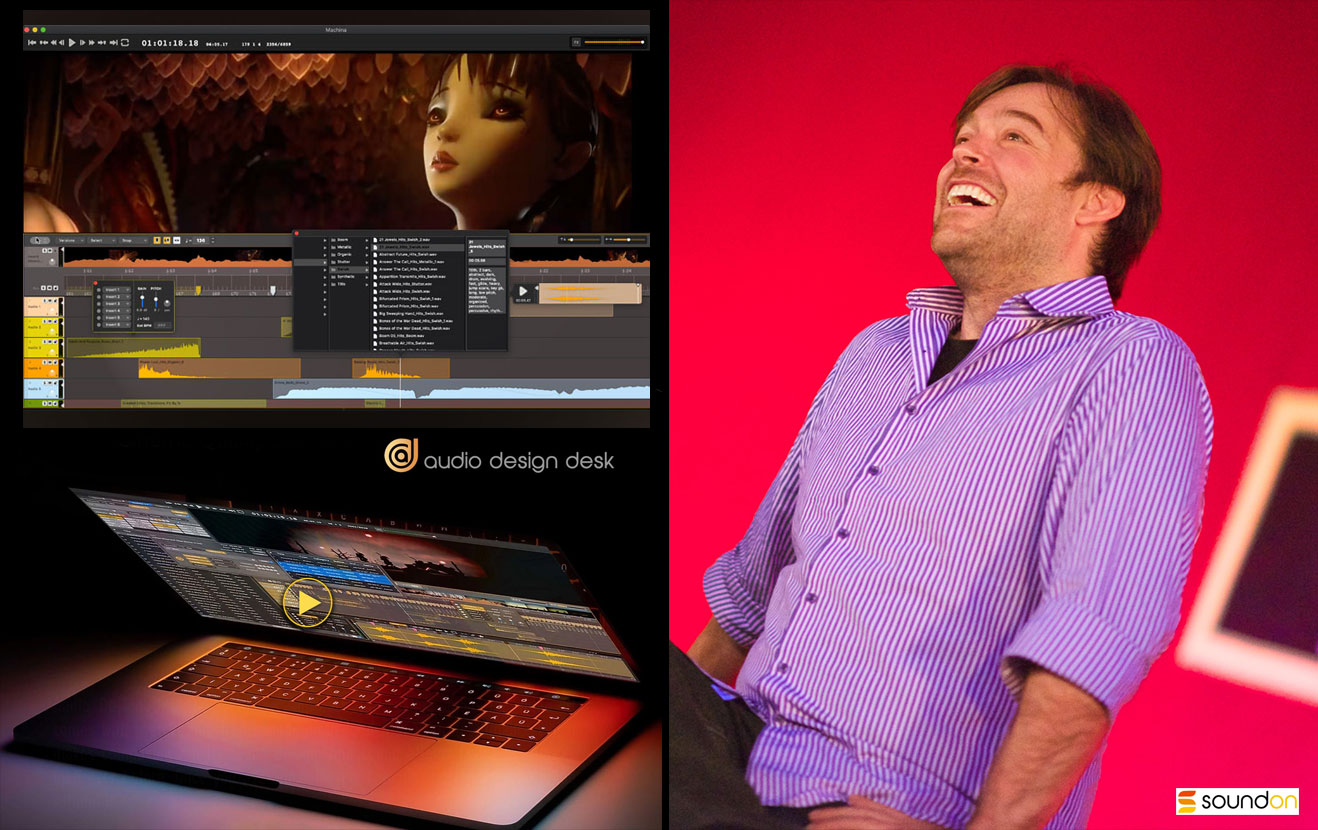 Since its debut in May 2020, Audio Design Desk has garnered an impressive number of accolades in both the pro audio and tech universes, including a Mix magazine Top 20 Products of the Year listing, a Macworld Editors’ Choice award, a Timmy Award for Best Tech Startup in Los Angeles, recognition as a SXSW 2020 Innovator, and Best in Show at the National Association of Broadcasters (NAB) convention. Testimonials include Oscar-nominated documentary filmmaker Matthew Cooke, who says, “This tool gives people like me so much power, it almost shouldn’t exist!” Jamie Hardt, sound editor on Spider-Man, Zero Dark Thirty, Insidious, and It adds, “This is the tool I’ve been looking for my entire career. It makes the pain and chore of sound editing disappear.”

“People need sound for their projects, whether they’re feature films, TV shows, YouTube videos, TikToks, or podcasts,” notes SoundOn founder Gabriel Cowan. “The rise of social audio has generated dozens of royalty-free audio companies, but you need to learn their platforms, download their stuff, import it, place it, sync it, nudge it, and do it all over again if it’s not a good fit. SoundOn’s Audio Design Desk puts everything under one roof in an interface that is quicker and more fun to use than anything else. It is truly sound at the speed of thought.”

Audio Design Desk is available now at three product tiers: Produce at $15 per month, Professional at $30 per month, and Perpetual for a one-time purchase price of $399. To learn more about each tier and download a free 30-day trial, visit Audio Design Desk.app/download. 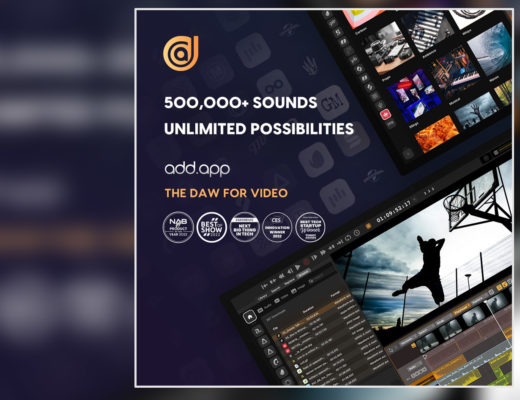 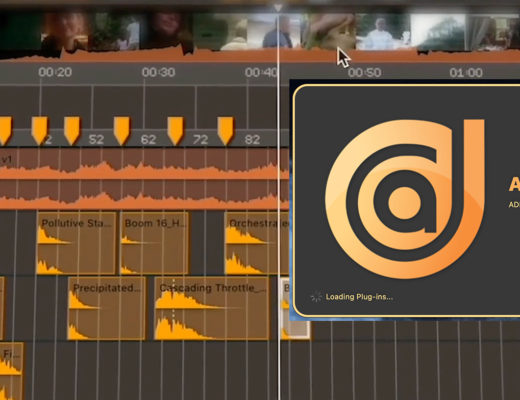 The concept of the digital audio workstation stems from a near-century-old combination of a recording system and a mixing... 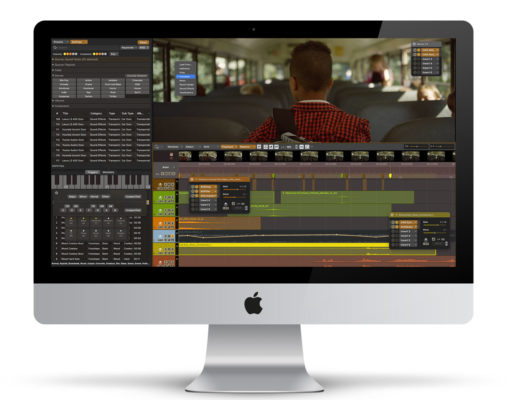 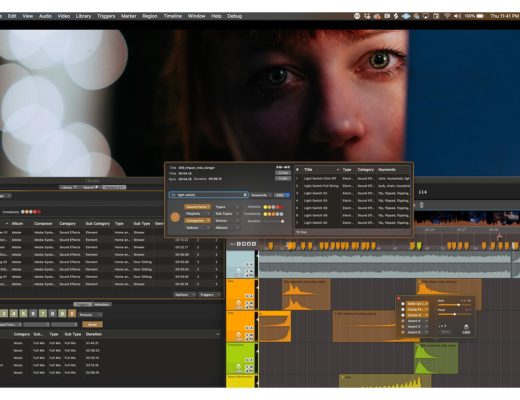