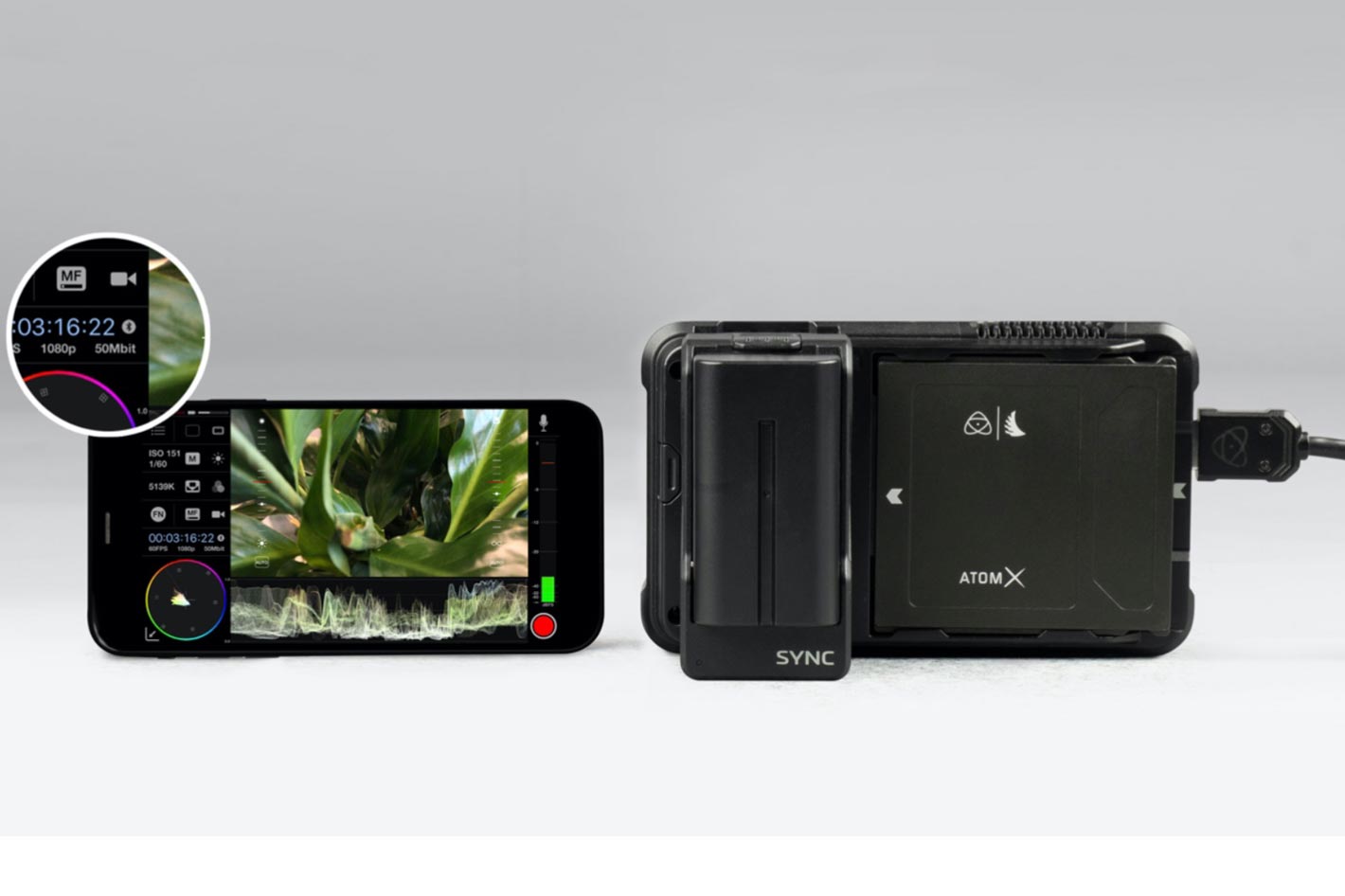 Debuting at IBC 2018, the Atomos AtomX Sync module for the Ninja V monitor recorder was presented as the solution to make audio and video syncing issues a thing of the past. Then in October 2019 Timecode Systems joined Atomos, to build tightly integrated multicamera workflow solutions that unify all recording devices on set. Used in films from the James Bond series to Marvel, the wireless sync technology from Timecode Systems became a part of Atomos, making effortless collaborative filmmaking an on-set reality.

Timecode Systems, a world leader in developing wireless sync technology, burst onto the market in 2012, receiving a prestigious IABM award for innovation before even shipping its first product. The company launched the first-ever Wi-Fi-enabled digislate, created the only timecode sync solution for GoPro cameras, and pioneered and patented a timecode-over-Bluetooth timing protocol. 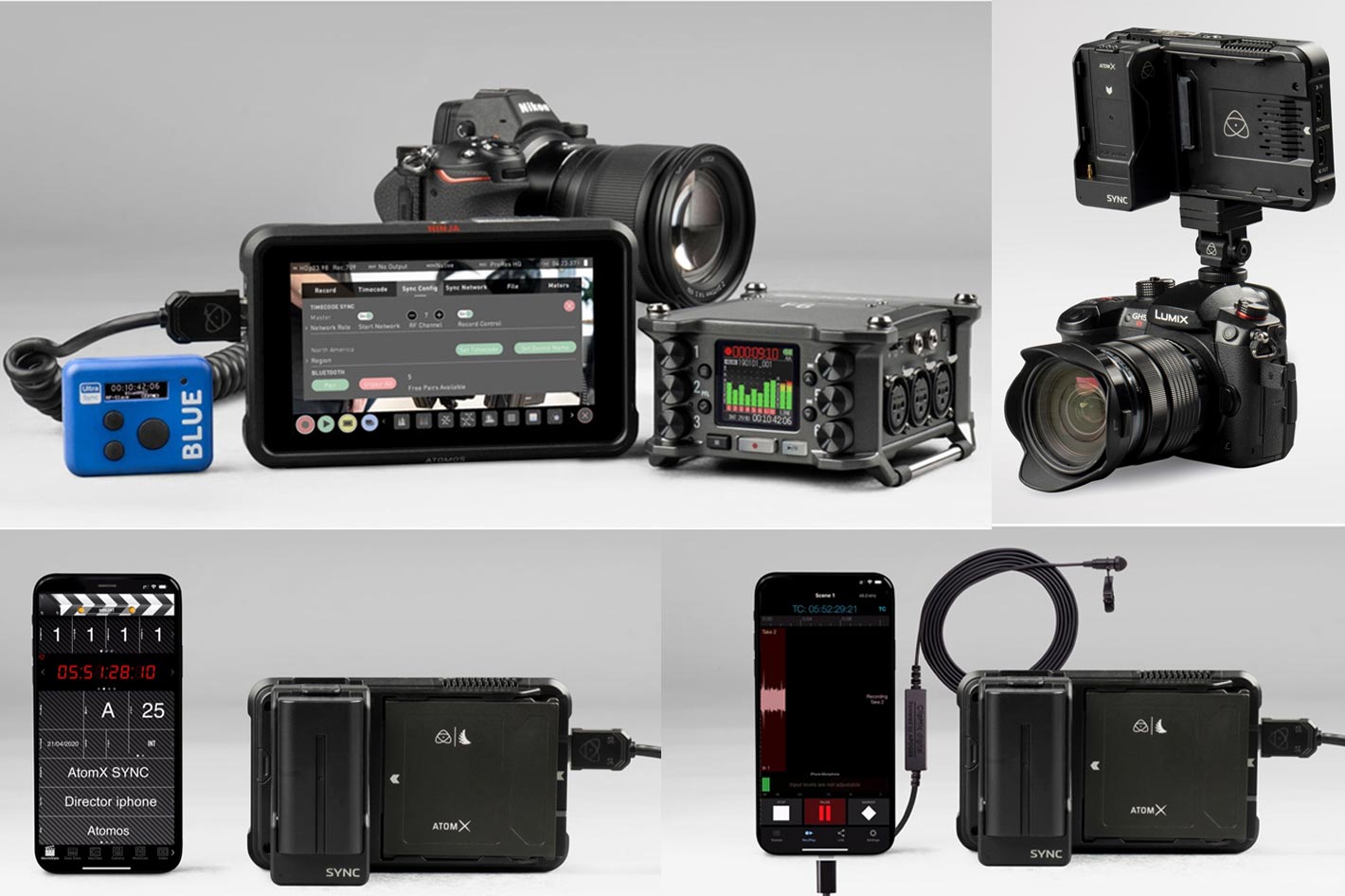 When joining forces, it was said that the Timecode Systems wireless sync standard would not only feature across the next generations of the entire Atomos product range but will also be packaged as a free SDK for third-party manufacturers. As a result, existing Timecode Systems and Atomos customers can expect to unlock even greater value from their current systems from this collaboration. The AtomX Sync module for the Ninja V and the Neon series of monitors will be the first Atomos products to feature integrated Timecode Systems technology.

Atomos is now shipping the new AtomX SYNC module which brings wireless timecode, sync and control technology to the Ninja V HDR monitor-recorder. Available in early May, the module clips in between the Ninja V and your battery using the AtomX expansion system. It connects multiple AtomX SYNC-equipped Ninja Vs with cameras and audio recorders using reliable long-range RF wireless technology patented by Timecode Systems. At the same time, it can bring other devices into the synchronized system via in-built Bluetooth. On iPhone and iPad this works with apps like Apogee’s MetaRecorder audio recorder, Mavis Pro camera and MovieSlate8 logging. It is also compatible with professional audio recorders like the Zoom F6 and F8n. 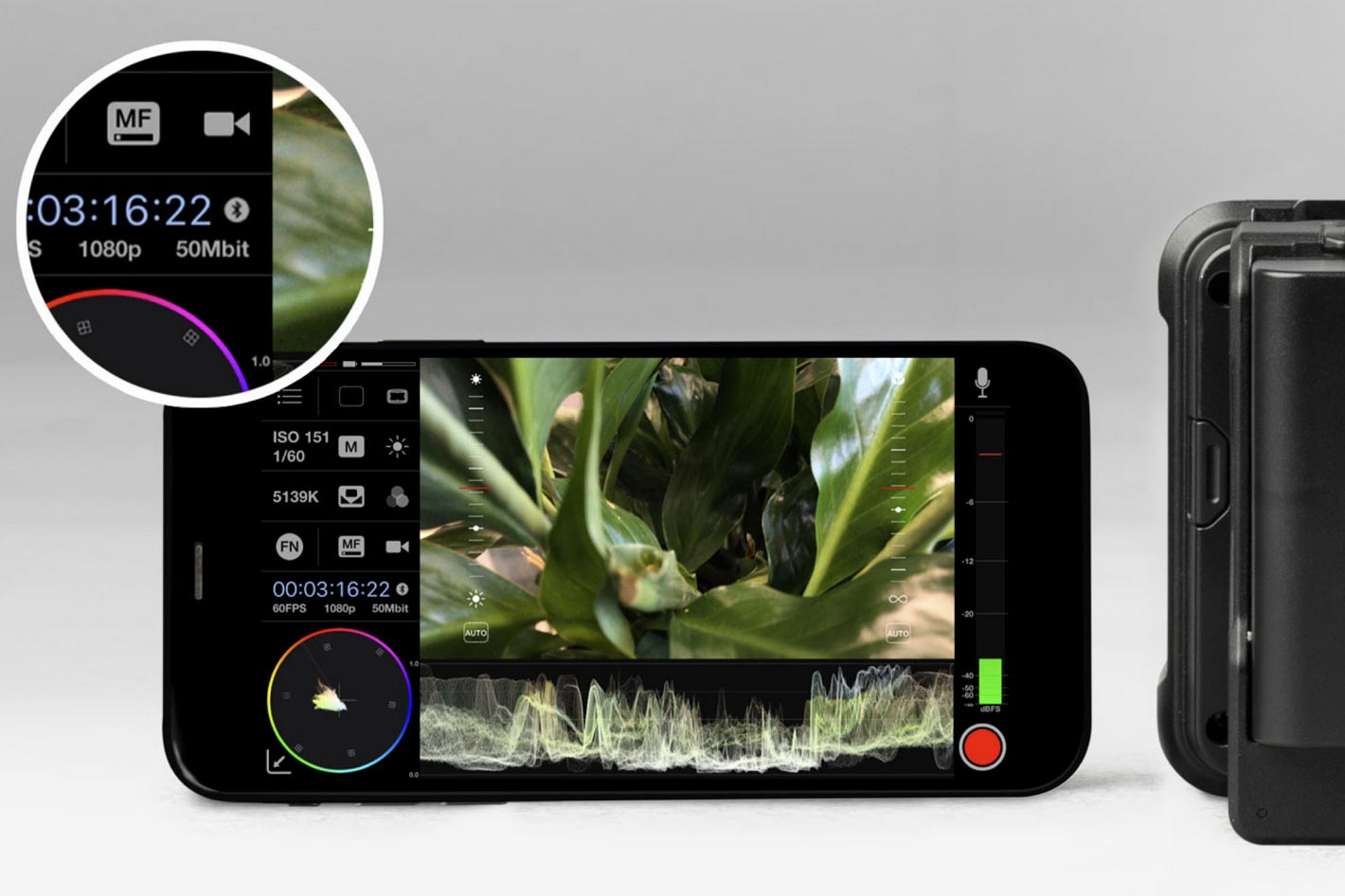 Use AtomX SYNC to bring your HDMI camera into a professional multi-camera production, says Atomos, “then have all footage instantly synchronized when coming to edit it – no more time is wasted trying to align clips or running additional software. AtomX SYNC module guarantees the user’s video and audio sources all match up perfectly every time.”

Using the same robust RF technology proven in Hollywood and used on major motion pictures, Ninja V users can now connect multiple AtomX SYNC-enabled units to form a single network over distances of approximately 200m. This allows users to get frame-accurate control of start/stop and timecode, all touch-controlled from a master Ninja V. Not only will each file recorded be perfectly synced, but they will all be exactly the same length too. The Master Ninja V is also able to synchronize with any number of existing Timecode Systems sync devices, which allow connection to other cameras, sound mixers and sources. 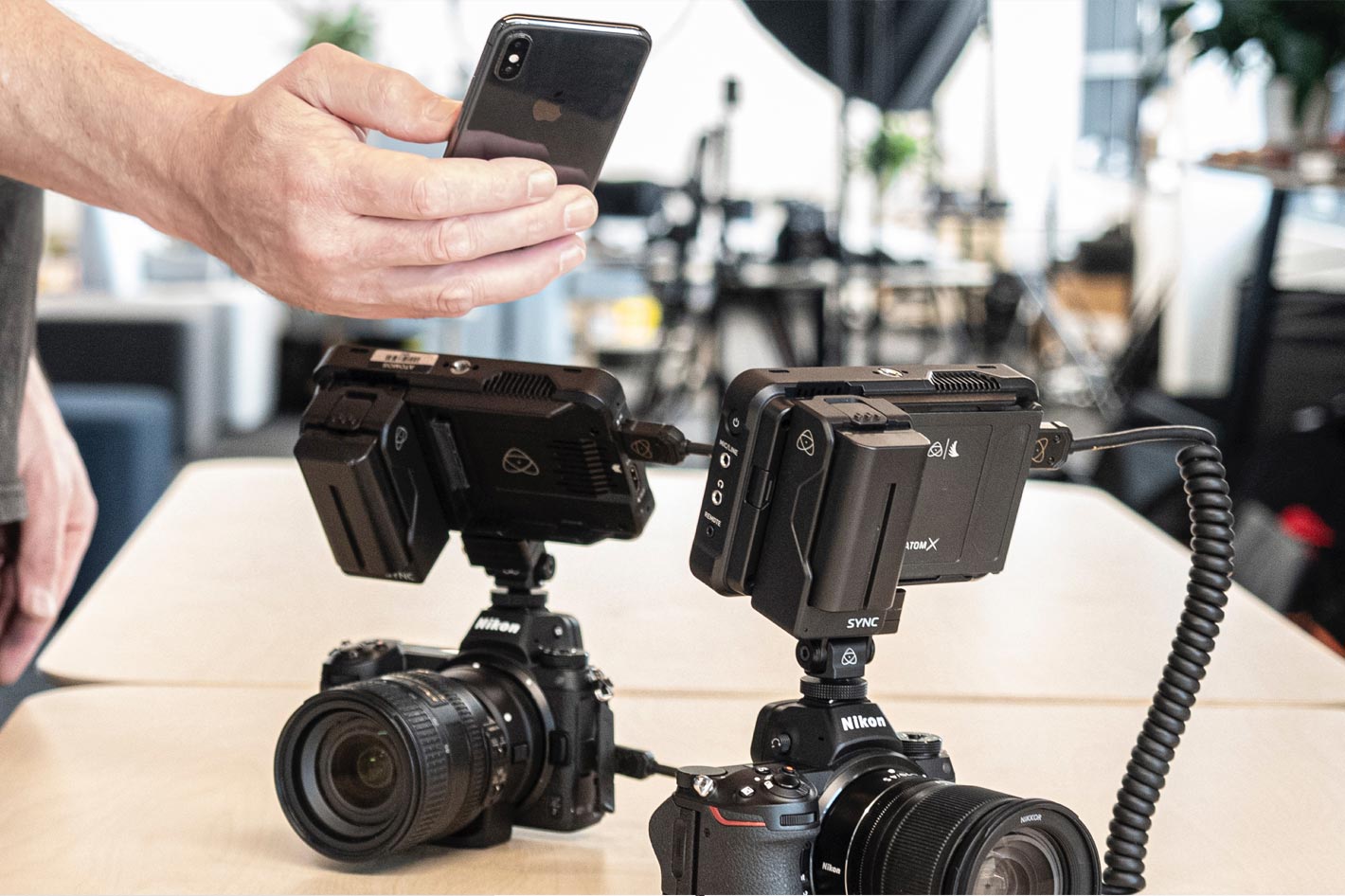 In addition to using RF technology, each Ninja V on the network can also guarantee accurate sync via Bluetooth Low Energy (BLE) to additional devices. This has a shorter range of between 10-15m line of sight and is designed so users can add up to 6 iOS devices to each AtomX SYNC module. Compatible applications include the popular iOS Mavis Pro video camera app, the Apogee MetaRecorder iOS-based pro audio recorder app, MovieSlate8 Pro advanced timecode slate and content logging app, and free iOS timecode slate app UltraSync Blue Slate.

Operating within the RF network all AtomX SYNC units communicate directly with the master. When a device goes out of range it maintains time accurate clock for as long as possible using its internal processor. Once the unit comes back into range of the network it seamlessly rejoins it. This makes AtomX SYNC perfect for multi-cam large event, sports and venue coverage.  Also important is that the module offers continuous power to your Ninja V. With a small battery inside it also acts as a hot swap continuous power battery extender, allowing you to keep your Ninja V running for approximately 5 minutes while you change the main battery. 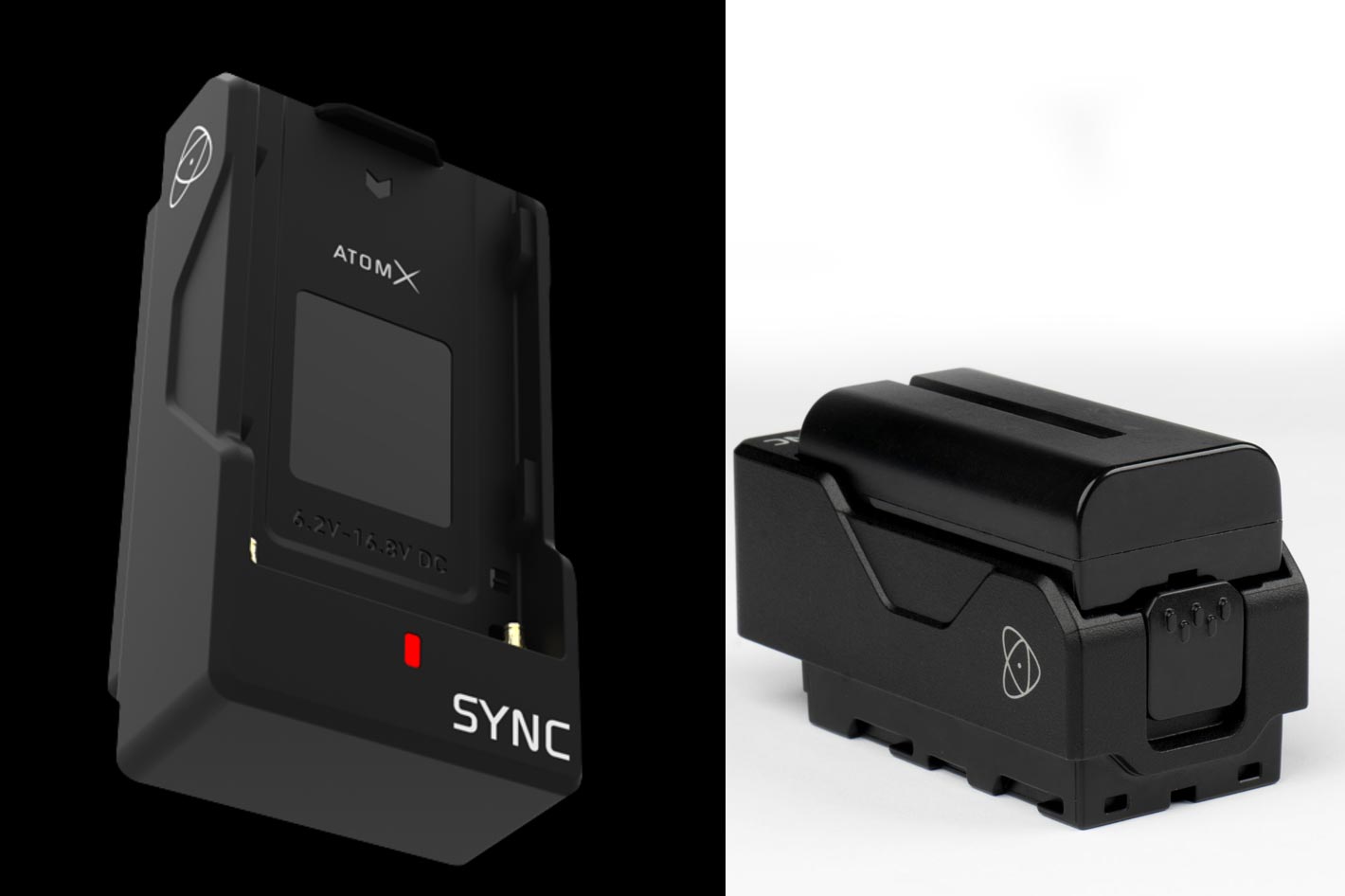 Atomos has made it even easier to combine HDMI video with audio from an external source running directly into the recorder’s mic input. Until now, users have needed to set up an audio off-set delay in their Ninja V menu. This was a case of trial and error to get perfect lipsync between the two sources. Now, the AtomX SYNC can calibrate this for you automatically. It works out the difference between the HDMI embedded audio and the external audio input for your specific camera setup. The process takes less than 2 seconds and once done there is no more guessing or lipsync error.

Paul Scurrell, Head of Product Management at Atomos and former CEO of Timecode Systems, said: “The Atom X SYNC for Ninja V is a really exciting and unique product. It offers the user a super-simple way of producing more engaging content using multiple camera angles, separate sound or even shooting pro content on your iPhone. The robust wireless connectivity between the AtomX SYNC modules and other Timecode Systems products transforms the Ninja V into an intelligent connected powerhouse device. This is the glue to a truly connected multicamera solution.”

The Atomos AtomX SYNC module will be available in early May 2020 for $149/€149 from authorized Atomos dealers.  Along with the AtomX SYNC module the Ninja V will require updating to the free AtomOS 10.4 to access these advanced features.