Now with even fewer big vendors to draw attendees, it begs the question of why even bother to carry on with the show? Will anyone who isn’t forced to actually attend?

I was pretty diligent last year making posts here on PVC as the big vendors began slowly dropping out of NAB Show 2020 as the pandemic was taking hold of the US and the world. There was Adobe, and Avid, both bailing on NAB Show last year among many others that eventually caused the cancellation of the 2020 show. It was understandable.

Here we are in the fall of 2021 and the NAB Show is scheduled to take place October 9 – 13. But it is doing so without most of the major vendors. At least the ones many of us go to see. Many companies, including Adobe and Avid, never signed up for this fall NAB 2021. Most of those big vendors that did have a booth have dropped out. All the major camera manufacturers such as Sony, Canon and Panasonic were set up to attend but have canceled their plans. 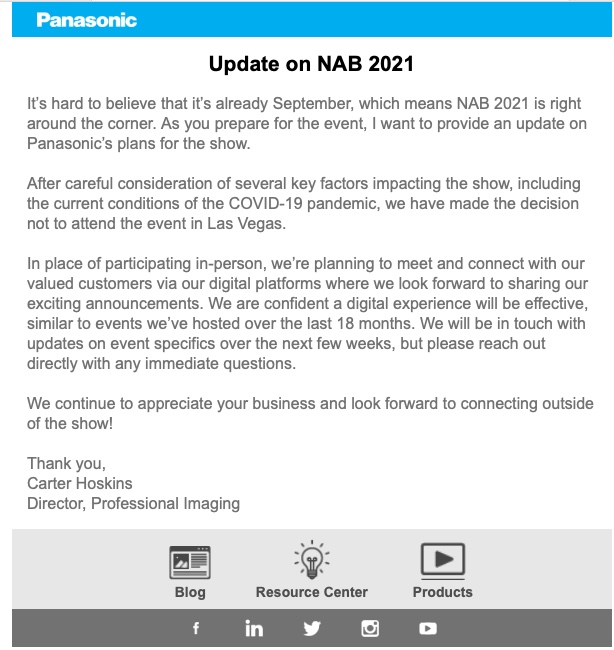 Blackmagic, who always have the biggest booth, haven’t announced specifically they are out but they are no longer on the exhibit map and Hollywood Reporter have reported BMD is not attending. BMD’s big booth was still on the NAB show floor map a week or so ago. I reached out for official clarification from BMD and have been told that indeed, they have withdrawn from NAB Show 2021.

While Blackmagic Design won’t have the big booth at NAB Show 2021 there will be a big booth for FMC’s Resolve training. But will there be anyone there to take it?

This begs the question of why even try to shoehorn a fall Las Vegas NAB show into the year when COVID numbers are still high, travel restrictions are still in place around the world, and a scan of the exhibit map reveals a lot of available booths. Date equity isn’t important here since April is the usual NAB Show timeslot and it has already been announced NAB will return to April next year.

Now with even fewer big vendors to draw attendees, it begs the question of why even bother to carry on with the show?

While many of the companies who are currently attending or had planned to attend usually send a large contingent from overseas, word on the street was that many of them were just going to use a lot of resellers and people local to the US to fill their booth. Now with even fewer big vendors to draw attendees, it begs the question of why even bother to carry on with the show? It almost feels irresponsible to hold the show at this point since that will require many people to travel and force them into situations they wouldn’t normally be in during a g if NAB Show wasn’t happening. There is a worldwide pandemic going on after all.

Ross had a number of new product announcements planned for NAB Show and these will now be shared as part of our Ross Live series of online broadcasts.

Thankfully NAB has a health and safety page that is being kept up to date with the latest vaccination and masking requirements. Such as:

NAB requires full vaccination of all attendees, exhibitors and NAB staff participating at the 2021 NAB Show and its co-located events the Radio Show and Sales and Management Television Exchange (SMTE).

Proof of full vaccination is needed to enter the events. According to the Center for Disease Control (CDC), a person is considered fully vaccinated:

And what about masks?

The decision on mask requirements will be made at a later date, closer to the start of the Show, and will be in accordance with requirements set by the CDC, the Governor of Nevada, the Southern Nevada Health District and the Clark County Commission.

NAB will continue to monitor and update our mask policy should requirements change closer to the date of the Show.

So that’s where we stand. I’m sure NAB has at least some idea of how many or how few folks are planning on attending. While the conversation of trade show relevance has raged for a few years now I think regular NAB attendees will be raring to go back once the pandemic is under control. There is still an electricity in the air at the show, both on the show floor and at the many events of the week. People enjoy being there. Probably just not in a pandemic.

All that said, Cine Gear Expo is scheduled to kick off in LA late next week so who knows what is the right thing to do anymore. 🤷‍♂️