There is a special fascination for stills that show some kind of animation, cinemagraphs, as are usually called those exercises of magic. One photographer wants to make the process easy in Photoshop. 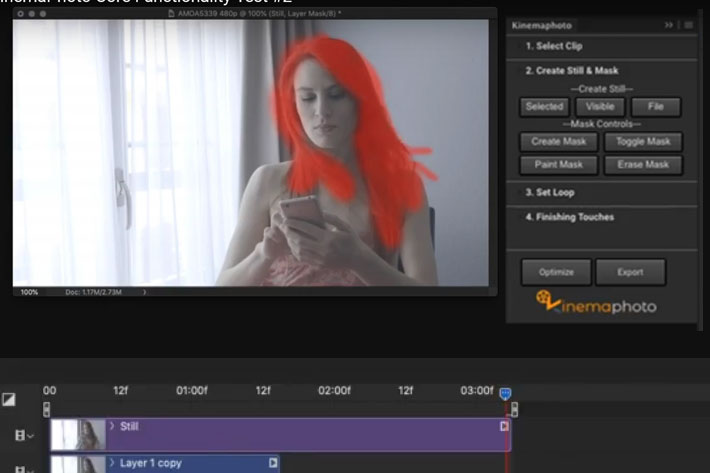 Launched on Kickstarter, the KinemaPhoto project is a Photoshop extension that takes advantage of Photoshop’s video editing capabilities to develop cinemagraphs quickly. Discover it now!

Tired of having to deal with the complex process used in Photoshop to create stills with animation on some details – cinemagraphs is the usual name given to the magic – Kofi Kumi, a San Francisco based photographer and cinematographer, decided to create KinemaPhoto, the first Adobe Photoshop Extension to take advantage of Photoshop’s video and photo editing capabilities to develop cinemagraphs quickly.

The campaign, now launched on Kickstarter, has a $ 17,000 goal and 29 days to go, until the end of November, and I sincerely hopes it reaches its goals, even if I am not going to be able to use the program. In fact, KinemaPhoto is designed as an extension to Photoshop CC, which I don’t use, so I will not be able to reap the benefits of what looks like a nice interface to transform the process into something more human. But more on this aspect close to the end of the text, as I’ve exchanged some emails with Kofi Kumi about his project and his ideas for the future.

Let’s look at KinemaPhoto, an extension for Photoshop CC and understand what made the author believe it’s a good idea. Kofi Kumi has been based in San Francisco for over 10 years and is the owner of Amoa Photography. He fell in love with his first cinemagraph back in 2011 and has never looked back. From tutorials to his own experiments, Kofi has tried everything he can, related to animated photographs.

The KinemaPhoto extension is designed to support a standard cinemagraph creation workflow which includes trimming a video, creating a still photo to mask, and looping video. Using KinemaPhoto workflow within Photoshop will make it faster and easier to create cinemagraphs without purchasing additional software.

The core feature set of KinemaPhoto is as follows: 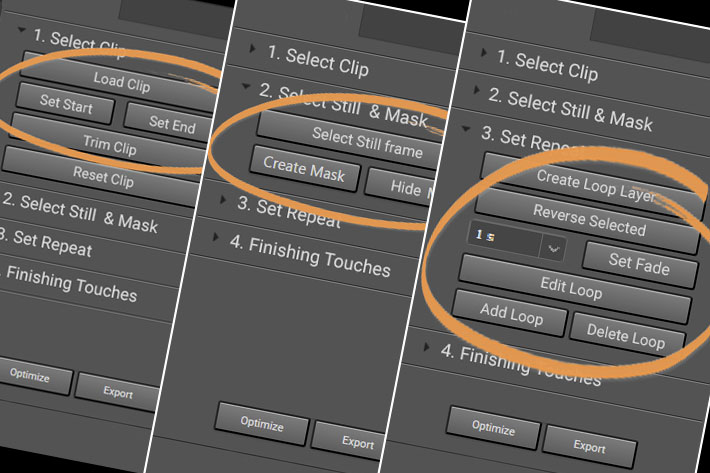 The KinemaPhoto Extension will be compatible with Adobe Photoshop CC 2018 and 2019, and be available for MAC OS X 10.12+ and Windows 10. The price for the extension starts at  $25 for the Beta Testers, or $39 for the Early Backers. The Extension has a target delivery date of February 2019.

KinemaPhoto takes advantage Photoshop’s video and photo editing capabilities to develop cinemagraphs quickly, and what it does, in fact, is to create a user-friendly interface that makes it easier for anyone to go through the different steps needed to create animated images. From the demonstration I saw, the process is, to a certain extent, similar to what the Cliplets program from Microsoft Labs does, but while Cliplets is not a finished product, more an experiment, KinemaPhoto aims to be a commercial product, one I would immediately buy… if it was compatible with other photo editors. But it isn’t.

Obviously, the KinemaPhoto extension uses the video features present in Photoshop to create its magic, and here it differs from Cliplets, which is a standalone program able to ingest video files from which to create the cinemagraphs. Using Photoshop’s video features and timeline is an asset, but also a limitation, because it means that the version of KinemaPhoto now being developed can not work with editors as Affinity Photo or ON1 Photo RAW, as neither of those have video editing capabilities.

Committed to create the tool

Kofi Kumi says that he envisaged the option to develop “an entire plug-in, which essentially would be a separate software package” that would make KinemaPhoto compatible with other products, but for now “decided it was better for me to invest in the extension first, see how the market works there, and then consider expanding to a full software package.” So, it all depends on what happens with the Kickstarter campaign.

After talking with a few developers, Kofi decided to partner with one to help him create the Adobe Photoshop Extension on a reasonable budget. The photographer says that “no matter what, I am committed to developing this tool to create cinemagraphs quickly (and work through my personal backlog). It would be great for the rest of you to join me as well in this journey so that you can also create your cinemagraphs. Quickly.”

One final note: the cinemagraphs published on the Kickstarter campaign page do not reveal the quality  present in cinemagraphs. To see the original cinemagraphs as the author created them, follow the link close to each image published. It will take you to the web site gallereplay, where Kofi Kumi has some of his work. Cinemagraphs!