Canon screens at NAB 2015 two short films, “Trick Shot” and “Battle of the Ages” to show the power of their new 4k cameras. 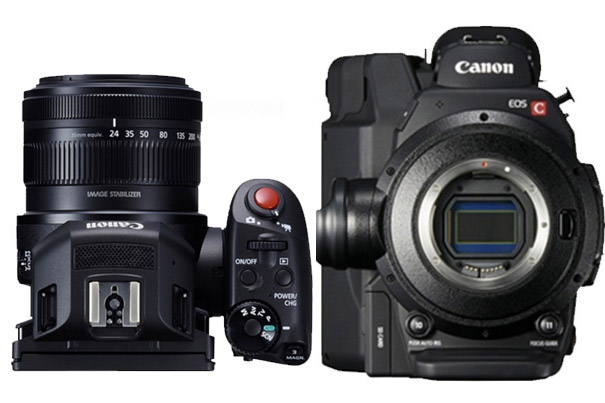 The two shorts premiered in Las Vegas are an example of the potential of the new cameras and also of some of the newest Canon gear, but they serve one purpose no one should forget: give use better stories through moving images. Both films will screen daily in true 4K at the 2015 NAB Show in the Canon Theater.

“Trick Shot,” directed by Evan Kaufmann with cinematography by Gale Tattersall (Grace and Frankie, House M.D.), is a classic con movie with a twist. Reformed pool shark “Eight Ball” Bobby is forced to play one more crucial billiards game to save his son Devon, who got mixed up in the wrong crowd. Shot on location in Nevada, Tattersall utilized the EOS C300 Mark II camera to capture the menacing darkness of a seedy pool hall, the stark beauty of the barren desert, and the tense drama of a clever heist film.

“The new sensor in the Canon EOS C300 Mark II is a game changer,” said Tattersall. “The 15 stops of dynamic range and cinematic quality put this camera in the big leagues.”

Mounted with Canon’s new CINE-SERVO 50-1000mm T5.0-8.9 Ultra-Telephoto Zoom lens, the camera produced an incredible tracking shot of a speeding car from more than two miles away. Yet when the script called for aerial photography, the camera easily transitioned from sticks on the ground to propellers in the sky. Flying with a Canon EF 24mm 1.4L II USM lens on the Aerigon, a professional cinema drone from Intuitive Aerial Inc., the camera captured the vast landscape of Valley of Fire State Park.

“The small form factor makes it wonderful to move around very quickly,” Tattersall noted. “It took seconds to go from handheld to drone to Steadicam to jib arm to studio mode. The EOS C300 Mark II is absolutely one of the most versatile cameras I’ve come across.”

Tattersall also had the XC10 camcorder in his toolkit. The 4K fixed-lens, video-and-still-shooting hybrid served as a point-of-view camera, which the filmmakers put through its paces by mounting it under cars and on pool cues.

Tattersall added, “I like the XC10 camcorder enormously. It’s a true 4K camera that creates beautiful images in one tiny form factor.”

“Battle of the Ages” shot entirely on the XC10 4K digital camcorder, is an action-packed comedy from YouTube filmmaker Scott Winn, whose channel, ScottDW, has amassed more than 59 million views. Riffing on the 1980s crime drama trope, “Battle of the Ages” features two young thugs who learn the hard way that appearances can be deceiving and age is nothing but a number. Scott captured his fearless cast of three professional parkour athletes through an exhilarating chase and an epic fight scene with the XC10 camcorder mounted on a Freefly MōVI M5.

“While we love epic, extreme adventures, we prefer to keep the crazy on screen and away from our camera crew,” said Winn. “The XC10 camcorder worked perfectly out of the box. And, the image this tiny, lightweight camera produced is larger than life. I know my work will look great if it is streaming on the small screen of someone’s phone or projected in true 4K in a massive theater.”

To capture the action from every angle, Scott teamed up with Helivate Films’ Zac Eskelsen to fly the camera above Salt Lake City’s skyline. They mounted the XC10 camcorder on a DJI Spreading Wings S1000 drone with a MōVI gimbal to get the bird’s eye view. Read Zac Eskelsen’s opinion about this first experience with the XC10.

“We love what we were able to accomplish with this camera from above, these shots add a dynamism to our film that was shot in one day with a small crew,” said Winn. “The sky is the next frontier for filmmakers, and this camera puts quality drone work within reach for every creator.”

Following NAB, the films and their accompanying behind-the-scenes featurettes will be available on the Canon U.S.A. website. “Battle of the Ages” will also be available in streaming 4K on the ScottDW YouTube channel.

One really cannot beat the speed of a B4 lens on a 2/3-inch sensor. If you have worked in...

Working from home, or in my case working in my garage, I talked to Larry from Canon about the...