The plugins feature numerous enhancements for working with stereoscopic material

emotion3D is proud to announce the immediate availability of the second version of its award-winning suite of plugins for Adobe After Effects. The Stereoscopic Suite X2 for Adobe After Effects features numerous enhancements for working with stereoscopic material, bringing capabilities to the Adobe After Effects platform that were previously only available on turnkey systems costing tens of thousands of dollars more. New functions available in the SSX2 include automatic stereoscopic geometry corrections, improved disparity map generation and depth budget adjustment, depth transitions for reduced eye strain between cuts of differing depth, and new visualization tools and specialized plugins for a more efficient stereoscopic workflow. In addition to new functions and workflow, SSX2 includes quality improvements to its unique Stereo-to-Multiview conversion feature for repurposing stereoscopic material for glasses-free (auto-stereoscopic) content delivery platforms. 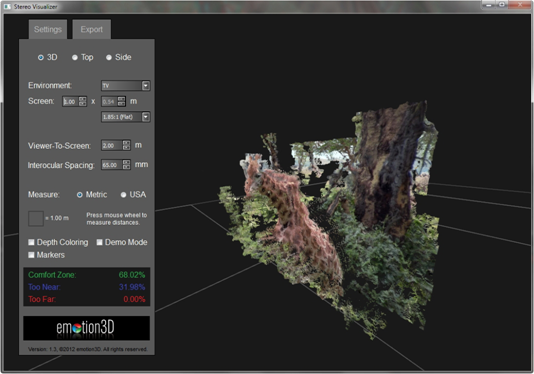 Key features of the SSX2 include :

Powerful yet affordable stereoscopic tools are increasingly in demand as an industry-wide decline in budgets contrasts with the high quality requirements for stereoscopy in order to ensure viewer comfort. With a ubiquitous host such as Adobe’s After Effects, emotion3D sees significant opportunity for small to mid-size production and post-production to compete for stereoscopic projects, without major investment in hardware and software. The large number of artists already familiar with After Effects means easier access to artists and less training for those new to stereoscopic workflows, all of which in turn reduces the upfront costs for post-production facilities.

Immediate Availability
emotion3D’s SSX2 plugins are available for download on the emotion3D website www.emotion3d.tv. Pricing is set at €7795 per license, with annual support and maintenance contracts available by contacting emotion3D atsales(at)emotion3d.tv or via emotion3D’s worldwide network of system integrators.