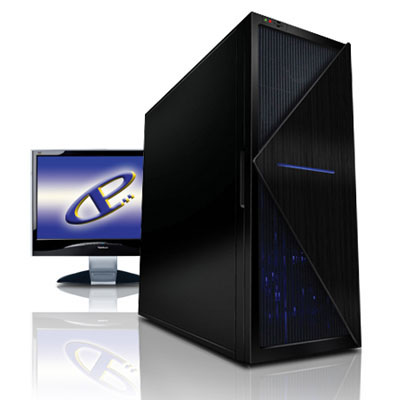 CyberPower teamed with NVIDIA to deliver an advanced system that meets the needs of today’s most demanding graphics environments. The NVIDIA Quadro NVS 420 x16 PCIE is a quad-display business graphics solution. It is capable of supporting up to four 30-inch digital displays at 2,560 x 1,600 resolutions via DisplayPort / dual-link DVI. The Quadro NVS 420 includes advanced display software technology, which enables features such as profiles, extended Windows taskbar, gridlines, and virtual desktops. It also features 512MB of memory, 11.2GB/sec (per GPU) of memory bandwidth and a CUDA Parallel Computing Processor.

The Power Mega 1000 offers stability, ease-of-use and has been tested for wide compatibility with the leading business, graphics and CAD applications. This advanced performance workstation is perfect for 2D and 3D professional applications, professional and home animation, matte painting, compositing, CAD/CAM, modeling, and graphics rendering.

The Power Mega 1000 has a MSRP of $1469. It can be customized with numerous component options including a wide range of displays to complete the system. All CyberPower computer systems come with a 3-year warranty and toll-free life-time technical support.

CyberPower Inc. www.cyberpowerpc.com was founded in 1998 and has emerged as one of the leading custom computer system manufacturers. Headquartered in Baldwin Park in Southern California, CyberPower manufactures and distributes a complete line of custom built gaming machines, notebook systems and high performance workstations to meet the unique needs of gamers, businesses, government agencies, educational institutions and other end-users. For more information contact: Sales (800) 707-0393; Email [email protected]