Apps are generally considered as programs that use the power of a smartphone to put in pocket form tools that otherwise we would not be able to carry. But some apps, like Close-Up are educational tools. 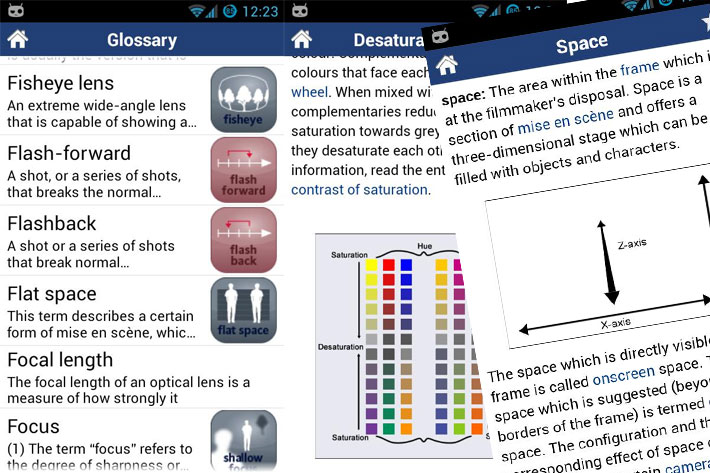 Ideal for film students or a seasoned director trying to refresh his or her memory, Close-Up has more than 370 linked entries for film studies, graphs, notes on techniques. It’s a film glossary in pocket-size!

Apps are, generally, educational tools, because even when they are used to calculate exposure settings or choose a diffusion filter, they allow us to learn something. But we rarely think of apps, like those we’ve covered in recent weeks, as pure educational tools. This week is different, though, as we explore Close-Up, available for iOS and Android, a program created by the German non-profit organisation ‘Neue Wege des Lernens e. V.’. 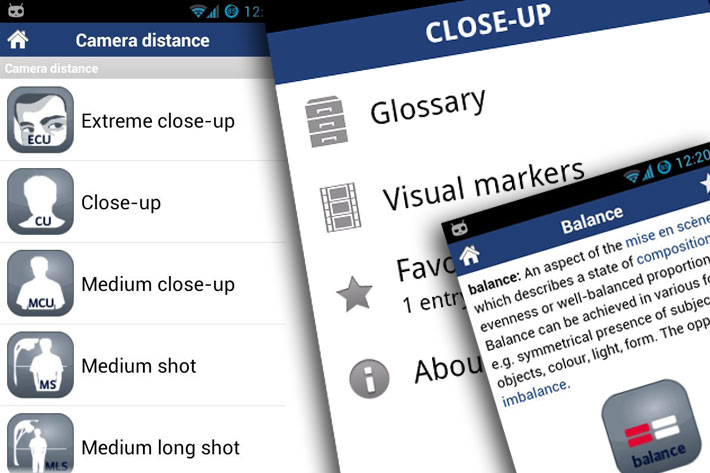 The organisation, which supports schools in digital learning initiatives, has, according to the information on its website, “a particularly strong commitment to supporting cultural Film Education with digital tools”, and the app Close-Up is the result of that interest. Close-Up  provides clear and concise definitions of essential film language terms used in basic and advanced film courses.

Close-Up Film Language (the complete name of the app) was conceived for use in high school (particular sixth forms) and higher education, but the glossary is appropriate for anyone generally interested in cinema, film and film analysis. The Close-Up Film Language Glossary contains a unique collection of ‘Visual markers’, which are visualizations of filmic means and techniques. Groups of visual markers – Mise en Scène, Lighting style, Lens type, Focus, Camera distance, Editing, Transitions and many others –  provide a quick and comprehensive overview of important categories of film language. Additionally, a collection of useful checklists helps you analyzing the different aspects of film language in classroom study or when writing a film studies essay. 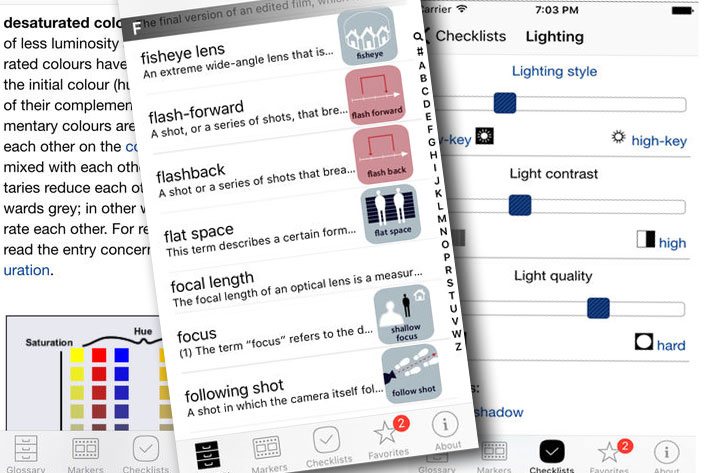 The Close-Up Film Language Glossary places particular emphasis on the topics composition and color in movies. With more than 370 linked entries for film studies, 80 unique Visual markers which visualize the core ideas of filmic means and techniques, a collection of 17 checklists and counters that support a formal analysis of film excerpts or motion stills available for In-App-Purchase, Close-Up allows users to store their favorite or essential terms for fast access and has a fast and comprehensive search function that provides easy access to the technical terms (even if only a part of a technical term is known).

A clean, uncluttered interface, no internet connection required and the fact that it is free, make Close-Up one app to consider installing. The iOS version, 2.5.0  was updated December 2017, with support for iPhone X and iPad Pro. The Android version, 1.2.0, was last updated in 2016. There is also a version for iOS and Android in the German language, under the name Filmsprache.