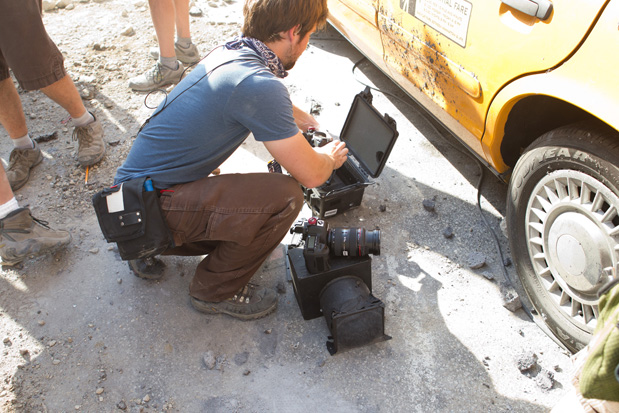 Canon U.S.A., Inc., a leader in digital imaging solutions, is proud to announce that its EOS 5D Mark II and 7D Digital SLR cameras have been used on the set of Marvel’s latest movie, “Marvel’s The Avengers,” to capture thrilling point-of-view (POV) action shots that can be seamlessly intercut with footage from the film’s principal 35mm and digital cinematography cameras to heighten the film’s visual impact. “Marvel’s The Avengers” shows an epic confrontation between nightmarish super villains attacking the Earth and the super-heroic team of Iron Man, Captain America, The Incredible Hulk, Thor, Hawkeye and Black Widow. Directed by Joss Whedon, the film is the latest and most extraordinary Marvel Studios Super Hero movie to date.

On the set of “Marvel’s The Avengers,” McGarvey and his crew used five Canon 5D Mark II cameras and two 7D models. Using multiple cameras limited the need to re-shoot complex action scenes, and the affordability and compact size of the cameras enabled the crew to obtain ample coverage by strategically angling them from various vantage points throughout the set. “The cameras’ small size was a major advantage to us. We were able to place them in tight locations that were really close to the big stunts, which would be too risky to do with bigger cameras that would require an operator and two assistants,” McGarvey said. He was able to slide one of the Canon cameras into a sewer grating, while placing another under a pile of debris for a key shot of a car hurtling toward the lens, flipping through the air on fire.

“We are thrilled that the EOS 5D Mark II and 7D Digital SLR cameras were called to action on the set of ‘Marvel’s The Avengers.’ We designed these cameras with versatility and flexibility in mind, and their ability to record beautiful 1920 x 1080 HD video, coupled with their compact size, make them an ideal fit for filmmakers looking to capture tight action shots,” stated Yuichi Ishizuka, executive vice president and general manager, Imaging Technologies and Communications Group, Canon U.S.A.

Compact, lightweight, and compatible with Canon’s wide selection of EF Series lenses, the Canon 5D Mark II and EOS 7D digital SLR cameras are equipped with large Canon CMOS sensors and Canon DIGIC 4 image processors that enable them to record exceptional full 1920 x 1080 HD video at the user-selectable frame rate of 24p (23.976 fps), which is the standard for today’s high-end filmmaking. Additionally, the cameras’ low-light capabilities were of major importance on the set of “Marvel’s the Avengers,” as many of the film’s scenes were shot at night.

Canon U.S.A., Inc., is a leading provider of consumer, business-to-business, and industrial digital imaging solutions. With $45.6 billion in global revenue, its parent company, Canon Inc. (NYSE:CAJ), ranks third overall in patent holdings in the U.S. in 2011† and is one of Fortune Magazine’s World’s Most Admired Companies in 2011. Canon U.S.A. is committed to the highest levels of customer satisfaction and loyalty, providing 100 percent U.S.-based consumer service and support for all of the products it distributes. Canon U.S.A. is dedicated to its Kyosei philosophy of social and environmental responsibility. To keep apprised of the latest news from Canon U.S.A., sign up for the Company’s RSS news feed by visiting www.usa.canon.com/rss.

Marvel Studios presents “Marvel’s The Avengers”-the Super Hero team up of a lifetime, featuring iconic Marvel Super Heroes Iron Man, The Incredible Hulk, Thor, Captain America, Hawkeye and Black Widow. When an unexpected enemy emerges that threatens global safety and security, Nick Fury, Director of the international peacekeeping agency known as S.H.I.E.L.D., finds himself in need of a team to pull the world back from the brink of disaster. Spanning the globe, a daring recruitment effort begins.

Starring Robert Downey Jr., Chris Evans, Mark Ruffalo, Chris Hemsworth, Scarlett Johansson, Jeremy Renner and Tom Hiddleston, with Stellan Skarsgård and Samuel L. Jackson as Nick Fury, directed by Joss Whedon, from a story by Zak Penn and Joss Whedon with screenplay by Joss Whedon, “Marvel’s The Avengers” is based on the ever-popular Marvel comic book series “The Avengers,” first published in 1963 and a comics institution ever since. Prepare yourself for an exciting event movie, packed with action and spectacular special effects, when “Marvel’s The Avengers” assemble in summer 2012.

“Marvel’s The Avengers” is presented by Marvel Studios in association with Paramount Pictures. The film is being produced by Marvel Studios’ President Kevin Feige and executive produced by Alan Fine, Jon Favreau, Stan Lee, Louis D’Esposito, Patricia Whitcher, Victoria Alonso and Jeremy Latcham. The film releases May 4, 2012, and is distributed by Walt Disney Studios