If you’re about to build a new computer, it may be wise to go beyond the pure specifications of each CPU, and get the numbers from real world testing. They may surprise you! 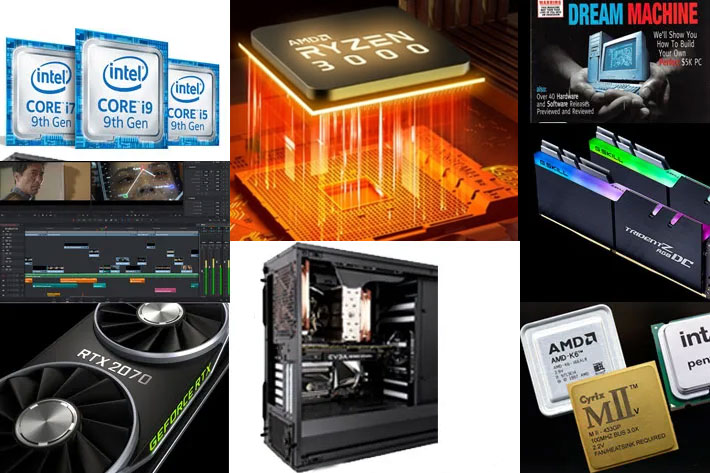 The 2019 DREAM MACHINE built around a mainstream Intel i9 9700K gives place, this year, to a solution from AMD, the Ryzen 9 3900X, which is not only impressive on specs but also in real world tasks.

One year after building a DREAM MACHINE it’s time to define what can be a build for 2020, and this time AMD wins hands-down, if you want a PC build that will last some years with little upgrading. The choice, based on building a working computer around a mainstream CPU, goes for the AMD Ryzen 9 3900X,  which is not only the first consumer x86 chip to be produced on a 7nm process node, but is an affordable solution that points towards the future, with the presence of PCIe 4.0  – to which you’ll find use in a near future – and the power of its 12 cores/24 threads.

Most tests compare the AMD Ryzen 9 3900X with the Intel i9 9900K, and the results reveal that AMD’s  processors blow Intel’s offer out of the water in most situations, making it even more important to consider these new solutions when building a new machine. Gordon Mah Ung wrote, in PCWorld, that “the Ryzen 9 3900X is likely as significant, and likely as game-changing, as AMD’s original K7 Athlon-series of CPUs that crossed the 1GHz line first…”. I remember the K7 well, as it was, with the K6, one of the reasons why I used AMD back then, and having briefly tested the AMD Ryzen 9 3900X acquired for the DREAM MACHINE 2020, I truly believe this is a game-changer. 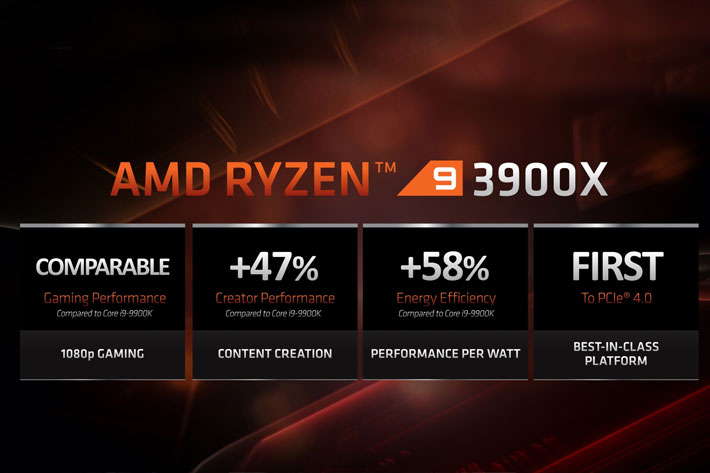 So, last year, I wrote: after doing my home work I decided I was going to buy a new Intel 9th generation processor, and chose the i7 9700K, which is to be paired with a Nvidia 2070 GPU I already have running on my actual machine. The new build is not exactly new, as I am moving my actual machine to a new motherboard  – based on the chipset Z390 –  with a 500GB SSD for OS and apps, and a mix of 1TB SSD NVMe and two 2TB HDDs. With 32GB of RAM, a motherboard that includes support for M.2 SSDs and all the other connections now available, I believe I will have a work computer, for both photography and video, that will last for quite some time. 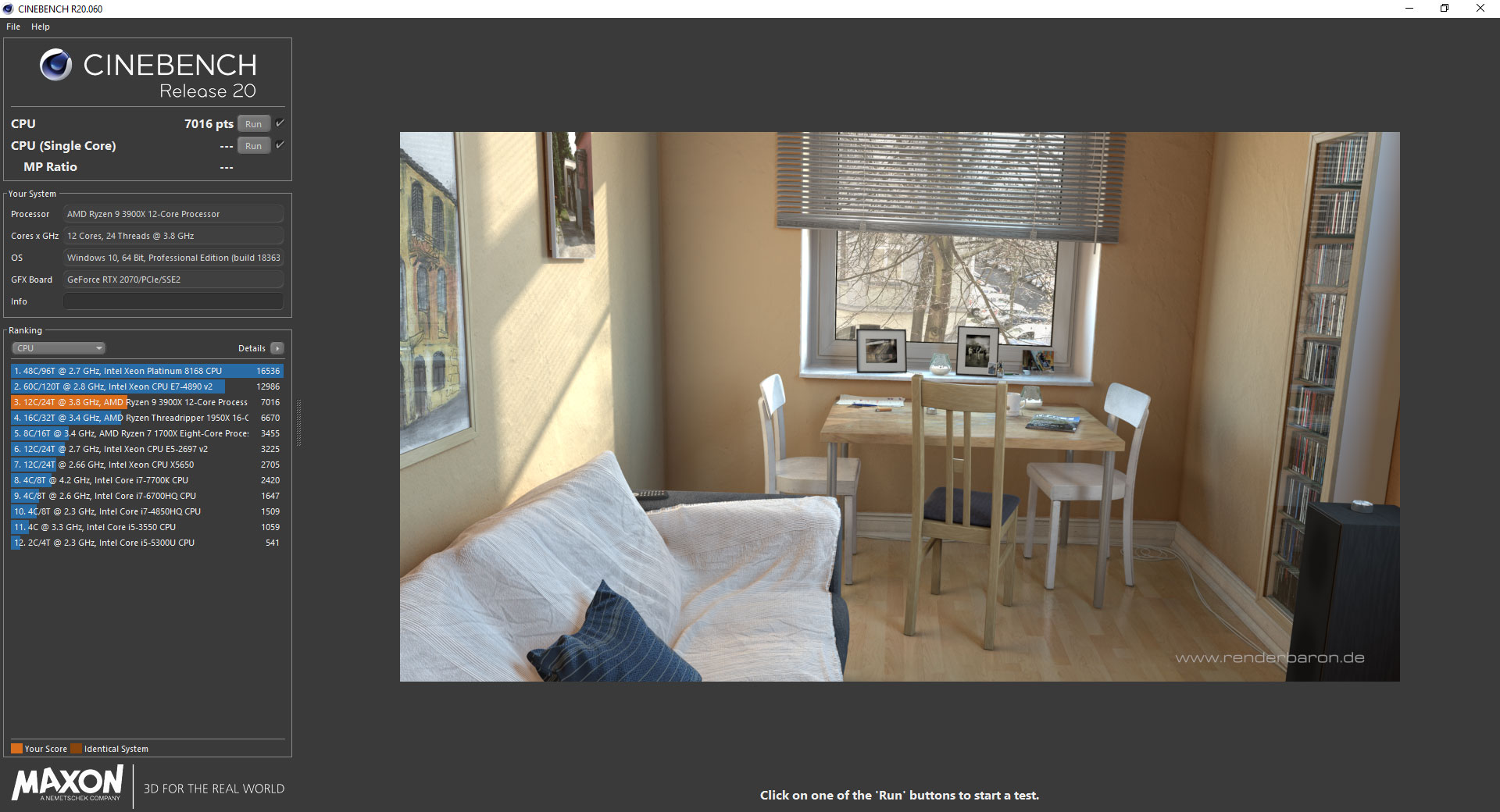 The assumption made in February 2019 around the Intel i9 9700K continues valid today, but as we decided to build a second machine, we opted to use AMD’s Ryzen 9 3900X, despite me stating, last year, that Intel has been my regular choice for new builds, and I saw no reason to change. I still don’t,  and the results of our brief test confirm what I’ve written before: when you look at real world tests, you see that there is no “overall best processor”, but simply CPUs that compete with each other and are sometimes better at some tasks and less competitive at others.

Having said that, it made sense to have a new machine with an AMD heart, because it also points to the future with its 7nm process node, and the – yet to be explored – presence of PCIe 4.0. What it means is that this new build is conceived to last for a long period of time, even if some elements, from GPU to memory, may be upgraded. It’s always something I like to consider when defining the parts to build a new computer. 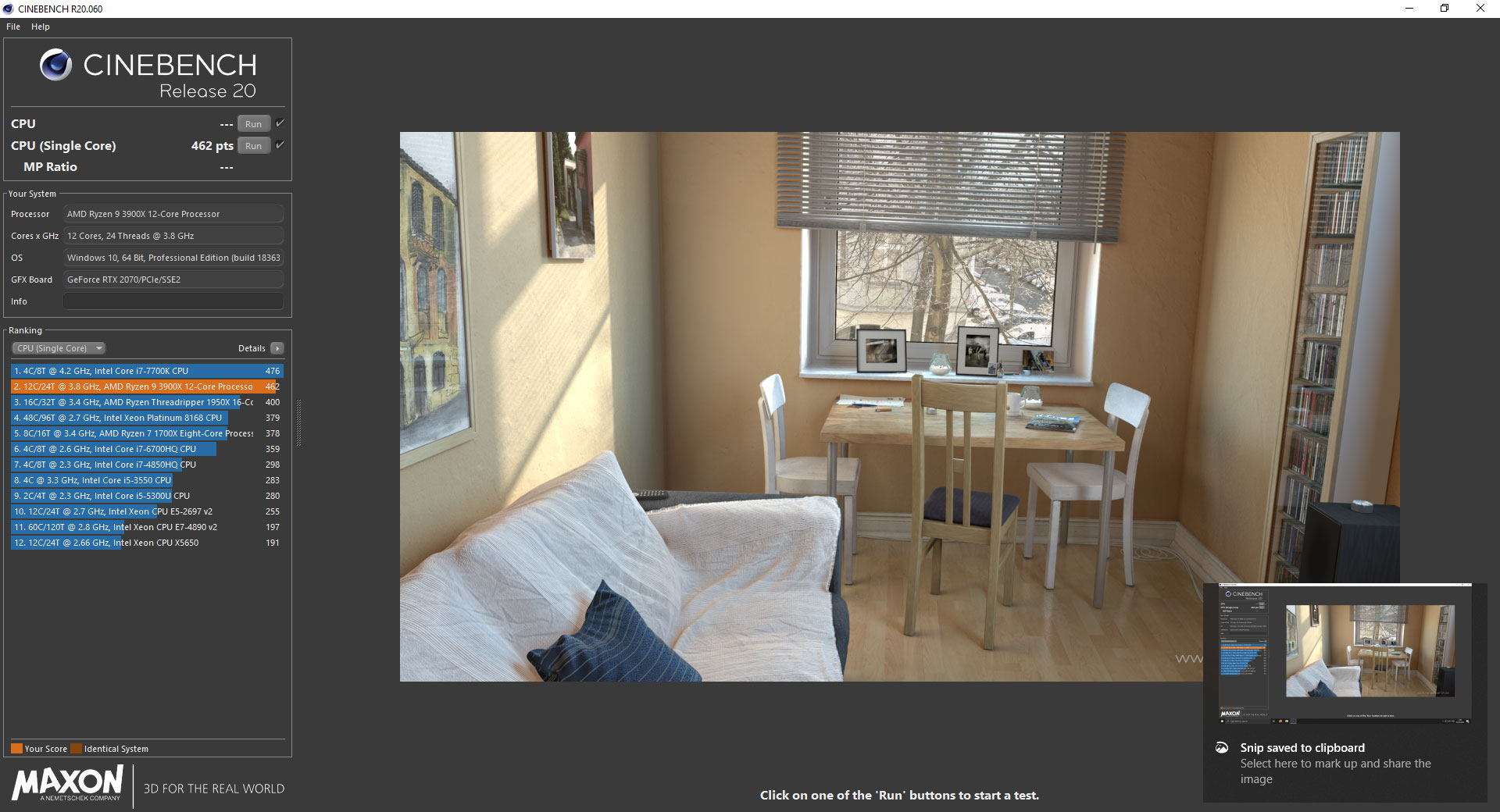 More an upgrade than a new build

This new build shares some similarities with the 2019 DREAM MACHINE, as it is not completely new, because we’re moving an existing computer to a new motherboard. We opted for an AMD X570 Aorus Pro motherboard, from Gigabyte, which is similar to the Intel Z390 Aorus Pro used on the Intel build. A NVIDIA 2070 already used in the older machine was moved to this build, which also has a 500GB SSD for OS and apps, one 1TB NVMe SSD on a M.2 connection and a 2TB HDD.

Because we used the original DDR4 memory banks, this new build only has 16GB RAM instead of 32GB of RAM, as used on the Intel 2019 DREAM MACHINE. We could expand to 32GB, but after the first tests it appears that 16GB RAM will do just fine until we decide to upgrade. At the moment the 2020 DREAM MACHINE, an upgrade that costed, in all, less than $800, is working fine, and shows, on our brief test, how faster the multi-core Ryzen can run, when compared to Intel.

When the new build was ready, we decided to do some testing, just to confirm, with our own eyes, the comments and opinions published online. It’s nothing exhaustive or scientific, for that you can either check PCWorld’s website, for general use opinions, or Puget Systems, which reflects real-world usage in a professional environment. 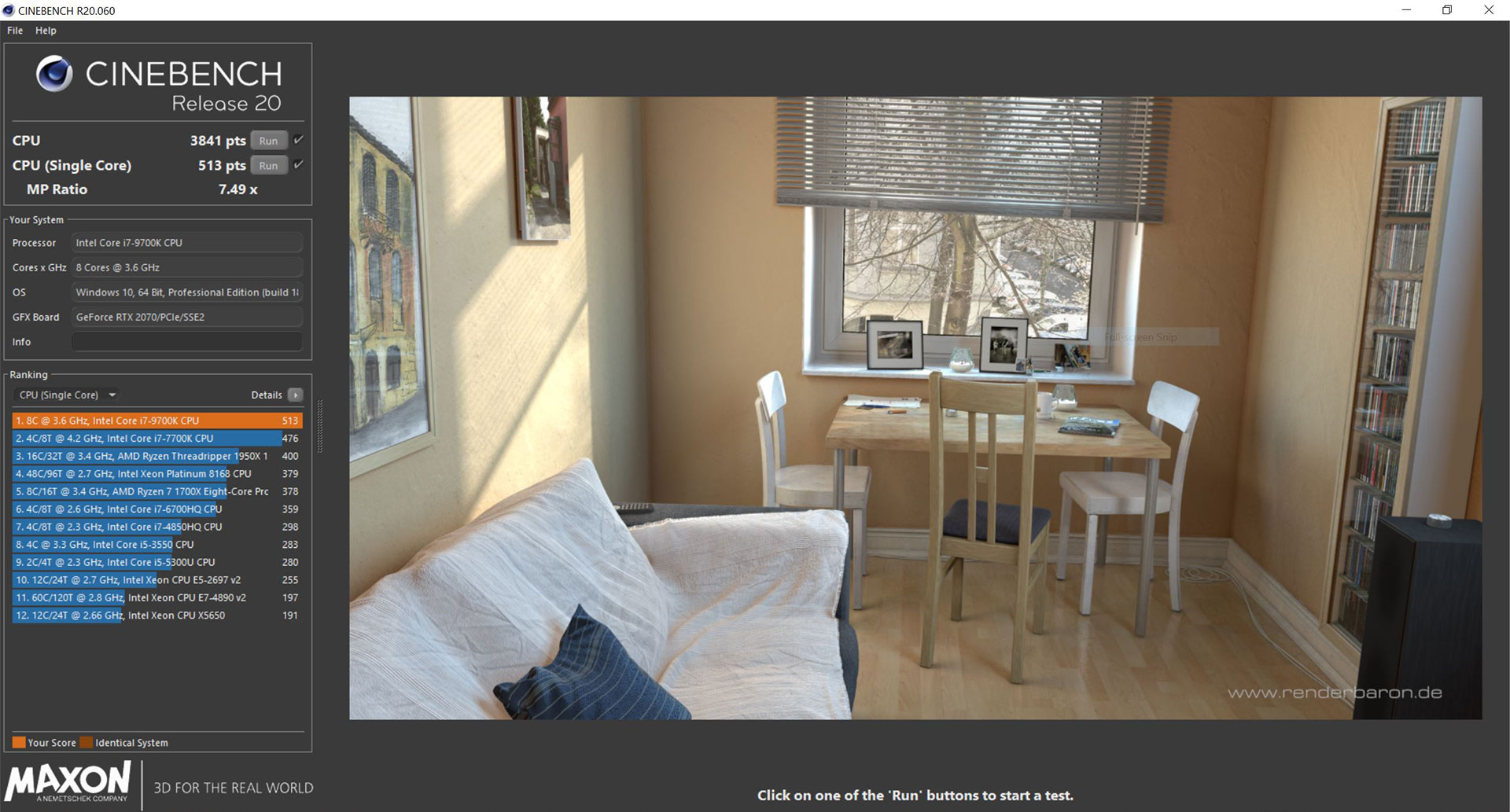 For testing we used CineBench R20, which is a FREE real-world cross-platform test suite that evaluates your computer’s hardware capabilities. Cinebench Release 20 reflects, according to Maxon, “the overall advancements to CPU and rendering technology in recent years, providing a more accurate measurement of Cinema 4D’s ability to take advantage of multiple CPU cores and modern processor features available to the average user.”

It’s important to understand that Cinebench R20 does not test GPU performance. The app provides improved benchmark accuracy for current and next-generation CPUs to test if a machine runs stable on a high-CPU load, if the cooling solution of a desktop or notebook is sufficient for longer-running tasks to deliver the full potential of the CPU, and if a machine is able to handle demanding real-life 3D tasks. 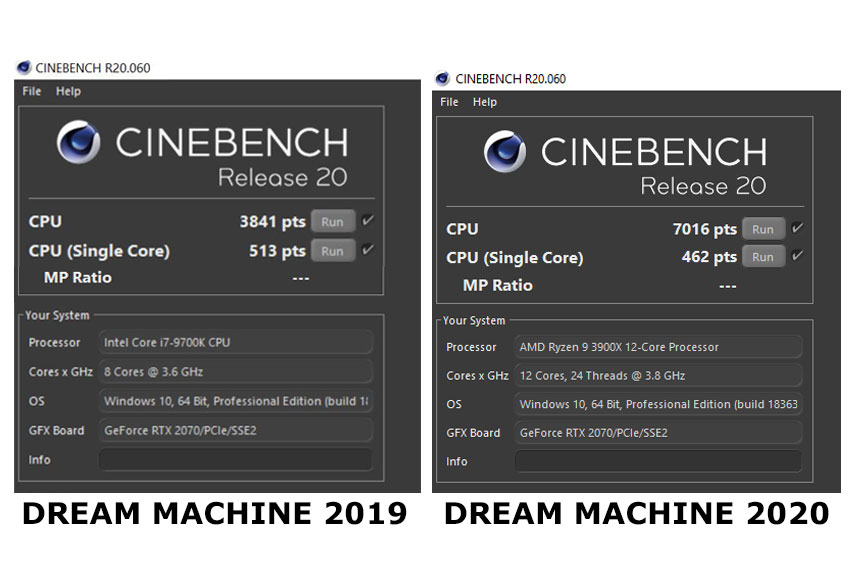 Cinebench R20 and Cinema 4D R20 incorporate the latest rendering architectures, including integration of Intel’s Embree raytracing technology and advanced features on modern CPUs from AMD and Intel that allow users to render the same scene on the same hardware twice as fast as previously.

The tests confirm what we knew and expected: when using multiple cores, the AMD Ryzen 9 3900X comes ahead, for a substantial margin, but once you go single-core, the Intel i9 9700K takes the lead. The tests also show that it’s not all about cores because, in some cases, the 8-core Intel i9 9700K fares better than CPUs with more cores and threads.

Because the graphs from Cinebench R20 offer a good idea of how both CPUs are positioned in a list of 12 CPUs, I publish them here, so readers can reach their own conclusions (click on the images to see them at a higher resolution). To explore the subject further, visit PCWorld and Puget Systems websites, where you’ll find all the info you need  to build your own DREAM MACHINE 2020. Ours is humming in the background, along with the version from 2019. 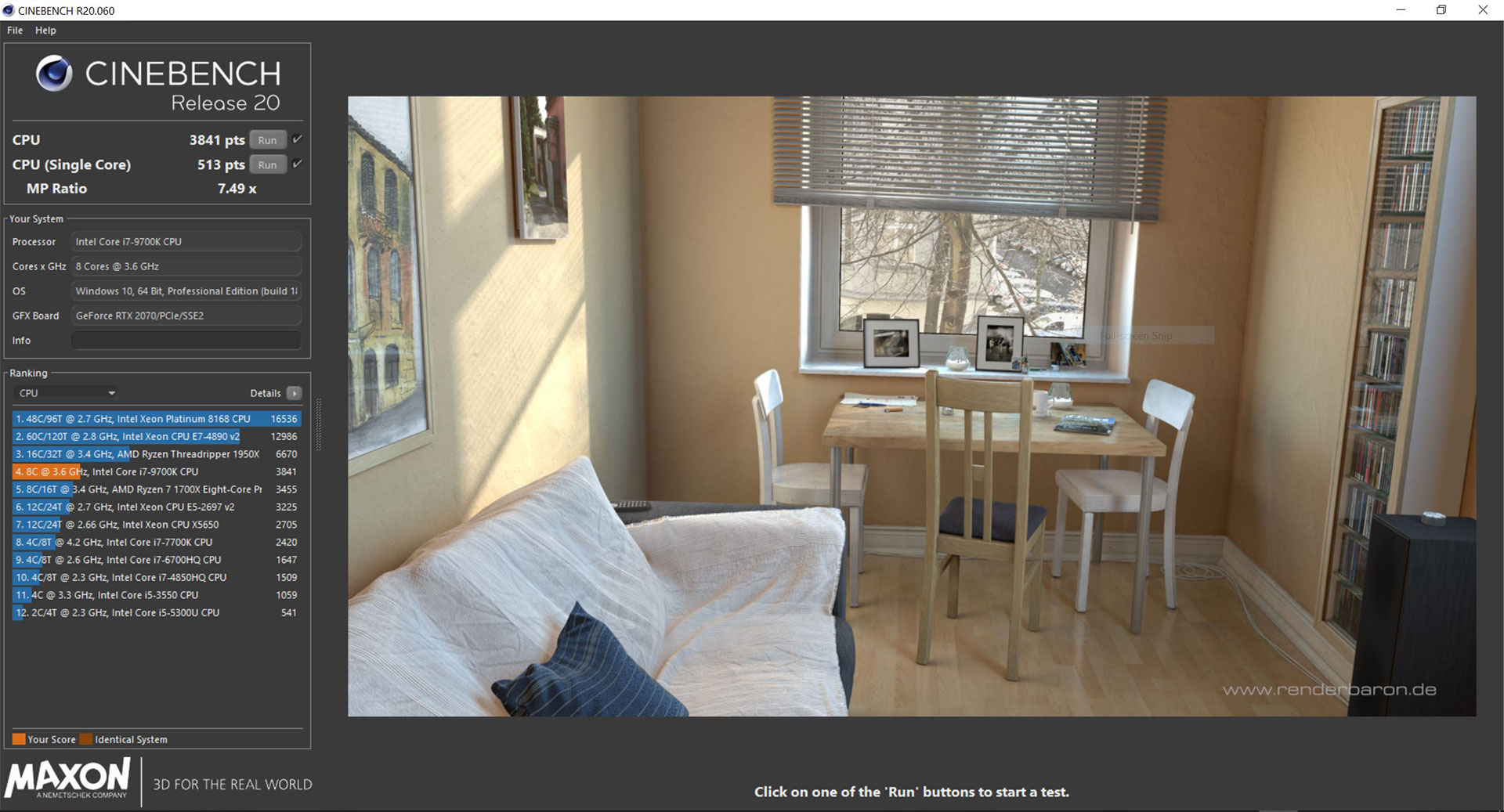 The right CPU, a difficult decision

I’ve written, before, that there is no “absolute best CPU” for all your video and photo editing needs, so choosing between AMD and Intel is always a compromise, depending on what you need and the size of your bank account. The tests at Puget Systems, which I continue to use as a reference website and company to read about real-world usage of CPUs, GPU and computers in general, gives a clear indication, though its intensive tests, some of which users can replicate at home, using the benchmarking tools the company makes available, my assumption is true. 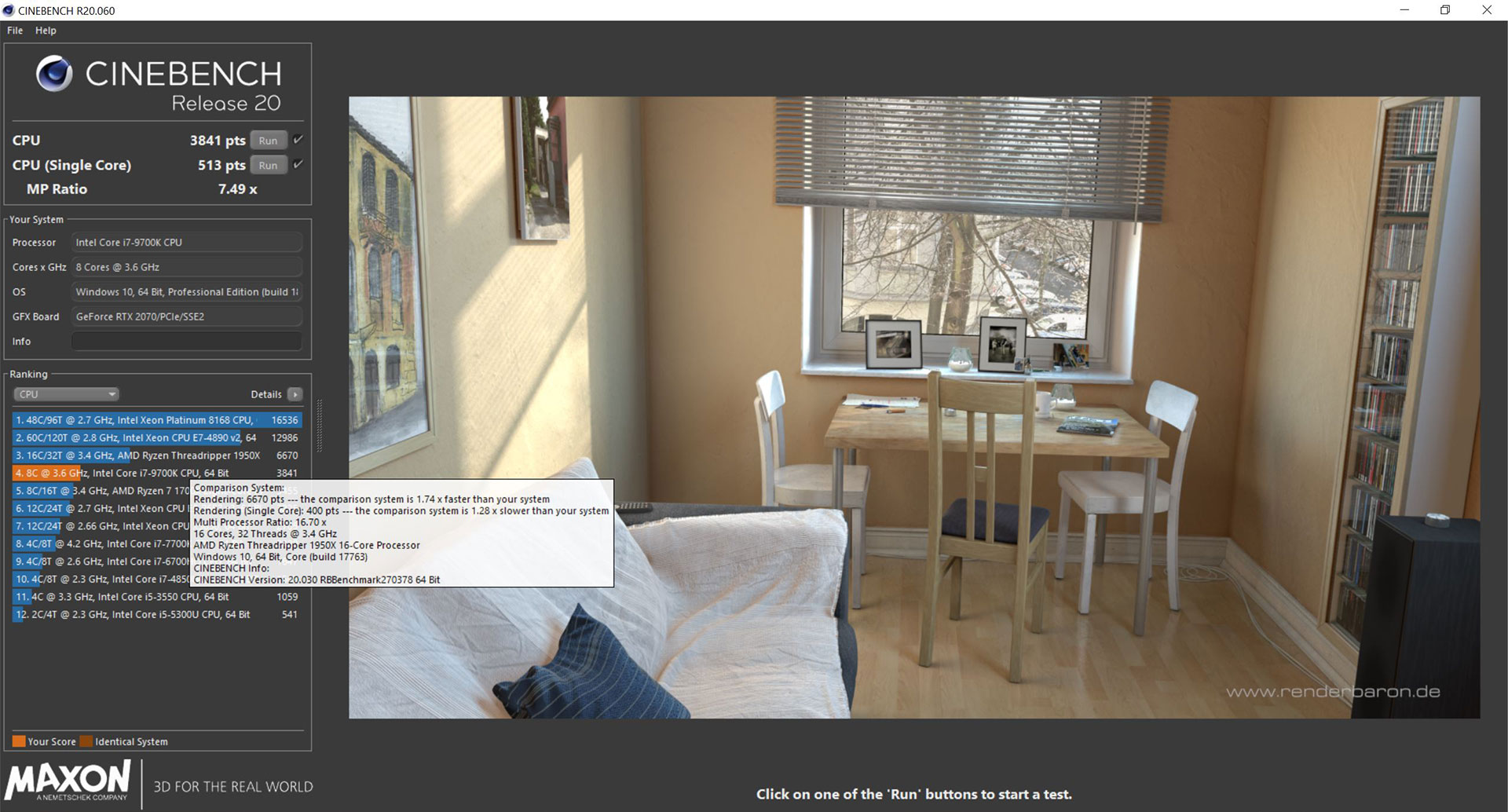 As Matt Bach, from Puget Systems, wrote on the company’s website, “in addition to being one of the more important choices, getting the right CPU is also one of the more complicated decisions” a note to which he also added, that unlike applications like Photoshop and After Effects where there is a relatively clear “best” CPU, in Premiere Pro,  for example, “there are reasons to use a wide range of processors depending on your budget and what you are doing.” This also applies to other software packages, as the industry is moving forwards, so it’s important to keep an eye on the solutions appearing everyday.

This takes us to the final notes on the DREAM MACHINE for 2020, built around a mainstream CPU, without breaking the bank and prepared to offer users a few years of absolute performance. To the specs suggested for CPU and motherboard add your preferred GPU, 32GB of fast RAM and a choice of SSDs, NVMe if viable, for OS, apps and content. Be prepared to buy a real – silent – cooler for the Ryzen 9 3900X, which comes with a nice but not very useful cooler,and you’re ready to go.

Consumers are the real winners in the battle of CPUs – I’ve written before – and it continues to be true today. Now it is time to wait for Intel’s next move. The photo and video editing DREAM MACHINE for 2020 is AMD. 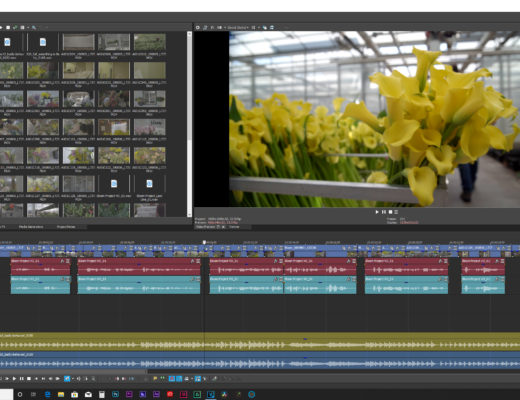 If you are focused on Media Composer, Premiere Pro, or Final Cut Pro X, then it’s easy to forget... 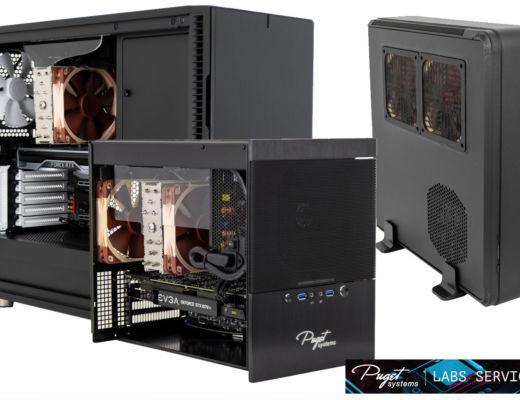 Even if you don’t buy a workstation from Puget Systems, you can get their expertise through Puget Labs, the... 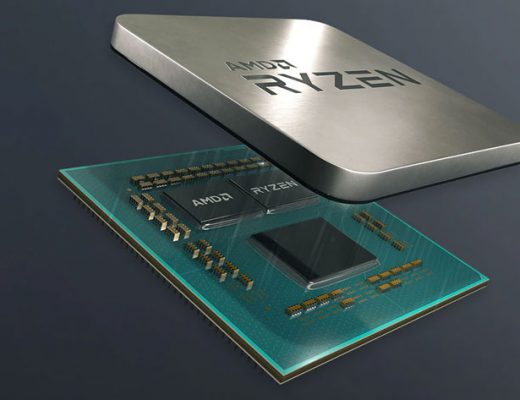