The new AMD Ryzen 9 3950X uses its 16 cores to make performance in both Premiere Pro and DaVinci Resolve go to a whole new level, reveal the tests made by Puget Systems. 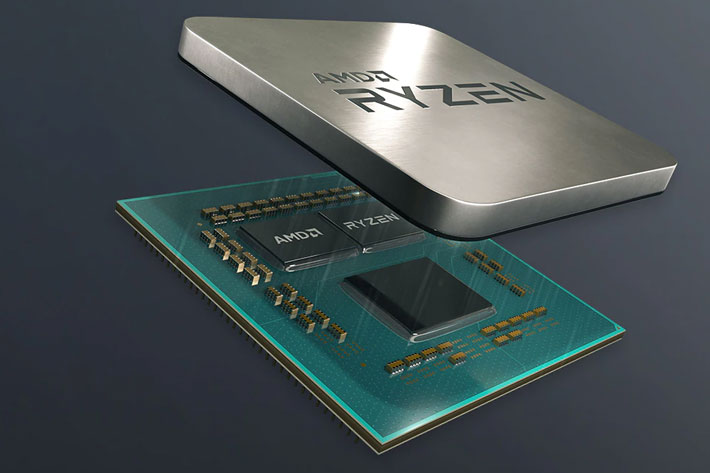 If you’re willing to pay the price – 50% more – the new AMD Ryzen 9 3950X is the CPU of choice to use with Premiere Pro or DaVinci Resolve. But the war is not over, as Intel has new CPUs coming out soon.

The recently announced 32-core AMD Ryzen Threadripper 3970X and 24-core 3960X processors deliver unmatched performance with no compromises for creators, developers, and enthusiasts, with up to 90% faster performance in Cinebench R20 nT, up to 47% more performance in Adobe Premiere Pro and other record breaking numbers. While the numbers are impressive, they will have to be compared to those users get in the real world. Another CPU from AMD, the AMD Ryzen Threadripper 9 3950X will be available to buy on November 25th, so Puget Systems decided to see how the 16-core performs and see if it is faster than Intel’s 9th Gen CPUs.

“We discovered that even though integrated graphics was enabled on the 9900K, Premiere Pro was not properly utilizing Quicksync to accelerate H.264/H.265 performance. Clearing preferences and re-installing Premiere Pro 2020 fixed the issue, and we have updated the results to reflect the performance of the Core i9 9900K with hardware acceleration enabled. This does not dramatically change the conclusion, but it did greatly reduce the performance gap between the Core i9 9900K and the new Ryzen 9 3950X.” 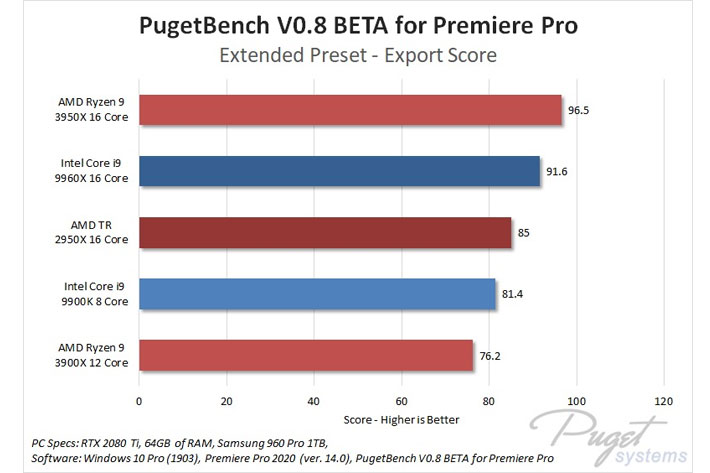 So, the initial performance gap between the Intel Core i9 9900K and the new AMD Ryzen Threadripper 9 3950X is less than the numbers that first made everyone get excited, something that may be a hint for other reviewers whose tests presented a huge gap between the two CPUs. Still, as Puget Systems indicates in their conclusions, “all in all, the AMD Ryzen 9 3950X is an absolutely terrific CPU for Premiere Pro.”

The more cores a CPU has, the faster Premiere Pro runs, so Adobe’s software takes advantage of the 16 cores present in the AMD Ryzen 9 3950X. According to Puget Systems tests, “overall, it is about 17% faster than the Ryzen 9 3900X or about 13% faster than the Intel Core i9 9900K. Against the HEDT offerings from Intel and AMD, it edges in front of the Intel Core i9 9960X by a few percent and beats the Threadripper 2950X by 9%.” 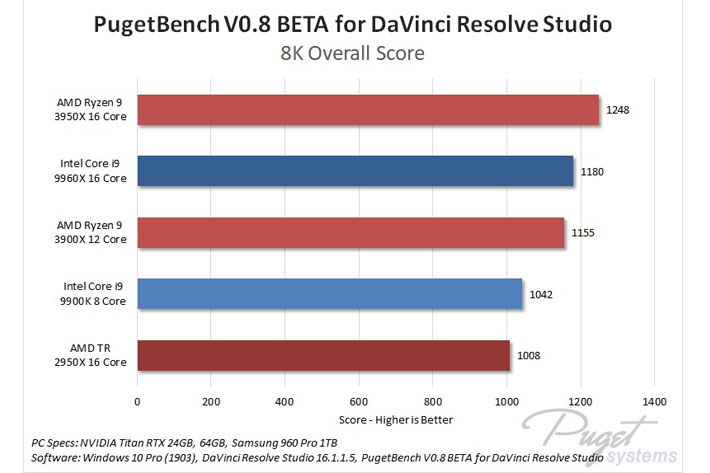 A solid choice for DaVinci Resolve

Despite the correction to the initial tests, Puget Systems still concludes that “for many users, that is well worth the 50% increase in MSRP, and makes it excellent in terms of both overall performance and performance for your dollar.” The AMD Ryzen 9 3950X has a $749 launch price, against the Intel Core i9 9900K 8 Core price of $499, so it really is up to users to define if they need the extra speed introduced by AMD’s processor.

Tests results for DaVinci Resolve indicate, according to Puget Systems, that “the AMD Ryzen 9 3950X is a very solid choice for DaVinci Resolve.”  The reviewers note that “while more complex grades in Resolve often depend more on the power of your GPU than your CPU, for relatively basic grading and editing the 3950X can provide up to a 10-20% increase in performance over the Ryzen 9 3900X or a 40-50% increase in performance over the Core i9 9900K. In exchange for just a $250 higher price tag, that is a pretty good return on investment!” 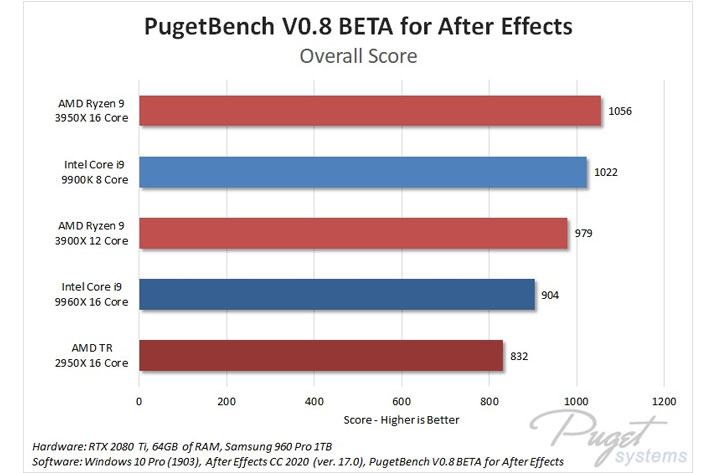 The fastest CPU for After Effects, but…

Again, a CPU does not make a whole machine, so it is wise to read not only the articles published by Puget Systems, but also the comments, where some other aspects of building workstations for video and photography editing appear. It’s always interesting reading, as it points to different real world experiences from users.  Puget Systems also cautions users that the benchmark results are strictly for Premiere Pro and DaVinci Resolve and should not be used to define how AMD’s CPU works with other software packages. In fact, the company already has articles covering other software, including After Effects, Photoshop and Lightroom Classic.

We present here the conclusions for the tests, but suggest readers to read the original articles, to get a complete picture of the benchmarking for each software package.  According to Puget Systems, “the AMD Ryzen 9 3950X is currently the fastest CPU available for After Effects. However, it is overall only a few percent faster than the Intel Core i9 9900K which may make it hard to justify since the cost is much higher. But if decreasing render times is one of your goals, it is a solid 10% faster than either the Core i9 9900K or Ryzen 9 3900X.” 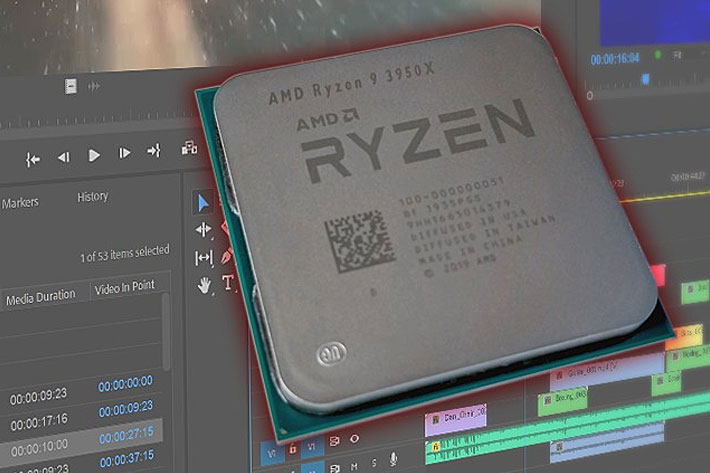 Photoshop users should know that “Overall, the AMD Ryzen 9 3950X is the fastest CPU we have tested for Photoshop to date but it is worth keeping in mind that the Intel Core i9 9900K is quite a bit less expensive while only being about 2% slower. Even if you wanted to stick with AMD, the Ryzen 9 3900X is about the same price as the 9900K, and is only about 7% slower than the 3950X.” With Lightroom Classic, the AMD Ryzen 9 3950X offers an extra 5% performance over the AMD Ryzen 9 3900X for a 50% increase in cost, which is likely to be hard to justify for most users.

The numbers do show that the 3950X further solidifies AMD’s lead over Intel but while the battle may be won, the war is not over. Both Intel and AMD have new processors coming out in the coming months, so the price/performance picture may change. With Intel’s upcoming 18-core Core i9-10980XE, things may change again, but what can we expect from the 32-core AMD Ryzen Threadripper 3970X and 24-core 3960X processors? In the end, as I’ve written before, it’s consumers who always win.

As for Puget Systems, they will have, in a near future, new benchmark tests to share with users, so everybody can test their own computers. The company also announced that they have already qualified the AMD Ryzen 9 3950X  “for use in our product line. The supply of brand-new hardware is often limited when it launches, but we fully intend to offer this CPU in our workstations as soon as we are able.” So, if you want to build your next workstation around this new AMD CPU, check Puget Systems’ website.