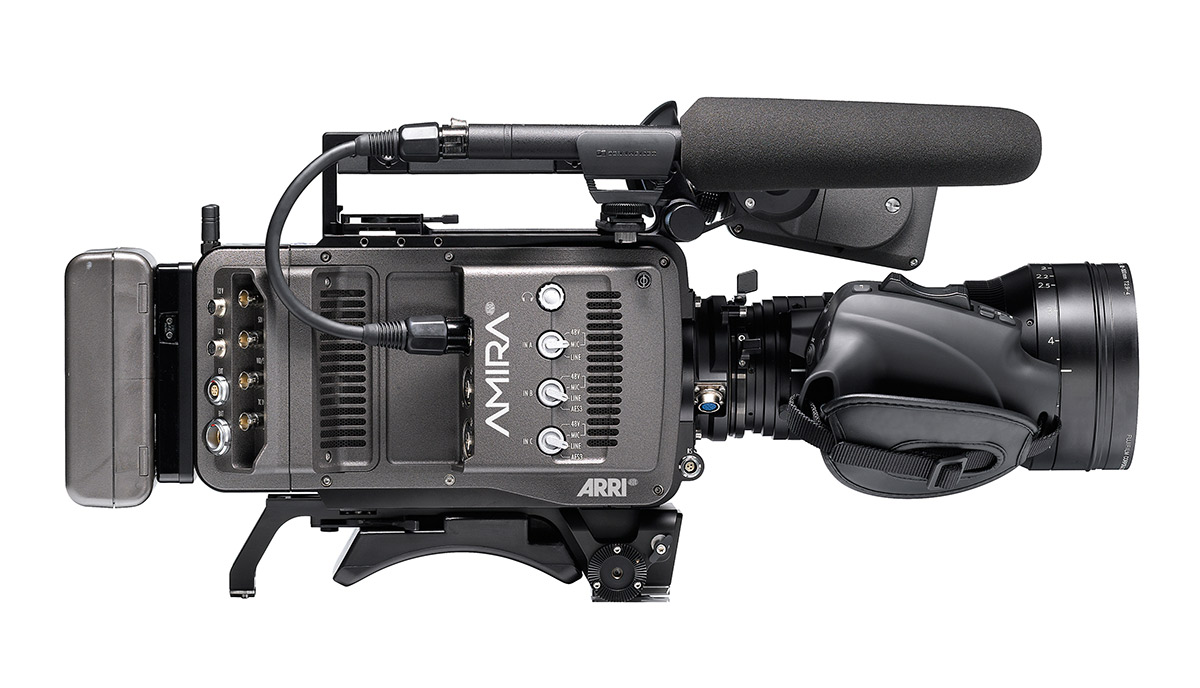 In a surprise (maybe even a shock) announcement today, ARRI released a statement outlining their intention to enable 4K recording in the recently released AMIRA.

I don't often use the term “droolworthy” with regards to a camera, but for me the AMIRA does fall into this category, along with cameras like the Leica M-P Type 240.  As someone who often shoots alone, a camera like the AMIRA which provides excellent ergonomics for the one-man-band, is a dream piece of kit for documentary and corporate work.  It seems that particularly with documentary work, production companies are becoming more and more fixated on capturing footage in 4k, even if the initial delivery of the product is destined for HD.  The BBC for example, have been shooting much of their wildlife documentaries on the RED Epic in recent years.  This seems to be feedback that ARRI have received from many people and indeed one of the BBC's own filmmakers who tested one of the first cameras, Sophie Darlington, said of the AMIRA on newsshooter.com “I think many wildlife production companies will be waiting for a 4K version to satisfy the pixel pickers.”

Today ARRI released a statement (which you can read in full below) detailing their plans to enable a 4k recording mode in the AMIRA.  This isn't a sensor upgrade though, this is in-camera interpolation of the current image which then saves, in real-time, a ProRes UHD (3840 x 2160) image right to the CFast 2.0 cards internally at up to 60fps.  This is done using ARRI's Open Gate mode that we've seen in the ALEXA XT, and then applying a 1.2x up-sample to that footage.  Considering the high quality of the AMIRA footage in the first place, even up-sampled to 4k, the results should be pretty good.  Pricing for the upgrade has yet to be announced, and I would definitely take ARRI's claims that it will be “affordable” with a pinch of salt!

For some people, particularly the aforementioned wildlife crews,  the limitation of 60fps will surely be a deal-breaker for calling this the perfect solution.  What it does represent though, is the first time that ARRI has acknowledged that there is a real demand for 4k and that they are going to have to provide solutions for it if they are to stay in the game.  The gates have opened….. what's next ARRI?

(August 26th 2014, Munich) – A new software upgrade for ARRI’s documentary-style AMIRA camera will allow it to record ProRes UHD files, answering the 4K requirements of some productions. The upgrade is expected to be available for purchase at the online ARRI License Shop by the end of 2014.
DELIVER ANY FORMAT
While widespread adoption of 4K or UHD for broadcast is still a long way off, an increasing number of content owners are becoming concerned that they ought to safeguard the longevity of their programs by ensuring that they will be suitable for UHD transmission, should that become a standard in the future.

For those productions that do need to generate UHD deliverables, AMIRA will now offer the ability to record all ProRes codecs in Ultra High Definition 3840 x 2160 resolution directly onto the in-camera CFast 2.0 cards, at up to 60 fps. This feature, activated through an affordable software license (and a sensor calibration for existing AMIRAs), comes in response to feedback from AMIRA customers, some of whom have been quizzed about 4K deliverables by clients. It is made possible by the camera’s exceptional image quality, its processing power, and its reprogrammable system architecture.

Whether a production is pursuing a UHD workflow all the way through to distribution, or simply wishes to archive in UHD in order to future-proof itself against industry developments, AMIRA now offers an easy solution that requires no additional processes in postproduction.

IN-CAMERA PROCESSING
The ALEXA/AMIRA sensor has repeatedly proved its ability to deliver outstanding image quality for the 4K or even IMAX theatrical releases of high-end feature films such as Gravity, Maleficent and Iron Man 3. This proves that the ALEXA and AMIRA camera systems are already future-proof and more than suitable for the next generation of distribution formats.

For major feature films, an up-sample to 4K can be carried out after visual effects and other postproduction tasks have been completed at 2K resolution. For certain fast-paced AMIRA productions, however, there may not be the time or resources for such processes in post, which is why a 4K or UHD output direct from the camera has been requested.

SAME GREAT IMAGE QUALITY
Outputting UHD broadens the distribution options for the superior image quality that has helped make AMIRA, and ALEXA, such a success. The wide, 14+-stop dynamic range remains unaltered, as does the accurate colorimetry, natural skin tones, and organic look and feel. By making that high-quality image data coming out of the sensor compatible with higher spatial resolution formats, the UHD upgrade answers the concerns of certain regions and productions about a 4K future, allowing AMIRA to be used on any project, no matter what deliverables are required.

Markus Duerr, ARRI’s Product Manager for the AMIRA system, says, “Feedback about AMIRA from all over the world has been overwhelmingly positive and it is clear that the camera is already a great success, being used on an amazing variety of challenging productions. Already acclaimed for its phenomenal image quality, ease of use and versatility, the new ProRes UHD output will take these benefits even further, adding value for customers in areas like China, where 4K is a major focus of industry attention.”

Wildlife cinematographer Rolf Steinmann, who was nominated for an Emmy Award this year in recognition of his work with ALEXA on the BBC’s Wild Arabia series, is currently using his AMIRA on a movie for Disney Nature. He comments, “For cameramen like me who own their gear, the UHD upgrade is a great way to stay future-proof. From now on when there's pressure from the production side to deliver UHD, I can continue to work with AMIRA and won't have to compromise on image quality or on the camera's robustness and reliability.”


About ARRI:
With headquarters located in Munich, Germany, Arnold and Richter Cine Technik (A&R) was founded in 1917 and is the world's largest manufacturer and distributor of motion picture camera, digital intermediate (DI) and lighting equipment. The ARRI Group comprises a global network of subsidiaries and partners that covers every facet of the film industry, including worldwide camera, grip and lighting equipment rental through ARRI Rental; turnkey lighting solutions through the ARRI System Group; lab services, postproduction and visual effects through ARRI Film & TV; and film distribution through ARRI Worldsales. Manufactured products include the ALEXA camera system and AMIRA documentary-style camera; Master Anamorphic lenses; L-Series LED and M-Series HMI lights; Pro Camera Accessories; and ARRISCAN archive technologies. The Academy of Motion Picture Arts and Sciences has recognized ARRI’s engineers and their technical contributions with 18 Scientific and Engineering Awards.