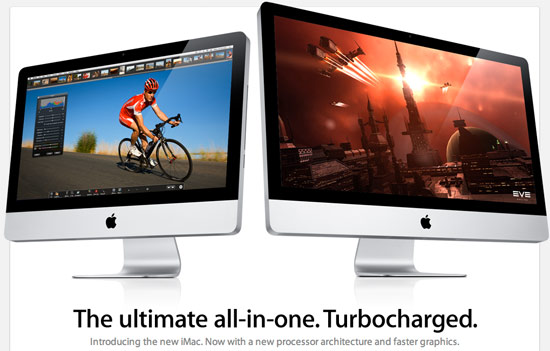 So Apple has rolled out their latest round of iMacs. I recently finally updated my trusty black MacBook to Snow Leopard, and disappointed myself when I’d forgotten that I can’t run the latest Final Cut Pro on it at ALL. So revisiting these iMacs, how are they for running the Final Cut Studio suite? And beyond can they, should you consider it as an editing platform?

Apple rolled out new iMacs today – short version – OK for video editors? Yes, but ONLY if the following criteria are met:

Read on after the jump for all the specs, options, my buying recommendations, and what iMacs are suitable for what editing operations.

only core hardware option is 4 or 8GB of RAM

So that $200 buys you the bigger, higher res screen is all – but that’s worth having! If you are cutting 1080 res footage (and shouldn’t you be if reading this?), being able to display the footage full size, while still having room for timelines, dock, menus, bins, etc. is WELL worth it.

So for that last $300 bump, you’re getting the quad core and a better video card – money well spent to nearly double your horsepower. I’d say the $200 for the bump from 2.8 to 2.93GHz isn’t worth it EDIT YES IT IS – because it isn’t just the speed bump, that also gets you Hyper-Threading – which makes a NOTABLE performance difference. Hmm. If you go Quad Core, probably ought to go with the 2.93.

I’m a bit bummed these machines don’t have USB 3.0, so clearly Apple isn’t implementing that MUCH faster bus this year. Drat.

OK – so those are the machines. What’s worth it?

If you’re doing basic basic editing and don’t have a lot of rendering to do (effects, DVD/HD DVD/Blu-ray/H.264), the base machine is pretty nice. The processor is fast enough for the ProRes 4:2:2 based work you’re doing, and the only limitations that bug me are the screen resolution adn the lack of Turbo Boost. I like space to work, and the price differential isn’t all that big – your productivity gains will justify it in no time for the better machines.

I like the 27″ model. In terms of overall productivity, I’d say having the higher res/bigger screen makes a bigger difference than the processor speed/#of cores.

If you aren’t going to get a tower, the 27″ model dual or quad core with 8GB of RAM and a 1, nah 2TB hard drive will suit you well to get some “real” work done. Note that Apple charges a hefty premium for RAM and hard drives. Updating a single drive system is a time consuming pain, but installing RAM is pretty easy. Consider third party options.

So long as you don’t need to capture from a tape based format that requires SDI or HD-SDI, and don’t need professional video monitoring (HD-SDI, true 24p support, properly video calibrated display, etc.), and don’t need anything more than FW800 based storage, the iMac will do you pretty well.

I used to recommend towers for feature editors because the storage situation was so limiting due to the drive sizes of the time. I have a 4TB, dual drive G-RAID sitting on my desk that would hold over 30 hours of 1080p24 ProRes4444, I’m not so worried about that any more.

You can even run Color on this box – the hardware is fast enough and supported.

Another big deal – with a simple Mini DisplayPort to HDMI adaptor, you can connect to an HDMI based HDTV – certainly suitable for video preview/client display, but careful calibration would be necessary before trusting the colors to be anywhere close to accurate. Another advantage of HDMI based monitoring straight off the GPU – faster frame rates than AJA/BMD based cards. VERY important for Color playback in realtime, as the image doesn’t have to go from main memory, to the GPU for GPU accelerated color correction, back to main memory, then to AJA/BMD card for output. (You can do this with desktops as well from either Mini DisplayPort or DVI).

The one place in modern editing that can be a gotcha is the export rendering – lord help you if you have a 1080p feature and need to burn a reel to DVD and only have a slow single core machine. The good thing is that, PROPERLY CONFIGURED (hello Qmaster), a quad core system is a HUGE boon when it comes time to twiddle your thumbs and wait for deliverables for DVD, Blu-ray, or H.264 for the web.

Which is why I push the quad core if you are ever going to be on deadline.

So what about drawbacks of going iMac not Mac Pro tower?

-no PCIe slots for AJA/BMD cards for professional video I/O
-no PCIe slots for Red Rocket, a RAID card, SAN integration, or any other card based expansion
-limited storage – you’re stuck with FW800 daisy chained together (and don’t even THINK about editing off USB 2.0!) For multiple streams of video, this can start to be an impediment for the beefier formats (like ProRes 4444). Only your internal drive can go faster than 80 MB/sec, at best. Seek times are a factor here too (long techie explanation omitted, but trust me, it matters).
-along those lines, you’re paying more and getting less for external storage – the same drive in a FW800 external case costs more since you have to pay for the enclosure, and is limited to 80 MB/sec. Decent SATA drives can push & pull well over 100 MB/sec these days – different from a few years ago when the performance difference was negligible or nonexistent
-If you need/want more than 8GB of RAM, RAM for these systems is more expensive than RAM for towers. Why? Fewer slots available, and bigger sticks of RAM cost more per GB.
-(somewhat) limited monitor expansion capabilities. Ideally, I like a 3 monitor setup – one for timeline and some bins, one purely for additional bins, and one for dedicated professional video preview. Can’t do that here. But you CAN do two displays now on the iMacs, which you couldn’t a few years ago. And with HDMI based LCD HDTVs, using your preview for bins is not ideal but at least possible (if you crank up the text size).

That’s what I can think of – anybody else?

So what about iMac vs Mac Pro tower?

Hmm…that’s another article to be written.

*Well yeah, you COULD use tape based formats and have pro video I/O with a AJA IO HD or KiPro – but they are about $3500 to $3700 – for that kind of money, you can literally buy a Mac Pro tower and a Blackmagic card – so “saving money with an iMac” just backfired. But you can rent an IO HD or KiPro, too. Even then, there are issues – KiPro or IO HD want total ownership of the sole FW800 port, so you’d have to record to the internal drive and have NO other drives attached.