To qualify, shows must have premiere broadcast dates in the United States between December 1, 2011 and November 30, 2012

The American Society of Cinematographers (ASC) is accepting submissions for their annual television competition. Directors of photography can enter in three categories: (1) An episode of a regular half-hour series; (2) An episode of a regular hour-long series; and (3) A movie or miniseries made for television. The deadline for entries is noon (PDT) on December 3. Finalists will contend for top honors during the 27th ASC Outstanding Achievement Awards at the Hollywood & Highland Grand Ballroom on February 10, 2013. 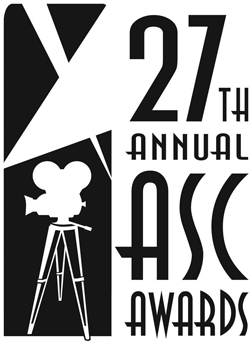 To qualify, shows must have premiere broadcast dates in the United States between December 1, 2011 and November 30, 2012. Entry forms can be downloaded from the ASC website.

“The television awards celebrate the visual achievements of cinematographers who create captivating images for serialized stories under tremendous time and budget pressures,” says ASC President Stephen Lighthill. “Our goal is to showcase some of the best work being produced in these demanding categories.”

The ASC was chartered in January 1919. There are more than 300 active members of ASC, and 150-plus associate members from sectors of the industry that support the art and craft of filmmaking. Membership and associate membership is by invitation based on contributions that individuals have made to advance the art of visual storytelling.